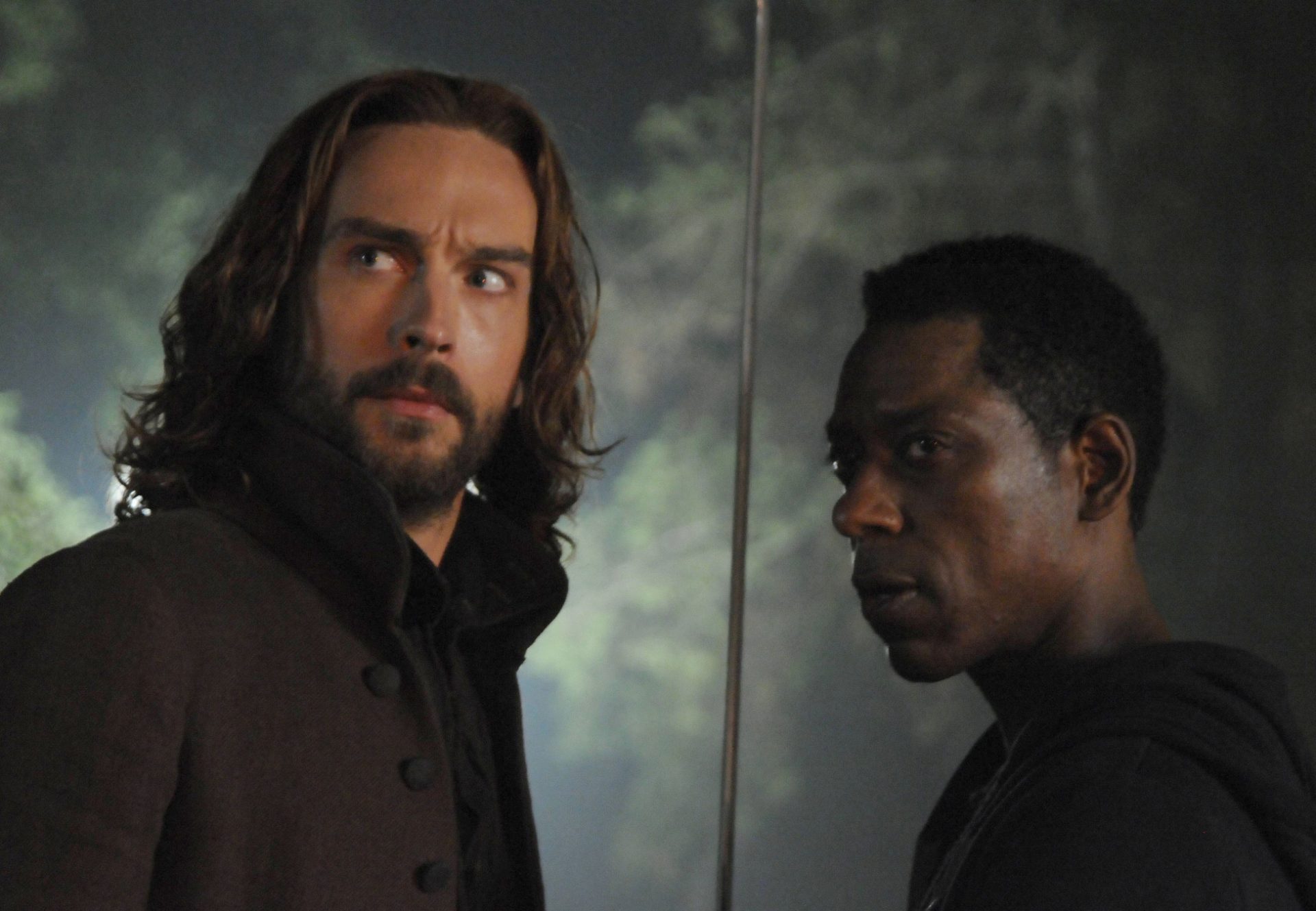 I’m still salty over the events that happened in the winter finale.  While there were some solid emotional moments and humor, other parts left a bad taste in my mouth.  I thought where they ended made sense even if I wanted a different outcome.  On to the recap! 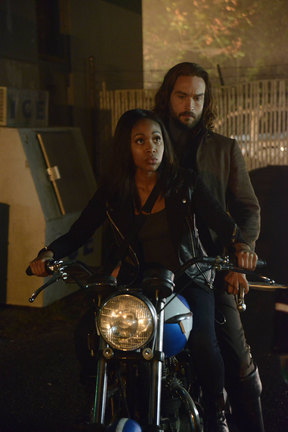 We pick up where we left off, with Abbie and Crane in possession of the sword and on their way to Henry’s house. A well placed lightning strike hit Abbie’s car and it sputters dead.  The mechanic unfortunately isn’t able to fix it right away.  With time being of the essence, the witnesses look for another working vehicle to drive, and Ichabod spots a motorcycle. He is cautious at first and is confused when there isn’t a seatbelt but has to hold onto Abbie instead.  Once they arrive at Fredericks Manor, Crane is so excited he wants a motorcycle after they take care of business.  The house is quiet and dark and Abbie and Ichabod search the house where they discover Henry’s miniature town model of Sleepy Hollow.  When they connect the dots using red thread with the places Henry has made power moves it draws a pentagram.  Abbie saw a similar one in Moloch’s lair when she was in purgatory. Hearing a shout from Katrina, Abbie and Crane go outside.

They see Katrina bound and gagged to posts surrounded by fire.  Looks like Abraham is going through with the binding ritual!  Crane with Enoch’s sword cuts Headless’ ax and points it at his chest. Katrina is still able to see Abraham because of the necklace. She says a spell which lets Crane and Abbie see Abraham as well. Abraham warns that using the sword to kill him will also kill Crane. Abraham’s reference of magic costing was very similar to Once Upon a Time.   Katrina thinks he’s right, especially after seeing runes light up on the sword referencing Elim’s angels agents of earthly justice.  She needs time to prove or disprove Abraham’s statement. Abbie thinks Abraham is trying to stall but they wind up listening to Katrina.

Red lightning flashes in the sky in Sleepy Hollow, and we see the Witnesses have imprisoned Abraham again in the dungeon. Katrina binds him in the chains even more using magic.  Jenny will let them know soon whether her research proves Abraham is lying or not.  In the meantime Katrina will continue to question him to find out what else he knows.  Crane is not comfortable with it but knows that it’s necessary.  While Katrina saved Abraham for the time being, she also saved Crane.  Jenny buzzes Abbie, she has found information.

Abbie and Crane head back to the cabin where Jenny is at.  Jenny has found text that proves Abraham was right.  If men use Methsulah’s sword their soul will be consumed by fire. Abbie theorizes that both her and Crane would have to use the sword to defeat Moloch since he will more than likely have Henry with him and they would need to use it twice.  Abbie is concerned that Crane would not kill Henry if it needed to be done.  Jenny suggests that they use someone who’s soul is already claimed.  Irving! 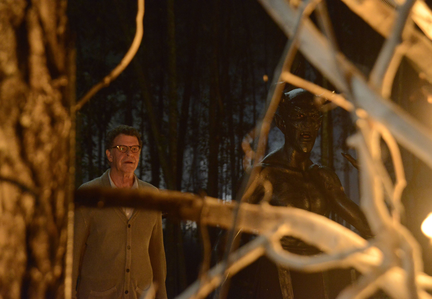 Henry has taken Moloch to where he was raised from the grave. He calls it his true birthplace with Moloch as his real father.  Moloch begins his rise by burning a white tree.  Crane comes back to the dungeon in time to overhear Katrina tell Abraham she cares for him. Ichabod asks Katrina if Jenny’s theory holds water and she thinks it does.  He tells her they are going to find Irving.  She wants to stay to see if Abraham will finally open up. Riiight. Katrina apologizes for not saying goodbye before going back to Frederick’s Manor.  Crane understood why she left that way.  He asks her if she would be able to kill Henry if there was no other way of getting to Moloch.  She responds that there is always another way.  So my guess is the answer is no.

Ichabod goes back to the cabin, where we find out Abbie has found more information about the sword. It appears to be adjacent to the story of Abraham asked to sacrifice his son Isaac. Abbie reminds Crane that Henry is definitely not as innocent as Isaac.  Crane has decided to kill Henry if it becomes necessary, but doesn’t relish the task.  Jenny gets Abbie and Crane to listen to Irving’s voicemail message. In it Irving leaves a date: September 23, 1780.   Crane knows what happened that day: three patriots caught a spy and sent him to a garrison post in Sleepy Hollow.  According to Abbie there are tunnels near a military outpost.  Crane asks Abbie to go to the dungeon to Abraham and Katrina while he goes with Jenny to find Irving.

Irving is found in the tunnels.  Jenny and Crane explain their theory about the sword and asks for his help.  He thinks if he dies while helping them Henry will have his soul. Ichabod points out that Henry could have his soul regardless if he helps them or not. Irving has Jenny promise him to take care of his family if something happens to him.  He goes with them back to the dungeon to question Abraham.  Abraham was surprised to learn Henry had Irving’s soul and looked weary. He finally tells them where Moloch is and explains the burning of the four white trees in the forest. The first tree brought lightning. The second blood. The third, Moloch’s army from purgatory. The fourth, hell on earth according to Crane. Katrina tries to spare Abraham again thinking he would be of use later. Crane reasons that Moloch is more important right now. Jenny suggests they weapon up since Irving has the sword and they may need to face an army.  Where was Abbie? I thought she was supposed to be there already babysitting Katrina and Abraham? 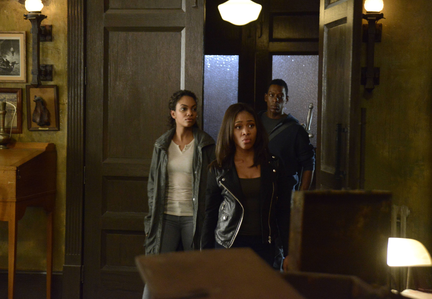 Jenny goes with Crane to see Hawley about those weapons.  He initially doesn’t believe her that this could be “the” apocalypse but once it starts hailing blood, changes his mind.  At the archives Hawley starts distributing his arsenal of weapons.  Katrina starts adding power to the weapons and mentions that as purgatory merges with the human world her power weakens.  That explains what happens later somewhat.  Abbie is back with the horseman. Hawley finally sees for himself the Horseman of Death.  He agrees to babysit Headless and potentially fend off demons trying to rescue him while Abbie and the rest of the team try to defeat Moloch.  At the archives Crane and Katrina get into a very unforgiving argument where Katrina feels Ichabod no longer trusts her judgment while he questions their marriage based on her being a spy, witch, and lying about what happened with Mary (Weeping Lady episode).  They both agree that for this mission they will both be comrades in arms to each other, nothing more. Abbie, Jenny, and Irving walk in just as Crane and Katrina finish arguing.  However Abbie and Jenny feel the tension in the room. 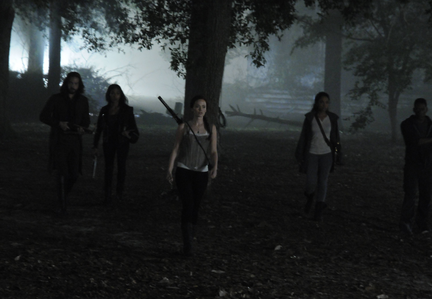 The third tree burns and Moloch berates Henry for not preventing team Witness for getting the sword.  Moloch tells him it’s time to send his purgatory army and the knight armor guy connected to Henry.  Team witness starts fighting with the army.  Abbie gets shot minutes into the battle, so is taken away by Jenny.  (That irked me.) Irving and Crane with a little help from Katrina kill some of the soldiers, when the knight of war arrives.  Irving says he has this. Katrina goes to help Abbie. Crane watches as Irving fight the knight like there were no other soldiers walking around that could shoot him at any time.  Irving does pretty good for an amateur swordsman when he gets severely injured.  He has enough strength to still defeat the knight, who collapses in a sea of lava goo.  Crane and Katrina try to stop the bleeding from Irving’s wounds but to no avail.  Irving succumbs to his injuries and dies.

Team witness, especially Abbie is devastated by this loss.  Abbie and Crane vow that Irving’s death will not be in vain.  Crane, Abbie, Katrina, and Jenny are each willing to pick up the sword if the other person falls to try to win against Moloch.  This scene was still emotional. Abbie has a plan.  Moloch wants Henry to distract Team Witness at the church and have him retrieve the sword.  He reminds Henry when he protests that he is replaceable as a horseman and he should be grateful to sacrifice himself to Moloch’s glory.  Henry looked perturbed and in denial, but obeys.

Henry goes to the church.  He quickly makes quick work of Abbie and Jenny by binding them with roots. Ichabod and Katrina again make an attempt to ask Henry to step aside so they can confront Moloch.  The story of Abraham and Isaac is brought up. Abbie tries to encourage Crane to kill his son.  Henry uses the ruse that he’s touched Crane never gave up on him but takes the sword away from Crane and points it at Katrina.  Caught again! 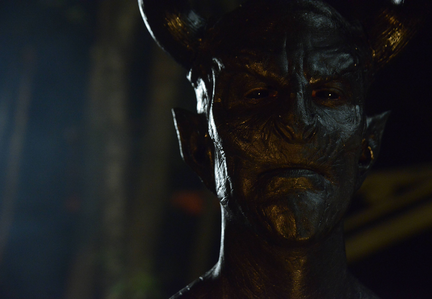 Team Witness is now bound up on trees.  Katrina is bound to the last white tree to get burned. Moloch wants Henry to kill her.  Henry thought that she would still be spared for Abraham but Moloch says he failed so he gets nothing.  Moloch makes it worse by calling both Henry and Abraham nothing.   Henry is about to kill Katrina when Ichabod speaks up to take him instead.  Henry then goes to him and brings up that God as a deity is not worth worshipping if he would make someone sacrifice his own kid.  Not only this a father willing to sacrifice his son is worth killing. Thinking Crane is about to get the death blow, everyone is shocked when Henry turns around and stabs Moloch with the sword instead.  We end the winter finale with Moloch lighting up red and disintegrating.

What did you think of the winter finale?  What were your favorite parts?  Do you think Irving will come back? If so how? Sound off below in the comments!

TVTalk with Natasha and Kimberly Ep 50