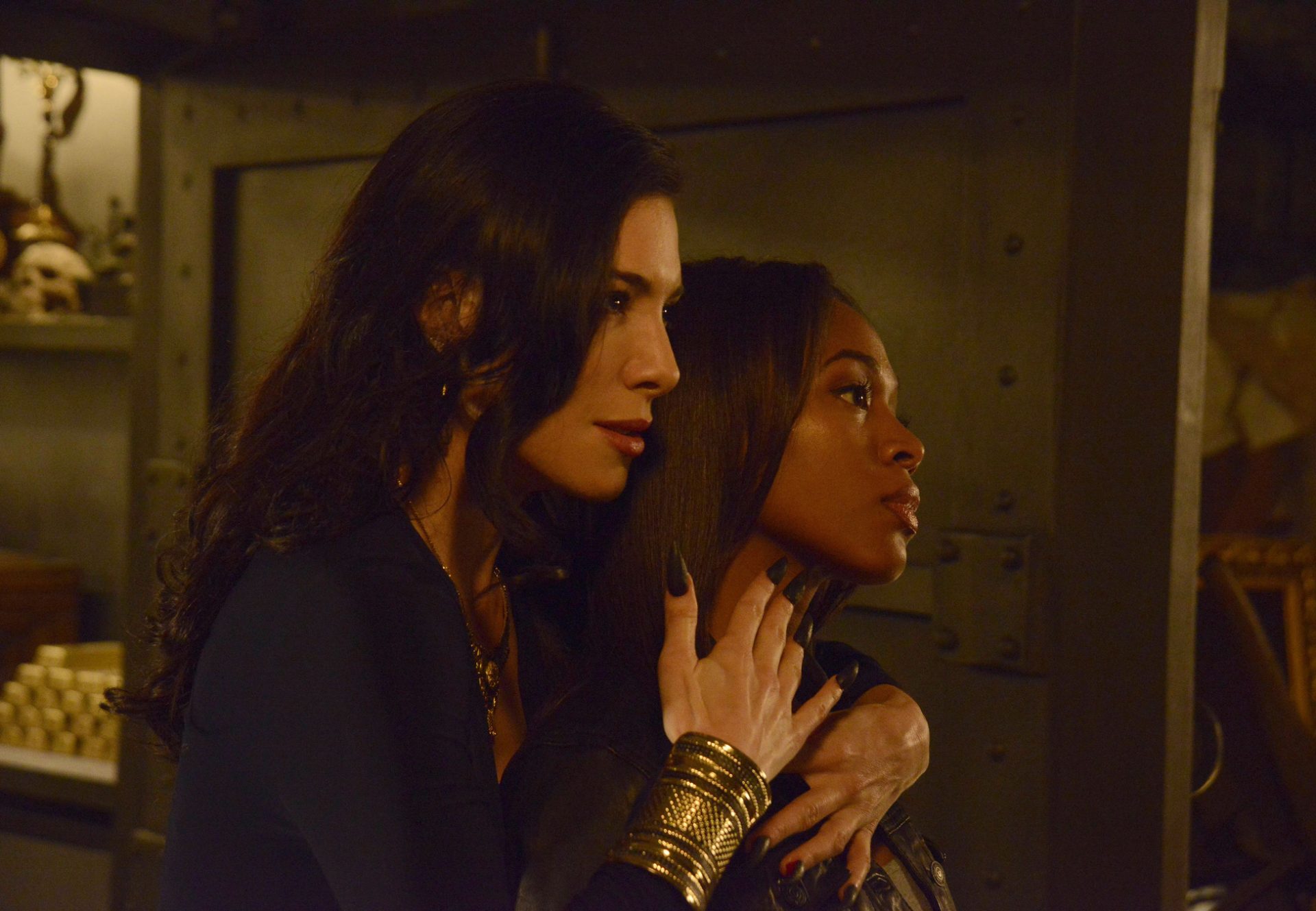 Hawley gets some back story in this week’s episode where Team Witness has to rescue him from someone from his past. 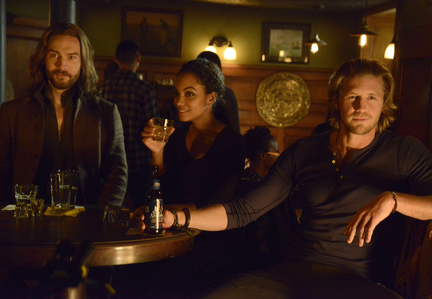 The evening starts out light enough with Abbie singing karaoke. She has such a nice singing voice! Ichabod, Jenny, and Hawley cheer her on.  Jenny indirectly brings up angels but Ichabod says that Abbie and him have moved past the whole Orion situation.  Jenny has observed that Team Witness have not spent as much time together recently.  Hawley has to leave because of an acquisition of some artifacts.  He reassures Jenny that he will be back shortly.  From the looks Jenny and Hawley gave each other it looks as though Jenny is reconsidering the wishy washy man.

The person Hawley really winds up meeting with is Carmilla Pines (Jaime Murray), someone who helped raise him. He’s been avoiding her for a decade.  She wants him to help her with a job.  Hawley declines but Carmilla mentions that the other people she called on are either dead or serving time.  She also pulls the “my life is in danger” excuse.  The job: break into Theodore Knox’s estate.  When Hawley refuses again Carmilla reveals her sharp teeth and glowy eyes. She informs Hawley he owes her a debt and she’s coming to collect.

Back at the bar, Crane is now on stage singing.  Jenny asks Abbie if everything is okay between her and Crane.  Abbie reassures her that they are fine. The tables get turned when Abbie asks what’s going on between Hawley and Jenny. Jenny admits something is there and is concerned when Hawley doesn’t respond to her texts and phone calls considering he wasn’t going to be gone long. After Crane’s performance Crane sees the concern and wants to investigate.  But Abbie gets an alert that the archives have been breached!  I’m surprised this hasn’t happened more often.

Hawley Borrows from the Archives

The archives definitely looks ransacked.  As Abbie and Ichabod start looking around, Jenny sees a shadow move towards the door.  She rushes out and encounters Hawley.  He tries to warn her away and he will explain later.  He mentions “she is desperate” but Jenny doesn’t listen. She winds up confronting Carmilla who quickly throws her down.  The woman  is about to do some serious damage to Jenny when Crane shoots her in the chest.  Carmilla then transforms to her true monster self.  When Abbie tries to draw her away some more with fire, the monster proceeds to disappear in the tunnels leaving a pile of acid around the arrow that pierced her.

Abbie had the venom analyzed without telling Crane.  He figures out based on acidic venom coming from the claws that it is a vetala.  The creature is an undead human that serves the Hindu Goddess of death and regeneration Kali.  Abbie wants to question McKenna, the guy that Hawley was supposed to meet whereas Crane wanted to look for the missing item that Hawley took.  They agree to do both by Abbie having Jenny come along to McKenna’s while Crane enlists Katrina’s help at the archives. 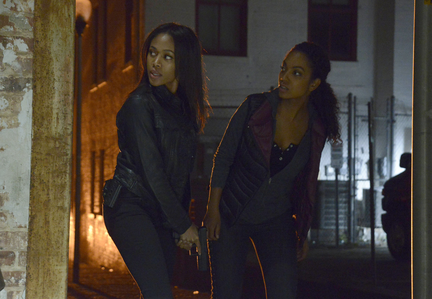 Abbie and Jenny tag team McKenna into answering their questions regarding Hawley.  Jenny was such a good “bad cop”! They learn that it was Carmilla that set up to meet with Hawley.  Jenny knows about Hawley’s history with her.  Ms. Carmilla is a more ruthless treasure hunter than Hawley.

Back at the archives, Crane explains to Katrina about Mary Poppins.  Katrina comments that modern witches haven’t progressed much.  Crane finds the charm Orion gave Abbie.  She never told him about the charm. Interesting. Katrina explained that it was a beacon which troubled Crane.  The Mills sisters come back to inform Crane that Carmilla is their vetala.  She was a foster mom to Hawley when he was a teen.  Crane figured out that Hawley took the original architecture designs of Knox’s mansion made by the Sons of Liberty. Mr. Knox collects antiques and occult items and stores them in a vault built by his ancestor Henry Knox.

According to Hawley, the vault can be accessed using a lever lock system. Carmilla asks about his friends but he avoids answering by saying that she doesn’t have to worry about them.  Hawley asks how she became the creature.  She explains she was looking for him when she was caught by a Thuggee death cult and turned into the vetala.  She shows him the mark they put on her back. X marks the spot.  She tells him that there is an artifact that could turn her back to human.  Hawley reluctantly helps her when she pleads with him.

Crane drives the sisters to Knox’s house using Hawley’s car.  Ichabod likes the horsepower.  Jenny gives a little more background on Hawley and Carmilla.  Ms. Pines was Hawley’s godmother and helped raise him after his parents died.  He didn’t want to talk about it much with Jenny but she got the impression that he missed his foster mom.  Hawley, Carmilla, then Abbie and crew get into the black market exchange party thrown by Theodore Knox with some artifacts of their own. 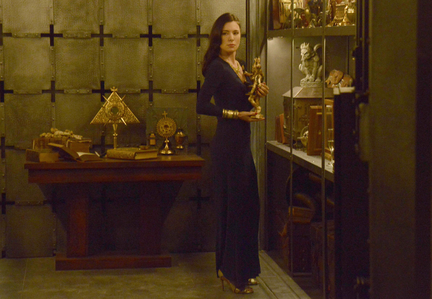 Abbie, Crane, and Jenny spot Hawley and Carmilla at the party.  Abbie asks Jenny to follow Hawley while her and Ichabod trail the vetala.  Before Ichabod goes far, he is stopped by Mr. Knox himself who gushes over his crossbow.  Abbie goes inside by herself.   Hawley finds the levers to open up the vault in another room. Jenny finds Hawley demanding to know what Ms. Pines is after. Hawley doesn’t answer her and distracts her enough to take her cell phone and lock her in another room. Jenny’s pissed!

Where’s R2D2 when you need him?

Carmilla finds the golden artifact of the Hindu Goddess Kali in the vault.  Abbie gets into an acidity situation when she gets held hostage by Carmilla after failing to shoot her.  Ichabod finally makes it to the party and tells Carmilla to let Abbie go. Hawley also makes it to the standoff.  He convinces Ms. Pines to lock Abbie and Crane in the vault which will give her and Hawley enough time to get away. Carmilla doesn’t trust them.  He assures her they will not come after them.  Hawley even pulls a gun on Crane to convince Carmilla he means business.

In the vault, Crane tells Abbie he recognized the statue, and it is used in a dark ceremony to turn people into vetala. Just great! Crane and Abbie discuss their communication being off.  He brings up Orion’ s beacon.  Abbie apologizes for not telling him.  Team witness manages to get out the vault by Crane pressing the gold symbol button.  They almost became shish kabob when Crane initially pressed the wrong one which made one of the walls close in with sharp spikes.  There was a Star Wars reference! Jenny meets them outside.  Crane clues her in on Carmilla’s plans.

I want to be a Vetala! Not!

I knew Carmilla was lying! Now Hawley is in danger of becoming that creature.  Hawley tries to convince her to stop but she doesn’t listen.  She likes moving real fast, having acid producing claws, and gross sharp teeth! Fortunately she turned her henchman into vetala before moving onto him.  Crane and Abbie figure out how to kill the creature by combining fire and iron. Yay! It appears they have their mojo back. They both kill the henchman and Jenny comes to the rescue for Hawley just as Carmilla is performing the spell.  Jenny gets thrown around some for her efforts.  Hawley is about to finish off Carmilla but she runs.  Carmilla is still on the loose! 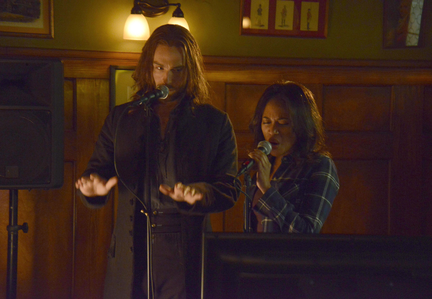 Hawley comes to say goodbye to Jenny at the archives.  He is going to hunt down Carmilla. Jenny would like to come with him but she is needed in Sleepy Hollow.  He kisses her goodbye.  Back at the bar Abbie and Ichabod do a duet to “Proud Mary”. Ichabod’s got a nice deep bass singing voice.

What the heck is up with Irving?

At court, Irving with his wife Cynthia (Jill Marie Jones) representing him (I’m really trying to remember if they even got a divorce) is surprised to learn that the state is not pursuing charges against Irving, despite the fact that he was a fugitive.  Not only this but based on new evidence the judge exonerates him of all charges! We still don’t know what new evidence was brought to the surface.  It’s highly suspicious.  Irving looks relieved though so in a way this is a blessing.  Irving seems genuinely shocked and surprised.  In the courthouse Cynthia gives him a strange look when he mentions he’s finally coming home to her and Macy. 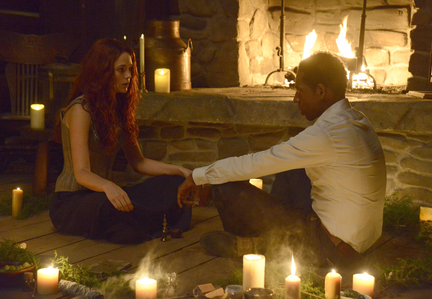 Cynthia has concerns about Henry still having a hold on Irving.  He is just happy to be alive.  She suggests that they go to Katrina to see if Irving has his soul.  They wind up following Abbie’s advice and talk with Katrina at the cabin. Katrina performs her supernatural examination but before she does she asks where is Henry. Irving denies knowing where he is.  Alternative motive much Katrina?  She tells Irving and Cynthia that he is in the clear.  Now I’m not so sure considering Katrina wants to look for Henry.  Irving hugs his wife but when he looks out the window he does not see his reflection! What the heck?

What an interesting episode.  Hawley’s background explains why he is a little commitment shy.  I did not appreciate Jenny being thrown around alot by the creature of the week.  She did get a few good punches in but not much.  Are the witnesses now in sync? Can we get more karaoke please? What are your thoughts regarding Irving? Katrina is definitely up to something. Will Hawley return at some point to Sleepy Hollow? What does this mean with his relationship with Jenny? Sound off below in the comments!