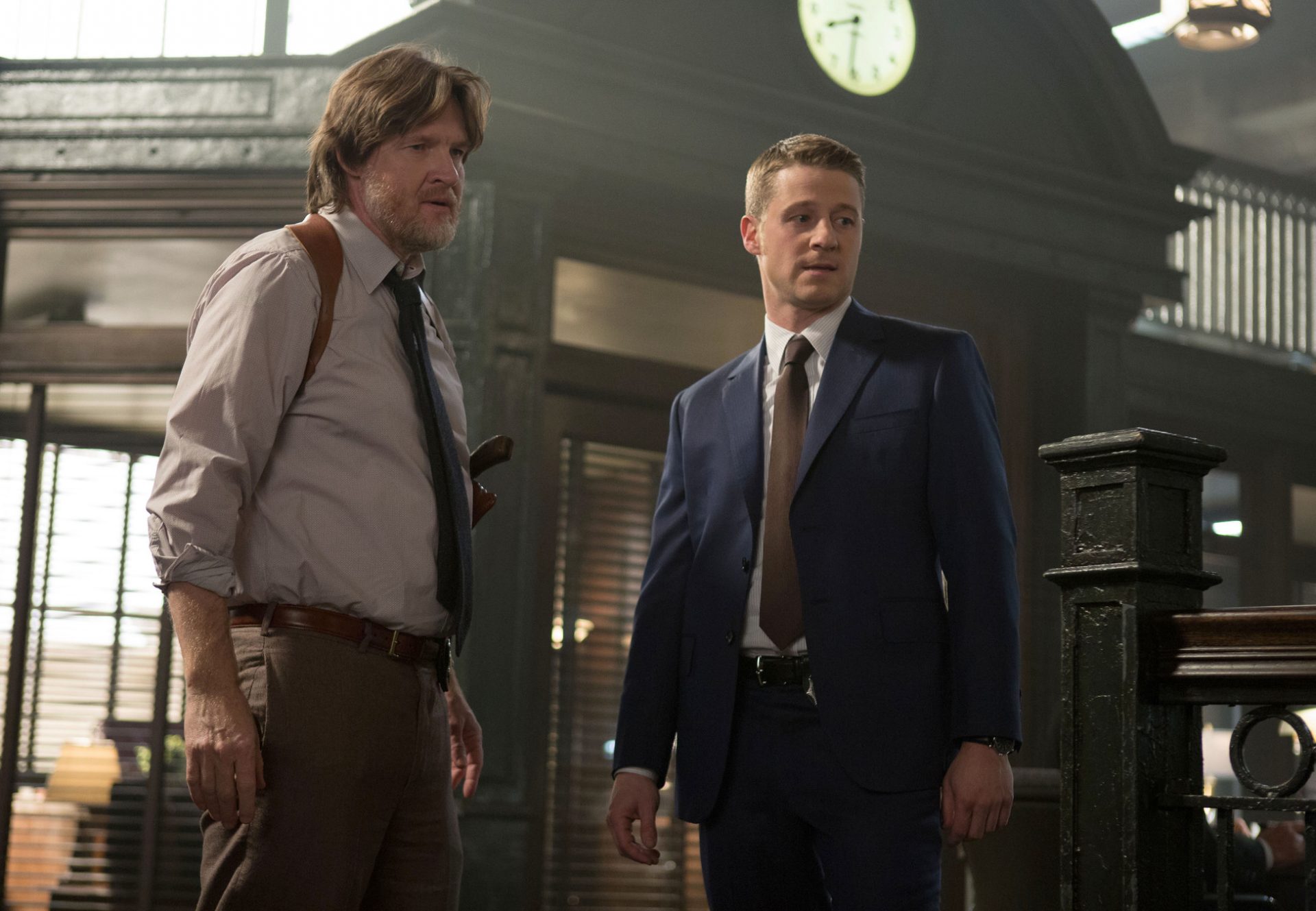 Gordon is looking for a snake in the grass at the GCPD and Bruce comes back from out of town in this week’s episode of Gotham.

We start the episode with Fish being brought to an area of a warehouse to be tortured by Bob (Michael Eklund).  Her arms are strapped above her head and she sits in what looks like a dentist chair.  We learn that Fish’s real name is Maria Mercedes Mooney.  Bob reveals he has two daughters.  He tells her he will be extracting an apology like it’s an actual medical procedure.  When she taunts him about his daughters being ugly, she gets slapped with the clipboard.  She spits at him for calling her Fish.  Butch is out around town looking for her. When suffocating Fish doesn’t work, Bob is about to hammer out her knee when Butch comes to the rescue. Butch tries to convince Fish to leave town but she will not rest until she kills Penguin.  Bob gets shot by Zsasz for his failure. Bob was the worst torture person ever. 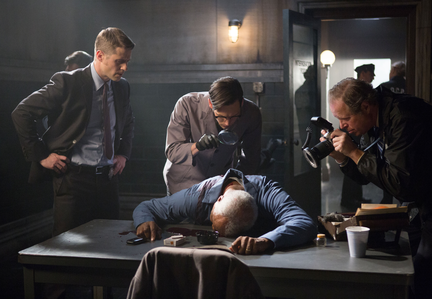 While Bob was attempting to torture Fish, Gordon meets with Bullock at a crime scene. Bullock casually mentions James’s smooch with Dr. Thompkins.  Gordon denies it by saying it was business.  So is that how he conducts business now? Making out with psychiatrist? Gordon is sorry to hear about what happened to Fish. Bullock thinks she may still survive but she knew the game.  Gordon is introduced to Detective Arnold Flass (Dash Mihok) of narcotics.  He was tipped about the victim, a drug dealer named Pinky Littlefield from the crew Uptown Assassins.  Flass thinks it was a deal gone bad.  He didn’t find any drugs on him when Gordon asked.  Bullock walks away with Flass and Gordon finds some drugs in the victim’s boot where the heel was a hidden compartment.  A witness, night janitor Leong Winkler (Willie C. Carpenter), steps forward to make a statement.  Gordon tells him to stop by the precinct to talk to a sketch artist. The poor witness (whose wife supported his decision to come in mind you) gets stabbed in the back with an ice pick in the interrogation room before talking. He did admit before he got stabbed that he saw the murderer.  I don’t want to think about “Basic Instinct” right now.  Gordon vows to find out who murdered the poor man. Nygma figured out the murder weapon, and that it was used to kill Littlefield as well.  Bullock mentions the security cameras in the room and outside the room were turned off.  Gordon thinks it’s an inside job. The Captain requests that he try to handle it quietly. Essen just wasted her breath.  We are talking about Gordon here.

James starts interrogating some of the other officers about the missing entry in the log book and who was on duty around the time of the murder.  Gordon asks Bullock for some leverage to use in questioning which he provides reluctantly.  One of the officers cracks when Gordon tries to pit him against another officer.  Detective Derek Delaware (Niko Nicotera), the one who guarded the interrogation room, tries to leave, but Gordon catches him.  He searches his car and finds drugs in the trunk in the spare tire. James is setting a precedence by bringing Delaware in and putting him in a cell for all of the other officers to see. 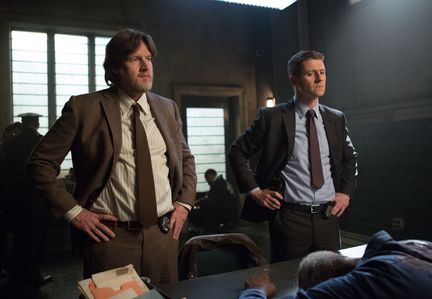 Captain Essen takes Gordon and Bullock off of the case and turn it to Internal Affairs because of what Gordon did.  Gordon scoffs at this because the two guys are drunks.  Detective Flass reveals that he had an undercover drug operation for months.  The stunt Gordon pulled may have put those officers in danger if word gets out.  Right Flass, you just look all kinds of shady.

Nygma in the meantime is still continuing to woo Ms. Kringle, this time with a greeting card. Flass finds it and makes fun of Nygma in front of his cronies and Ms. Kringle.  She apologizes to Nygma about what happened and thought his card was thoughtful.  She did stop him from asking her out. Baby steps, Nygma, baby steps.

Bullock tries to warn Gordon about Flass who is running the drug market.  He says that the detective is protected by big money folk.  Gordon of course throws caution to the wind. He convinces Bullock to try to raid one of the stash houses for evidence against Flass and his cronies.  They find Delaware and a crew of officers.  Delaware produces a warrant to investigate and seize any inventory from the “Uptown Assassins.” Flass won that round.  The warrant was signed by Judge Bam Bam.

Captain Essen informs Bullock and Gordon that internal affairs ruled Winker’s death a suicide. The widow is at the police station to get his body.  Gordon is upset because she deserves justice. Essen thinks the Commissioner is involved but can’t move forward without something solid.  The only murder Gordon can solve at this point is Littlefield’s.  There are good cops that want to help but Gordon needs to produce before that happens.  Gordon looks again at Winkler’s wife, and he leaves. He tells Bullock he will be back in like an hour.

Bruce looked for Selena by having Alfred drive around her haunts.  He saw Ivy and asked her to give Selena the message that he was looking for her.  Ivy demands $20 to pass the message which Alfred pays. Later on Selena answers the summons and comes to Bruce in his study.  Bruce gives Selena a gift, which is a snow globe, from his travels to Switzerland. It looks like this is the first give Selena has ever received. She seems touched.  When Bruce casually asks if she would like to stay to help him find his parent’s killer and live with him, Selena switches to protection mode.  She lied about not seeing the killer of his parents and to stop bugging her. Bruce looks heartbroken when she leaves. He throws the snow globe on the floor. Alfred tells him to move on by sweeping up the glass. Bruce vows to get more leads on his own. 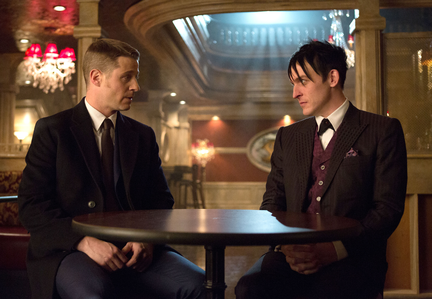 Gordon goes to Mooney’s club to see Penguin.  He is introduced to Momma Cobblepot and it gets awkward.  He asks for Penguin’s help in his investigation against Detective Flass.  He knows that Maroni runs the drug trade.  Penguin offers to make some calls.  Gordon does request that no one gets hurt trying to find information. When Gordon asks what he could do for Penguin in return,  Penguin responds that he did it as a favor between friends so Gordon doesn’t owe him.  Gordon warns Penguin that he doesn’t own the club yet. James looks like he’s wondering what he got himself into.  Gordon eventually leaves.

Earlier, Penguin brings his mother to Mooney’s club as a surprise.  There are still some minor details to take care of before he “officially” owns the club.  His mother is happy for him.  She finds Liza’s scarf and thinks Penguin got it for her. Sad.  Mom gets tipsy and needs an escort home.  After Gordon makes his request, Penguin has his own celebration by drinking a bottle of wine.  Just when he makes an announcement on stage, Mooney walks in with Butch holding a baseball bat. Penguin kisses her boot. On his knees, he proposes that they combine forces to take over Gotham. No one would expect it. Mooney laughs in his face.  She calls him a nobody. That sets Penguin off spouting that for a nobody he outsmarted her.

Mooney on the Run 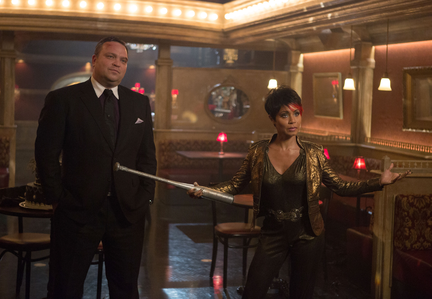 They are interrupted by Zsasz and his female gang.  Butch helps Mooney escape. He gets caught by Zsasz who wants to play with him at home.  I think he would be better at torture than Bob. Mooney and Bullock are by the pier.  She will leave town for now but come back to get her revenge on Penguin.  Bullock tries to get her to stay out of town.  She asks that he try to find Butch and rescue him if possible.  Bullock and Mooney share a kiss.  So he does have feelings for her! Bullock leaves and Mooney walks away.

Penguin’s henchman gets a confession from Delaware that Flass killed Littlefield. He delivers the evidence, including the murder weapon to Gordon.  Gordon confronts Flass in front of the other officers.  He reminds them that they are supposed to protect citizens. Flass broke that trust when a citizen tried to help them solve a case.  Essen and other take Gordon’s side this time and arrest Flass. Later on Delaware catches Gordon outside the precinct and begs him not to hurt his family.  Gordon looks shocked and dismayed about what he is hearing.  Did he really expect Penguin’s men would not use any means necessary to get the evidence?

Definitely enjoyed the episode this week, even with Bruce just because we caught up with him after his ordeal.  What did you think of the episode? When will Penguin be the official owner of the club? When will he make his power move? Sound off below in the comments!

How to Get Away with Murder S1 Ep 10 Recap: Hello Raskolnikov

Sleepy Hollow S2 E15 Recap: “Spellcaster” Has a Bad Side, Who Knew?