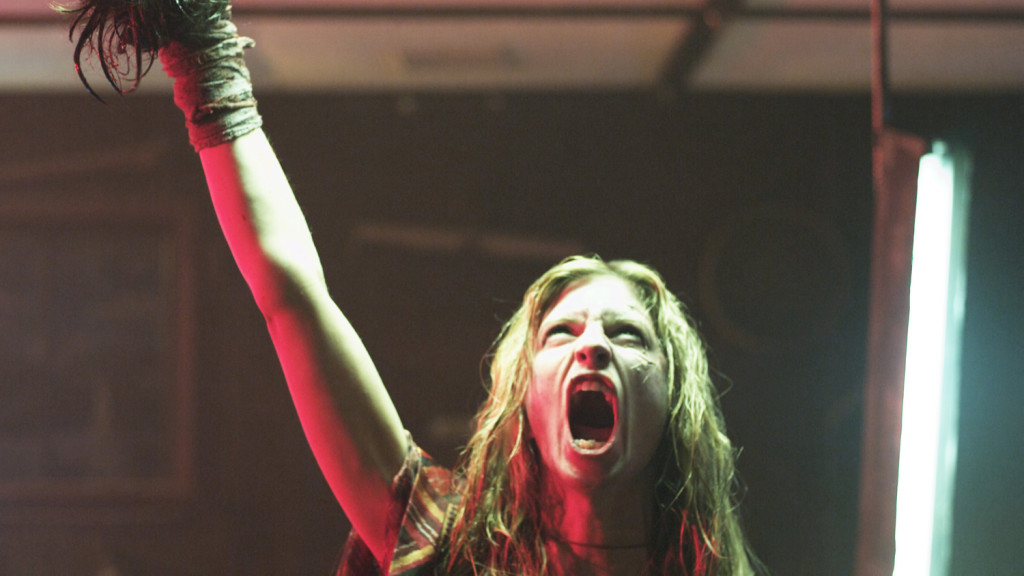 When Avenged star Amanda Adrienne first came back to Los Angeles after graduating from the University of Minnesota with a degree in English and Photography, she worked at the American Apparel warehouse as a sales coordinator, then became a model for the brand. She then moved from modeling to acting, appearing in short films/videos such as “Eldad” and “Dreams of Solace,” and on web series such as “Ben and Burman.”

In 2011, Adrienne appeared in two films, in a small role in Bobby Khan’s Ticket to Hollywood and as the lead actress in Le Chapeau. Director Michael S. Ojeda’s Avenged (formerly called Savaged) is her second starring role, one for which she trained in martial arts in order to portray Zoe, a deaf/mute girl who is brutalized by racist thugs, then possessed by an Apache warrior himself bent on revenge against her attackers. Adrienne briefly discussed the role and her acting background with The Nerd Element.

The Nerd Element: What attracted you to the role of Zoe?

Amanda Adrienne: I would say two major things. Her journey moved me on a gut level, and Michael’s passion and vision for the project was incredibly inspiring.

TNE:  Zoe goes through some extreme situations in the film. How did you prepare mentally and emotionally for those scenes?

AA: I studied acting technique at Ivana Chubbuck Studios and Playhouse West, so I have things I do prior to even getting on set that help me and things that I do on set. The rest is just letting go. Being surrounded by solid actors and supported by an amazing director and crew obviously helps, too. It’s one of the reasons I love filmmaking. It’s so collaborative.

TNE: What training did you do for the action sequences?

AA: I took Wushu classes for nine months during the time between shooting the trailer to get financing and the actual movie. I also did some archery lessons at Tapo Canyon Park, and worked with the stunt choreography team and Michael on specific fight sequences. I can remember being in my apartment just practicing, picking up the bow, drawing an arrow, and seamlessly putting it in and drawing it back over and over again. Michael gave me the actual bow and arrows we would use in the film to take home and practice with.

TNE: When did you know you wanted to be an actress and how did you go about pursuing it as a career?

AA: I’ve always had a predilection for story-telling—be it through words, images, or acting. I can remember telling my mother that I wanted to be an actress at eight years old and being obsessed with make-believe. It was probably more of a survival skill then because I didn’t know how to deal with my emotions and was incredibly shy. As a teenager in Minnesota, I would write plays to put on in the basement of our house and shoot movies with our little camcorder. But outside of my family, I didn’t really pursue it.

It wasn’t until I had an acting class my final year of college that I was kind of like—this is what I’m supposed to be doing; this is where I feel most alive. When I didn’t get a job at a big advertising firm in Minneapolis, I moved to Los Angeles for a screenplay coverage internship instead. That’s where I would say the real acting journey began—where I got serious and started taking classes and doing short films little by little.

TNE: What’s been your most challenging acting role so far and why?

AA: Definitely this one from both an emotional and physical standpoint.

TNE: Anything I haven’t asked you that you’d like our readers to know about?

AA: You can find me on Instagram and Twitter @amandaadrienne, and I hope you enjoy the movie.

Avenged is currently on video on demand and in select theaters.