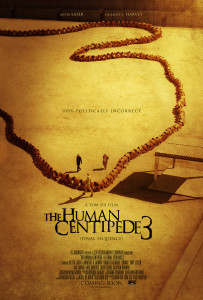 In 2010, director Tom Six unleashed The Human Centipede (First Sequence) on the world. It was a curiosity, more than anything; a tale about a virulently misanthropic doctor (Dieter Laser) who, tired of his career separating Siamese twins and mad with hatred of humanity (or something), decides to create his own being, first by stitching together his three Rottweilers, then graduating to people. It was gross and strange, and it made some people downright angry.

In 2011, Six followed it up with The Human Centipede II (Full Sequence), a meta-commentary on the first film that upped the gore and grotesqueness in response to supposed fan wishes for such, only to undercut fan desires by shooting in black and white and making the story grim, dark, and dreary (also vile, reprehensible, and disgusting). Here, a mentally deranged man (Laurence R. Harvey) who is obsessed with THC1, which is revealed as only a movie, decides he’s going to make his own human centipede. Lacking the necessary surgical skills, the man’s efforts are predictably heinous.

Now, in 2015, Six inflicts the last punishment—er, installment—of the series with the horror/comedy The Human Centipede III (Final Sequence), in which we learn that THC2 was also only a movie. THC3 is more excessive in its meta-commentary, as well as in its acting, violence, and gore, and while there are some amusing bits, the film is ultimately naught but exploitation for exploitation’s sake.

THC3 brings back actors from 1 and 2 for its shenanigans. Laser plays William “Billy” Boss, warden of a prison named after George H.W. Bush. Boss has gone insane from the disrespect he gets from the prisoners and the governor (played by Eric Roberts, who is clearly having fun in his cameo), and constantly thinks of various ways to torture the prisoners who have caused him such—in his mind—undeserved angst.

Harvey plays Dwight Butler, the prison’s accountant and Boss’ right-hand man. Butler, having seen the first two Centipede movies, tries to convince Boss that sewing all the prisoners together into a “human prison centipede” will be cost-effective, deter others from committing crimes, and is generally an all-around good solution to Boss’ problems. The prisoners are referred to solely by numbers and not names, already dehumanized before Boss accepts Butler’s crazy idea.

Let’s be honest; no one’s going to a Human Centipede sequel looking for great art or transcendent horror. They’re going for the gross-outs, the hammy acting, the outrageousness, and whatever other depravity Six thinks up and plasters onscreen (including sexual degradation this time). In a meta-commentary above the meta-commentary, Six appears as himself and witnesses something so revolting that he vomits. It’s played for laughs, sure, but that doesn’t make the observation any less accurate: Almost all the sex and violence presented in THC3 is nauseating.

The acting varies from the bemused (Roberts) to the stilted (Bree Olson as Boss’ abused secretary, Daisy) to the over-the-top (Laser). Laser, whose mad Dr. Heiter in the original was the best thing about that picture, is so amped that his performance, intentionally funny in the beginning, becomes wearying; Boss is a raving lunatic who rarely speaks in anything approaching a normal tone, bludgeoning the audience with his every word.

I won’t lie; I found some parts of this film genuinely humorous. But while I’d like to think the atrocities in THC3 are meant to make its audience think harder about what it demands in a horror film, the sheer repugnance of the acts is far too off-putting, and the odd pacing slows the proceedings to a crawl far too often. Judging from the positive responses to the set-pieces from several in the crowd I saw it with, however, any deeper meaning is certainly not clear—if it’s there at all.

The Human Centipede III (Final Sequence) wriggles into theaters and VOD on May 22, 2015