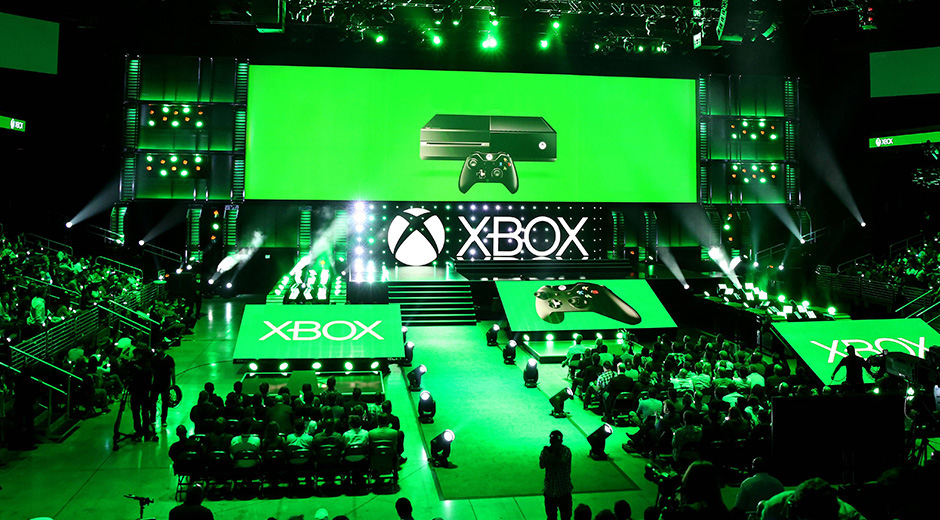 We start with a trailer showing many famous Xbox characters set to the music of Man of Steel.

Bonnie Ross, head of 343 Studios comes to the stage. Introduces a trailer and gameplay footage Halo 5: Guardians starring Nathan Fillion. More and more, we have recognizable Hollywood actors playing characters in the games. Not just voiceovers.

Josh Holmes, also of 343, comes out and announces major updates to the multiplayer. “This is Warzone.”

Xbox Exclusive World Premiere. A woman walks across a barren wasteland with a robotic dog. Seems like a mixture of Enslaved and Borderlands. Recore.

Phil Spencer, Head of Xbox, announces backwards compatibility on Xbox One! This is probably the biggest moment of the press conference. Starting this holiday season, we will be able to play Xbox 360 games on the Xbox One. “We won’t charge you to play the games you already own.” If he had been holding a microphone, this is the moment he would have dropped it and walked off. Sorry, Sony, that had to hurt.

Next, we get a trailer for the new Xbox One controller. It’s nice to see Microsoft fixing their mistakes.

The lights come up to reveal Todd Howard, of Bethesda, is standing on the stage. Behind him, the title Fallout 4 covers the screen. New gameplay is revealed. It looks SO MUCH more colorful than previous versions. We now have a second screen PIPBoy that works on your tablet and smartphone. VATS is also returning. Although the most welcome thing is an actual voiceover instead of text while NPC’s creepily stare at you. And one more surprise delivered as if it were an afterthought. Mods that are created on the PC will be playable on the Xbox One version of Fallout 4.

Peter Moore, Electronic Arts comes out to give us more information about EA Access. It will be $5/mo and is exclusively on Xbox One. Dragon Age Inquisition will be added to the growing library of games playable with EA Access. It sounds like those with Xbox Live Gold membership will be able to check out the service for free for a limited time.

Next is the Forza Motorsport 6 trailer. As the lights come up, we see the debut of a newly designed Ford GT40 as it is lowered from the ceiling. Henry Ford III, yeah that Henry Ford is on stage presenting the car. And we’re shown second trailer featuring the GT40. That car is SEXY!

A new trailer for The Division is shown. Laurent Detoc, President Ubisoft America, through a HEAVY French accent, announces that there will be an Xbox One exclusive Beta…in December….UGH! Why is this game not already out? Take my money! He also gives the announcement of Rainbow Six Siege. Then we see new gameplay footage.

Beyond Eyes trailer about a blind little girl. This looks interesting.

Xbox Game Preview. Play demos of games long before their release. I don’t really see the developers being too happy about this one. Wait did he just sneak in an announcement that Elite Dangerous is coming to Xbox One?

Another Xbox One and Windows 10 exclusive fills the screen. The narrator sounds a lot like Cersei from Game of Thrones. Free to Play. Fable Legends.

Kudo Tsunoda, Corporate Vice President Microsoft Studios, is up next. That beard is glorious! He begins talking about Microsoft’s new relationship with Valve VR. An Xbox One controller will be packaged with every Oculus Rift. Xbox One games can be streamed to the Oculus Rift through Windows 10. And now they’re showing off the new Microsoft Hololense featuring a new version of Minecraft. This involves a three dimensional hologram of an entire Minecraft world and it’s projected onto a table. So cool!

Rod Fergusson, Studio Head Microsoft Studios announces Gears of War Ultimate Edition, a remastered version of Gears of War 1 through 3. We then get the Xbox One Exclusive World Premiere. Gears 4.

Phil Spencer is back closing out the presentation.

Well, lets see what Sony has coming up.