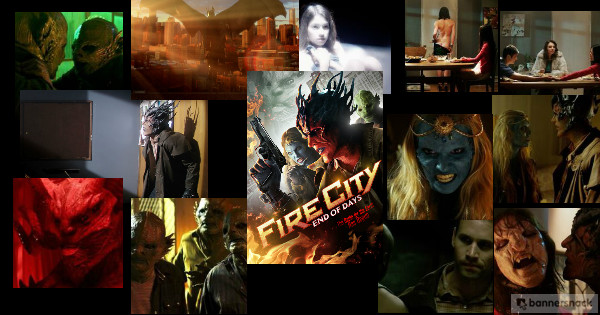 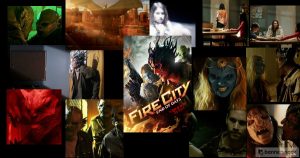 Fire City: End of Days tells the story of a demon named Vine (Tobias Jelinek), who turns out to be a savior to humans. Demons now live among humans on earth, during the End of Days, but what is affecting humans to act so diabolically within his apartment building and throughout the city? Vine uncovers a mystery that forces him to choose between his own salvation or that of a young girl, Sara (Keely Alona).

Visually the film is stunning, the incredible creatures featured in the film were created by Tom Woodruff, Jr., who has spent his career as a visual effects make-up artist, working on such films as Star Trek III: The Search for Spock, The Terminator, Aliens, The X-Files, X-Men, The Thing and most recently as Specialty Character Effects for the highly anticipated blockbuster, Batman v Superman: Dawn of Justice set to be released next year.  In 1993, Woodruff won an Academy Award for Best Visual Effects on Death Becomes Her and was also nominated that year for his work on Aliens in the same category. He’s won numerous Saturn Awards and been nominated throughout his career as a highly sought-after visual effects artist.

Fire City: End of Days marks Woodruff’s debut as director of a full-length feature film. How does a visual special effects makeup artist become director? Fire City, written by Brian Lubocki and Michael Hayes, approached Woodruff a couple of years ago. They wanted him to build a cool demon body for a movie they had in mind. Though they had done a trailer that peeked the interest of executives, unfathomably both guys were initially pushed off the project.  “No one could see the value of having the writers of the story actually involved in the movie”, Woodruff recalls. Apparently executives seemed to want to take the original story and change it around. Luckily, Lubocki and Hayes hung on to it. Woodruff offered to do all of the creatures at low cost, and asked to direct it. Although they agreed, having only done a few shorts, Woodruff was given two days to come up with a short film, so the writers could see his directing skills. “Let’s create a short film, a little 10 min film in two days of shooting. They came up with Fire City: King of Misery and it worked out really well. [It] got really good results, they liked the tone and my style of directing. With that, we went to Kickstarter, raised the money and did the prequel movie called Fire City: End of Days.”

Shooting a short film is a lot different than doing a feature film. What were some of the challenges for Woodruff as a new director, first having to tackle a 10-minute short, then turn around and direct a full-length movie? The short film had to be done in two days, so getting all the shots he wanted of the characters to be able to tell the story was key, to then later he could edit how he was visualizing it. Luckily he got what he needed. With regards to shooting the feature film, he had to overcome his lack of confidence. Woodruff explains, “It’s really intimidating have spent so much time on sets with people like James Cameron, Mike Nichols and Robert Zemeckis. You know when I think of all the directors I’ve been around and what they do, it seems so easy [and]that concerns me. Anytime something impressive seems easy I get concerned that there’s a lot of different layers I’m not aware of.” He describes he felt like one of the characters from The Wizard of Oz. “I’m the Tin Man that’s always had a heart or I’m the Cowardly Lion that’s always had some bravery, some courage.” He adds, “There were a lot of layers to it, but I was very comfortable and very well-versed in those layers and I was kicking myself for not having pushed and struggled to have done this earlier.”

The main character Vine, played by Jelinek, is clearly a tortured soul struggling within between his demon self and human self. Woodruff was thrilled with finding Jelinek, whose talent allows the audience to see the character’s heroism shine through from the beginning of the movie.

“We had some great casting in Tobias Jelinek. He had to be a stand out character as both a demon and as a human being and feel those two characters were connected, which he did an incredible job at”, Woodruff compliments.

The monsters in the film are amazing works of art. Woodruff designed all the characters in the film, then turned everything over to his son David, who was in charge of creating all the prosthetics. He then got a team together to do applications, including Academy Award winner Dave Elsey who won for his work on The Wolfman in 2010.

There are many challenges Woodruff faced in shooting the movie, especially due to time constraints and the amount of space they had to work with. One camera was used, with a small second unit that covered exteriors and minor inside shots to allow choices once in the editing room. One of the most difficult scenes to shoot was the love making scene with Vine.  Woodruff describes, “That was tough because it was a very small room, we were trying to feature his wings, trying not to be overly gratuitous with nudity.” There were a lot of moving parts to it for a scene that literally is less than two minutes in length. He describes using puppets and other props in creating the epic romp in the hay. “In the end, it makes it’s point. It’s the one scene I’m probably the most self-conscious about because it started so quick and ended so quick. I didn’t have a lot of options”, he solemnly adds.

The design of the old apartment building and apartments within, sets the tone of the movie from the very beginning. Woodruff used an apartment in an old shooting location in Los Angeles, which comes off very realistic. However, space was an issue, trying to figure out how to shoot a scene to ensure coverage and he wishes he had the luxury of working at a studio. “Would have been cool to work in a studio, to have the room to work with. It’s really a shame that so many studios are empty because there’s not enough money available in the state to keep them in use”, he comments.

Becoming a visual effects makeup artist isn’t something on a little kid’s radar, that’s for sure, so how did he end up doing this type of work? Woodruff grew up in a small town in Pennsylvania. He loved to watch all the monster movies and shows on television. By the age of 8-9 years old, he knew he wanted to do this type of work, become a monster, create them. “With nothing else on my horizon in terms of anything else that interested me, that’s where my heart and my soul went. I never wavered, never questioned it.” Although he had no idea of the success he’d have, he knew within himself it was his passion. “Passion trumps all”, he adds.

He’s modest when asked about his Academy Award win for Death Becomes Her. What was it like? “Honestly all the fun you can imagine it would be. It was great. It was fun. It was huge. It lasted one night. It was over the next morning when we had a meeting with Mike Nichols. We were working on Wolf and asked if we could come in late for a production meeting because of all the parties the night before. He said no!” I guess is true what they say…you’re only as good as your last film!

Woodruff has had the amazing opportunity to work with some of the best directors in Hollywood, including James Cameron, Mike Nichols and Robert Zemeckis. What did he learn from them? “I can’t tell you because it’s a big secret”, he jokes. “If I tell you I won’t be able to keep my job!” Very funny! Seriously though, he explains that each director have their own style. James Cameron is completely different than Mike Nichols or Robert Zemeckis. For him, being able to convey what he needs from the actors is key. “It comes down to dealing with actors. I’ve sort of developed my own way dealing with actors that I haven’t seen other people do and so far it’s been a great process.” I think because he’s got experience acting in monster suits, etc… he has a unique ability that some directors don’t have. He goes on to describe he’s been able to get something fresh from the actors because he comes at it from an actor’s point of view, ie: how would he approach it? He recalls one of the best compliments he’s received thus far. “I was so happy in one of my reviews to see [the reviewer] say I’m an actor’s director, which to me is a title that’s reserved for someone who cares about every aspect of the craft, not just as a director.”

So what’s next as Woodruff’s career in directing takes off like a rocket? He’s currently working on several projects, working on scripts, as well as offers sent to him. Ultimately though, he just wants to continue doing what he loves. “I want to be able continue to do films, no matter what the medium, no matter what the genre is, to be able to approach them all with the same level of commitment to getting a good story and great visuals on the screen.”

The visuals are stunning, as are the creatures created by Woodruff himself. They set the tone for this journey into the world of demons, humans and ultimately a hero’s emergence from darkness. If you’re a fan of the supernatural, paranormal, horror genre, be sure to check out Fire City: End of Days, which will be available on DVD and Digital HD October 6, 2015.