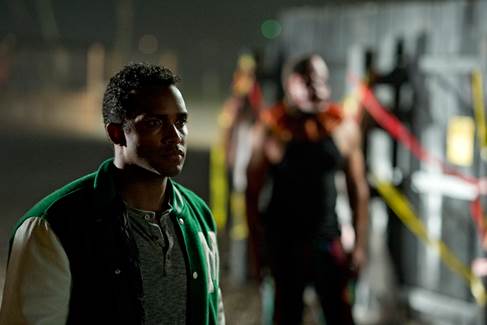 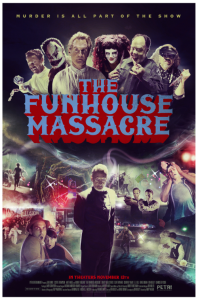 The Funhouse Massacre, from director Andy Palmer and writer Ben Begley (based on a story by Begley and his wife, Renee Dorian), is an homage to the slashers of the ’80s and ‘90s, writ larger and gorier for the current horror audience. When it works, it’s ridiculously funny, but when it doesn’t, it’s just ridiculous.

The set-up is simple: On Halloween, a haunted house becomes filled with terror as five escaped serial killers and the killer who set them free turn the fake horror scenes into a real bloodbath.

The film begins at Statesville Mental Hospital, where a reporter who turns out to be the “Stitch Bitch,” a killer called Dollface (Candice De Visser), is getting a tour of the wing where five notorious murderers are kept in solitary: Mental Manny (Jere Burns), a false prophet who convinced his congregation to commit suicide; Animal the Cannibal (E.E. Bell), whose crime is in his name; Dr, Suave (Sebastian Siegel), a diabolical dentist; The Taxidermist (Clint Howard), who stuffs people instead of animals; and Rocco (Mars Crain), a behemoth of a man who puts on a clown face and kills with his bare hands.

Dollface makes short work of the warden (Robert Englund, suitably oily) and frees her buddies, who rampage through the hospital before heading to the Land of Illusion Haunted Scream Park, which not-so-coincidentally contains rooms highlighting each of their crimes (one of the funnier threads in the film is the killers complaining that their rooms aren’t quite right or don’t contain the correct tools they used to slash up folks).

Elsewhere, Sheriff Kate (Scottie Thompson) and Deputy Doyle (Ben Begley, doing his best Scream-era David Arquette) are investigating the death of the real journalist, while a group of friends at a local diner are heading to the haunted house. By the time the group gets there, mayhem is in full swing, but they don’t realize it until one of their own is brutally murdered. It then becomes the typical “who will survive the night” but with a twist: the ostensible Final Girl, Laurie (Dorian), kicks a lot of ass. Sheriff Kate is also hyper-competent and has a tie to one of the killers, making her vengeance personal.

All the murders are outrageous and gross; we even get a point-of-view shot through a hole in someone’s head. The over-the-top killing is played for laughs and is rarely morbid, but still grotesque. The fake deaths of the haunted house are so well-done with animatronics and blood that it does make it harder for the participants to distinguish what is real and what isn’t, and when the massacre is in full swing, the lack of reaction from the potential victims causes Mental Manny to remark, “I’m amazed at how desensitized you all are.” The desensitization is typified by one unnamed character who goes throughout the maze texting.

If the film is commenting on the current horror audience’s presumed desensitization to violence, it’s lost in the sheer amount of ridiculousness occurring onscreen. The lack of characterization for both the protagonists and antagonists also leaves one without any rooting interest; I didn’t know the names of half the protagonists until most of them were dead, and only knew the killers’ names because they all got formal introductions. The film does seem to be a little more interested in the killers than the victims. The actors all do seem to be having fun, too, but I wouldn’t say I was sad when many of the characters met their disgusting demise.

Still, the film has its good points; the homages, while occasionally slight, are done with love and not disdain, and once the massacre is in full swing, the comedy hits just right. I admit I laughed watching Rocco pull some hapless kid’s head clean off because it was so silly, as well as at some bloody slapstick from Begley’s even-more-hapless Doyle.