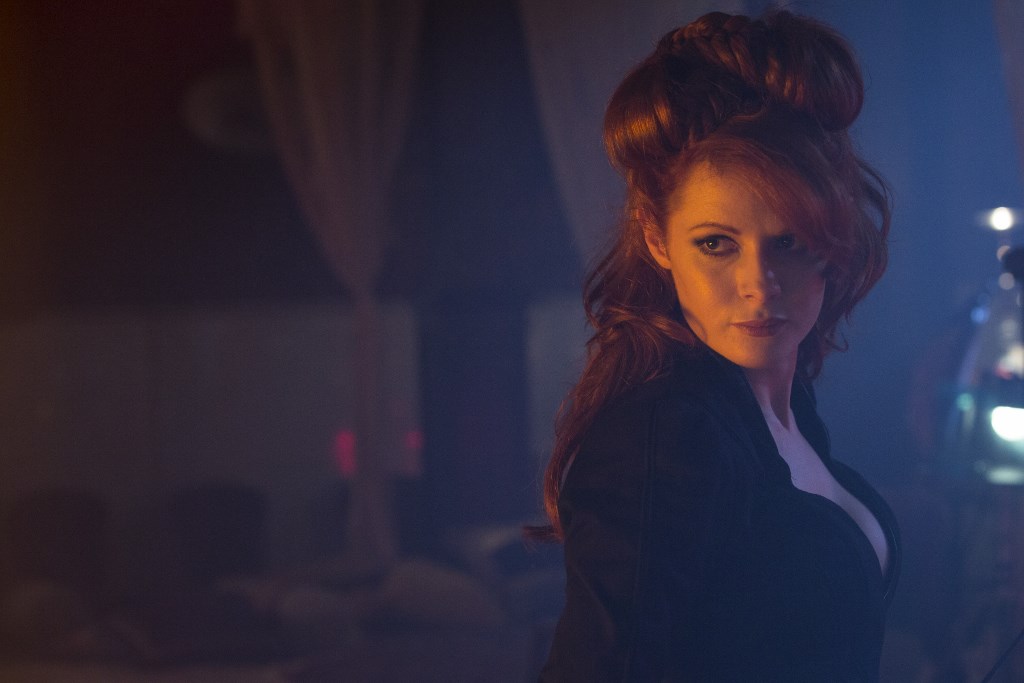 We see the Widow find a former regent of hers named Teague in a dive. She tells Teague of her ambitions to go after Quinn so the other barons acknowledge and follow her lead. Ryder sends assassins after her. *Sighs* Poor naive man! Minvera shows us why she goes by the Widow now. Something tells me we are going to see an awesome fight sequence within the first five minutes of each episode. I counted roughly 7 nomads that the Widow took down with her knives slicing and dicing. Being a hired nomad is not the best job right now! The last one tells her before getting a heel puncture in the neck that Ryder hired them. 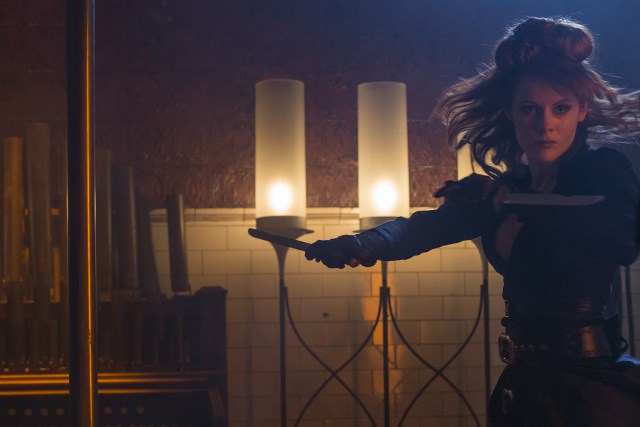 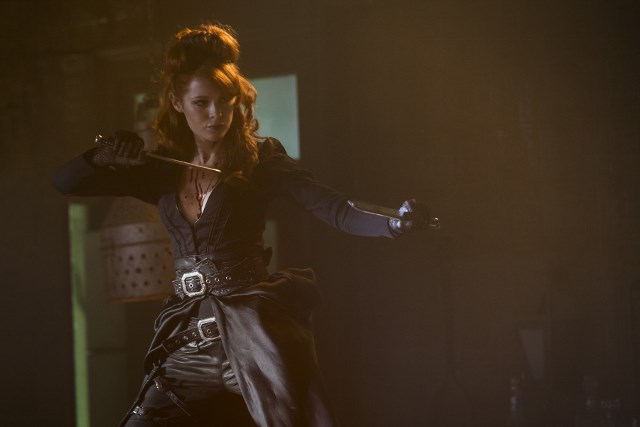 M.K. finds himself on Widow lands and runs into Tilda (Ally Ioannides), one of her daughters. Impulsively she takes him to the house and introduces him to her mother. On a side note, I want ninja stars shaped like butterflies! Meanwhile Ryder and Sunny manage track him into the Widow’s territory. Ryder wants to continue on to find and question M.K. but Sunny doesn’t want to because taking the Clipper force into Widow lands will be considered an act of war, even if the reason is for finding a runaway.

At breakfast Sunny and Ryder report where M.K has gone. Ryder shows Quinn the necklace M.K. was trying to take back and learns that it belonged to M.K’s mother. Sunny again denies seeing anything like it when the Baron asks. Quinn is already suspicious there is a traitor in their midst. Also Quinn knows someone hired nomads to try to kill the Widow. Ryder denies it was him when asked.

Can’t take a Bath in Peace

Awkwardness is afoot when M.K. has to undress in front of Tilda after she draws his bath. She claims momma told her he “couldn’t stay out of [her] sight.” Of course Tilda takes a peak. The Widow creeps out M.K. when she suddenly appears and starts washing his back.  She wonders if he’s the boy she has been looking for with powers. M.K. claims there’s nothing special about him as his family were tobacco farmers.

Quinn and Sunny go outside the fort without an escort. We get a little more background on Quinn. When he was a kid Quinn approached his Baron about becoming a Clipper after seeing his father, a cog, get punched to death after being accused of stealing extra food. Quinn killed the biggest colt boy in the pit. Quinn felt very alive when he made that kill. Seriously that should’ve been a clue that things were about to get crazy.

The Widow said a very interesting quote while meeting with nomad leader Hud (Owen Harn):  “The appearance of weakness is the greatest advantage.” She offers territory if the leader helps her with overthrowing the Baron Quinn. Hud scoffs at the idea that her and her “girls” would help provide the advantage. The Widow has Tilda fight with one of the leader’s fighters. Tilda wins of course. It wasn’t even a contest.

Sunny and Quinn stop by Doc Vernon’s (Tony Bentley) house.  We learn that Vernon and his wife Hannah (Jennifer Griffin) adopted Veil when she was an infant. Hannah knows about Veil’s pregnancy. As Quinn is getting examined, Sunny tries to talk Hannah into convincing Veil it’s dangerous to be pregnant to no avail. Quinn finds out he has a tumor that’s incurable. Sunny shows some defiance when Quinn asks him to clip the doc and Hannah. So Quinn does it himself using Sunny’s sword.  He then demands that Sunny burn the place down. The look on Sunny’s face as Quinn walked away seemed resolved. His Baron is losing it, it’s time to go!

After that I don’t blame Sunny for going to have a drink with Waldo (Stephen Lang) before going to see Veil. Sunny probes Waldo about potentially escaping the Badlands. Waldo, who appears to be a retired Clipper, gives Sunny a reality check about trying to leave.

The Widow asks her daughter to fight M.K. and draw blood to see if he is the boy she’s looking for. She at least warns her daughter that M.K. could become dangerous once his powers are provoked. When M.K. is brought before the Widow, he declines her order that Tilda train him. M.K. pleads with Tilda as she’s trying to fight him that he was telling the truth about why he was in the woods. Instinctively Tilda cuts herself and puts her blood on his face so the Widow is fooled when M.K. doesn’t react to the blood.

Sunny admits to Veil that Quinn killed her parents. He guessed that the reason was because he was dying and paranoid of enemies finding out. Quinn was really naive if he thought word spreading about killing the doc would not make people think something was up with him. Because of this recent event, Sunny tells Veil he now wants to get out of the Badlands. Ryder, whose right foot looks jacked up with missing toes, finds out from the prostitute he visits that the nomads have a supply of his father’s opium stashed in a turbine station. Yeah that doesn’t smell like a set up at all, especially when the woman seemed to signal another by hanging a red piece of clothing.

M.K enlists Tilda’s help in trying to leave the Widow’s fort. She tries to help him and just tells her mom’s business about why she’s looking for a boy with powers when he asks why she was trying to cut him. She kisses him as a way of distraction when the Widow walks in with her allied nomad leader. The Widow asks M.K. to leave after seeing that kiss. Hud offers to take M.K. with him knowing there’s a bounty on him. Remember the woman that was watching for a signal? Well she is one of the Widow’s daughters informing her “mother” that Ryder took the bait. Sucker!

Ryder and Sunny go on a scouting mission and get ambushed at the station after conferring with Quinn. Sunny has to rescue Ryder after he is hanged by chains and surrounded by the Baron’s men. The kill count this time is like 20-30 men. I was getting serious Kill Bill vibes during that fight scene, which was still just gorgeous to watch. I was disappointed though that I didn’t get to see Ryder fight at all! That was the worst tease ever. Hud conveniently stored M.K. at the station. Fortunately M.K. had one of Tilda’s butterfly ninjas and he was able to escape. He even managed to help Sunny save Ryder by killing Hud. As Ryder is still knocked out Sunny and M.K form a partnership. Sunny will train the boy as his Colt, and when he has enough control of his powers, he will make an escape out of the Badlands, with pregnant Veil in tow. Sunny reports to Quinn what happened at the station, the Widow’s plans, and how M.K. helped.  He almost kills M.K. but Sunny informs Quinn about wanting Sunny as his Colt.  Quinn will be watching M.K. especially since this would be the first time Sunny has decided to train a Colt. Whew! 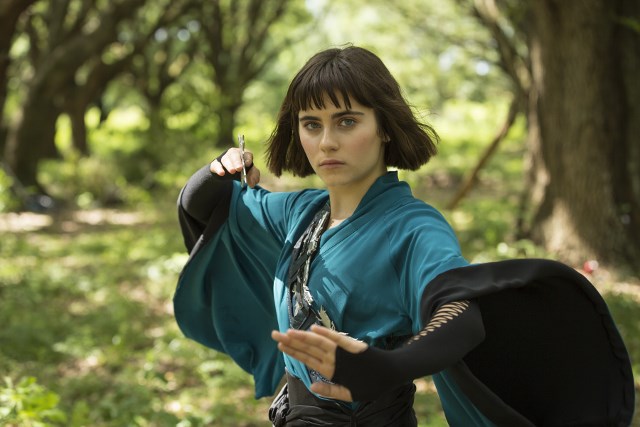 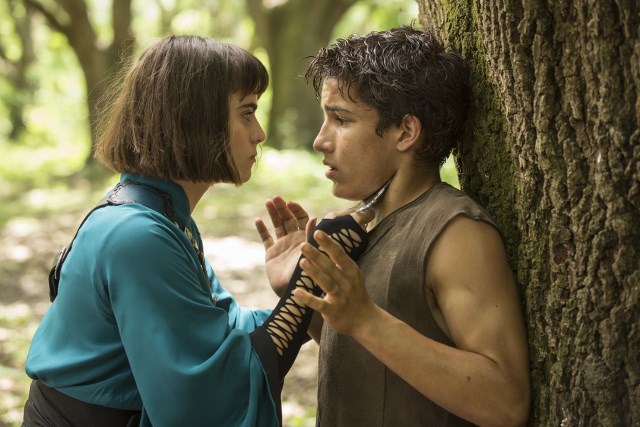 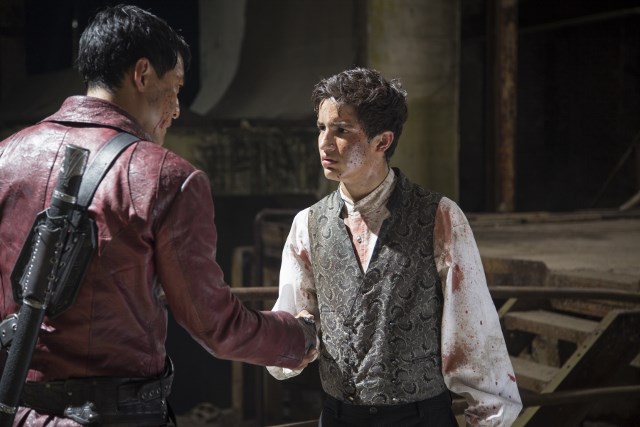 And that’s just episode two guys! I’m loving this show! I’m glad we really got to know a little bit more about the Widow. While her plan didn’t quite pan out, I had to admire her tenacity. The opening fight sequence was a great way to show that she’s got some moves. I thought her wardrobe was perfect. I have to give props to Beecham because she can fight and walk in spiky heels! You can tell that with the introduction of Tilda, there will be a young star-crossed love between her and M.K., and Tilda seems like a quiet, understated character that can surprise you. I’m looking forward to learning more about her. Ryder, even though he got injured for his efforts, did get what he wanted in that his father will be making a move against the Widow. He proved his own point, even though he helped provoke it. While I was hoping that we would see Jade, Quinn’s bride to be in this episode, it does look like she will be in this coming Sunday’s episode. Also I’m looking forward to Ellen Hollman, who played Saxa from the Spartacus series, appear in episode 3 as one of the Widow’s minions Zypher.