The 100 is back and bigger than ever. Certainly the scope of the landscape has been deeply expanded. Consider if you will how season 1 was limited primarily to the station and the drop ship and season 2 grew to include Mount Weather, TonDC and of course Camp Jaha.

We’ve grown into traversing whole sectors of land with the first episode alone.

We pick up with John Murphy who after having watched some guy in a video kill himself, finds himself trapped in his little taste of heaven. With no other form of entertainment, Murphy listens to more of the footage (which gives us and a captive John some insights into A.L.I.E.’s origins), bounces a ball off the walls, then bounces off the walls himself. 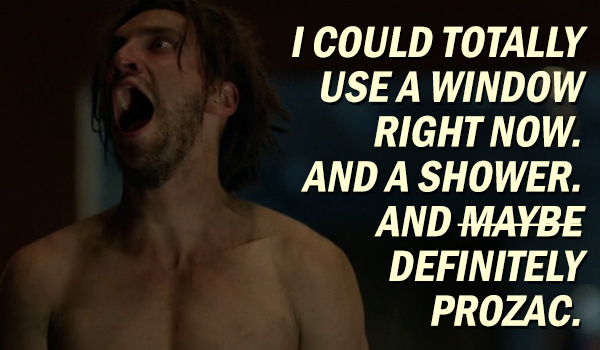 When the door opens automatically (a mere 86 days later) John escapes to find Jaha who has embraced his inner crazy. Yes, Jaha has found the City of Light! I’m sure everything will be fine now.

Meanwhile back at Arkadia, Bell apparently thinks Lincoln should beat the crap out of him. Back in Season 1, I would have agreed but Bellamy has grown on me. So be nice to him, Lincoln! No wait, it’s just a training session. And now, with his new jacket, Trikru Lincoln becomes one with the Skaikru. Congratulations, Lincoln! I’m sure Octavia will love this new development. 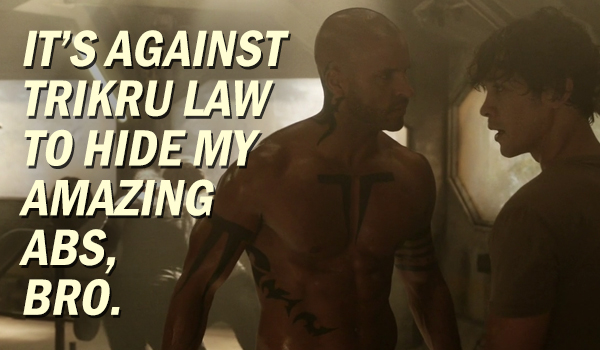 Bellamy has to leave for Sector 7, which Lincoln warns is near Azgeda lands. Too bad he can’t go with them but Heda Lexa holds a mean grudge and the Kill Order against Mr. Hottie Abs is still on. Before taking off, he checks in with Kane who tells him not to screw anything up, which is totally unfair because it’s been several months since Bell’s done anything stupid like send Murphy and Finn off on their own to find Clarke. I’m sure everything will be fine now.

We barely see Abby before she rushes off to be a doctor and Kane gets word someone wants to meet with him. But who? It’s such a mystery! I wonder if we’ll find out during this episode. (Spoiler alert: Yes we will).

Bellamy gathers the team, including Monty and Jasper. And by gather, I mean scrape Jasper off the floor. Our (formerly) mop haired sweetheart is very focused on self destructing. So of course, Bellamy and Monty think it’s a great idea to bring him along on a dangerous mission. Great thinking, guys! 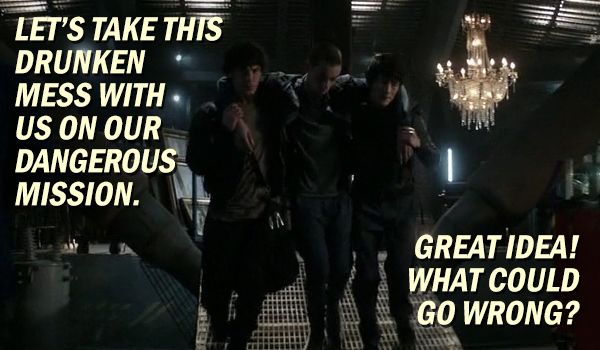 Meanwhile, Bellamy’s got a girlfriend. Oh look, it’s Clarke! Just kidding Bellarke fans. She seems sweet, I like her. (She’s going to die, isn’t she?)

Our team takes off with a still injured Raven driving(!) and Octavia riding alongside via horseback. Oh yes, it’s a new day, 100 fans! No more long trudges through the trees. All seems great until Raven’s tracker signals a tracking beacon is nearby and it’s from Farm Station. That means Monty’s parents and Miller’s boyfriend so Bellamy and team make a command decision to ignore protocol and check it out even though it’s in Sector 8 (Ice Nation territory).

Over in Jaha land, Murphy wakes up, no longer grungy and with food and water…and Jaha meditating in the next room/in the City of Light, or something. When Jaha comes to, John tries to get him to see that A.L.I.E. is the one who, you know, destroyed civilization as we know it. If you thought Jaha came to his senses, you’re probably disappointed, and probably one of a few who don’t think Jaha’s totally cray. 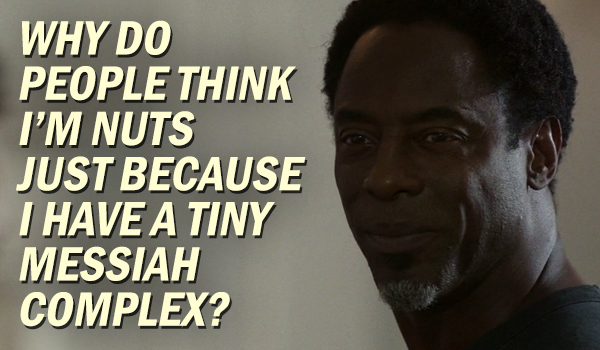 We rejoin our scouting team as they trace the tracking beacon, hoping to find their friends. Long story short, they don’t, unless their friends are now Azgeda warriors. Octavia takes point since she’s the only one there who knows Trigedasleng and the men in white war paint think our team is looking for Wanheda, but Octavia has no idea what that means. Monty notices the lead warrior is wearing the tracking beacon like a trophy and Jasper decides this is the time for him to exercise some diplomacy by ripping the beacon off of him. Needless to say, the Azgeda warrior was not impressed. 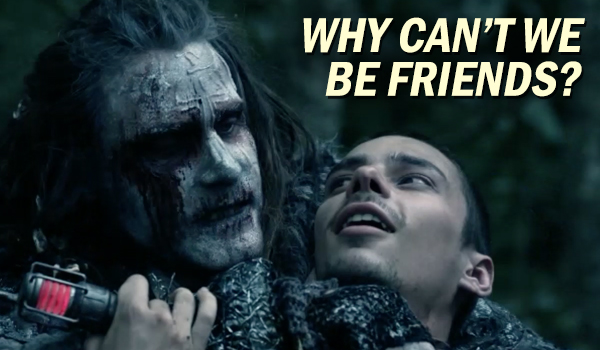 In order to save Jasper, the team has to kill everyone. Thanks Jasper! I will l say there was an impressive sword fling by Octavia in this sequence. Girl’s got some mad warrior skills goin’ on there. While they bemoan the, what some might call a serious breach of the peace treaty, they get an incoming message to meet Kane in Sector 4 pronto. So Bell sends Jasper back to Arkadia with Octavia and Raven and the rest rush to meet with the Chancellor. Or co-Chancellor. (I haven’t really figured that out yet). When they catch up with him they find him with Indra who gives them some pretty scary news: Clarke is being hunted. By everyone.

Including wild animals, as it turns out. Or at least she is when we catch up with her. But in the end, the panther(?) tracking her was no match for our dear, slightly off kilter leader with a bad dye job.

Back in Arkadia, Octavia and Raven arrive with Jasper who was injured by the Azgeda warrior with the knife to his throat. Abby notices Raven struggling. She can’t get down from the horse. Our favorite mechanic has no choice but accept Abby’s help but is in no mood to talk about it.

Meanwhile, Indra experiences her first ride in a car ever as she fills in the others with the A story: Everyone wants Clarke and she has a bounty on her head. Why? Because she’s now a symbol: Wanheda, the commander of death. According to Grounder tradition, when you kill someone, you get their power. Considering what happened at Mount Weather…yeah. Everyone wants her super bad. “Kill Wanheda, and you command death.”

By Clarke taking down Mount Weather, she weakened Lexa and now the Ice Nation wants Clarke’s power, presumably to make a move on the Heda, i.e. breaking the coalition and starting a war. 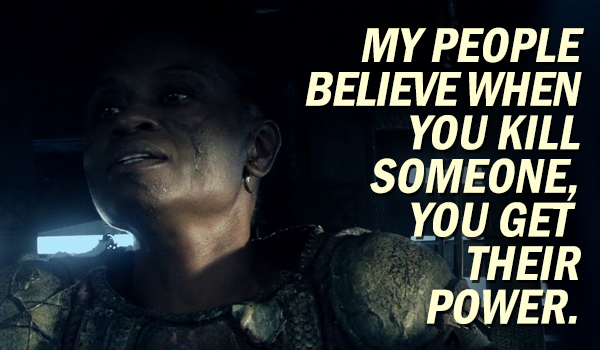 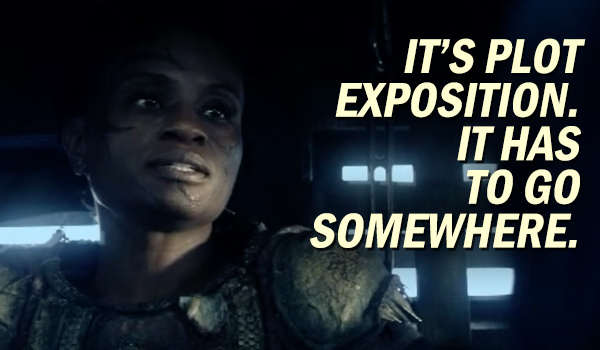 Clarke took her kill to a local trader to trade for supplies and is stunned to see one of the bracelets the original 100 wore when then were sent to earth. She asks about it but the answer is interrupted (of course!) by the arrival of Vane, I mean Roan, a bounty hunter who’s on the look out for a certain young woman. Gosh I wonder who that could be?

The trader, Niylah, does her best to throw Roan off the scent by telling him his quarry was there 2 days prior and that he needs go up north if he wants to catch her. 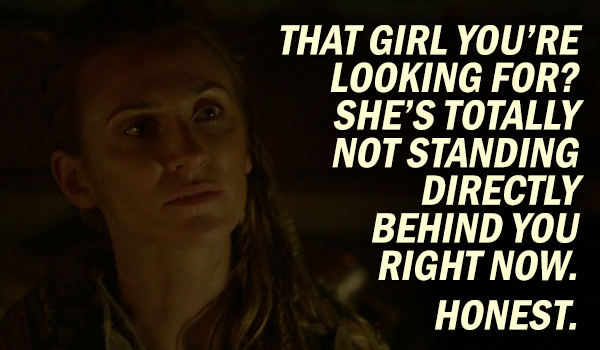 After bounty hunter Roan leaves, Clarke realizes she’s known all along who Clarke really was. Niylah tells Clarke why she’s helping her: Gratitude. Her mother had been taken by the mountain and Clarke ended the reaping.

In Arkadia, Abby wants supplies from Mount Weather and Lincoln tells her that’s not a good idea; which, inn tv talk, means we’re going to be revisiting Mount Weather some time in the near future. Meanwhile, Jasper wants to leave medical like now, Abby has several patients waiting and oh look, she’s tricked Raven into showing up there too to ask about her hip. Raven, who’s not really known for being receptive about discussing her problems at the best of times, lobs a verbal grenade at Abby and hints in a very non subtle matter that Abby’s life is a disaster and perhaps she should deal with her own issues first. 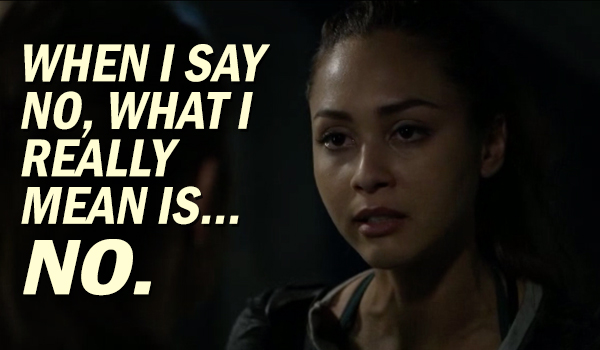 Speaking of Abby’s issues, Clarke is being tended to by Niylah, and by “being tended to” I mean, Niylah is cleaning the wounds she sustained from fighting that panther earlier in the episode. Niylah’s feeling chatty and wants Clarke to talk about the Mountain. Clarke in turn decides she’s not interested in talking and would rather be tended to by Niylah. And by “be tended to” I mean do the horizontal mambo. 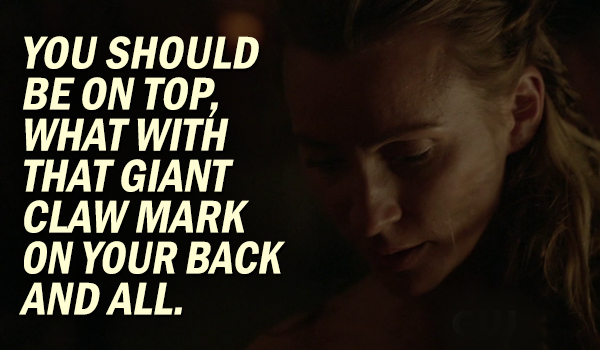 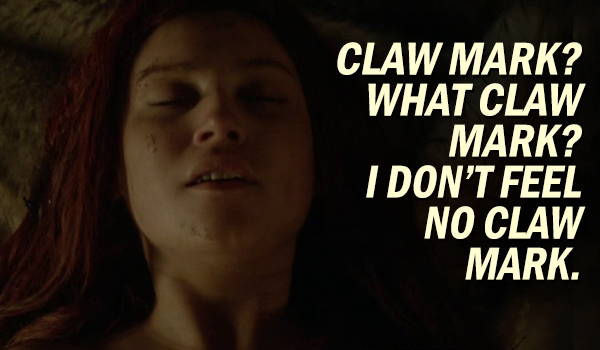 In Arkadia, Octavia and Lincoln are clearly having some issues adjusting to the new reality. Lincoln is trying really hard to fit in and Octavia resents it all. They can’t stray far because of the kill order floating over Lincoln’s head and she hates that he’s wearing the uniform like he’s Skaikru security now. She’s Trikru in her heart through and through and just wants them both to be free of it all.

Back in Jaha land, Jaha tries again to sway John to his cause, explaining that A.L.I.E. is amazing! She converted a nuke warhead into an energy source! Murphy’s decided he’s had enough of Jaha’s brand of cray and is ready to split (who could blame him at this point) when Jaha tucks a disk that’s supposed to take him to the City of Light in his vest pocket.

Just then Emori showed up (you know, the girl who had a knife to his throat, knocked him out, stole his stuff and left him in the desert? Yeah her) so John changes his mind and goes with them. 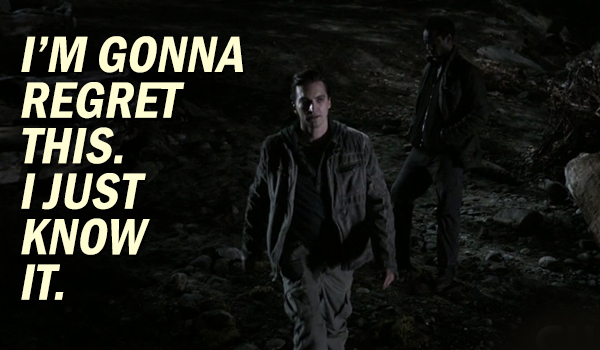 And now, a special song for all you kids out there. Yes, the moment finally came when Shawn Mendes got to do a number on The 100. Generally I don’t care for these sort of drop ins, but the song was good and it was a nice backdrop an important Abby/Raven conversation where Abby admits she’s spread too thin and Raven insists she’s not having “that operation”. Well that’s not ominous at all.

Meanwhile, we’re treated to a nice montage showing the state of where things stand. Lincoln arrives back at his and Octavia’s room but she’s not there so he goes outside the walls and joins her as she sleeps on the ground. Clarke wakes from a nightmare and starts to pack her stuff. John, Emori, Jaha (with A.L.I.E. in tow) and crew are on the way. And Bellamy and gang are driving in the dark.

The focus returns to Arkadia and the dulcet tones of our in house songster and we’re treated to more of Jasper’s ongoing meltdown when he attacks anyone who has anything from Mount Weather. Including our songbird! 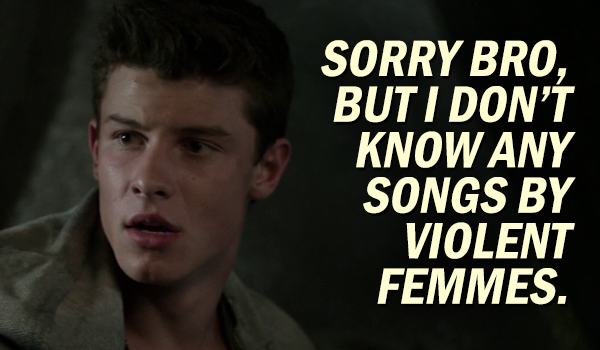 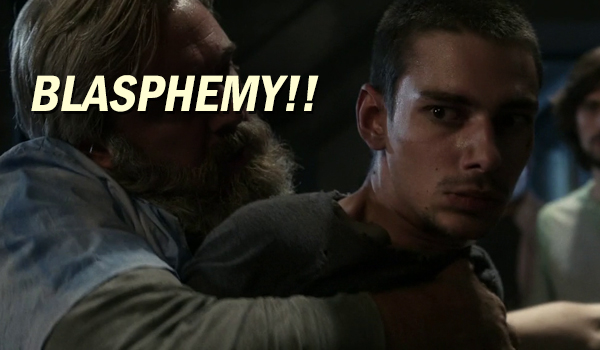 Back to Bellamy’s team, Monty’s forced to lurch the rover to a stop when he notices a fallen tree is blocking their path. Indra warns that the tree’s been cut down. But do they listen to her? Nooooo. 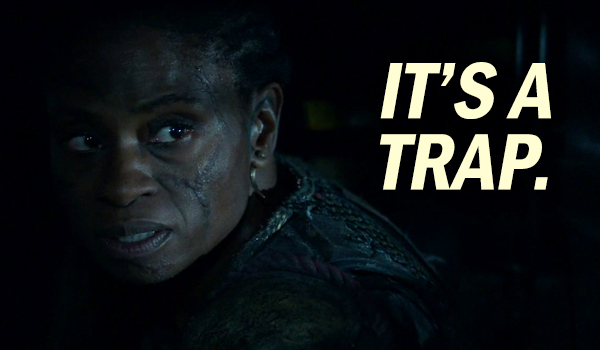 Another tree falls and it’s like…look Bellamy. I totally respect you but Indra knows her stuff, dude. Perhaps you should listened to the warrior providing you with insight into how things work on the ground, hmmm?

Back at Niylah’s, Clarke leaves walk of shame style (bad form, girl!) and is ambushed by Roan who puts a knife to her throat. “Hello, Wanheda.” 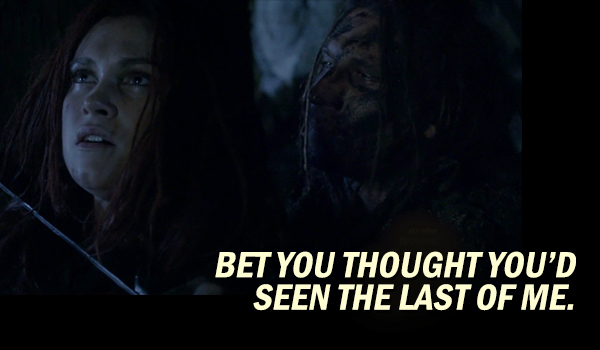 Take note, ladies. Bad things happen when you try to sneak out after the deed is done. I’m just saying’.

Wanheda Pt. 1 was a fantastic start to the season. There’s little if nothing I’d change to improve on it. What do you think? Let me know! Contact me on Twitter @theuberfan.

Until next time, Grounders!

And if you’ve already seen Part 2, here is my recap of it.