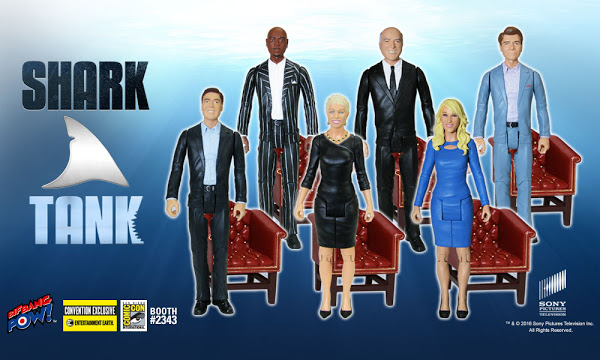 Today Bif Bang Pow! announced a line of consumer products celebrating the popular television series Shark Tank. The first products are a set of figures that will be San Diego Comic-Con exclusive and available at Entertainment Earth’s booth (#2343)his July. See press release and information below: 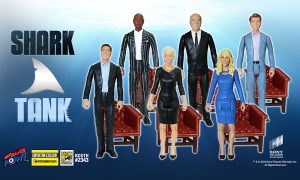 “As an entrepreneur myself celebrating a 20th anniversary in the consumer products business, I have great respect for the Sharks on the Shark Tank panel as well as anyone who stands before them to pitch their ideas,” commented Jason Labowitz, President and Co-Founder of Bif Bang Pow!. “While Bif Bang Pow! produces plenty of collectibles that celebrate fictional superheroes, these ‘Sharks’ are real life superheroes – saving the day by investing in businesses that create jobs, which ultimately improves lives for thousands of families.”

This new line-up of collectibles will offer exciting, never-before-made merchandise inspired by the show – providing something for the aspiring entrepreneur and fan alike. The first Shark Tank collectibles  exclusive 3 3/4-inch action figures of the Sharks – will be offered to fans attending San Diego Comic-Con this July. Available in two separate limited edition sets, each Shark action figure was digitally sculpted and has 7 points of articulation. Mark Cuban, Daymond John, and Barbara Corcoran are in set one; Kevin OLeary, Lori Greiner, and Robert Herjavec are in set two. Additionally, each set comes with chair accessories and a foldout diorama of the actual Shark Tank television studio set. Each collectible is individually numbered with a holographic sticker, highlighting the limited production run of only 1800 units. 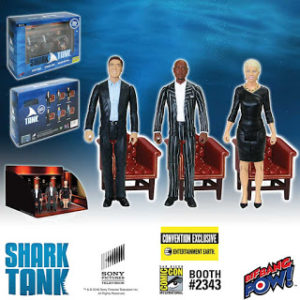 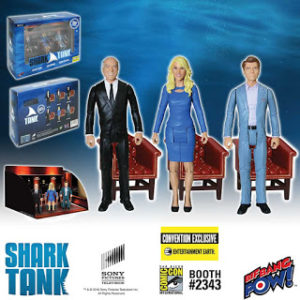 In development now, the diverse range of products will also include drinkware, stationary products, car accessories, and a question-and-answer ball that features well-known Shark catchphrases. Shark Tank merchandise from Bif Bang Pow! will be available via Entertainment Earth and other fine retailers. For updates on product releases and pre-orders, visit entertainmentearth.com.