Diamond Select Toys this week is releasing 2 different box sets of Marvel Minimates based on the first seasons of Jessica Jones and Daredevil. In addition they announced a set based on the Luke Cage TV series. More information and pictures courtesy of their press release below.

The Marvel Minimates line of mini-figures has tackled every corner of the Marvel Universe, from the comic books to movies to animation. But now they’re diving into the world of Marvel TV! Two box sets based on the first seasons of Daredevil and Jessica Jones hit stores this week, with a set based on Daredevil Season 2 on the way, and now DST is proud to announce a new set based on the Luke Cage TV series!

Featuring Luke Cage, Misty Knight, Cornell “Cottonmouth” Stokes and Mariah Dillard, this box set will include both raised and lowered hood pieces for Luke Cage, as well as interchangeable arms, legs and head to recreate his post-experiment appearance.  Read on for more information about all four sets, and reserve or pre-order yours today, through your local comic shop or favorite online retailer. 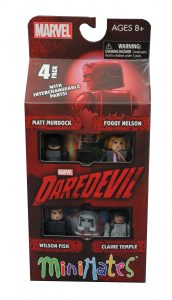 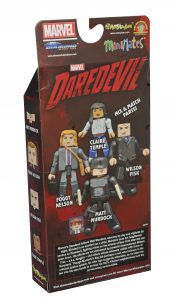 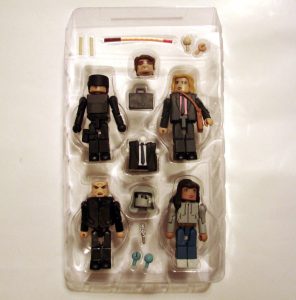 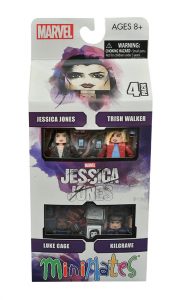 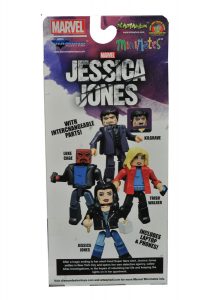 A Diamond Select Toys release! Return to the world of private investigator Jessica Jones in this Minimates mini-figure box set based on the hit Netflix TV series! Jessica Jones, Luke Cage, Trish Walker and Kilgrave each stand 2 inches tall and feature 14 points of articulation. Plus, each character comes with removable jackets and alternate parts, including arms and a screaming Kilgrave head, as well as accessories like smartphones, a laptop and Chinese takeout! Includes four display stands. Packaged in a full-color window box. (Item #JUN162392, SRP: $24.99)

A Diamond Select Toys release! The Devil of Hell’s Kitchen is back, with a new friend and two new frenemies! Based on Season 2 of the Daredevil TV series on Netflix, this box set of four Minimates mini-figures features Daredevil as he appeared in the infamous stairwell fight, plus Elektra, Stick and Karen Page! Each 2-inch Minimates mini-figure features 14 points of articulation, fully interchangeable parts, and a display stand. The set also includes a duct-taped gun hand and chain for Daredevil, a removable hat and alternate head for Stick, a laptop and Frank Castle’s X-Ray for Karen, and sais and an alternate head for Elektra. Packaged in a full-color window box. (Item #OCT162588, SRP: $24.99) 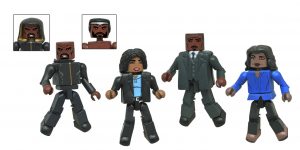 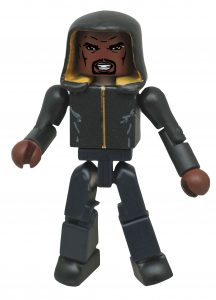 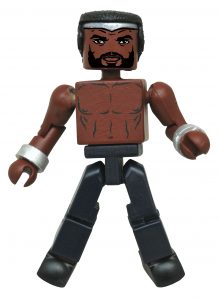 A Diamond Select Toys Release! Say his name! The newest Marvel TV star is Luke Cage, a.k.a. Power Man, and the Marvel Minimates line is celebrating the release of his first season with a box set of Minimates based on the Netflix series! Luke Cage, Misty Knight, Cottonmouth and Mariah Dillard each measure approximately 2 inches tall and feature up to 14 points of articulation. Each figure features interchangeable parts and accessories, and Luke Cage can transform from his hooded streetwear to his post-experiment Power Man look! Figures come packaged in a full-color window box. (Item # to come, SRP: $24.99)

Find a comic shop at comicshoplocator.com!