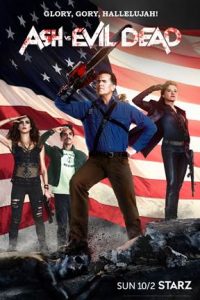 Note: Starz requested that reviews not contain spoilers, and we’re abiding by that; everything mentioned below has either already been seen on TV or in the teaser trailer for the new season, or was released as casting information between seasons.

When we last saw Ashley J. Williams (Bruce Campbell), he was merrily (and perhaps insanely) driving his compatriots, Pablo (Ray Santiago) and Kelly (Dana DeLorenzo), to Jacksonville, Florida for a life free from Deadites and especially the author of the Necronomicon Ex Mortis, Ruby (Lucy Lawless). Ash gave Ruby the Necronomicon in exchange for sparing the lives of Kelly and Pablo, piled them all in the Delta, and headed to his dream town and his dream life.

One small problem, though: the massive sinkholes and general mayhem that was occurring behind them.

Season 2 (of which Starz made available the first two episodes) continues the story in Jacksonville, where Ash, Pablo, and Kelly are working at a bar and having a hell of a good time—well, mostly Ash is having the good time, as Kelly seems pre-occupied waiting for the Deadites to return and Pablo appears to be hiding something. But from everything shown, Ash has made a good life for himself in his version of heaven, complete with kegs he can open with his chainsaw and nubile women happily throwing themselves at him. What could possibly go wrong with this scenario?

Look at the title of the show. It ain’t Ash Vs. Kegs of Beer, after all. Ruby and her creepy eyeless children are still out there and sinkholes from hell are still opening; it’s only a matter of time before all of that madness reaches Jacksonville.

Yes, before long, Ash has to confront Ruby; worse than that, he has to confront his past in the form of his home town and more importantly, his father, Brock (Lee Majors). The dynamic between father and son set up in the first two episodes is going to make a lot of fans very, very happy.

Season 1 of Ash Vs. Evil Dead was a ton of fun, a blood-spattered (and more often blood-soaked) trip of a show, picking up the story of everyone’s favorite chainsaw-handed boomstick-wielder thirty years after the events of the original Evil Dead trilogy, and giving him new friends and a new mission. Each 30-minute—give or take—episode managed to pack in maximum quips, fun, occasional pathos, and blood, and the season was a big hit for Starz.

Season 2 continues the quips, the fun, and even the pathos, giving us more insight into what drives Ash and why. It also pours on the blood—my God, does it ever pour on the blood. If anything, the gore levels are ratcheted up to 11 from the previous 10.

Ash, Pablo and Kelly’s relationship remains delightful, and long-time fans of Campbell are going to love the more overt touches of “Three Stooges” japery that have been added to the repertoire of Ways to Torment Ash. There’s also possibly the most disgusting, over-the-top stunt in ED history to look forward to for those who revel in Ash’s misery.

Santiago and DeLorenzo remain perfect partners for Campbell, and Lawless gets more chances to flex her comedy muscles as Ruby matches Ash’s sarcasm taunt for taunt. Majors, the newcomer, fits right in as Ash’s libidinous father; his repartee with Campbell is charming, and the two act well off each other. Other newcomers Michelle Hurd (playing yet another woman named Linda that Ash is fond of) and Stephen Lovatt as Linda’s husband, Sheriff Emery, round out the cast of the first two episodes and also fit right in with the frankly messed-up proceedings.

If the new season of Ash Vs. Evil Dead keeps up the pace of the first two episodes, we’re in for another wonderfully weird, gross, and funny ride.

Bluefin announces their exclusives for NYCC 2016.