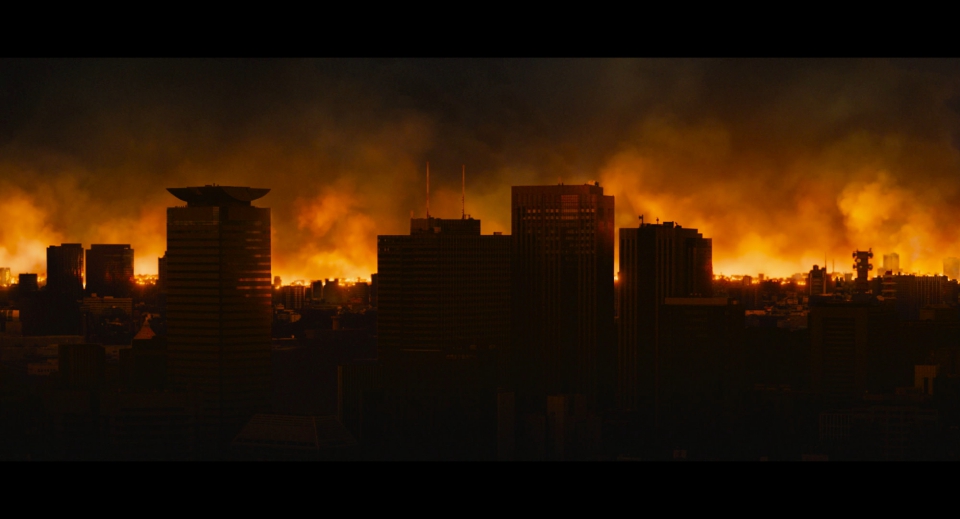 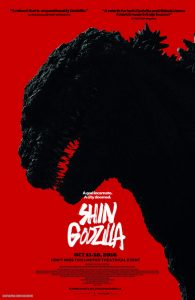 Having already conquered Japan, the latest Toho-produced Godzilla film, Shin Godzilla (a.k.a. Godzilla Resurgence, although the Japanese “shin” means “new” in English), has come ashore for a special week of screenings in major theaters across the country.

A rebooting of the entire Godzilla mythos, Shin Godzilla imagines the King of the Monsters as a series of nightmare-inducing mutations, resulting in a creature with a needle-filled mouth, exceptionally thick skin, an extra-long tail, super-large spines, and teeny tiny eyes. The red glow of his hide cements an image that is absolutely terrifying—and that’s even before he opens his hideous mouth to let out his famous roar (a combination of the original 1954 sound and various roars from the other Godzilla incarnations can be heard throughout the film’s 120 minute run-time).

He’s also the tallest Godzilla to date, measuring 118.5 meters upright; the creature at the center of Legendary’s 2014 version was a mere 108 meters. By contrast, the 1954 Godzilla was only 50 meters tall. I admit to not being fond of the design when images were first leaked on the internet, but in the context of the film, the way Godzilla looks makes perfect sense.

The film, co-directed by Hideaki Anno (the Evangelion series) and Shinji Higuchi (Attack on Titan), with a script by Anno, moves very quickly for about the first two-thirds. The discovery of an abandoned boat in the bay is rapidly followed by boiling water and a damaged underground tunnel. High-level politicians convene to discuss the causes of the problems, with most settling on volcanic activity as the source. One younger politician, Rando Yaguchi (Hiroki Hasagawa), gives credence to reports of a strange, unknown creature that has been spotted in the bay, but his concerns are roundly dismissed.

Before long, however, a strange, unknown creature makes landfall and throws everything into chaos. The creature soon mutates into the monster known as Godzilla (in a naming sequence that is hilarious and will delight long-time G-fans). The politicians must figure out how to deal with the radioactive menace, resulting in a long series of meetings that are both amusing and exasperating. Having determined that Godzilla was born of sea life and carelessly dumped radioactive waste that has contaminated the sea floor, the politicians and a group of scientists and outsiders work feverishly to determine how to deal with the unprecedented problem.

Unfortunately, the military solution, with Japan aided by the U.S.—which seems to have been harboring lot more knowledge about the genesis of Godzilla before he made his existence known to the country he attacks—enrages the King, causing him to unleash a spectacular assault on Tokyo in Shin Godzilla’s most exciting sequence. The devastating attack is the best and most vicious Godzilla raid ever filmed, showing him to be the most powerful version committed to film and giving him new abilities to boot.

In the aftermath of Godzilla’s destructive rage, though, Shin Godzilla frankly spends an inordinate amount of time on the machinations of the Japanese government as it deals with a world—especially the U.S.—trying to dictate Japan’s response to the terror from the sea. While the depiction of the red tape causing a near-paralysis in the government’s ability to quickly respond to the disasters unfolding before them seems to have struck a popular chord with the film’s Japanese audience, if the film’s $73 million and counting box-office take is any indication, it bogs down the third act, making the film’s resolution seem rushed and a little corny by comparison. Still, as satire, it’s mostly effective, even when it plods along the way Godzilla does as he slowly lumbers towards Tokyo.

Anno’s apparent fondness for titling every meeting and every character who appears, along with the English subtitles in the U.S. version, means a lot of text flying by to keep up with the fast-paced dialogue and action. I admit it was giving me a bit of a headache by the end of the film, and I usually have zero problems watching films with subtitles. It seems a bit of overkill, too, as only the main characters—Yaguchi; his mentor Hideki Akasaka (Yukata Takenouchi); Prime Minister Seiji Okochi (Ren Ohsugi); the annoying U.S. liaison Kayoka Ann Patterson (Satomi Ishihara); and Ryuta Azuma (Akira Emoto), a scientist friend of Yaguchi’s with pertinent knowledge of Godzilla’s mutating nature—are easy to keep track of. A few other actors make an impression, but their character names flew by so fast that I couldn’t properly identify them (lack of pictures on imdb.com didn’t help, either).

The film is well-acted, has excellent cinematography, and as stated earlier, is fairly exciting in the first two-thirds despite the number of meetings and sub-meetings shown. Some of the CG is a bit dodgy, but it’s forgivable. Shin Godzilla also has haunting echoes of the March 11, 2011 earthquake and subsequent tsunami which led to the Fukushima nuclear disaster. That Godzilla retains his radioactive origins, albeit as a result of waste and not A-bombs, points to Japan’s continued unease with nuclear material. The human element isn’t lost here as well, even if Godzilla is now so big that we look like atomic atoms to his tiny, mean-looking eyes. The final horrific, if ambiguous, image should linger in the audience’s subconscious, too.

I’m recommending Shin Godzilla not just to Godzilla and kaiju fans, but to everyone who enjoys a good monster yarn layered with social commentary and criticisms of both local and global governmental policies and “cooperation.” Shin Godzilla is thrilling, satirical, frightening, and yes, a little dull and silly in parts, but overall, it’s an enjoyable and strangely enlightening ride.

TVTalk with The Nerd Element Ep 135: Catching Up