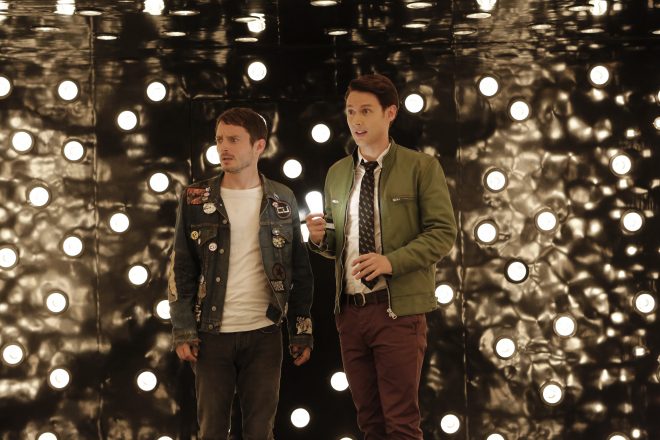 Surprisingly there was no Ken (Mpho Koaho) and Bart (Fional Dourif) in this week’s episode.  I guess they are still on the road.  Hopefully we will see their progress in next week’s episode. 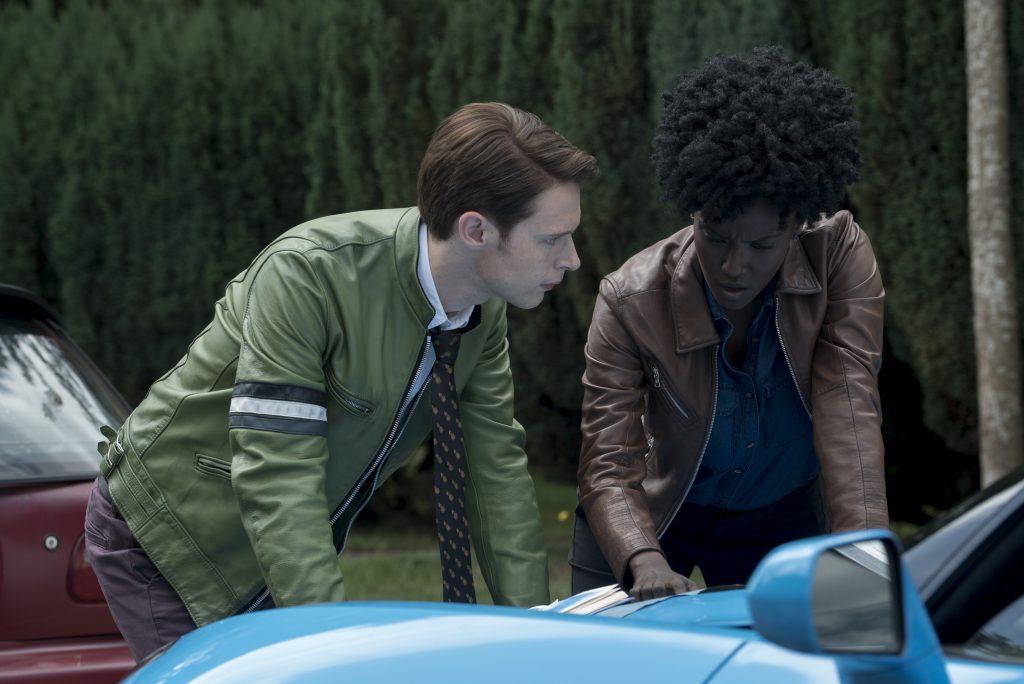 Alas, Agent Weedle (David Lews) soul departed from this earth thanks to getting switched into a mouse then eaten by Rapunzel/Lydia Spring (Alison Thornton).  Thanks to Rimmer (Aaron Douglas) and his goons “Fred’s” (Jeremy Jones) his essence takes over Agent Weedle’s body.

Amanda (Hannah Marks) mans the fort while Todd (Elijah) goes with Farah (Jade Eshete) and Dirk (Samuel Barnett) to find the entrance into the underground power grid developed by Edgar Spring back around 1978.  The area surrounding the grid, named Springsborough, included Todd’s apartment building, the Ridgely.  Farah goes onto explain that Edgar Spring disappeared not too long after buying Zachariah Webb’s mansion and shutting off the grid.  Patrick Spring didn’t want to have anything to do with the power grid after his wife Catherine died.  All three find the small entry point building leading to the underground grid.  Dirk, using the crank found in Webb’s lab last week falls into a trap door.  When Todd turns the crank he also falls into the hole. Both Dirk and Todd discover that they are in the underground tunnel. Farah tries to figure out how to get them out.

Fred/Agent Weedle visits detectives Zimmerfield (Richard Schiff) and Estevez (Neil Brown Jr) asking for information about Farah.  Despite Fred/Weedle’s weird questioning regarding the corgi, Todd, and Dirk, Weedle leaves with Farah’s folder and confirmation of where Todd lives. Both detectives’ flags are raised after that encounter!  Estevez, who has hidden the dog in an evidence box, and Zimmerfield theorize that Weedle is after the dog.

Weedle goes to Todd’s apartment.  He tries to intimidate Amanda after realizing the door is unlocked.  That should’ve been the first thing Todd got fixed. That’s dangerous to leave the door unlocked like that!  Anyway, Amanda does manage to reach Farah, who is trying to help Todd and Dirk get out of their predicament, before Weedle bust into the apartment.  Farah lets Amanda know that Todd fell into a secret passage which delights her.  Farah decides to help Amanda since what Weedle is doing is against protocol.  This of course leaves Todd hanging while Dirk wants to explore using the lightbulb he found at the lab.  Farah comes just when Amanda is starting to wonder if the agent is high.  Farah calls his bluff until Weedle turns the tables on her by revealing how she may have failed to get into the Army Rangers, FBI, and Naval Intelligence because of her paranoia. Farah is flustered but Weedle leaves giving her his card.  He stays outside until it gets dark but he updates Rimmer, who is at a bar talking up one of Lux’s old lovers.

Dirk and Todd discover various traps to get into a room in the Ridgely building full of TV screens.  First they go into a room full of lights and the walls start to fold in.  The lightbulb went into one of the screws without a bulb near the end of the room.  The bulb once screwed on is a knob to a door.  Todd and Dirk make it in just before the walls close in.  The next trap involved elements of Patrick’s pet Rhino Pepe.  The next door opened by conducting the electrical current from the door through Todd and Dirk onto the horn near the middle of the room.

With the rhino trap conquered, Dirk and Todd eventually makes it to the basement of the Ridgely building.  One side of the room is a wall full of TV screens with pictures of different animals and objects with a colorful background.  Dirk guesses correct in selecting the cat, shark, dog and the female symbol by pressing buttons right below the screens.  Then numbers show up in black and white.  Dirk correctly guesses 3 and 1 which refers to the 3 questions one answer that was on the envelope containing the map to the lab room at the mansion.  After guessing the numbers the TV screens show a map.  Yay! But the screens start sparking creating smoke, not good!

Farah and Amanda see Weedle FINALLY drive away.  Amanda initially thinks she’s having an attack when Farah confirms she’s also smelling smoke.  The ladies make it to the basement where Dirk and Todd are yelling for help through the wall.  Farah starts shooting to try to get through but then the Rowdy 3 (Michael Eklund, Osric Chau, Viv Leacock and Zak Santiago), who were parked outside of the building make it in and using a sledgehammer bust through the wall, freeing Todd and Dirk.  As payment, they feed off Dirk again by sucking blue energy from him, much to his chagrin.  Todd is wondering who are those guys!

Back at Todd’s apartment, Dirk figures that the maze was created by Edgar while the traps were created by Patrick.  Todd is under the impression that Farah was supposed to find the maze and not them.  When Dirk mentions the map Amanda flashes back to when the Rowdy 3 gave her visions of a map viewed on several TV screens.  They go back down there and Amanda uses the crank again which turns on the TV screens with the map.  One of the screens has a message for Dirk and Todd to save her. Farah reveals that the map points to Skagit Valley, four hours from their current location. Looks like a road trip is coming!

Rimmer lures Lux’s old love Sammy (Caroline Cave) from the bar to his lair.  He kills her with Lux’s old guitar after revealing that his group found the body-switching device in the 60s.  The group first experimented with animals, then old rich folk, then kidnapping famous people just because they could, including Lux.  Weedle and the other goons walk in to witness Rimmer cleanse himself of his old ambitions.  Instead he’s focused on the mission, especially since Weedle revealed that Dirk, Todd, Farah, and Amanda are all in the same place.  Rimmer believes those four will lead them to the machine.   He may be right. And that’s the end of the episode!

I loved the moments between Amanda and Farah this episode! Even though they just met, Farah already feels protective of Amanda, especially when she came to her rescue.  What I wasn’t expecting was for Fred/Agent Weedle to flip the script on her to the point where she got flustered. Up until this point Rimmer’s goons seem a little dense.  I’m hoping that their next run in Farah comes out on top! I was like Amanda when she shouted “Oh snap! You’re so cool!” during the first part of that confrontation.  Farah needs to not be in denial.  It’s okay to be “weird normal.” Is Farah going to get a clue that Todd is crushing on her hard? It should be interesting to see if a relationship develops between the two since right now Farah is not giving off those vibes.  I was glad that Amanda didn’t know what Todd has been up to because she had a genuine reaction when Weedle accused Todd of kidnapping the corgi.

It was confirmed that the morgue tech that tricked Zimmerfield and Estevez was part of their group when we saw him at the end of the episode.  That should have clued me in that they can think on their feet if necessary. Can Estevez and Zimmerfield please get up to speed?  They don’t even know that Farah was found.  When she said that her, Dirk, and Todd were the only ones looking for Lydia I was wondering why she didn’t even think of the detectives? It would be nice to see them all work together to solve the mystery.

I’m glad we got to see an actual body-switch take place.  Is finding the machine the only way to switch Lydia back? If so how were they getting by before switching bodies back and forth?  I felt bad for Agent Weedle. Turning into a mouse for like seconds and then get eaten by a girl is rough.  When Lydia is switched back, I hope she doesn’t realize she ate a mouse raw.  Ew! Also I have a feeling that Edgar Spring and Zachariah Webb is a part of Rimmer’s group, maybe even part of the leadership. I’m trying to figure how many people are in this “group?”  Side Note:  Sammy mentioned that she had an affair with Agent Nathan.  I had to chuckle too when Rimmer smirked because he knows that the FBI agent was dead. That was another nice way of connecting small dots with everything.

How in the world did Patrick have the foresight that Todd will be brought into the mix to leave that message?  Did he get some visions like how Amanda got visions? Conundrums.  The pictures of the animals were interesting too.  Again with the shark and the cat! If Patrick is in the cat, what new body will he have if they manage to switch him back?

Dirk and Todd managed to work together through the traps but just barely.  The first trap reminded me of the trash compactor scene on Star Wars.  The imagination of the traps I felt went well with electrical grid theme. I’ve always wondered how much money and time it would take to create traps like that?  Are workers hired? Do the workers realize what they are creating? I feel like Dirk would not have made it as far if it wasn’t for Todd.  Just another indication of how Todd is meant to help in this case.

I was pleasantly surprised that the Rowdy 3 came to the rescue again! At least they got something out of it this time other than wreaking havoc. I was also happy that they showed one of Amanda’s visions so soon. I recognized it immediately.  At least we know what the map means and that Amanda mentioned seeing it before.  Could Amanda become part of the Rowdy 3? If so would that mean that she would get the same abilities as them?

I’m looking forward to next week’s episode! What did you think? Sound off below in the comments!

Nominees for The Game Awards 2016 announced!