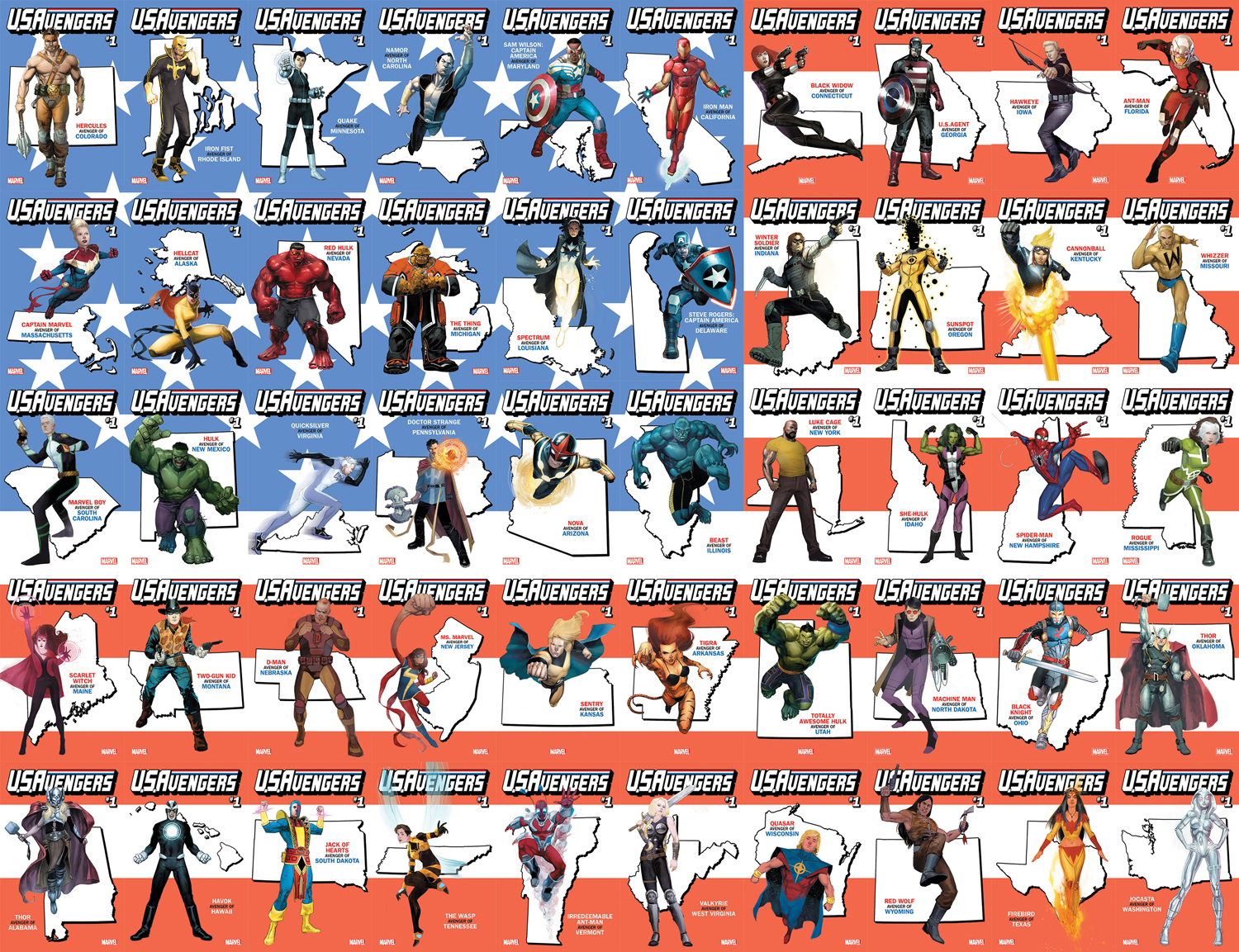 Marvel today released cover art for all the variants of U.S. Avengers #1. They are releasing 1 variant cover for every state (as well as one each for Washington, D.C., Puerto Rico, and Canada). More details including cover art is below courtesy of Marvel’s press release.

Action, Adventure and Intrigue Draped in the Red, White, and Blue

New York, NY—November 18, 2016 — From coast to coast – Alabama to Wyoming – the U.S.AVENGERSare here to unify our nation and proudly defend all its citizens. For the launch of this all-new series,U.S.AVENGERS, Marvel Comics will produce over 50 unique variants assigning one Avenger to each state which has garnered nationwide press attention from ABC News, Hollywood Reporter, Buzzfeed, and more, today, Marvel is excited to debut the entire lineup for these distinctive State Variant covers with exceptional artwork by Rod Reis.

“We did extensive research through Marvel’s history to be able to align a particular Avenger with each individual State,” says Tom Brevoort, SVP/Executive Editor. “Beginning with places of birth, and expanding outward to key stories featuring the character in that particular location, we were able to hone in on a specific and unique Avengers character with a connection to each of the fifty States—and more!”

“Marvel’s U.S.AVENGERS State Variants are a chance for our fans and retailers to show their home town patriotism paired with some of the biggest Avengers from the Marvel Universe,” says SVP Sales & Marketing for Marvel, David Gabriel. “We knew that a series with the name U.S.AVENGERS would evoke a sense of honor with all of our fans and we really wanted to go that extra step and offer a variant campaign that would allow our readers to show their hometown pride across this great nation.” 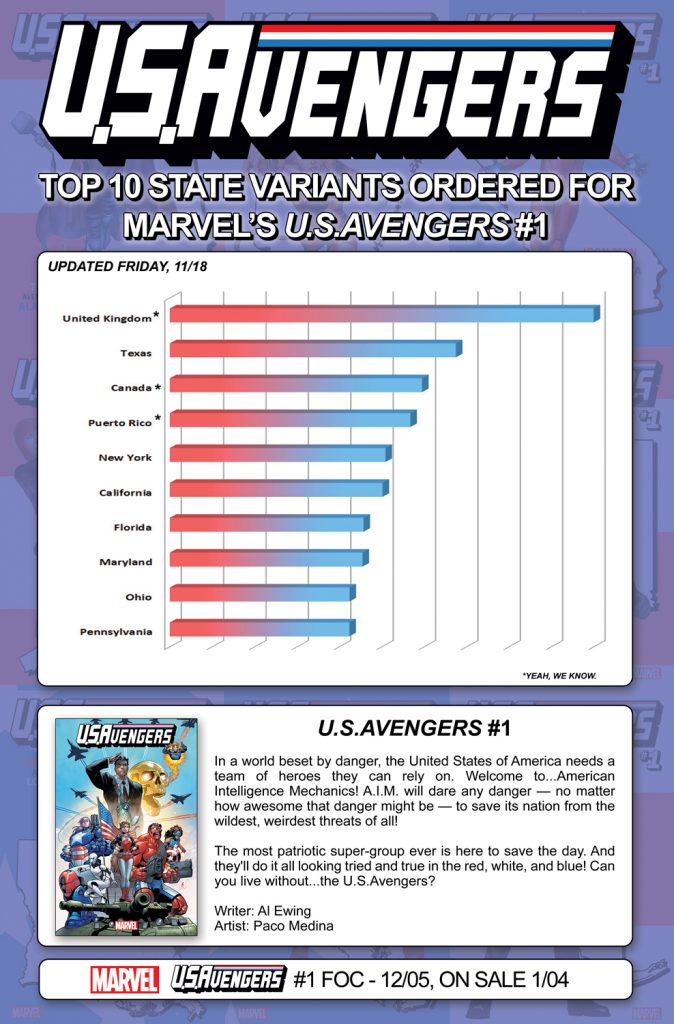 In addition to the U.S.AVENGERS State Variants – including Washington, D.C., Puerto Rico, and Canada, retailers who order each State Variant will receive an ultra-rare “Secret” Variant that is going to be shining gem for this variant collection and is sure to be sought after by all fans across the nation – and globe! 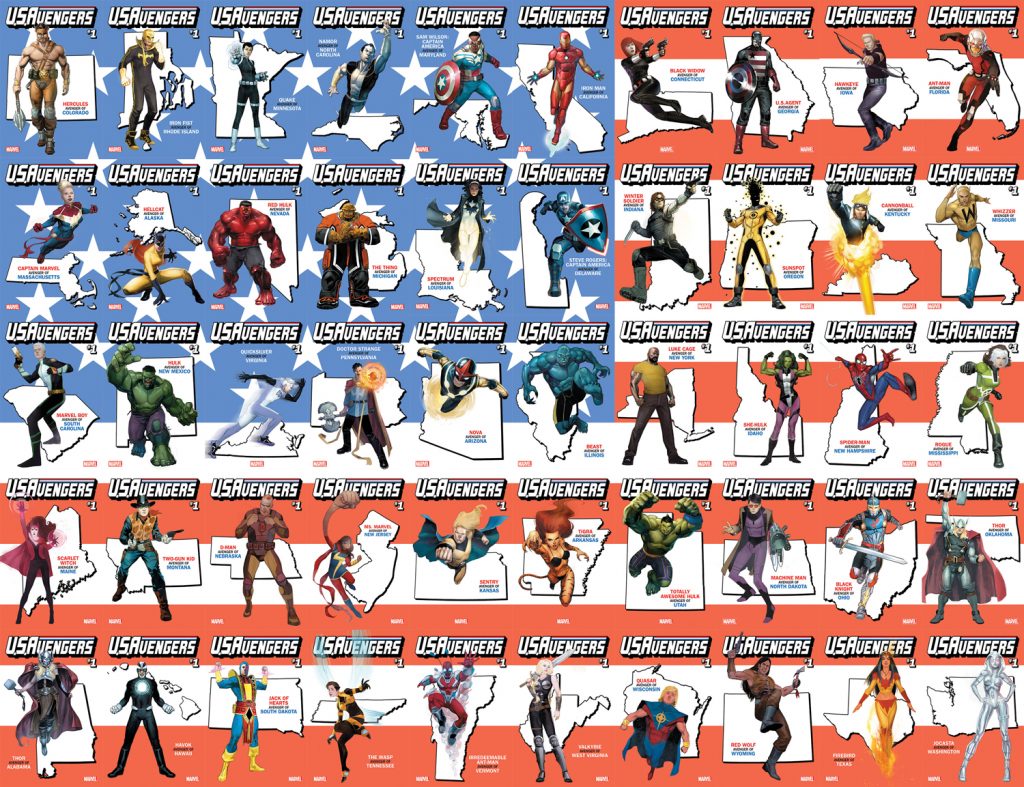 This January, the security of the Marvel Universe is fractured. The world’s first line of defense, S.H.I.E.L.D., can no longer be trusted. The United States no longer has a super-spy agency with its best interests at heart – until now. Prepare for the U.S.AVENGERS!