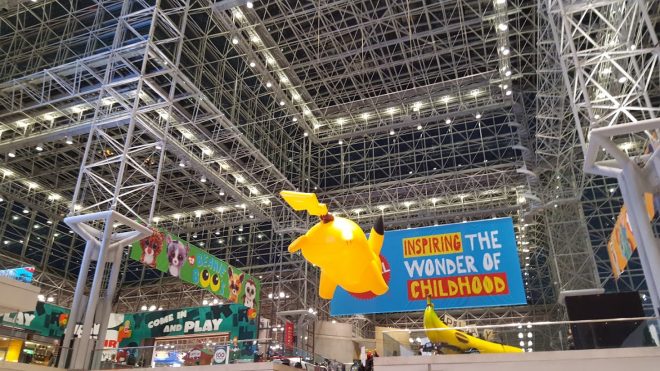 I’m so jealous of the press able to make it to this convention this year.  I feel like I just scratched the surface last year on the thousands of exhibitors that were there.  Some of those that will be at Toy Fair include Dark Horse, Merge VR, BlueFin, Funko, Aurora, Hasbro, and more.  Stay tuned for some feature articles.  Now for the official press release below:

Produced by the U.S. Toy Industry Association (TIA), Toy Fair is the Western Hemisphere’s largest and most important toy show, representing the vitality of the North American and global toy marketplace. Last year, U.S. toy sales grew 5% and are estimated to be $26 billion. The industry supports more than half a million American jobs and has a total U.S. economic impact of more than $80 billion.

Toy Fair 2017 boasts an impressive 443,000 net square feet of exhibit space brimming with the hottest new toys and trends – including outdoor and active toys, educational playthings, cutting-edge tech experiences, dolls, board games, licensed collectibles, and everything in between.

“New York City is where the creative spirit and energy of the global toy industry comes to life with more than 1,100 companies of all types and sizes exhibiting at the North American International Toy Fair 2017,” stated Steve Pasierb, president & CEO at TIA. “Many of the toys and games displayed here are being seen for the very first time – and are likely to top kids’ birthday and holiday wish lists throughout the coming year. We are thrilled to welcome the toy community from over 100 countries to Toy Fair for four, fun-filled days of buying and selling, trend-scouting, networking, and most importantly, play!”

This year’s show has expanded its exhibit space to include a special “Launch Pad” area that showcases unique toys and inventions from first-time exhibitors. The easy-to-navigate show floor has been divided into distinct product zones to help media, buyers, and attendees from all corners of the play industry find exactly what they need – whether they are in search of the next “it” toy of the year, looking to diversify product lines, in search of tried-and-true classics, or seeking the latest innovations in play.

World-class educational sessions and special events will be held throughout Toy Fair, including a toy trends briefing; licensing seminars; toy safety and compliance forums; global trade and market expansion research presentations; workshops for inventors and designers; and much more. A full schedule of show events can be found at www.ToyFairNY.com.