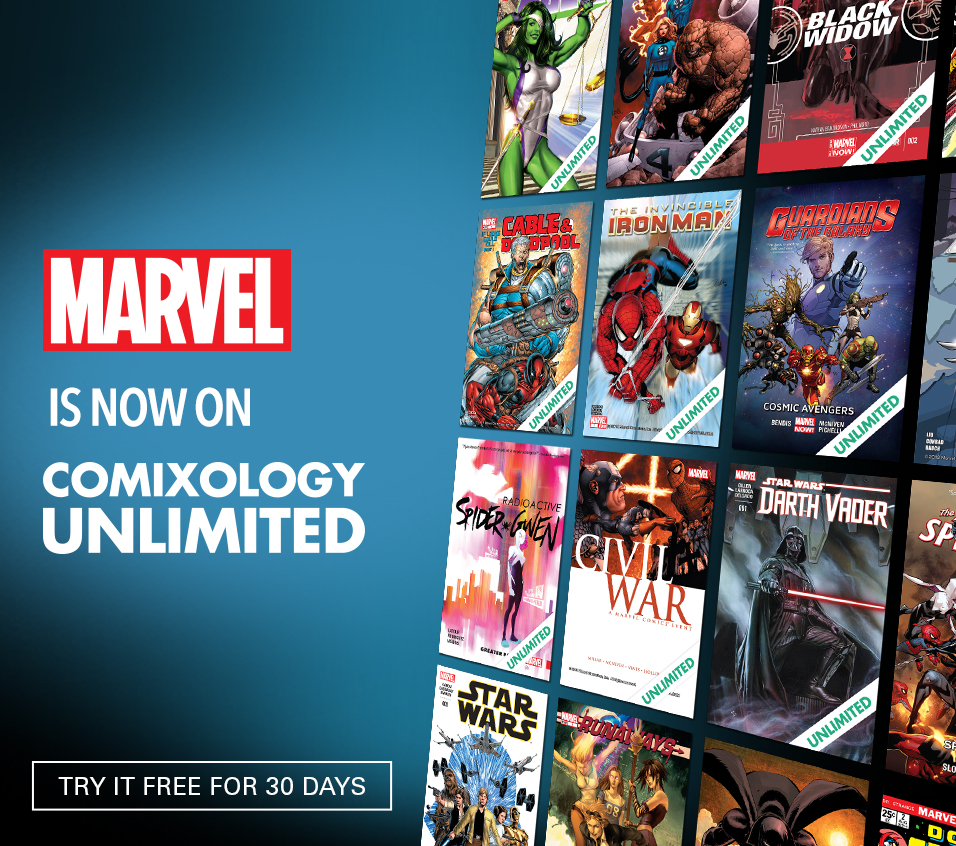 Earlier today Marvel and Comixology announced that Marvel’s titles would be available on comiXology, as well as some collected works on Kindle Unlimited and Amazon’s Prime Reading. Full details below as well as graphics courtesy of their press release.

Now there are three more ways for readers to enjoy Marvel’s acclaimed titles and characters like Guardians of the Galaxy, Spider-Man, Jessica Jones, Black Panther, Ms. Marvel and Iron Fist Some of the select bestselling Marvel Comics titles available on comiXology Unlimited today include:

Kindle Unlimited members today will have access to 40 critically praised Marvel collections, with 20 also available through Prime Reading, a benefit for U.S. Prime members. These titles include:

ComiXology Unlimited now offers over 10,000 comics, graphic novels and manga for just $5.99 a month with a 30-day free trial at comixology.com/unlimited and is available on the comiXology app for Fire Tablet, Android, iOS and on the web at comixology.com.

Kindle Unlimited offers over 1 million titles, thousands of audiobooks, and select current issues of popular magazines for just $9.99 a month with a 30-day free trial at amazon.com/kindleunlimited.

“We are thrilled to have part of Marvel’s vast library of Super Heroes join comiXology Unlimited, Kindle Unlimited, and Prime Reading,” said comiXology CEO and Co-Founder David Steinberger. “With the addition of Marvel Comics this is a great opportunity to discover and explore the best that comics have to offer. And for those just starting out reading Marvel Comics, Kindle Unlimited and Prime Reading are great places to begin.”

Fans across the globe have been attracted to Marvel’s amazing characters through top-grossing movies, critically-acclaimed TV series, and ground breaking new publishing series that have driven titles like Guardians of the Galaxy, Daredevil, and Black Panther to new heights, alongside perennial favorites like Amazing Spider-Man and Avengers. The expanded availability of Marvel content announced today between Marvel, comiXology, and Amazon builds upon Marvel’s single-issue digital comic book exclusive on comiXology and Kindle. About comiXology:
ComiXology, an Amazon.com, Inc. subsidiary (NASDAQ:AMZN), is a revolutionary, cloud-based digital comics platform. With content from over 125 publishers as well as thousands of independent creators from around the world, comiXology provides an unrivaled library of comic books, graphic novels, manga and bandes dessinées. The company’s first in class innovations include the exclusive Guided View technology which provides an immersive and cinematic reading experience and a new monthly subscription service. ComiXology is based in New York City, with operations in Seattle, Los Angeles and Paris. For more information visit comixology.com and follow the company on Twitter, Facebook and Tumblr.

About Marvel:
Marvel Entertainment, LLC, a wholly-owned subsidiary of The Walt Disney Company, is one of the world’s most prominent character-based entertainment companies, built on a proven library of more than 8,000 characters featured in a variety of media over seventy-five years. Marvel utilizes its character franchises in entertainment, licensing and publishing. For more information visit marvel.com.