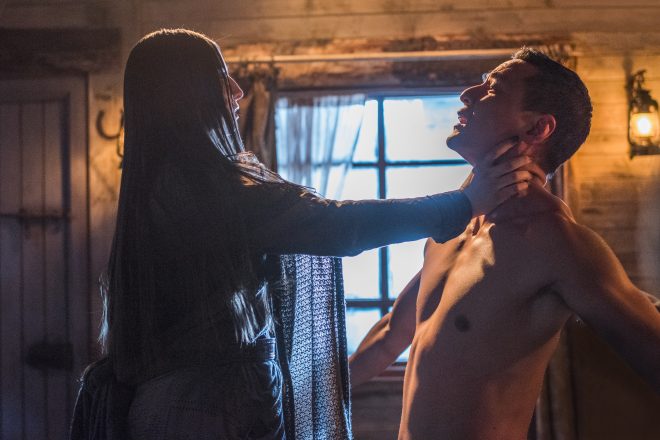 The Widow attacks Jade’s house, causing mutiny among the cogs and clippers there.  One of the cogs was brave enough to slap and kick Jade. A faithful clipper finds Jade and attempt an escape but is killed by butterflies. The Widow quickly defeats Jade.  Quinn is brought in at first to kill her.  However, after they talk Quinn decides to have Jade taken to the border.

Sunny (Daniel Wu) is in bad shape after his bout with the head abbott (Cung Le).  The guy put the technique “Hand of the 5 poisons” on him.  This means that major organs are shutting down then his heart.  MK (Aramis Knight) wants to go to the monastery to find a cure but Bajie (Nick Frost) thinks there isn’t one. During the ride to the monastery we find out why he left.  He trained a girl with much potential nicknamed Flea.  When he goes on a job to pick up someone with the gift from slavers, she comes along, cuts herself and kills everyone, including the people she was trying to help. Consequently, her gift was forcibly removed like MK saw when his friend got caught. Bajie used his gift to revive Flea and helped her escape.  He’s been trying to find her ever since.  The Badlands is the only place he hasn’t looked yet.

When they get there, Bajie reluctantly goes inside with MK finding not only the cure (which is on a scroll) but the compass.  He lies about finding the compass though.  They almost make it out but run into the Master (Chipo Chung) and the students during dinner.  Cutting up a few of the students causes chaos as they turn on the teachers.  MK and Bajie fight the Master for a bit while everyone else is fighting each other.  The Master is left to face those remaining while Bajie and MK make their exit.  The ritual to reverse the poisons works.  Sunny wakes from his nightmarish dream.

Sunny dreamed of living a quiet life with Veil (Madeleine Mantock) and an older Henry (Vaughn Endraca).  The boy wants to fight like his Dad, which Sunny is against.  Artemis (Hazel Doupe), the ghost from his first kill, causes problems by marking the pigs, giving Henry the sword, and marking Henry with his first few kill tattoos.  Artemis has been manipulating Henry the entire time.  Unfortunately, Veil sees Sunny with the sword and when Henry has his tattoos.  She wants to move herself and Henry into another town.  Henry kills Veil because he doesn’t want to go.  Sunny confronts Artemis, who is not surprised he doesn’t remember her.  He faces the ghosts of all of his kills, getting smothered by the countless bodies before he wakes up.

I enjoyed this Sunny-centric episode overall.  We learned more about why Bajie left the monastery, which offered another mystery.  The possibility is high that Flea is Minerva aka The Widow.  It makes sense considering her insistence last season about being able to help control the gift. However, it seems to me that she does not know how to completely control it because she lost her gift because of the incident with the cogs and nomads if that is her.

MK again is too loose with his mouth regarding the compass and Azra. I get that with Bajie’s story, there is some justification with leaving the monastery and comradery but that was not enough to start telling the man everything.  Now Bajie has the compass.  The master was right that MK should not trust the man.

This is what I don’t understand about both MK and Bajie with the Master.  There are people out there that have this gift.  With no control, innocent people have died.  The Master has learned to control this ability and has taught others, including Bajie.  Without that training, again, innocent people die.  Those that have the gift can learn and grow as people, face their demons in the process.  What is so wrong with that?  Do students have to know everything at once? MK doesn’t have the maturity to process what he wanted to learn from the Master.  I do think that the situation with Flea was not handled well.  She had good intentions and with more training it may have worked out.  However, I can see where there was a potential for more “accidents” which would have cost more lives.  Was that a risk the Master was willing to take?  I think no.  Now Bajie and MK left the Master hanging with dangerous people.  I think she will be fine but at what cost?

Sunny dreamed of the worst-case scenario.  The fear of his son getting his legacy of killing, Veil dying indirectly because of him, worse by their son.  The weight of him being a killer consuming him.  Acknowledging he doesn’t even remember his first kill is a blow as well.  If I recall correctly, Quinn mentioned that Sunny killed at a very early age.  I’m wondering if it was the same age as Henry in the dream? The dream also ties in with what Moon told him in episode 203 about not being able to live the happy life for long.  The sad part is that I feel like Veil would blame Sunny for their son wanting to become a fighter and if they were attacked all the time because of Sunny’s past.

I also liked how in the beginning of the dream that Sunny had no marks on his back, like he wanted to erase his past completely, and then how it built so he was overwhelmed by it.  Sunny’s struggle to recognize that he is a killer and the reasons behind it is still there.  Here is hoping that the dream is a step in the right direction to help him in what not to do.  I have hope in his journey.  The color scheme being more brown than black and white I think also was clever of the director in this episode.  It shows that Sunny’s situation was not a straight black and white but murky color with a little bit of brightness.

The title of this week’s episode fits in nicely with what happened.  Sunny’s heart, Quinn’s, even the Master’s could be considered black, the White Mountain could symbolize hope overall.

Something tells me that Jade will come back with a vengeance.  She is a survivor after all.  There is an irony to what Quinn does with Jade, considering that is what the other barons wanted the Widow to do.  Leave the Badlands.  I did find the conversation with Quinn interesting though.  Quinn wants to think that he was better than his son in every way but Jade shut that down hard.  Jade does need to admit to herself that she is manipulative though.  I thought she was treating the cogs better but maybe not if one of them wanted to slap and kick her. Maybe it was just the system itself she felt free from.  Here is hoping that Jade will learn some fighting skills eventually.

I’m looking forward to the next episode, which will feature a new fav character, Baron Chau!  What are your thoughts on the episode? Sound off below in the comments!