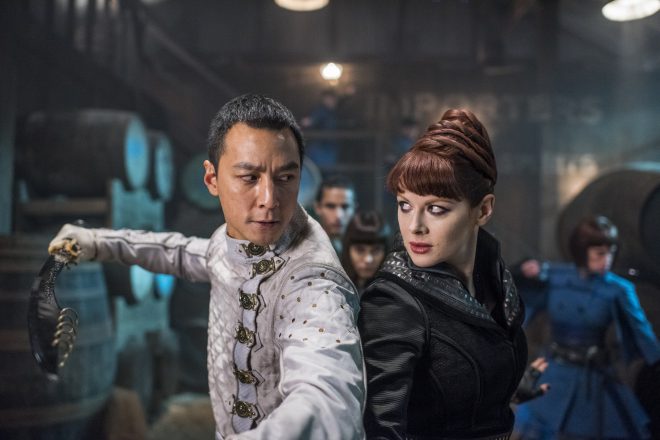 Sunny is finally in the Badlands!

Sunny (Daniel Wu) is closer to Veil in the Badlands in this week’s episode “Sting of the Scorpions’s Tail!” The title this week was an apt name. Let’s get to this recap/review!

Minerva (Emily Beecham) and Quinn (Martin Csokas) get to work quickly eliminating a few barons.  Minerva, who cut off Baron Hasan’s (Alan Wai) head, isn’t at all happy with Quinn’s murder of entire the Broadmore clan.  Well women can grow up to be ruthless too right?

While Quinn and The Widow meet, Tilda (Ally Ioannides) and the other butterflies remain with Quinn’s men. She is surprised to see Veil (Madeleine Mantock) and Lydia (Orla Brady) in the hideout.  She was not aware that Minerva had given Veil to Quinn. Seeds of distrust continue to be sown between Tilda and “Mother” by Veil, even as she acknowledges the mistake of leaving Quill alive.

Meanwhile Bajie (Nick Frost) books passage into the Badlands for himself, Sunny, and MK (Aramis Knight) by taking a bus which is supposed to drop them off near the entry point. Enter Baron Chau’s (Eleanor Matsurra) clipper force.  Sunny recognizes her men while Bajie figures out the smuggler got paid.  The bus is nearly destroyed as the group is taken into captivity.

Sunny demands to see the Baron, showing the guard his tattoos.  Baron Chau confirms to Sunny that Quinn is alive and aligned with the Widow.  She knows that she is next on the duo’s hit list.  Chau requests that Sunny be her regent. He of course refuses. Although Sunny won’t be Chau’s regent, he proposes to help kill the Widow by leading her into a trap.  He thinks the Widow will lead him and Chau to Quinn.  In exchange, Chau would leave him and his family alone.

In the holding area Sunny (dressed in the color of Chau’s clan), orders that MK be released.  He explains that the Widow believes MK, when cut, “unleashes a dark power.” The kid will be the bait. Baron Chau provides him with a small clipper force to take out the Widow. As they leave the cells, Bajie admonishes Sunny for leaving him hanging, not realizing until later that he dropped a key into his pocket.  Bajie escapes but then decides to follow Sunny and MK to a warehouse to watch the trap go down.

Tilda confronts Minerva about Veil.  After explaining that Veil had to be sacrificed because she wasn’t aligned with their cause, and because she tried to poison her. Chau’s “defector” is brought in by Odessa (Madison Jaizani).  The Widow takes the bait when he reveals that Chau is trading a boy fitting MK’s MO to the River King for supplies.  She arrives with Tilda and other Butterflies in tow to rescue MK, telling him he’s safe.  Sunny has a sword to her throat when she reveals that she has the location of Veil and Henry.  He teams up with the Widow to take down Chau’s force.  It’s a wonderful display of teamwork; something I’ve wanted to see since last season.  Tilda helps MK defeat one of the men of course.  It’s finally time to get Sunny’s fam!

During dinner, Quinn announces that he wants Henry as his heir.  In order for that to happen, he wants to marry Veil. Although she is less than enthusiastic, Quinn gives her no choice.  Lydia tries to talk him out of it to no avail.  Veil marries Quinn under duress with Lydia officiating.  Before the wedding, Veil has Lydia promise to take care of Henry no matter what happens. Quinn doesn’t know that Veil planned to kill him during their consummation.   Lydia, who coincidentally was caught trying to run away with the baby, interrupts that plan with word that Sunny is back teamed up with the Widow. Time to get ready Quinn!

I am so glad that all characters are finally in the same area!  It’s also good that it is before the season ended that Sunny is back in the Badlands.  The team-up with The Widow was fire! A well-choreographed fight scene for sure!

What is up with Bajie following Sunny and MK? Is he actually concerned for MK’s welfare, or does he think Sunny will lead him to Flea? I did find it interesting that he just watched while Sunny and the Widow fought Chau’s men.  Who knows if he will let Sunny know he was around next week.

While I agreed for the most part The Widow’s reasoning for turning Veil over to Quinn, now that Sunny’s back, that could bite her in the butt. There was no way to know for sure if:

I do believe that she would have kept Veil with her if she knew that Sunny was in the Badlands.  In fact, Sunny would have eliminated Quinn (again) as soon as possible probably preventing an alliance.   That battle is coming, and I can’t wait for the rematch of Quinn vs Sunny!

Sidenote: Does Veil know that she ruined Sunny’s attempt to kill Quinn by saving him? I could’ve sworn Quinn told her this in an earlier episode. I’m pissed on Sunny’s behalf for that.

Both MK and Tilda need to:

They are still young and they seem to have issues with seeing the big picture.  Tilda was seeing it until Veil put doubts in her head.  Not only that, she should’ve kept her mouth shut about Veil trying to poison Minerva.  Since her decision was to keep The Widow alive, there was no need to tell her anything.  I chalk it up to being young though.  With MK, he jumps to the wrong conclusions.  It didn’t even occur to him that Sunny was playing along with Chau so they could be closer to finding Veil and baby.  However, his ignorance at least made his reactions more genuine to throw Chau off the scent.

I did enjoy the reunion between MK and Tilda.  It was nice seeing them fight on the same side briefly.  Too bad that’s going to be short-lived once Sunny finds out about Minerva giving Veil back to Quinn. I loved Tilda’s fight scenes this week.  I feel like she hasn’t been in enough of them this season.

Veil has no business trying to advise Tilda because she only sees how the actions of Quinn and the Widow has affected her situation and not just the baron system that has been in place.   She is going to see the Widow causing chaos because the Widow trying to come after Quinn is what started the spiral of events up until their present.  Even if Minerva had left things alone, Veil’s parents would still be dead because of Quinn not wanting anyone to know about his tumor.  Both Sunny and herself would still be trying to get out of the Badlands and failing.  For some reason, I feel like Veil thinks she’s a better person than the Widow.  It would explain some of the pettiness and the strong belief she has the right of things.

I may be crapping on Veil, but I did feel sorry for her in that scene and what followed.  Mantock did a fantastic job throughout this episode, especially her scene with Brady showing the devastation and desperation Veil was feeling at the thought of marrying Quinn. Lydia’s stance was understandable while sympathetic.  That life is all she knows.  With the wedding the wardrobe department again made an excellent choice with the shade of red and elegance of the dress.  Lydia officiating was weird. Veil was so tempted to stab Quinn but went along with the ceremony.

Seeing the wedding night almost play out made me itch. Quinn trying to win Veil over with gentleness in his love making made me go:

You know Veil was doing this in her head:

Lydia’s timing is so impeccable.  Quinn was close to dying, man!  Leaving with Henry was fruitless.  I am wondering what Lydia was trying to accomplish? She saw the clippers distracted so my guess is she thought she would leave unnoticed.  Never mind what safeguards were in place after Veil escaped. I think another reason she wanted to leave with Henry was the chaos that would have occurred if Veil succeeded killing Quinn.

On a happier note, I was very ecstatic to see Baron Chau again! While she didn’t fight in this episode, she was rocking an outfit like she did in episode 4.  She also has an awesome book collection! There were some classics on that shelf! Ms Matsurra had great chemistry with Wu.  She was shrewd, confident, but pragmatic.  While that alliance was short, at least Chau knew the risk she was taking.  That’s why she sent a small clipper force.  Even though MK didn’t bleed, I’m wondering if she will now look for a boy with powers the Widow is looking for?  It would tip the balance in her favor when Quinn and the Widow come for her.

That slow-mo walk in white was everything! Wu is a handsome man that can wear many colors, including white! Thank you to the director and the writers for including that in the episode!

I can’t wait for the upcoming episode.  It looks like Tilda is following the path of Sunny in turning against their baron, although for different reasons. This is heartbreaking but will be interesting to watch.

What are your thoughts of the episode? Predictions for who will survive the season? Sound off below in the comments!