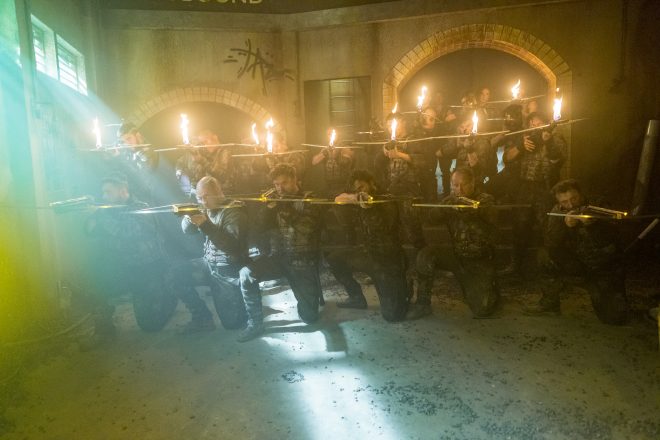 The showdown we have been waiting for came, but not everyone made it! What was up with that ending?!

The Widow (Emily Beecham) offers Waldo (Stephen Lang) to become Baron.  Since there is open territory, why not?  Waldo believes that if he took the position he would still be under her thumb.  He warns her about Sunny (Daniel Wu) or Quinn (Marton Csokas) coming after her.  Minerva is not worried.  Waldo is done with the Widow, but she cautions him that she is the only way to survive what’s coming. What the hell does that mean?

MK (Aramis Knight) meets with the Widow. She now wants to force MK to reignite his dark powers.  MK would rather die.  She brings Bajie (Nick Frost) in to bust him on his true motives.  She believes Bajie was after the book the entire time and was just using her back in the day.  Bajie of course denies it, considering he gave up his power for her to live.  MK questions the former abbot’s reasoning for going to the monastery and whether it was to save Sunny or find the compass.  Seeing Bajie trying to smooth things over, he leaves. The Widow wants Bajie to interpret the book for her hoping it contains info about unlocking the “gift” again.  Bajie now realizes that there is no hope for The Widow.

Tilda (Ally Ioannides) wakes up in a cell next to Bajie (Nick Frost).  She is still in shock that “mother” would hurt her.  Odessa (Maddison Jaizani) comes to the rescue but hesitates releasing Bajie.  Tilda, upon hearing that Sunny is the only one likely to defeat the Widow, releases Bajie so he can help Sunny get back his family.  They are about to get in a truck when a guard stops them.  Waldo vouches for them, saying they are on a mission for The Widow. Tilda hugs Waldo goodbye.

The Widow walks with MK outside.  MK isn’t buying her BS about looking out for themselves.  The Widow makes a deal. If she wins, he will be hers.  He will have to kill her first though which he promises if he gets his powers back.

Sunny (Daniel Wu) retrieves his bike and rides off to get his family.  Quinn (Martin Csokas) prepares for war, giving a rousing speech to his troops.  He honors Gabriel for his sacrifice by calling him hellfire.  My girl Lydia (Orla Brady) attempts to reign on Quinn’s parade by informing the men about the bombs their leader set up.  However, the men have no reaction.  Quinn orders her taken up to be executed but first wants her to dig her own grave.

Lydia digs the grave but escapes from the men by killing one of them and knocking out the other man.  The guy gives chase until Lydia runs into Sunny.  With the second man dead, Lydia warns Sunny that Quinn has the bunker rigged.  As thanks for the warning, Sunny gives Lydia one of his daggers.

At the bunker Quinn walks out along with several men.  Sunny makes it through several fire arrows (despite two making it on his chest and leg) before reaching Quinn.  Detonating one set of bombs, Quinn makes it further into the bunker with Henry.  Sunny is now buried under some rubble until Bajie (who was dropped off by Tilda) drags him to safety.

Bajie and Sunny make it through the next round of soldiers to Veil (Madeleine Mantock).  After a too brief reunion between Sunny and Veil and introductions for Bajie, the couple go get their son. Bajie meanwhile takes care of Jenkins, who interrupted Sunny’s reunion with his girl.  The former abbot takes care of the “sidekick” but is severely wounded in the abdomen by scissors.  He wanted to save the world darn it. Looks like Bajie is down for the count!

Veil and Sunny go to where Quinn is keeping Henry.  Quinn detonates another bomb, hoping to bury the parents.  However, both Sunny and Veil are unscathed.  Sunny and Quinn finally go at it while Veil gets Henry.  It’s evenly matched with Sunny briefly out.  However, Sunny manages to stab Quinn from behind in the chest.  Thinking it over Sunny takes the baby with Veil not too far behind. Sunny tries to go back for Bajie but he’s no longer in the chair he slumped into.  Sweet! The family starts to leave when Quinn, still alive, holds Veil hostage.  She sacrifices herself so Quinn can finally die.  Veil has Sunny promise to raise Henry good and have him remember her.

Sunny buries Veil next to the bunker.  He leaves with Henry to who knows where. Bajie stole Sunny’s bike to head to a turret with satellites on top.  Using the book and the compass, he turns on the machine inside.  He collapses saying the name Azra.  The episode ends with the machine making beeping sounds like it’s using morse code to reach someplace.

There was yelling at the TV for this episode, especially at the end.

The Widow has officially jumped the shark.  I’m disappointed but I’m also not surprised since we saw hints of this in season 1.  I’m glad that she didn’t kill Tilda.  Thank goodness for that! Looks like Waldo is wanting to dip out from the cause as well.  Does the Widow remember that there are two barons left that will probably come for her?  It’s a wonder she wasn’t attacked soon after the bomb detonated in last week’s episode.  Thank goodness Baron Chau (Eleanor Matsurra) is still alive!  I want to see another round between her and the Widow.

Now MK thinks he could defeat the Widow with his powers.  He is in another situation where he is not where he wants to be.  Can the kid catch a break? The thing with that though is he could’ve controlled his powers if he had stayed with the Master.  And why is he still so surprised that Bajie is all about himself? He was suspicious before why does he keep believing the BS?  My guess is it will be MK vs. The Widow next season. Can you imagine if The Widow did get her gift back? *Shivers* Maybe that was what she was hinting at to Waldo.  She is not going to be happy once she realizes that Bajie is gone with the book and the compass.

I can eat crow to a degree.  Odessa came through for Tilda.  Now they are off to somewhere, thanks to Waldo. I feel bad for the man.  That is twice that someone he advised felt the need to dip from the Badlands because their baron was going crazy. I hope to see more Waldo next season.  I think he would be a good baron.  A lot better than Ryder, that’s for sure.  Hopefully Tilda and Odessa run into Sunny and give him a ride.  Wouldn’t it be something if they ran into Jade (Sarah Bolger)?

I loved that Sunny rode the bike!  I missed it since last season!  It was a nice throwback to the series premiere!  Lydia and Sunny have shared like one scene in season one so it was nice to see the characters interact after so much has changed.  There seems to be a mutual respect with each other.  I think Sunny would have an ally in Lydia if he needs assistance.

Those soldiers should have listened to Lydia.  Now they are all dead because they drank that Quinn Kool-Aid.  He does give rousing speeches.  When Sunny was fighting the soldiers a few of the moves reminded me of the movie “Kill Bill.” I also felt like it was a video game with Sunny moving up one level before facing the bad guy.  Bajie displayed some major skills, especially with the nunchucks! I loved the glass drop after killing the “sidekick.” With each episode I have noticed Bajie’s fight skills have lasted longer and have become more intricate.  I now believe he taught Minerva long ago, whereas at the beginning of the season it was iffy.

The final battle between Quinn and Sunny did not disappoint! Quinn was a formidable opponent who would not go quietly.  I yelled at the TV when Sunny did not cut off his head.  Now Veil is dead! She gone y’all!  That reunion was so sweet and sad!  Veil had to do it though.  There was no way Quinn was leaving her alive anyway.  At least she made the decision and not Sunny.

Veil’s death was foreshadowed this entire season, especially with the dream Sunny had in episode 7.  Despite my issues with Veil, I was hoping Sunny would get that happy ending.  He deserves it for the trails he went through to get back to Veil and Henry.  What is Sunny going to do now? How is he going to take care of his baby and try to get MK out of the Widow’s clutches?  What I’m hoping for is that if there is another love interest (not too soon) I’m hoping it’s another POC.  I don’t see enough POC couples in dystopian/fantasy genres.  This is one reason why I liked Sunny and Veil together.

We now know that the book contains a way to contact Azra.  Bajie must have figured this out before escaping with Tilda.  Or did he have an idea a long time ago? I really hope Bajie somehow survives.  He has been comic relief this season and I also enjoyed his shadiness.  I want to know more of his secrets! Bajie has helped Sunny several times, I think he needs to stick around to do good for the world while serving his own interests.

What did you think of the finale? What do you want to see in Season 3? Sound off below in the comments!