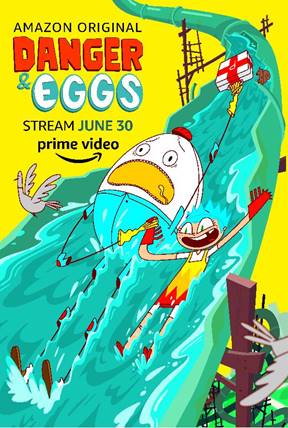 Earlier today Amazon announced that their new kids series Danger & Eggs will premiere on June 30th on Prime Video (in both the US and UK). The series features quite a collection of good voice talent, and the executive producers behind it are Mike Owens, Shadi Petosky, and Chris Hardwick. More information below courtesy of their press release. 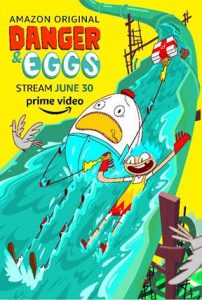 All 13 episodes, created by Mike Owens and Shadi Petosky, and executive produced by Owens, Petosky, and Chris Hardwick, will feature the voice talent of comedians Aidy Bryant and Eric Knobel

Danger & Eggs follows the endless adventures of a fearless, teal-haired girl named D.D. Danger (Aidy Bryant) and her ever cautious best friend, a giant talking egg named Phillip (Eric Knobel). As the daughter of world-renowned stunt daredevil, Roy Danger, D.D. is following in his footsteps and is always chasing her next big thrill. Luckily for her, Phillip is always there by her side with jerry-rigged safety mechanisms to make her thrill-seeking dreams come true. Together, they go in search of new adventures at their favorite spot, Chicken Paw Park, which is home to Philip’s mom Becky, a gargantuan chicken. The first season finds D.D. and Phillip meeting a raccoon with a thirst for technology, being sucked into a mysterious underground science lab, discovering a lonely robot in an overgrown garden, and taking on a famous zip line. Throughout their journey, they overcome obstacles with the “Buddy System” because even though they are polar opposites, their differences complement each other’s strengths and weaknesses to solve problems. Their Buddy System mantra says it all, “You look out for me and I’ll look out for you!”

“We are excited to introduce our first animated comedy for children ages 6-11 to our customers,” said Tara Sorensen, Head of Kids Programming at Amazon Studios. “We feel incredibly lucky to be working with the caliber of creative talent behind this series.”

“For us, the heart of Danger & Eggs is the friendship between Phillip and D.D. that proves you can face fear and danger and have a blast in the process because you are not alone,” said Mike Owens. Adds Shadi Petosky: “We can’t believe we get to take out our anxiety on a show–putting our inside voices into these characters and seeing if they stay friends.”

“I’ve been passionate about animation my whole life and to produce this series with my animation company fulfills a lifelong goal,” says Chris Hardwick, Executive Producer. “This show is funny, touching, and has incredible design–everything I’ve wanted to make.”

Below are what customers have said about the Danger & Eggs pilot:

Danger & Eggs is part of Prime Video’s growing line-up of award-winning and critically-acclaimed Originals for kids and families. All 13 episodes from the series will be available to stream and enjoy using the Amazon Prime Video app for compatible TVs, connected devices, including Amazon Fire TV and mobile devices, or online atwww.amazon.com/kidsoriginals, at no additional cost to their membership. Prime members can also download select titles to mobile devices for offline viewing. Eligible customers who are not already Prime members can sign up for a free trial at www.amazon.com/prime. For a list of all Amazon Video compatible devices, visitwww.amazon.com/howtostream. Danger & Eggs is also available as part of Amazon FreeTime Unlimited, the all-you-can-eat subscription service designed from the ground up for kids. FreeTime Unlimited is available exclusively on Amazon devices, including Amazon Fire TV and Fire tablets, and a year-long subscription is included with every Fire Kids Edition.

In addition to Prime Video, the Prime membership includes unlimited fast free shipping options across all categories available on Amazon, more than two million songs and thousands of playlists and stations with Prime Music, secure photo storage with Prime Photos, unlimited reading with Prime Reading, unlimited access to a digital audiobook catalog with Audible Channels for Prime, a rotating selection of free digital games and in-game loot with Twitch Prime, early access to select Lightning Deals, exclusive access and discounts to select items, and more. To sign-up for Prime or to find out more, visit: www.amazon.com/prime.