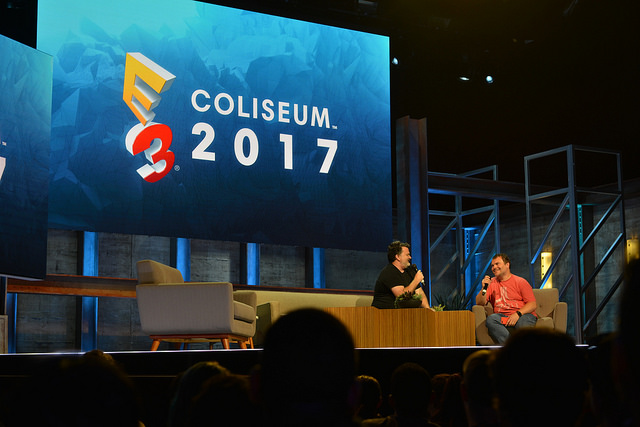 Welcome to all those in Nerdland! Antonio is back here at The Nerd Element to talk about every gamers most anticipated time of year… the E3 Electronics Gaming Expo 2017.  I’ll be providing my opinion of E3, in the form of warnings as well as accolades, to those who weren’t able to catch all the major announcements.

It is my feeling that E3 as a whole this year was pretty lack luster from all sides. The majority of E3 presentations contained information gamers already knew about, as well as a slew of remastered games. For example let’s take Sony, and before anyone says anything I am all for Sony as a gamer, but come on guys who really was asking for Final Fantasy VR Fishing? With that let’s get into the bad of E3.

Another Assassins Creed game…and yes I already hear you saying, “Come on Antonio we love the franchise.” That’s fine, but I how much story is there to tell for the series? And doesn’t it get a bit boring after a while? I also need EA do something else please! Skyrim VR and Nintendo Switch….. really Bethesda,  let the game die already! Not to mention the sheer number of VR remakes ugh. Microsoft no Halo announcement, isn’t that your money maker considering most of your stuff is shared with PC and PS4? Still no Kingdom Hearts 3 release date….no surprise there.  I regret watching Ubisoft, mostly because I was so incredibly excited and they usually provide a great press conference.

Holy crap! The Evil Within 2 aka Bethesda redeems itself! Yes please. This is what I want to see instead of Skyrim. Dragon Ball Figher Z looks so lit?  Curious as to why it was released during the Microsoft presentation. Ubisoft and Nintendo teaming up for Mario+Rabbits Kingdome Battles was actually somewhat impressive. Sony gave us Horizon Zero Dawn DLC with a 2017 release date, and if you didn’t know it’s one of the best games out there. Destiny 2 which we already knew about, looks so good! Spider-man yes please! Again it looks amazing. Let us know your thoughts about E3 in the comments below. Excited? Tell us why. Catch you later, and thanks for reading.