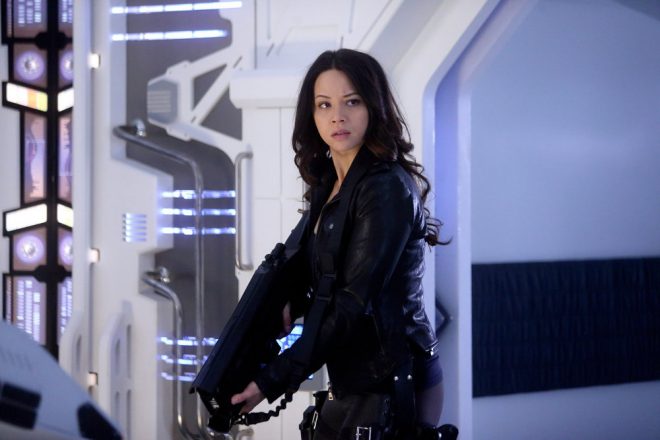 One of my fave summer shows, Dark Matter on SyFy, premiered last week.  The Raza crew’s leader Two, played by Melissa O’Neil was in mourning one episode, then confronted King Ryo Ishida (Alex Mallari Jr) through his clone in the next episode. O’Neil’s portrayal of her character has been spot on since the first season. I am very much looking forward to seeing how Two will grow this season, while continuing to kick butt against her enemies.

Through viewing O’Neil’s participation on the 2016 SDCC Dark Matter panel, and talking with her personally during past press conferences, I’ve discovered that O’Neil has a funny bone and a vibrant personality.  I was hoping to meet her soon at a convention after already meeting Zoie Palmer (Android) and Roger Cross (Six) in person at Great Philadelphia Comic Con last year.  That wish will be granted this weekend at Awesome Con in Washington DC! Palmer will also be attending with O’Neil to represent Dark Matter!

Before I finally lay eyes on O’Neil in the flesh, she was gracious enough to answer a few of my questions regarding Awesome Con, reflect on what happened during the show and tease what’s coming.   This will be Melissa’s first time in DC, but there won’t be enough time to sightsee. Boo! I tried to be subtle with some of my questions but apparently the answers are too spoilery.  At least the suspense means I’m thinking in the right direction. Enjoy!

I’m looking forward to being there! Thanks for wanting to chat with me.  The panels are stand outs for me when it comes to Cons. Fans of Sci-Fi love the details and they enjoy discourse so it’s always blast to for me to get nerdy about the show with a group of like-minded folk AND cast members who I likely wouldn’t otherwise be travelling and spending time with.  It *is* my first time to Washington DC!

Two got some advice from Commander Truffault in the premiere episode.  What did you enjoy about doing that scene? Will there be more scenes like that this season?

I love working with Torri Higginson. She is a classy, intelligent and beautiful to boot – I love what she has done with this character. I particularly enjoy two-handed scenes. A scene that has been stripped down to two people sitting across from each other at a table talking about what it means to be a leader — that’s the kind of scene work that a gal like me gets a little giddy over.

Will there be more scenes like this in the season? …  Stripped down two-handers between two characters talking about core elements of what it means to be who they are?

It was a nice surprise seeing Nyx as a hallucination.  What was your reaction when you first read it in the script?

I was thrilled! The actress who plays Nyx, Melanie Liburd, has become a dear friend and we were both very happy to see that Two and Nyx would have the opportunity to share a farewell. It was a beautiful scene and Mel is a joy to play off of.

What will Two miss about Nyx the most?

How soon will Two find out that Four did not know about Nyx being dead?  Does her feelings change at all regarding Four’s betrayal as far as the level of it?

This is a spoiler-y question. Not soon enough!

We learn in the 2nd episode that Five has a sister out there! Will we learn even more about Two/Portia’s past this season?

Wasn’t that an amazing reveal? I was on my phone texting Joe Mallozzi (our showrunner) and telling him how much I loved Five’s entire backstory. I think that thread will become quite the fan favourite. And, yes, we will learn a bit more about Two/Portia’s past. We continue to learn quite a bit more about everyone’s past this season.

This is the 2nd time that someone from the Raza crew has betrayed the others.  If Nyx had not died, would Four’s betrayal still be worse than Six turning everyone in to the GA?

This feels a bit like comparing apples and oranges. That said, if Nyx had not died, I don’t think Two would have felt as vengeful. The death of a crew-mate turned our newly minted and self-interested emperor into a personal enemy.

How soon will Four retaliate now that his lab station is gone?

Well, we’ll all have to tune in to find out, won’t we?

How long will the tentative truce between Mikkei and the Raza crew last?

You’re not even being subtle about these spoiler questions, anymore! What’s going on here? 😉

Does Two understand Ryo’s position as King at all and the decisions he makes are in the best interest of his people?

Yes. I think that Two has always possessed a level of empathy for everyone around her and that extends to her working to understand the motivations of others. I do feel that when one of her own is at risk, or has been hurt or wronged – she does tend to see red and go a bit extreme with her reactions. White Knight syndrome, I suppose.

Last year at SDCC you mentioned how you like to read up on tech and immerse yourself into a topic.  Have you researched anything interesting since last year in between filming Dark Matter?

Love this question! Thanks for asking! I was away on a trip and devoured Sapiens: A Brief History of Humankind by Yuval Noah Harari. It was incredible. He ties together and makes accessible a most impressive span of topics, all while maintaining a conversational tone with sprinkled in bits of humour. I’d read it again but I gave my copy away because it was so enjoyable that I felt compelled to share it, read: force it upon an unsuspecting fellow sapient. After that, I started and am still in the middle of “The Tao of Physics: An Exploration of the Parallels Between Modern Physics and Eastern Mysticism” by Fritjof Capra. Suffice it to say, I’m standing at the base of a mountain, the summit of which I cannot see, and whether or not I reach the top… I’m looking forward to the hike.

What else can you tease about Season 3?

This season feels a bit different from the first two. There is a levity that I think fans are going to be pleasantly surprised by.

The show balances drama, action, and Sci-Fi camp that people love. A couple of these scripts that were heavier on the comedy side, had us in stitches straight off the page and I think people are going to be left smiling and wanting to see more of the characters they love in these unconventional situations.

Thanks Melissa! I’ve already got a potential cool photo up idea which I hope to do!

What do you think of the season so far? Are you also looking forward to seeing Melissa at Awesome Con? Sound off below in the comments!