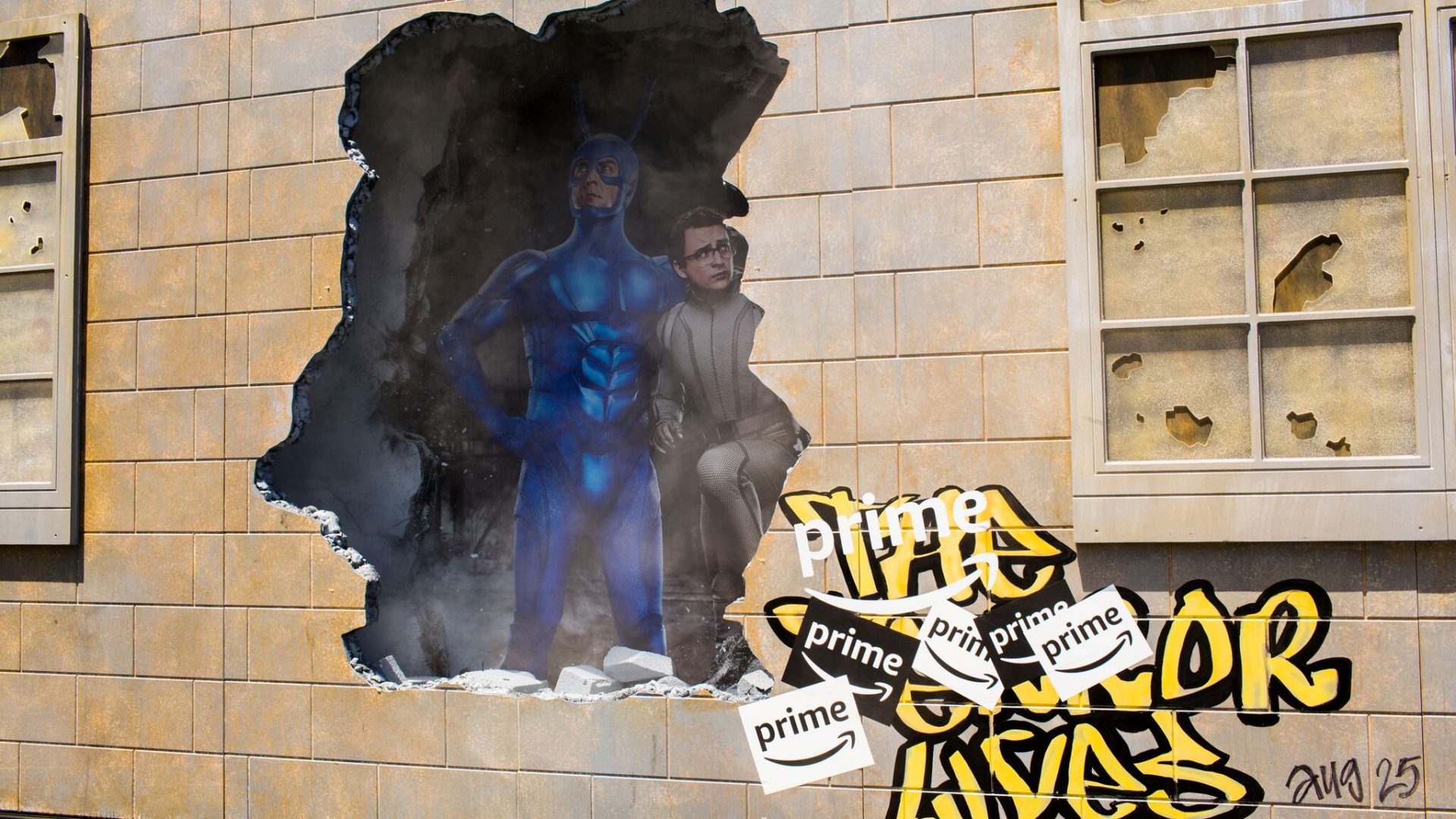 Amazon Studios pulled out all the stops at San Diego Comic-Con 2017 to promote its latest original show, the new live-action iteration of “The Tick.” In addition to a panel on Friday, July 21 in Room 6A with the cast and creators, Amazon Studios set up a “Tick Takeover” on the MLK Promenade just down the street from the Convention Center. Team Tick members also roamed the Gaslamp and outside the Convention Center, ready to assist citizens in need.

The Tick Takeover was one of many “activations,” as the off-site experiences are known. The experiences seem to have become a bigger draw each year, as the hours-long line-ups show. As more of these attractions have cropped up, the studios who present them have made them more and more elaborate and special. For example, to access HBO’s “Westworld” activation, participants had to line up in the Hilton Bayfront Hotel lobby to get a return appointment time. The attraction itself was held in the Gaslamp Quarter.

With such stiff competition, Amazon had to go big with its own activation, and the Tick Takeover totally delivered in a super-keen way. The following is my own experience with the Takeover, which was so much fun that I wanted to immediately do it again (but couldn’t because the lines were crazy busy all Con long).

The Takeover started with citizens (as the Tick calls the people who live in The City he super-heroes for) registering for their bracelets, which contained a chip that would come in handy during the ensuing scavenger hunt, at the Amazon Prime Member Lounge. The Lounge had blowing fans to keep citizens cool, TVs screening the pilot episode of “The Tick,” and charger cables for phones and other electronic devices. There were also opportunities to earn digital badges in order to win Tick swag.

Once this stage was completed, a Team Tick member escorted groups of citizens to the next part of the activation—a chance to manipulate the antennae on the giant 20-foot animatronic Tick head at the next station. Large levers allowed citizens to move the antennae based on a set of emotions, such as “excited” or “confused” (I went for “dazed”). Right after, we were allowed to design our own prize (a shirt, koozie, or tote), each which had The Tick’s head and a slogan (we were given two to choose from). The prize would be ready at the last part of the experience.

Now the real fun began: We were ushered into Goat’s Deli, where a lone clerk sat reading the paper. The televisions in the Deli lit up suddenly as Arthur (Griffin Newman) interrupted the feed to let us know our help was needed. We had to hunt for clues/items and collect as many as we could to help the Tick and friends defeat evil-doers. My group immediately started sifting through the items in the Deli looking for…well, we didn’t know what. We got so excited that we started scavenging without knowing what we needed to find! To his credit, the actor playing the clerk never broke character and never put down his paper to tell us we were prematurely searching. Oops!

As soon as Arthur’s message completed, some “agents” escorted us out of the Deli to Arthur’s apartment to look for the actual items. Our bracelets allowed us to “scan” in when we found the blue-lit clues (connected to tablets) and “collect” the items. Some were just scan and collect, and some had questions that needed to be answered before the item could be secured. It was a free-for-all as our group went through everything we could see trying to find the blue lights, made more frantic as the agents kept telling us to hurry because time was running out (we had two minutes before we were moved to the next location).

The next room was similarly frantic as we searched The Warehouse for more clues. Once time was called, we were rushed into The City Police Station to find out what type of super-hero we were. Most folks were “Super-Citizens,” meaning they’d found at least two of the items/clues. I was deemed “The Invisible Man or Woman” because I’d found a lot of items/clues (they didn’t tell us how many, but the Team Tick members I talked to after said that my ranking was high up there). The swag we’d “created” earlier in the experience was ready for us to pick up as well.

There was one last fun thing to do in the Police Station, though: film a brief pose next to a green screen that would then be animated for us. The camera was set up on a rail that allowed it to move in a short seven-second arc around the posed citizen. There were two scenarios: flying and explosion. I chose explosion. Let me tell you, holding still for seven seconds, as quick as that sounds, was not easy at all, but the resulting video was worth it:

The moving/multiple camera(s) and/or green screen experience was a popular one; a version was used at D23’s Duck Tales exhibit, and FX had a moving room for “Atlanta” that when filmed, made it look like you were walking up walls. FX’s “Legion” activation allowed you to film at GIF at the end doing whatever you wanted for a few seconds (I chose trying to levitate an unseen object).

Doing the Tick Takeover was a whole load of fun, from the relaxing moments in the lounge to the frenzied search for blue lights to the stillness of posing in front of the green screen. The rooms were all well-decorated, too; part of the fun was seeing what things Arthur keeps lying around, or what the headlines were on The City News. That the entire experience was free was tasty icing on the cake of justice. As the Tick himself would say, it was “Neat!” (More pictures from the activation below the next paragraph)

Stay tuned to The Nerd Element for our complete coverage of “The Tick,” including our review of the new season, and interviews with the main cast and the creators leading up the series dropping on Amazon Prime on August 25, 2017. We’ll also be recapping the show for all your Tick needs.