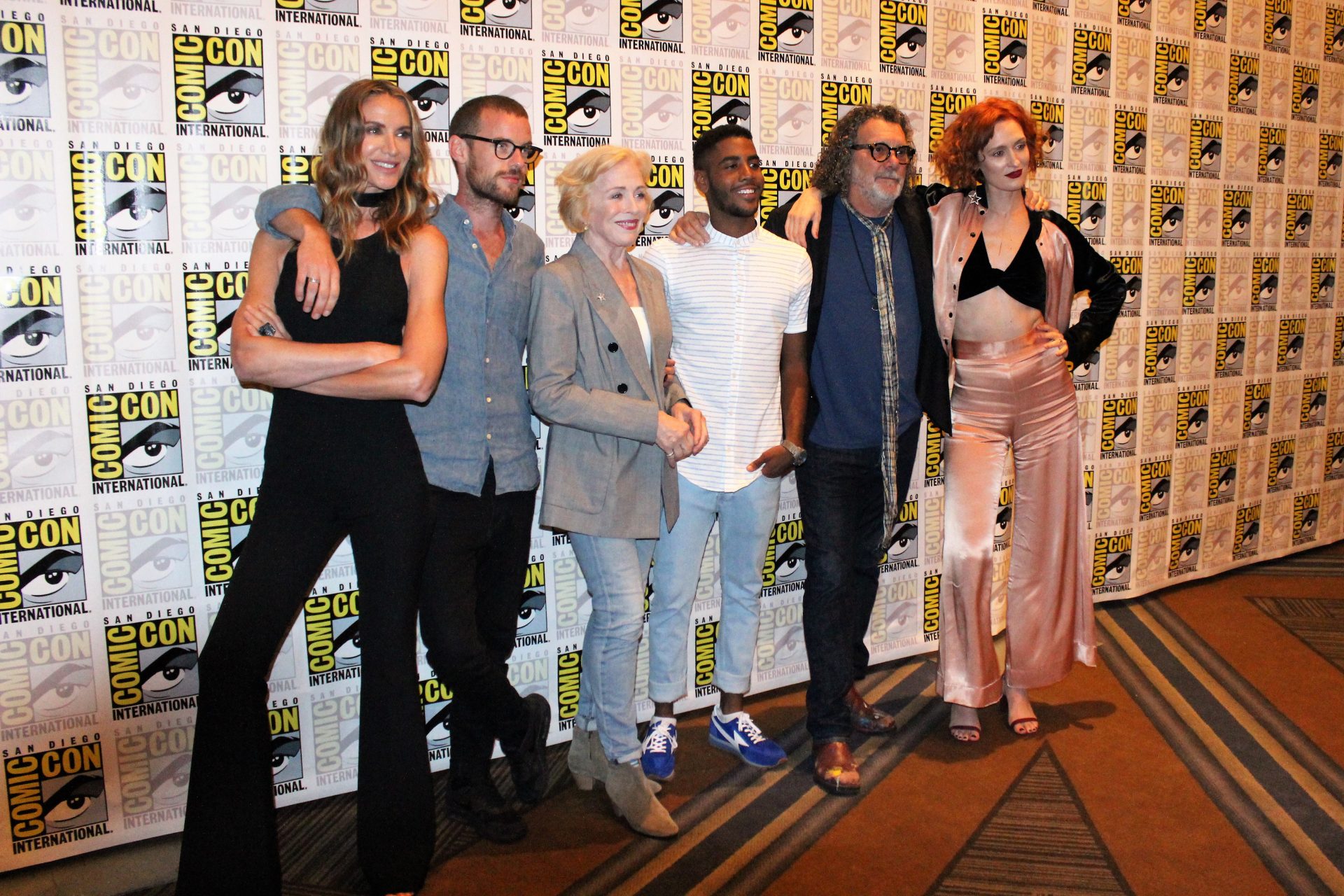 This is the second of our sets of roundtable interviews* with the cast and crew of AT&T Audience Network’s new series “Mr. Mercedes” at San Diego Comic-Con 2017. In addition to interviewing Holland Taylor (Ida Silver), Jharrel Jerome (Jerome Robinson), and Breeda Wool (Lou Linklatter), two of the other participants were Harry Treadaway, who plays Mr. Mercedes himself, Brady Hartsfield; and Kelly Lynch, who plays Deborah Hartsfield, Brady’s disturbed mother (the interview with creator/executive producer Jack Bender will be posted separately).

Treadaway’s most recent TV role was as Dr. Victor Frankenstein in the re-imagining of Gothic stories, “Penny Dreadful,” which ran for three seasons on Showtime. He’s also appeared in Control as Joy Division musician Steve Morris, as well as past TV series “Meadowlands” and “Truckers,” the latter of which aired in the UK.

Lynch’s TV credits include playing Ivan Aycock on “The L Word,” Laurel Cooper on “90210,” and Meg Bannock on “Magic City,” along with numerous other TV and film roles, including Doc in the Patrick Swayze fan favorite, Road House.

Below is a sampling of their responses to several similar questions that were asked in the course of the roundtable:

On the characters each plays in the show:

Harry Treadaway: Brady Hartsfield is a young man who lives in Ohio in 2011 and he works at the local electronics store. He also runs the ice cream truck. The kids love him. He’s also a psychopath who’s committed a mass murder that hasn’t been solved yet, and he starts the theories taunting the retired ex-cop played by Brendan Gleeson with emails saying, “Hey, man, you promised that you’d find me and you never did. When you gonna catch me?”

[T]his is one of the most disturbing individuals you could hope to meet. He’s a young man who’s been born with no empathy, whether it’s nature or nurture—maybe a bit of both—but he literally has no empathy for any human being or any part of life, and what gives him pleasure and what calms him is to imagine incredibly violent acts and to act them out. So it’s really dark, but there’s almost a strange, warped, I hope pleasure or joy in watching. [H]e’s just a great character written by a master of the psychopath genre—do you know what I mean? Stephen King [is] able to anchor it and gives roots and clues along the way as to maybe why they are the way they are. I think he offers that beautifully with the relationship of the mother played by Kelly Lynch.

[Hartsfield’s] been brought up by someone who has taught him that it might be okay to kill, who has abused him physically, and who has not really been a great person as a caregiver, and that married with whatever he was already born with have collided to bad effect.

Kelly Lynch: I think incest is one of the most hard to forgive situations between two people. […] Reading the material and understanding, as you do when are an actor—at least, I don’t judge my character. My job is to try to find out why they are the people they are, how they got to be the people they are; whether they’re good people or bad people, I’ll let the audience make that decision because I like Deb Hartsfield and I think she’s trying to be a good mother, and I think she loves her son, and I think the organic way that their dysfunctional relationship ended up in this place makes perfect sense to me.

On reading Stephen King’s “Mercedes” novel in preparation for the show and meeting Mr. King:

HT: For me really, the blueprint of this whole thing was Stephen King’s novel; it’s such a rich, detailed, brilliantly written book that gives you—that gave me so many clues and so much information for the character. […] I would take it to set; I’d underline it and highlight it; it was always there as a constant source of who this character in this world was.

[I] read the first one and the second one; I thought I’m saving the third one in case—that will be a treat if we go again, if we do another series, I will read the third one. Hopefully I’ll get to read the third one—but either way, I’ll read it. I think Stephen’s writing a fourth one as well.

KL: I am a super-Stephen King nerd; not just, “I’ve read a couple of his books and he’s really good”— I’ve read everything. […] I think Deb Hartsfield’s one of my favorite characters I’ve ever played and I’m honored to play her, and I was handed a piece of gold: “Here’s a great part for a woman your age!” If you want to be an actor, and you want to do something difficult and multi-layered—you know, she’s a monster, she’s a vulnerable human being, she’s surviving, she’s creating parts of this boy’s [psyche]—it was like 5-dimensional chess.

[King] visited the set and…what an honor! And you know, he doesn’t like everything that he’s been involved with as far as how it works outside of the books, [but] he is such a fan of this, and we are so happy.

(For the record, Ms. Lynch’s favorite King novel is “Carrie”: “I was such a nerd in high school. I mean, I was this tall in third grade and skinnier than I am now. I wasn’t the hot girl in school; I was the weirdo. I liked comic books and I liked movies and I read a lot…. [H]igh school and junior high school were such horrible times for me…. [T]hat book just hit it on the head for me.”)

On the character’s effect on the actor’s real life:

HT: I hope not! (Everyone laughs) I haven’t got a part-time job as an ice cream guy.

KL: When they say “Cut,” even on set, I can pop in and out of who I am playing. We’ve—and Harry is the same way—I felt like we are on the same tribe, he and I, and we got along right away and we felt our way through this right away very easily. I don’t take my work home with me—I just don’t. I do my homework and think about the work I have coming up, and hopefully we don’t rehearse it to death because it’s not like doing a play where you’re calibrating every point in the text and moments on stage. On film, you want to keep things alive and not kind of belabor them, at least for me, so when it was done, and the weirdest stuff, we would end up laughing at some point because usually, it seemed like the thing to do…. That’s how you get through this stuff, at least for me. I don’t wallow in the sadness of my character.

Random related tidbits from all the actor and actress interviews:

If you look, a lot of psychopaths, a lot of people that commit acts of violence, they’re not hiding when they do it. They’re living normal lives; they work in the supermarket, they work in the train station, they’re teachers or they’re doctors or they’re CEOs; they’re not necessarily the person that you’d pinpoint…. I think that’s what’s so interesting about it, that he’s a fragile young man who works in an electrics store.

Lynch on whether it’s better to adapt King in movie or TV series form:

TV show, without a doubt. It’s too multi-layered…even in a character, there’s too many levels and colors and things to try to distill that into 90 minutes. It’s just a recipe for disaster, I think, for the most part.

Treadaway and Breeda Wool on the chances of a second season:

Treadaway: I think that will be a decision when it comes out and we’ll see how the cookie crumbles.

*For those who might not be familiar with the term, a roundtable interview is when groups of reporters are seated at various tables, and the interviewees “make the rounds” of each table.

‘The Shape of Water’: Strong & Strange Oscar Movies, But Will Be a Harder Sell