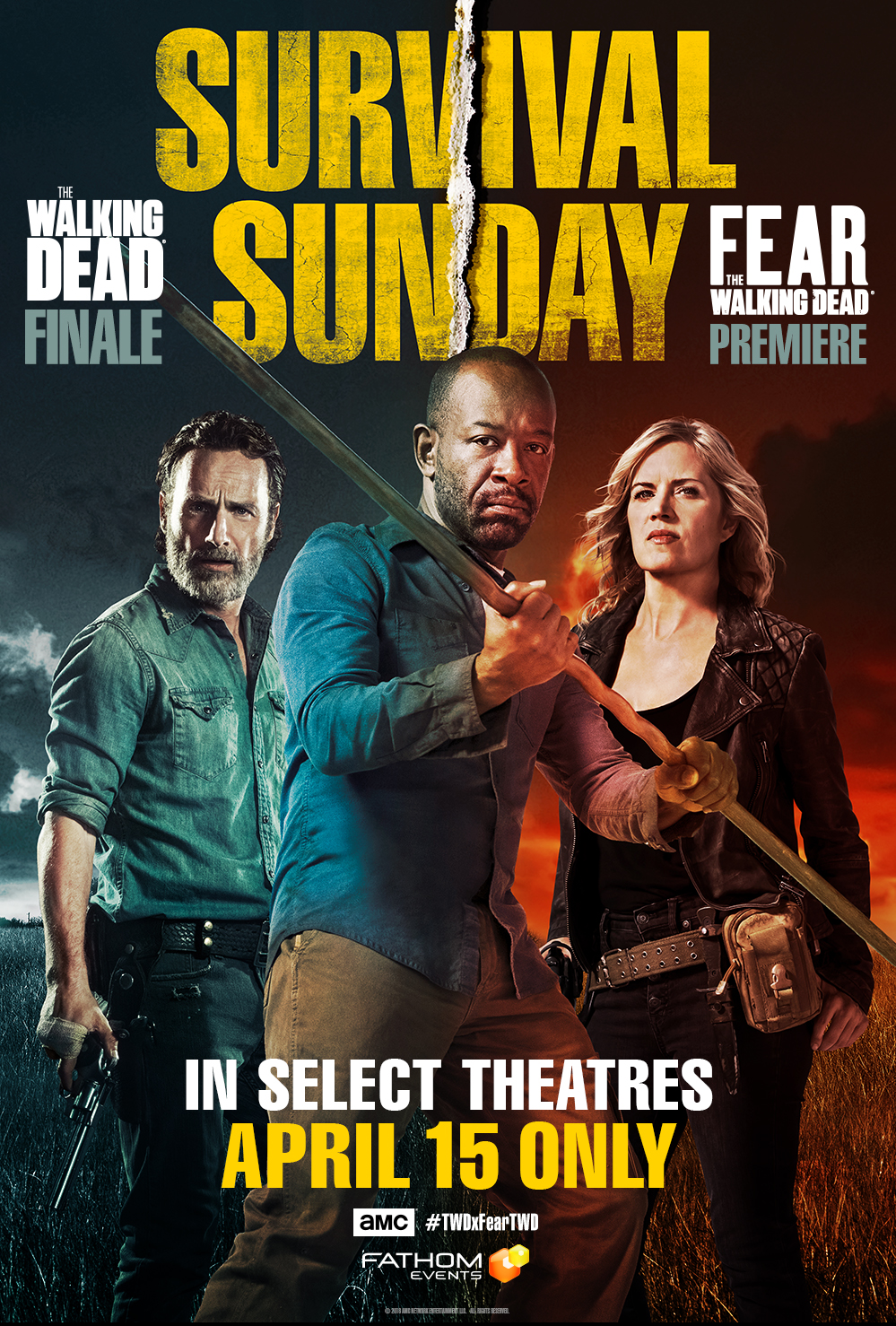 Hello, all you Walking Dead fans! Check out a special Fathom Event in April that is sure to get you excited. How many of you out there will be going to this? Let us know in the comments.

IN MORE THAN 750 MOVIE THEATERS NATIONWIDE

“Sunday, April 15 marks an epic and highly-anticipated moment for these series, as worlds collide when Morgan crosses over from ‘The Walking Dead’ and into the new world of ‘Fear,’” said Theresa Beyer, SVP of Brand Activation for AMC. “We are thrilled to be working with our terrific partners at Fathom to provide fans from across the country the opportunity to experience this crossover moment in such a special way and among other members of one of television’s most passionate fan communities.”

“‘The Walking Dead’ and ‘Fear the Walking Dead’ have captivated audiences and kept them on the edge of their seats for many years,” Fathom Events CEO Ray Nutt said. “Self-proclaimed ‘Dead-heads’ will have the unique opportunity to come together to experience these two compelling dramas larger-than-life and commercial-free on the big screen for just one night this April.”

Fathom Events is the leading event cinema distributor with participating theaters in all 100 of the top Designated Market Areas®, and ranks as one of the largest overall distributors of content to movie theaters. Owned by AMC Entertainment Inc. (NYSE: AMC), Cinemark Holdings, Inc. (NYSE: CNK) and Regal Entertainment Group (NYSE: RGC) (known collectively as AC JV, LLC), Fathom Events offers a variety of one-of-a-kind entertainment events in theaters such as live performances of the Metropolitan Opera, top stage productions including Newsies! The Broadway Musical and George Takei’s Allegiance, major sporting events such as Mayweather vs. McGregor, epic concerts with artists like Lady Antebellum and Sammy Hagar, the yearlong TCM Big Screen Classics series, inspirational events such as Is Genesis History? and IN OUR HANDS: The Battle for Jerusalem, and beloved anime titles like Princess Mononoke and Spirited Away. Fathom Events takes audiences behind the scenes for unique extras including audience Q&As, backstage footage and interviews with cast and crew, creating the ultimate VIP experience. Fathom Events’ live digital broadcast network (“DBN”) is the largest cinema broadcast network in North America, bringing live and pre-recorded events to 912 locations and 1,427 screens in 181 DMAs. For more information, visit www.fathomevents.com.

AMC is home to some of the most popular and acclaimed programs on television. AMC was the first basic cable network to ever win the Emmy® Award for Outstanding Drama Series with “Mad Men” in 2008, which then went on to win the coveted award four years in a row, before “Breaking Bad” won it in 2013 and 2014. The network’s series “The Walking Dead” is the highest-rated series in cable history and the number one show on television among adults 18-49 for the last five years. AMC’s other current original drama series include “Better Call Saul,” “Fear the Walking Dead,” “Into the Badlands,” “Humans,” “Preacher,” “The Son” and the forthcoming “Dietland,” “The Terror,” “Lodge 49,” and “McMafia.” AMC also explores authentic worlds and discussion with original shows like “Talking Dead,” “Talking With Chris Hardwick,” “Comic Book Men” and “Ride with Norman Reedus.” AMC is owned and operated by AMC Networks Inc. and its sister networks include IFC, SundanceTV, BBC America and WE tv. AMC is available across all platforms, including on-air, online, on demand and mobile.