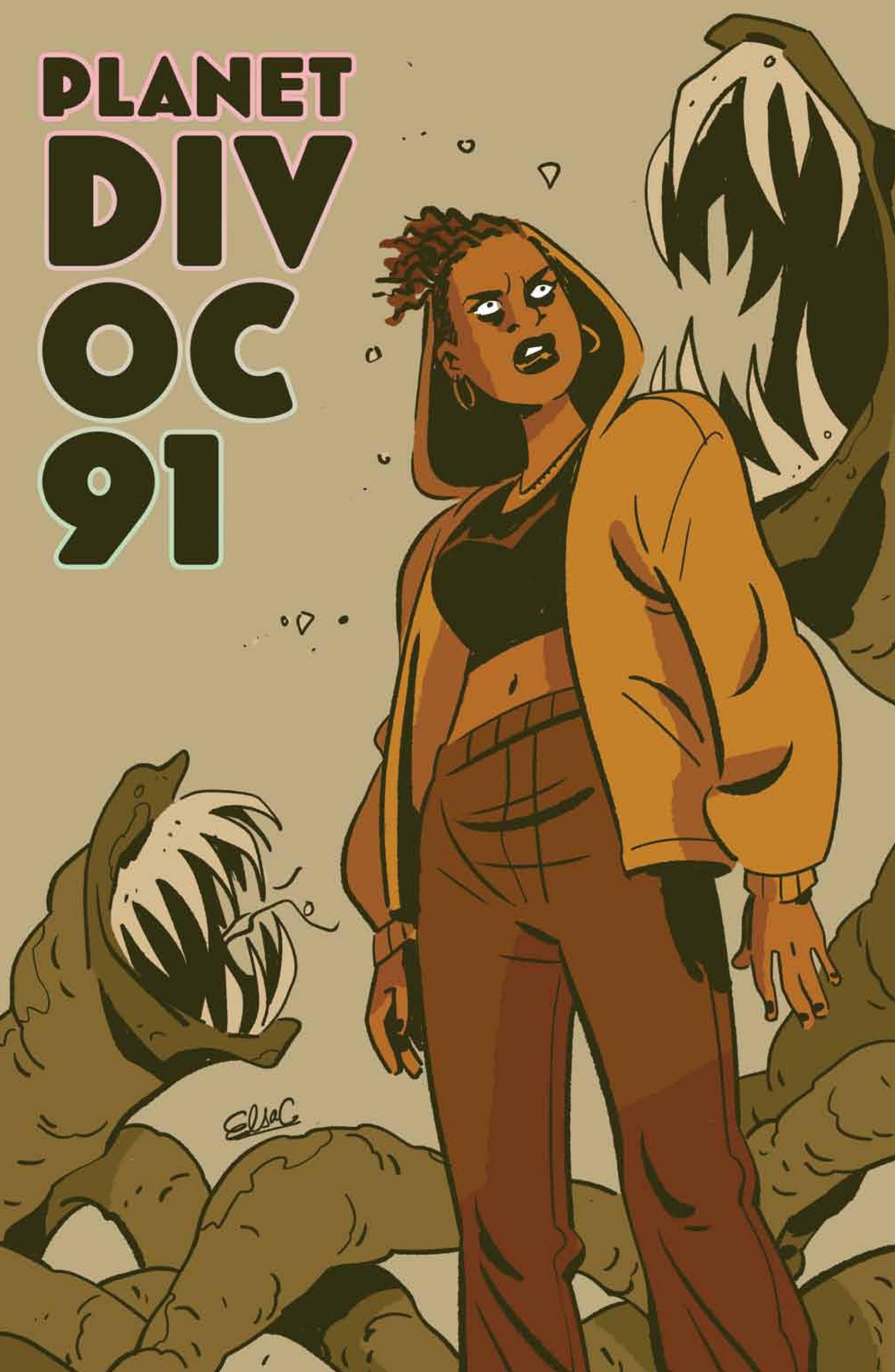 A new webcomic from renowned creators is debuting on Webtoon July 15 2020, read on for more info from the official PLANET DIVOC-91 press release:

And Mixes from Music Producers Including Grandmixxer, LCY, and Juice Aleem

(July 9, 2020)  This summer, an ambitious storytelling experience will bring the world of science to comics like never before. An impressive roster of comic book creators —including WALKING DEAD artist Charlie Adlard, FRIENDO writer Alex Paknadel, UK Comics Laureate Hannah Berry, colourist and designer James Devlin, and letterer Hassan Otsmane-Elhaou —are collaborating on PLANET DIVOC-91, an ambitious webcomic debuting July 15, 2020 on WEBTOON. The nine-part webcomic, which is funded by some of the most prestigious scientific organizations in the UK, is an offbeat sci-fi satire about a pandemic outbreak in the far reaches of outer space. In PLANET DIVOC-91, all young adults between the age of 16-25 have been transported to an earth-like planet which has been terraformed, so that both humans and aliens can breathe the air. Each chapter features the work of a different creative team and cover artist and is interspersed with short articles, links to videos, and other pieces of art by young adults about issues related to COVID-19, and mixes from world renowned DJs and Producers.

PLANET DIVOC-91 follows the adventures of two earthlings: Sanda Oung, a 23-year-old girl from the UK, and Champo Oung,Sanda’s 19-year-old, non-binary sibling. In the series, 15% of the world’s population of 7.5 billion people are now stuck on another planet, miles from the safety of home. Sanda learns that humans have been brought to Planet Divoc-91 because the Earth is at risk of an extinction level event – and young adults have been moved to safety by the Board of Adversity Scientists for Intergalactic Leadership’ (BASIL), led by a charismatic and fearsome alien named ADRO.

The series will feature covers from all-star artists Elsa Charretier (NOVEMBER), Marco Finnegan (LIZARD IN A ZOOT SUIT), Leslie Hung (SNOTGIRL), Warwick Johnson-Cadwell (MR. HIGGINS COMES HOME), VV Glass (DR WHO), (GRAFITY’S WALL), Matt Kindt (BANG!), Alitha Martinez (OMNI), Anand RK (GRAFITY’S WALL), and David Rubín (ETHER). The series’ first chapter is written by Sara Kenney and illustrated by legendary WALKING DEAD artist Charlie Adlard. “I’m thrilled to be working on such a project. It’s in times like these that we all need to pull together and help, and, in my own little way, this is something I can feel useful in doing,” said Adlard. The first chapter features a cover by acclaimed artist Elsa Charretier (NOVEMBER), 17 pages of comic storytelling and 17 pages of extra material. Subsequent chapters will feature between 6 and 8 pages of comic storytelling, in addition to the essays and reporting.

“Although the topics we’re discussing in the series are incredibly serious, PLANET DIVOC-91 is full of humour and is occasionally ridiculous,” said Kenney. “We’re aiming for more of a District 9 or The Good Place feel than, say, Star Trek.” Chapter 2 is written by Charlotte Bailey and illustrated by Nick Brokenshire. Chapter 3 is written and illustrated by UK Comics Laureate Hannah Berry, who also provides an afterword for PLANET DIVOC-91‘s first chapter. Creative teams for later chapters will be announced in the coming months, including contributions from Rachael Smith (HOUSE PARTY), Karrie Fransman (THE HOUSE THAT GROANED), Martin Simmonds (DEATH SENTENCE), Alex Paknadel (FRIENDO) and Zara Slattery (COMA COMIC).

PLANET DIVOC-91 is produced by Dr Bella Starling, Director of Vocal at Manchester University NHS Foundation Trust and Sara Kenney, Creative Director at Wowbagger Productions, in association with the UK Academy of Medical Sciences. “Bella and I were already working together on creative projects to engage audiences in sharing their views about antibiotic resistance and immunisation and when lockdown hit, it became obvious that our thinking could be refocused on the COVID pandemic,” said Kenney. “We realized there was a ton of information and advice about the pandemic out there, but it’s so difficult to know what to believe and who to trust, and there were virtually no young voices in the mix.” The project has since grown in scale and ambition, and there is a young editorial team from UK, India, South Africa, and Malawi who are interviewing experts from scientists to historians, ethicists to anthropologists, and from that material curating articles, creating art and videos in reaction to the interviews.

“Being teenagers and going through the most challenging stage of our lives is hard in itself — but now the impact of this new virus is resonating through our lives without any sense of when this will end,” writes Shanjida Hossain, one of the young adults contributing to the comic, in an interview with Sir Patrick Vallance, the UK Government’s Chief Scientific Advisor; “Having studied hard since the age of five, getting to the very end of our educational journey to face this global pandemic wasn’t something we could have ever planned for, yet here we are, left with nothing but insecurities and confusion.” Shanjida’s interview will accompany PLANET DIVOC-91’s debut chapter.

“Whenever our worlds are turned upside down and we find ourselves crying “what the hell”, we call upon stories to explain “this: this the hell,” Berry writes in the afterword to PLANET DIVOC-91 Chapter One. “Our brains are hardwired with a furious need to find patterns as a means of survival, and we hunt for them – and for their subsequent meanings – everywhere, in everything. Stories bring shape and meaning to random events. They are about the conflict and the resolution; the breaking apart and the coming together; they help us to find hope in darkness and rally us when we are lost and, ultimately, they help us overcome. Faced with the greatest upheaval of a generation, and the strict social obligations keeping us all apart, where better to seek that sense of connection and meaning now than in stories?”

“PLANET DIVOC-91 isa thought experiment, one that’s a metaphor for what we’re currently experiencing around the world with COVID-19,” said Kenney. “We’re releasing the series on WEBTOONS, because it’s an inclusive, wide-reaching, digital platform, with a global audience of 10 million readers daily, and we want to foster a dialogue in the comments section, about the pandemic and where we go from here. We’ve also got some exclusive mixes hidden as Easter Eggs in the comic starting with one of the best UK Grime DJs, and a uniquely talented and much loved producer in his own right Grandmixxer. Chapter 2 features a mix from one of the most important new-generation experimental UK club music producer, artist and label owner LCY. Chapter 3 features an Afrofuturism playlist from one of the UKs best loved MCs Juice Aleem. And at the end of the day, we want readers to come back each month for the story and art. Why is Planet Divoc-91 inhabited only by 16-25 year old humans? Who are these strange aliens? Sanda Oung, a bit of a conspiracy theorist at first, has to figure out what is real and who to trust.”

The project was kick started via NIHR Manchester Biomedical Research Centre seed funding who are providing continued support. Additional supporters include The Science and Technology Facilities Council (STFC); Royal Society of Chemistry (RSC); The University of Manchester through the Wellcome Institutional Strategic Support Fund award; Sarah Iqbal,  DBT/Wellcome Trust India Alliance; Anita Shervington, Blast Fest and Nabeel Petersen, Interfer (South Africa). The series was inspired by the COVID-19 pandemic. “Our aim is to empower audiences to make sense of a pandemic situation, to create a forum for their ideas, and to use participatory arts to inform science research and influence science policy,” said Kenney.

“We’re creating a crazy, exquisite corpse with writers and artists taking on the same characters that will be accessible, entertaining and informative,” said Starling. “The wider project will capture young people’s thinking and ideas about pandemics and related research, to feed into scientific research and policy, as well as helping and challenging our research communities to think about the best ways of actively involving young adults in ongoing and future research”