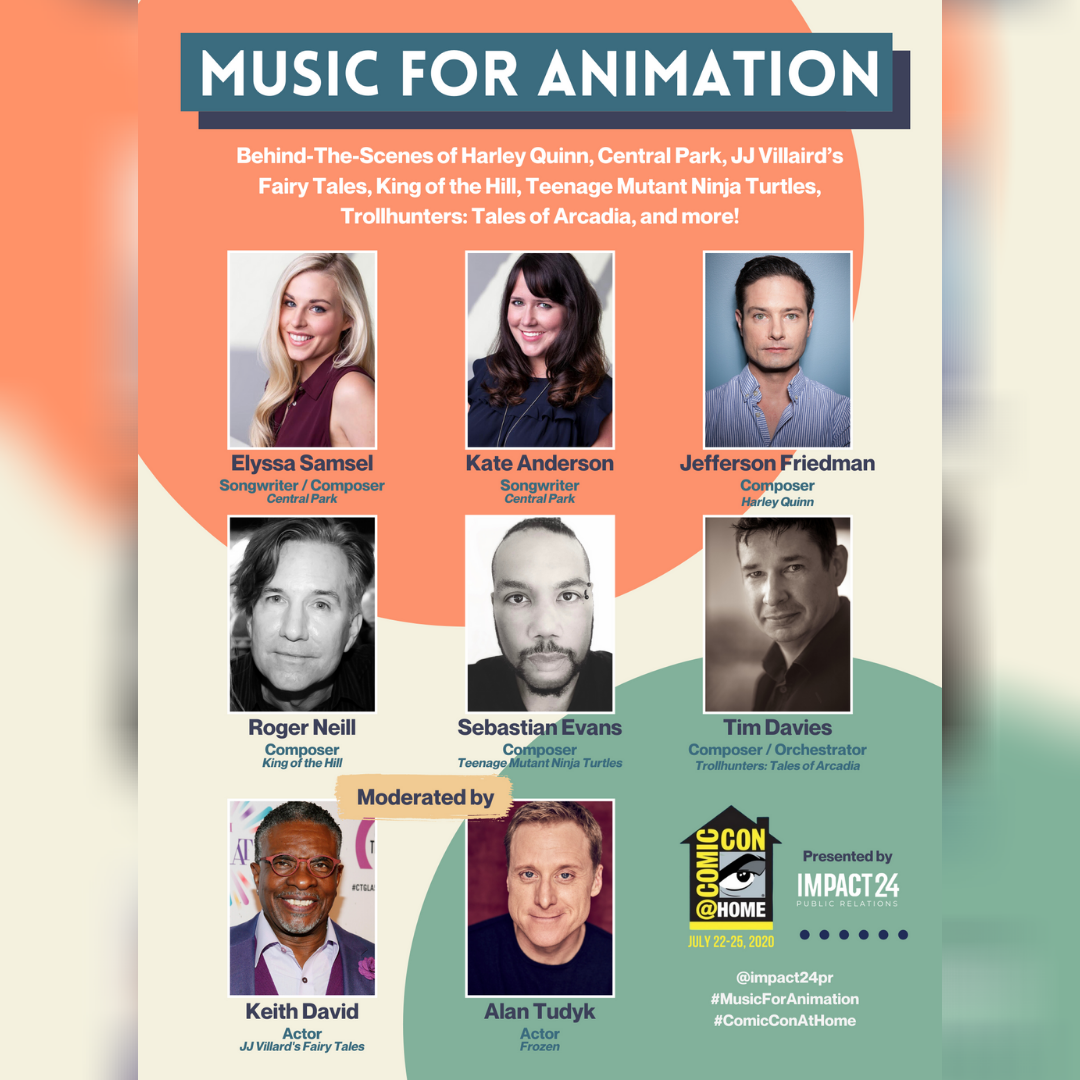 In perusing the offerings of the first-ever San Diego “Comic-Con At Home,” one-panel title that popped out to me was “Music for Animation,” which combines two of my favorite things in life. What really caught my eye, though, was seeing collaborators Kate Anderson and Elyssa Samsel listed as panelists. The two currently write songs and music for the musical animated series “Central Park” on Apple+, and also wrote the music and songs for “Olaf’s Frozen Adventure” (2017).

Prior to the release of the panel on Comic-Con International’s YouTube channel (you can find it here at https://youtu.be/4KwaNROG6sA), the two women participated in a virtual press roundtable to discuss their friendship and their work together as songwriters and composers. Apart from the two projects mentioned above, the duo contributed to one episode of the older animated series, “Little Bill”; Samsel is also credited with the “choir lyrics” in the 2019 film, Jojo Rabbit.

Anderson and Samsel became friends when they were thrown together randomly at the BMI Lehman Engel Musical Theater Workshop nearly ten years ago. Anderson, who has studied at Gettysburg College and has improv training from Upright Citizen’s Brigade, and Samsel, who has classical training in violin and piano and attended the American Musical and Dramatic Academy, were grouped together on an assignment. (As Kate notes in the panel linked above, it was “love at first write.”)

Anderson counts among her biggest influences “Frozen” collaborators Robert Lopez and Kristen Anderson-Lopez, as well as Stephen Sondheim. She also mentioned Tina Fey and Amy Poehler, “smart, comedic women like that who have created such a wonderful, safe world for females to be crass or just to break out of the mold of what we’re expected to be.”

Samsel also has similar influences, and adds film scores to her list. She likes how a film score makes a silent scene “heart-wrenching,” Composers who inspire her include Howard Shore and Michael Giacchino.

Apart from fitting together well as a musical theater collaborators with similar influences, the fact that they are two women in a male-dominated industry was not lost on them. The Nerd Element asked them what it’s like for them being women songwriters in the musical theater world.

Samsel said, “There are female composers that have broken that glass ceiling and created a path for us to follow. I’ll never forget being about 20 years old and I noticed a musical theater song called ‘Taylor the Latte Boy’ that had been written by Marcy Heisler and Zina Goldrich. And when I looked up at the top of the page to see who had written it, I was shocked because I’ve never seen two female names on a sheet of piece of sheet music, even with all the years of classical training and all the music that I’ve learned from the age of six.

“Seeing that inspired me to then pair up with Kate and become more names on the top of sheet music so that other girls can see that and realize, ‘I can do this too’” she said.

Anderson added, “I think being two women in this industry [has] had its challenges, but we feel so grateful that right now, and over the last 10 years or so, there’s just been a lot of real need for women to come in and tell these stories, and to write material that is really authentic to the female experience.”

The Nerd Element also asked the two to share their songwriting/composing process. Anderson said that their process is “different for various projects. It’s also varied a lot through the years as we’ve figured out how to work together.

“When we have an idea for a song,” she continued, “we’ll start out by talking about the lyrical hook and the musical hook and landing on that first lyrical hook.” Landing that first part of the song drives them “from point A to point C” she noted. They also tend to write the music first, then go back and forth with each other until the song is fully fleshed out and “ready to go out on demo,” she said.

Samsel later said in a discussion of their process on “Central Park” that after they settle on the melody, she will “base the rest of the song around it.”

“Most of the time for me when I’m coming up with music at the piano, the melody and the accompaniment are linked,” Samsel continued, “which is a great metaphor for how Kate and I work, music and lyrics because there couldn’t be one without the other.”

As mentioned earlier, one of the duo’s biggest gigs to date has been the Disney animated special, “Olaf’s Frozen Adventure,” where they met actor Josh Gad (who voices Olaf). Getting the gig “was obviously a dream come true,” Anderson began. “It was daunting, but yet we have this incredible playground to play on that had already been set out for us by Kristen Anderson-Lopez and Robert Lopez. We also had a little bit of their guidance as we started out in the earlier phases of writing the music. And that was really helpful to make sure we were sort of nailing it and getting the tone right.”

Samsel added that because of the focus on Olaf, the two “went into it with such an optimistic view of writing the music for such an optimistic character.” Samsel also stated that writing for Olaf was fun and shared a funny anecdote about meeting Gad for the first time.  According to Samsel, the first thing Gad said to them was, “Why is this song so high?”

“He gave us such a hard time about writing the part in such a high register,” she said, noting that the actor was joking with them (Olaf sings in a high voice). “That sort of humor between us and Josh led to the friendship that ended up growing out of that experience.”

The new friendship also led to their current job on “Central Park,” the latest show from Loren Bouchard (“Bob’s Burgers”), Nora Smith, and Gad. During the “Music for Animation” panel, Anderson noted that “Josh reached out on Instagram and was like ‘Hey, can I talk to you guys about something?’ We were immediately super intrigued. He said they were creating this animated series and asked if we would be interested. We never thought someone would call and say, ‘Hey, do you want your dream job?’”

For the first season of the show, Samsel said they normally have about two weeks to complete a demo. “You really have to work fast and rewrite fast,” she said, which includes “as many rewrites as needed until it’s approved by that end of the two weeks.”

“Our goal is usually to get a demo in as quickly as possible so that we can start getting the feedback,” Anderson said. “Sometimes we’re juggling a couple songs at once and might be more than one,” she stated, continuing that “it got a lot easier as the season went on because we worked really hard […] to establish a musical character for each [animated] character.”

As happened during many panels, the topic of the coronavirus pandemic was unavoidable. Fortunately for Anderson and Samsel, they continue to work on season two of “Central Park” thanks to technology such as Zoom.

“We feel very fortunate that animation is offering us the ability to continue writing songs that are hopefully putting out some positive energy into the world in this dark time,” Samsel stated, adding “anything theater related is obviously on hold. We had a couple projects that were slated to go to New York and be off Broadway, but that’s on hold.” Working via Zoom or email isn’t new for them, though, so they’ve been able to adapt easi.

The pair were later asked about their work partnership crossing over into their friendship. Samsel said that they are best friends, and that being able to “also be business partners and get to work with your best friend is a joy that I wish everyone had.”

“We have a philosophy we live by, too,” Anderson said, “which is to always treat whoever you work with like they’re a genius. We certainly have that respect and think that of each other. And it has helped our collaboration come super far because we just have such an inherent trust in one another.”

As far as women making their own space in the male-dominated industry of musicals, the duo’s work on “Central Park,” Samsel says, adds to them getting “to feel like pioneers creating a musical for TV animation.”

Samsel said that “one thing that continues to make me so happy that we did get to influence in terms of the music of the entire series was that when they came up with the original concepts, all they knew is that they wanted Birdie, Josh’s character, to be a busker. And I asked if he could play violin because I used to be a busker in Central Park with my violin. And they said yes.”

As far as future projects, Anderson indulged in a little wishful thinking, saying they’d like to write “Bridesmaids: The Musical.” Samsel stated that they actually have a Christmas song collaboration with Michael Giacchino coming out in the future.

In the meantime, the duo will continue making strides for women songwriters and composers in musical theater and similar environs. When a question about diversity came up in the “Music for Animation” panel, for instance, Anderson said that one way to expand diversity is “taking a chance on someone with a more diverse voice and a more diverse background.

“In doing that,” she said, “you’re creating an example for a younger artist to see themselves and believe that they, too, can have their voice represented in that way someday.”