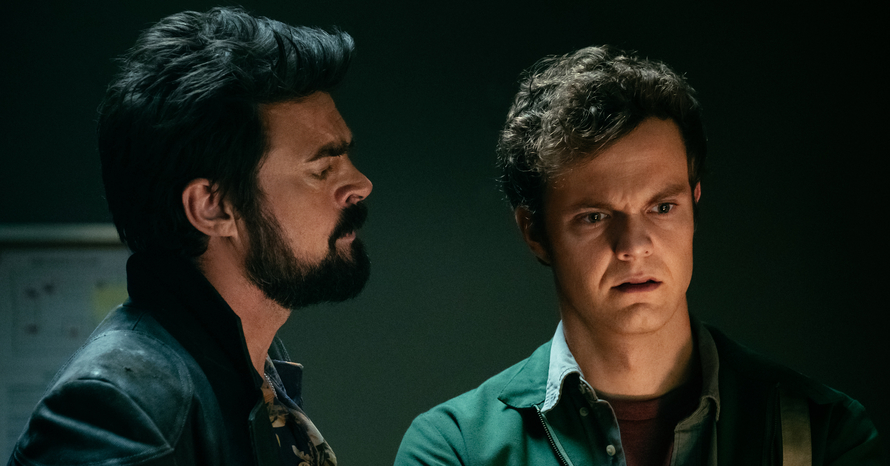 Jack Quaid and Erin Moriarty had both been working steadily prior to landing their roles as Hughie Campbell and Annie January/Starlight, respectively, on Amazon Prime Video’s “The Boys.” Most recently, Quaid voiced several characters, including Richie Rich, on the animated show, “Harvey Girls Forever!” and is now also voicing Ensign Boimler on the new animated series, “Star Trek: Lower Decks.”

Among Moriarty’s stand-out roles were Audrey Hart, daughter of Woody Harrelson’s Marty, on season one of “True Detective” (2014), and Hope Shlottman on a season of “Jessica Jones” (2015).  Before starring opposite each other on “The Boys,” in fact, she and Quaid also appeared together in a video short in 2018, “Creedence Clearwater Revival: Have You Ever Seen the Rain.”

The two were paired together to discuss their roles on “The Boys” in a recent Zoom roundtable interview. When we last them in character, Annie and Hughie were estranged. Though Hughie had real feelings for Annie, especially after their “meet cute” on the park bench in the first episode when he didn’t know she was Starlight, he’d betrayed her trust too much for her to forgive him. Moriarty and Quaid, however, have an easy camaraderie.

The Nerd Element asked them if Annie and Hughie could ever regain their trust in one another during the upcoming second season.

Quaid, who said Hughie “one-thousand percent trusts Annie [because] he was the one that messed up,” deferred to Moriarty for her answer.

“That’s kind of the big question, honestly, between them,” Moriarty said. “The reality is that’s the question that needs to be answered as the episodes roll out. There’s no way of answering it without giving away spoilers, but I will say that a lot of Annie’s trajectory this season is trying to—she’s compensating for what happened to her last season.”

Moriarty said that Annie “feels kind of stupid for the extent of how much she trusted people, which I’m not saying is necessarily correct. But I think we often go through that when we’ve been heartbroken by the people we love the most when we find out they’ve lied to us.”

“So now she’s got this thick wall up,” Moriarty continued, “and I think she is overcompensating for the violation of trust against her. I think as the season progresses, she’s able to slowly thin that wall.” Moriarty said that Hughie will still be a good guy, which Annie is “less able to deny that as the season goes on.” But she didn’t want to be definitive to avoid spoiling the two’s upcoming journey.

While Hughie is a good person, he’s also someone the audience has already seen slowly unraveling, first with the death of his girlfriend, Robin (Jess Salgueiro), when A-Train (Jessie T. Usher) literally runs through her, and then when he slowly has to compromise some of his morality thanks to the situations Billy Butcher (Karl Urban), the leader of the Boys, puts him in.

Quaid was asked about Hughie’s mental state, given all that’s happened to him and what was shown in the trailer for the new season (i.e., stuck in a boat that plows through a whale).

“Will he survive with his sanity intact?” Quaid responded, laughing. “That’s the ever-lingering question. I think [showrunner] Eric Kripke is basically just trolling me at this point. He will do anything to traumatize this poor kid.”

Quaid pointed out that Hughie starts the new season “in a low place. He has less than he did at the beginning of season one—all of his friends are thinking about leaving him and abandoning the cause.” Even the return of Butcher, who’s been his mentor, doesn’t make Hughie feel all that much better.

Hughie “sees through the veil that” Butcher projects, Quaid said, and knows that he cannot trust the man. He noted that Hughie has a long road ahead of him to recover from everything he’s already been through.

Moriarty was asked if Starlight will continue her attempts to take down Vought International, the company that created The Seven, the team of superheroes she joined, and if Starlight would be willing to do so openly. Moriarty pointed out that Starlight already called out what The Deep (Chace Crawford) did to her, and it wound up burnishing her image.

However, Starlight has a new “supe” to contend with, Aya Cash’s Stormfront. “We see that [Stormfront’s] got this rebellious nature about herself that’s kind of anti-Vought, but they still hire her and they like it because it’s this fresh new energy,” Moriarty said, adding “so I will say that publicly coming out—making a speech or a public display of going against Vought—I don’t think is going to be Starlight’s method of trying to take them down. I think it’s going to need to be more covert.”

Moriarty was also asked what Starlight’s relationship with Stormfront would be like, especially given Stormfront’s devil-may-care attitude versus Starlight’s more conservative nature.

“I think the apparently cool thing about Stormfront is we meet her and she’s the first person who, upon meeting Homelander (Antony Starr), [is] not impressed at all. Being introduced to anything that’s Vought-related, she ain’t impressed,” she said.

Moriarty revealed that Stormfront calls Starlight “a Vought Barbie. You get the impression that she thinks [all of The Seven are] Vought puppets, so Starlight actually respects that.”

Starlight, however, knows she has to keep her own actions against Vought secret, and she’s not about to drop her guard, even if she finds Stormfront’s attitude refreshing.

“I would say the beginning dynamic is one in which Starlight is trying to pursue an allyship and Stormfront doesn’t reciprocate that, but both of them have a facade and both of those facades are kind of ripped away to each other as the season progresses.” Moriarty could not reveal more without giving out spoilers, but she did say for both women, “looks can be very deceiving, and neither of them are what they expect each other to be.”

Both actors were also asked how they approach their characters, as while Annie/Starlight and Hughie are decent people, they are forced by circumstance far out of their comfort—and moral—zones. For Hughie, that means dealing with tragedy and committing acts of mayhem that aren’t in his nature the way they seem to be for the rest of the Boys.

Quaid said that Hughie’s “a guy that tries to be nice to literally everyone around him, and everyone around him just either doesn’t want him there or thinks he’s inept. But in this season, I think Hughie tries to come into his own a lot more.” Quaid said that Hughie’s journey includes not only figuring out his own desires, but also finding “his own way of going about taking down Vought. I think he becomes a lot more capable this season.”

One of the hallmarks of “The Boys” is a lot of pop culture references and real-world satire, as well as satire of the whole superhero mystique. Moriarty and Quaid were asked about those elements of the show and how it relates to their characters. For instance, in season one, Starlight was forced to wear a skimpier outfit as part of being in The Seven, as well as forced into other situations where she was objectified.

Moriarty said that she leans into the satire. “I think when anyone is young, they kind of try on different hats,” she said. “They’re trying to figure out who they are.”

“And so maybe yes, I had moments that felt a little artificial to myself when it came to the ways I was participating in the entertainment industry, and certain things on the social media or publicity front. But I would say I’m lucky because I haven’t had a job yet that’s made me feel like I’ve had to really sacrifice myself like [Starlight] does,” she continued. “So I really lean into that satirical nature and that sort of double life that to me is more imaginary and more of an ‘as if’ than an actual personal experience.”

Hughie doesn’t have to contend with objectification; instead, he is, as Quaid says, “a total nerd” who drops pop culture references left and right because of his nerdiness.

“I wanted to have the sense that he had this whole life before the show started,” Quaid said. For example, Hughie was “into superheroes before he realized just how devious they were.” Another thing Hughie is into? Billy Joel.

“We do get a little bit more context about his fascination with Billy Joel this season,” Quaid revealed, then shared a quick backstory about it.

“I find this is just a testament to Eric Kripke and how amazing he is,” he said, then referred to an early scene in the first season where Butcher wants Hughie to bug in the Seven’s tower. Quaid said that he was told he could improvise, which he did. “I had this whole thing about James Taylor. And then Eric said [to] make the list James Taylor, Simon and Garfunkel, [and] Billy Joel.”

“Something about Billy Joel just stuck to the point where it was Hughie’s whole character. The last thing he says to Robin before she dies is, ‘Don’t you ever besmirch Billy Joel,’ and that’s because of that little bit that we did the day previous.”

“And now I’m seeing ‘We Didn’t Start The Fire’ in the season two teaser trailer,” he remarked.

Speaking of that teaser trailer and the whale of a time the Boys have, Quaid had been asked what it was like to film that scene. As one might imagine on a show that can be as gory as “The Boys” is, it was “insane,” he said.

Quaid used a gaming analogy to describe it. “I got to like level 10 of having blood on me” in the first season, he said, but “that was the tutorial level of blood; prepare for the boss fight.”

Quaid gave as an example the scene where he blew up Transclucent (Alex Hassell) in season one; he could easily clean himself up because it was “that take and that was it. This season,” he noted, “specifically for the whale episode, I started my day in the hair and makeup trailer, having blood meticulously applied [because it] needs to match the previous day’s blood. So I spent weeks in it this time around and that was new. It was very sticky, but Head & Shoulders shampoo really helped get it out.”

As for the recently announced third season pick-up, Quaid said he “can only imagine what Eric has in store for me.”

“I don’t know. I think we should just have a blood shower on set at this point,” he said. “Like, just come in and be like [Quaid makes shower spraying noises and gestures] and then get to work.”

Amazon Prime Video’s hit series, “The Boys,” returns September 4, 2020, for a second season of mayhem, fun, and trust issues covered in blood, with three episodes being available at once, followed by one-per-week for the rest of the season