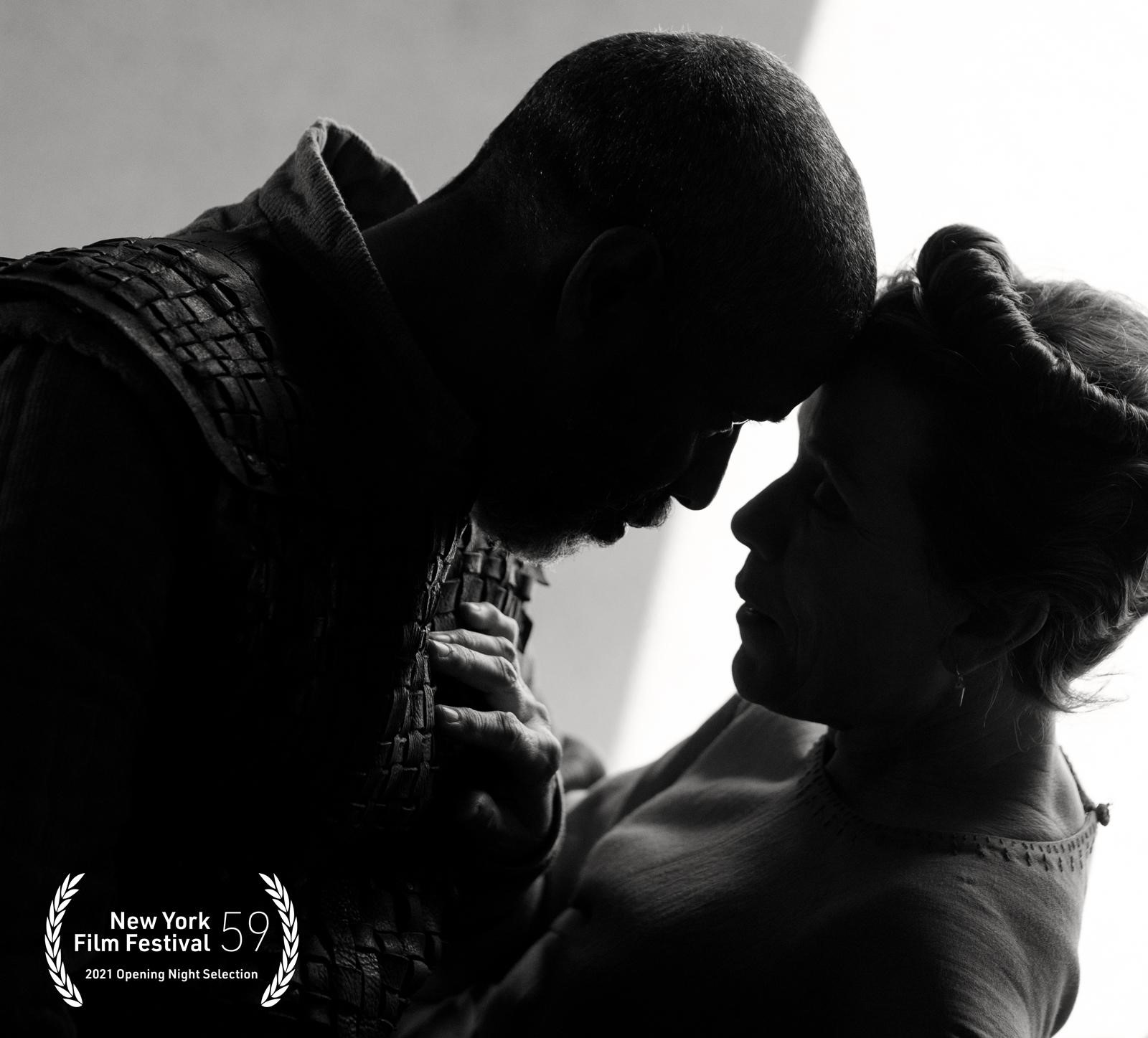 A work of stark chiaroscuro and incantatory rage, Joel Coen’s boldly inventive visualization of The Scottish Play is an anguished film that stares, mouth agape, at a sorrowful world undone by blind greed and thoughtless ambition. In meticulously world-weary performances, a strikingly inward Denzel Washington is the man who would be king, and an effortlessly Machiavellian Frances McDormand is his Lady, a couple driven to political assassination—and deranged by guilt—after the cunning prognostications of a trio of “weird sisters” (a virtuoso physical inhabitation by Kathryn Hunter). Though it echoes the forbidding visual designs—and aspect ratios—of Laurence Olivier’s classic 1940s Shakespeare adaptations, as well as the bloody medieval madness of Kurosawa’s Throne of Blood, Coen’s tale of sound and fury is entirely his own—and undoubtedly one for our moment, a frightening depiction of amoral political power-grabbing that, like its hero, ruthlessly barrels ahead into the inferno. An Apple/A24 release.

“The New York Film Festival is a place where I’ve been watching movies as an audience member and showing them as a filmmaker for almost 50 years,” said director Joel Coen. “It’s a real privilege and a thrill to be opening the Festival this year with The Tragedy of. . .”

“We can’t wait to welcome New York Film Festival audiences back to Lincoln Center this fall, and what a way to do that!” said Eugene Hernandez, Director of the New York Film Festival. “With Joel Coen, Frances McDormand, Denzel Washington, and our friends at Apple and A24 on Opening Night at Alice Tully Hall, we’re setting the stage for a momentous return to our roots. Last year was a deeply meaningful edition of NYFF; our Festival traveled to Brooklyn, Queens, the Bronx, and around the country via our Virtual Cinema. This year we’re back in our Upper West Side home, but you’ll also find us exploring new venues and ways to connect with moviegoers in person, outdoors, and online—stay tuned!”

“We’re proud to open the festival with a film that immediately joins the ranks of the great screen Shakespeares,” said Dennis Lim, Director of Programming for the New York Film Festival. “Working with brilliant collaborators, including Denzel Washington and Frances McDormand in stunning form, Joel Coen has made an inspired and urgent interpretation of an eternally relevant classic, a moral thriller that speaks directly to our time.”

Campari is the exclusive spirits partner for the 59th New York Film Festival and the presenting partner of Opening Night, extending its long-standing commitment to the world of film and art.

Presented by Film at Lincoln Center, the New York Film Festival highlights the best in world cinema and takes place September 24 – October 10, 2021. An annual bellwether of the state of cinema that has shaped film culture since 1963, the festival continues an enduring tradition of introducing audiences to bold and remarkable works from celebrated filmmakers as well as fresh new talent.

NYFF59 will feature a combination of in-person, outdoor, and virtual screenings, with a comprehensive series of health and safety policies in coordination with state and city medical experts. Visit filmlinc.org for more information.

Festival Passes are now on sale, with Early Bird pricing through Friday, July 30 only. NYFF59 tickets will go on sale to the general public on Tuesday, September 7 at noon ET, with early-access opportunities for FLC members and pass holders prior to this date. Save 15% on Contributor, Friend, Angel, and New Wave membership levels when you join online by August 9 using the promo code LOVEFILM. Learn more here. Support of the New York Film Festival benefits Film at Lincoln Center in its nonprofit mission to promote the art and craft of cinema. NYFF59 press and industry accreditation is now open.

Film at Lincoln Center is dedicated to supporting the art and elevating the craft of cinema and enriching film culture.

Film at Lincoln Center fulfills its mission through the programming of festivals, series, retrospectives, and new releases; the publication of Film Comment; and the presentation of podcasts, talks, special events, and artist initiatives. Since its founding in 1969, this nonprofit organization has brought the celebration of American and international film to the world-renowned Lincoln Center arts complex, making the discussion and appreciation of cinema accessible to a broad audience and ensuring that it remains an essential art form for years to come.