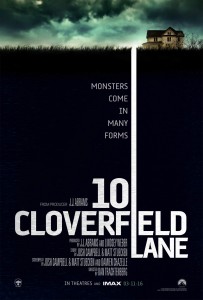 10 Cloverfield Lane, the second entry in what appears to be a planned “Cloververse,” is not a sequel to 2008’s found-footage monster movie, Cloverfield, but it shares some commonalities—apart from being produced by J. J. Abrams, that is. There are company names and products (Bold Futura, Slusho!) that appear in the background of both movies, and a long time is taken until we’re shown just what is going on outside the main characters’ points of view. Fans of the Cloververse will be pleased with these little touches.

Fans of taut psychological thrillers will be even more pleased with 10 Cloverfield Lane as a whole; the film eschews the found-footage style for more stable camera shots, and who or what the monsters are is well-hidden until it’s time for maximum shock. Honestly, as a fan of horror and thrillers and especially psychological thrillers, I was very satisfied with it (despite a huge tonal shift at the end that I’ll address later in this review).

The film begins with a woman, Michelle (Mary Elizabeth Winstead), apparently leaving her husband in a hurry. Michelle drops her apartment keys and wedding ring on a dresser and flees with few belongings. As she’s driving later that night, she’s hit seemingly out of nowhere by another car in a sequence that’s as disorienting and jarring to the audience as it is to the character.

Michelle awakens, bloodied and injured and shackled to the wall of a mostly barren concrete room via a brace on her knee. As she struggles to make sense of her surroundings and how she can escape, ominous sounds coming from beyond the heavy metal door to her room alarm her. Enter the slowly moving Howard (brilliantly played by John Goodman), who leaves her some food, crutches, and a pick that opens her handcuffs. Is he her captor, or, as he says, the man who found her after her car wreck and saved her life, not only because he gave her basic medical care, but because the world outside has been attacked by an unseen force and the only safe place is inside the underground bunker she’s currently in?

Also in the bunker: local man Emmet (John Gallagher Jr.), who appears to have a broken arm, not because he was captured or saved by Howard, but because he wound up getting injured once he deliberately got inside the bunker. Could he be a bad guy, or someone Michelle could work with to get topside and see what’s going on for herself? For a long time, we really don’t know.

Director Dan Trachtenberg, known mostly for commercials and a couple of short films before his directorial debut here, makes excellent use of close-ups to further ratchet up the tension—there were a few spots where I watched from between my fingers because I was certain something nasty was just out of frame—and also add to the sense of claustrophobia of being trapped underground, no matter how “homey” Howard has made his nuclear fall-out shelter.

The screenplay, by Josh Campbell & Matthew Stuecken, as well as Damien Chazelle (writer of 2014’s Whiplash), does a great job of keeping the audience guessing as to Howard’s and Emmet’s true natures, and is told almost entirely from Michelle’s point of view—we only learn what’s going on as she does, which further increases the tension of the drama unfolding before us. Michelle’s grappling with her new reality is particularly effective, as Winstead brings both vulnerability and resourcefulness to the role. She grounds the character well, keeping the audience invested in her fate, even though we barely know anything about her before she winds up with Howard.

As the three people, trapped in close quarters, none of whom know for sure who attacked the United States or why (and in Michelle’s case, if there even was an attack), navigate their new circumstance and each other’s personalities, the story twists and turns, consistently upending expectations about what’s going on inside the bunker and out. It’s especially gratifying that none of the twists feel forced, but occur naturally in the course of the film based on what the characters are doing at any given time.

While both Winstead and Gallagher Jr. are very good in their roles, what really sets this picture apart is the outstanding work by Goodman. His Howard is alternately menacing, funny, sympathetic, and outright terrifying, in many cases because of Goodman’s subtle shifts of expression and tone of voice. It’s truly, as a friend said, an Academy Award-winning performance (which will unfortunately and most likely be ignored because the film’s been released too early in the year and also because of a seeming prejudice against horror films, The Silence of the Lambs notwithstanding).

For the majority of its runtime, 10 Cloverfield Lane is tense, funny, and scary, until it takes a major left turn and becomes something else entirely. It’s not that the ending doesn’t work, either, but that it goes on a bit too long as to almost become comical. Even with that caveat, I highly recommend 10 Cloverfield Lane as the picture to see this Easter—and beyond.

Everyone Is A A Pretty Little Liars Podcast Episode 40: Sugar Daddy Lucas

Death In The Desert: Josh Evans’ Take on The Ted Binion Story