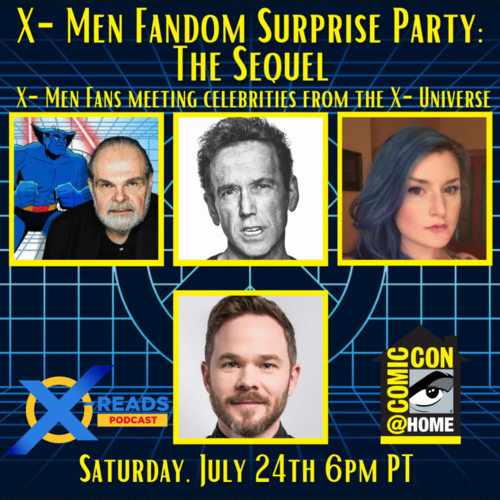 They were told it was just a fandom panel, but what these unsuspecting X-Men mega fans didn’t know was that secret celebrities were waiting on Zoom to drop in and surprise them with a special appearance.  Tune in as celebrities Shawn Ashmore (X-Men, X2), Leah Williams (writer, X-Factor), Bill Sienkiewicz (artist, The New Mutants), and George Buza (Beast, X-Men: The Animated Series) surprise the panelists Samantha Rei, Morgana Ignis, Rex Ogle, Michelle Waffle, Justin Otero, and Dylan Carter.

“We are so happy to bring this panel back to Comic-Con once again.  It brings Chandler and I a lot of joy to use this platform to connect fans with creators and build these unique experiences that bring them together,” says Chris Riley, co-host of X-Reads Podcast.

Watch the virtual event now as X-Reads Podcast presents the X-Men Fandom Surprise Party – The Sequel for Comic-Con at Home 2021.

WHAT: The X-Men Fandom Surprise Party – The Sequel presented by X-Reads Podcast

Chandler Poling & Chris Riley have been friends for well over a decade and share a fondness for the X-Men, but also have things to say about them. Together they read through past issues of Uncanny X-Men, The New Mutants, X-Men, and more, recapping the storyline so listeners can follow along, while interjecting comments and opinions on the outfits, the questionable dialog, the often-odd advertising moments, often accompanied by celebrity guests. That is what X-Reads is all about. A strong read. The library is open.

Starz brings the stars to Comic-Con 2016