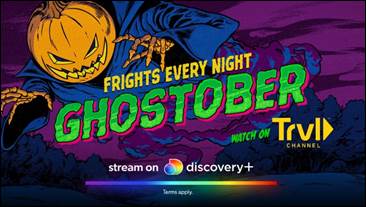 Plus, GHOST BROTHERS: LIGHTS OUT Is Back With a Brand-New Season, and Jack Osbourne Revisits U.K. Haunts From His Childhood in JACK OSBOURNE’S HAUNTED HOMECOMING

Zak Bagans, Aaron Goodwin, Jay Wasley and Billy Tolley are in Downey, California, to investigate the shuttered Los Padrinos Juvenile Detention Center, given the ominous designation of the “Devil’s Den” by both guards and inmates. In the terrifying, two-hour special, GHOST ADVENTURES: DEVIL’S DEN, the crew go behind the barbed wire to find out if the evil inside is not the real-life horrors of detention, but the devil itself. [Two-hour special]

SHOCK DOCS – THE CURSE OF ROBERT THE DOLL

Considered the world’s most haunted doll, Robert the Doll draws thousands of visitors to a museum in Key West, Florida, every year, and those who fail to follow his rules find themselves cursed. Victims have experienced illness, injury, accidents and even death. But what makes Robert curse his victims? What evil entity lives inside this doll? This latest Shock Docs installment explores the true origin of Robert the Doll, uncovers the mystery of Robert’s first owners in 1905, and seeks to find out why this doll is so nefarious. [Two-hour special]

Few things are more profound than the quiet bond between a person and their pet. But what if an evil presence takes hold of the animal and uses the trusted companion to get to us? ELI ROTH PRESENTS: MY POSSESSED PET explores the true, terrifying tales of what happens when evil spirits, curses and demons take over family pets. Each episode will follow the chilling and deeply personal story of someone who has had their profound and loving relationship ripped apart by supernatural forces beyond their control. [Hour-long episodes]

A teenage girl’s black stallion, Cash, is like a noble beast out of a fairy tale. But when she accidentally awakens an ancient evil, her dream horse turns into a nightmare.

“Master of the House” – Premieres Friday, October 7 at 10 p.m. ET/PT on Travel Channel and Streaming on discovery+

A bachelor adopts a dog, Sam, to keep him company in his new home. But when an evil spirit takes hold of his beloved pet, the roles are reversed, and Sam eventually becomes the master of the house – and of him.

The renowned TAPS team are back with a new season of the paranormal show that started it all. Original GHOST HUNTERS members Jason Hawes, Steve Gonsalves and Dave Tango, along with Shari DeBenedetti, revisit their most chilling cases and investigate disturbing new hauntings inside mansions, businesses, historic sites and more. Armed with state-of-the-art technology, their proven methodology and a few special guest investigators, TAPS tackle disturbing paranormal activity head-on, leaving no stone unturned to reach the dead among the living. [Hour-long episodes]

SEASON PREMIERE: “Keeper of the Light” – Premieres Saturday, October 1 at 9 p.m. ET/PT on Travel Channel and Streaming on discovery+

TAPS reunite with Amy Bruni, Adam Berry and Kris Williams in the Florida panhandle, where a new exhibition is stirring up paranormal activity at the Pensacola Lighthouse. The worried staff want to make sure that visitors won’t be harmed by the unsettled spirits.

“Bound by Blood” – Premieres Saturday, October 8 at 9 p.m. ET/PT on Travel Channel and Streaming on discovery+

TAPS check out the frightening paranormal events inundating Osterhout Free Library in Wilkes-Barre, Pennsylvania. With the help of former Olympic ice skater Johnny Weir, the team dives deep into the space of this former church that stands on land bloodied by Revolutionary War violence.

Paranormal investigators Zak Bagans, Aaron Goodwin, Billy Tolley and Jay Wasleycontinue their terrifying travels to haunted destinations in a brand-new season of GHOST ADVENTURES, where they meet with locals, eyewitnesses and experts in an attempt to piece together the haunted history of each site. They then begin their “lockdown” investigation, using the latest scientific gadgets and technology in an effort to obtain physical evidence of the paranormal and uncover the truth behind each haunted mystery. [Hour-long episodes]

Zak Bagans and the crew go far off the beaten path in Arizona to investigate an abandoned sanatorium. Dozens of deaths, including the murder of a child, have left a heavy residue of pain and suffering on the building making it a hotbed for aggressive poltergeist activity.

A mystery is buried beneath the streets of Butte, Montana, also known as “The Devil’s Perch,” and the spirits tethered to the historic mining town’s seedy past are rising to the surface. With the town intent on rebuilding its image, it seems every renovation project is digging up a paranormal nightmare with residents and businesses reporting terrifying ghostly encounters. To help restore order, the mayor and sheriff enlist the help of paranormal investigator Dave Schrader, psychic medium Cindy Kaza and tech expert K.D. Stafford to stop the wave of unnatural occurrences plaguing the town. The team unearth disturbances ranging from feuds between rival mine owners and lovers resorting to violence to vice-fueled horrors. But when they discover an army of trapped spirits crying for help, their investigation takes a whole new turn. [Hour-long episodes]

Dave Schrader, Cindy Kaza and K.D. Stafford are called to Butte’s historic courthouse after a woman has a strange encounter with an apparition. When they uncover a history of brutal public executions, the team fear one of the spirits roaming the halls is out for blood.

Dave Schrader, Cindy Kaza and K.D. Stafford have identified the dark entity behind the trouble in Butte. Now they must confront this “monster” hundreds of feet below the ground in what could prove to be the most harrowing paranormal battle of their lives.

Some of the most amazing, eye-opening and downright scary paranormal videos from around the world are featured as a panel of experts break down the footage and analyze what exactly the eyewitnesses captured. Insights from some of the most knowledgeable specialists in the field and firsthand accounts from the people lucky enough – or perhaps unlucky enough – to witness the strange phenomena themselves just might make a believer out of even the biggest skeptics out there. [Hour-long episodes]

Spirits take their seats in a haunted auditorium in Pakistan. A father and son on a hunting trip catch sight of a Sasquatch. A ghostly figure mysteriously fades away as it walks toward a morgue in Peru.

A man leaving work is startled by a gigantic UFO. A convenience store in Malaysia is visited by the dangerous and voluptuous Hantu Tetek. An abandoned temple in Ohio is haunted by a horde of shadow people.

In HAUNTED SCOTLAND, renowned American medium Chris Fleming and Scotland’s Gail Porter lead an expert paranormal team to investigate the chilling crimes, supernatural sightings and terrifying stories across one of the most haunted countries on earth: Scotland. With exclusive access to places where a film crew has never been allowed before, they will try to make contact with the spirits to explain the paranormal mysteries that have haunted Scotland’s most iconic landmarks for centuries. [Hour-long episodes]

The Tron Theatre sits on the shell of a church that burned to the ground during an ancient ritual performed by the Hellfire Club. The team needs their wits and rosary beads to battle the dark entities unleashed by the infamous secret society.

The village of Culross was the epicenter for one of the worst witch hunts in European history. The team attempts to make contact with the tortured souls of the wrongfully accused to bring them peace and hold those responsible for such unspeakable cruelty to account.

Jack Osbourne returns to the United Kingdom to revisit his childhood home and past haunts in the county of Buckinghamshire – a notorious paranormal hotspot – seeking the dark truth behind terrifying, unexplained mysteries and experiences he had there as a young boy. On his journey, Osbourne makes stops at the family home where he spent his formative years, a local theater and ancient pub, and Missenden Abbey, a notoriously haunted locale that was the scene of regular childhood school trips. [Hour-long episodes]

Ghost hunter Jack Osbourne returns from Los Angeles to Welders House, the family home, in paranormal hot spot Buckinghamshire, where he spent his formative years. Will he unlock the secrets of the terrifying, unexplained experiences he had there as a young boy?

Expat ghost hunter Jack Osbourne revisits haunted U.K. hot spots from his past – the theatre where Ozzy Osbourne and Sharon Osbourne took the family to see pantos as kids and the ancient local pub down the road –both rife with ghost sightings and unexplained supernatural activity.

The Ghost Brothers – Dalen Spratt, Juwan Mass and Marcus Harvey – flip the switch on paranormal lore by shining a light on its darkest secrets. In the second season of GHOST BROTHERS: LIGHTS OUT, the hype men of the haunted investigate iconic paranormal hot spots to find out if the legends are really true and if these places are still plagued by the horror of the events that occurred there. Using unconventional experiments, they are ready to expose the haunted holdouts hanging around these locations. [Hour-long episodes]

Dalen Spratt, Juwan Mass and Marcus Harvey investigate a century-old haunting at the notorious Ohio State Reformatory. But as they confront the entities still lingering in the massive, abandoned facility, they become targets of terrifying paranormal activity of more recent origins.

Dalen Spratt, Juwan Mass and Marcus Harvey investigate shocking reports of ghostly goings-on at the legendary Bobby Mackey’s Music World. What starts out as a friendly mission at the haunted honky-tonk quickly escalates into a dangerous situation when the spirits set their sights on Harvey.

Dalen Spratt, Juwan Mass and Marcus Harvey investigate the infamous farmhouse that inspired the horror blockbuster, “The Conjuring.” The guys will stop at nothing to get answers about this legendary haunting, including sacrificing one of their own to a powerful succubus.

Global pop superstar Kesha has a deep passion for all things supernatural and has spent most of her life searching for answers to the world’s biggest mysteries. Now she is expanding on her fascination with the unknown in a cinematic, hands-on paranormal series chock full of mysterious adventures. Follow Kesha and some of her celebrity friends on a cosmic exploration of the afterlife, as they travel to mind-blowing haunted locations and search for all things unexplainable. [Hour-long episodes]

“Songs for the Dead” – Premieres Saturday, October 8 at 10 p.m. ET/PT on Travel Channel

Kesha and pop star Betty Who unravel the mysteries of Antoinette Hall, one of America’s oldest and most haunted opera houses. The deeper they delve into the dark secrets beneath the old stage, the more aggressive the spirits become with Kesha and her crew.