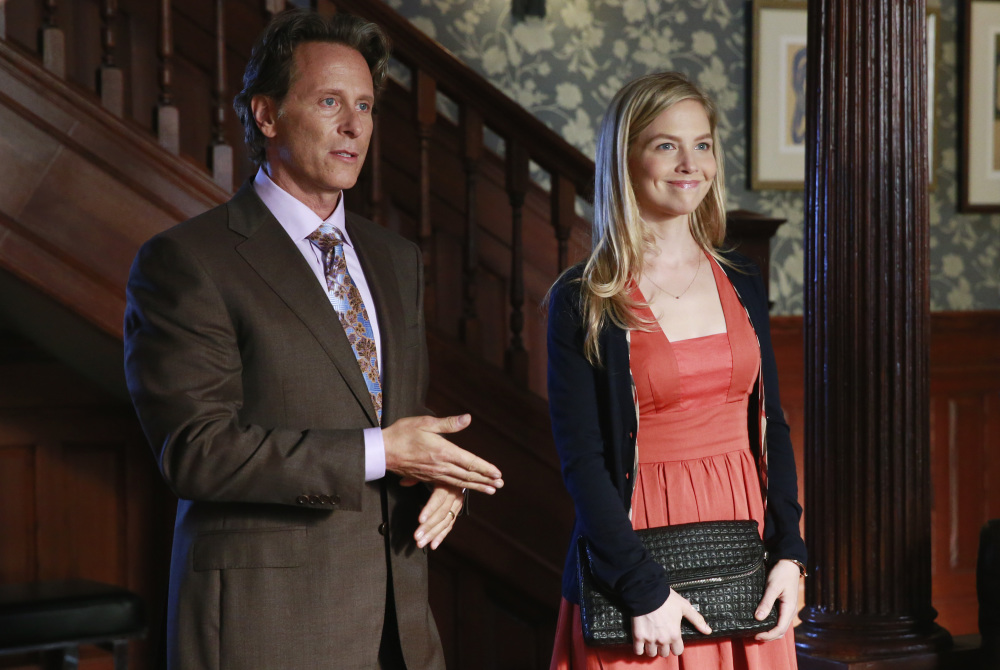 *Warning: Spoilers* As if last week’s case wasn’t a humdinger! In this episode “It’s All Her Fault” we continue to go back and forth from the past to moments right after Annalise’s husband Sam Keating’s (Tom Verica) murder. I’m glad that we get to see more of Sam as we didn’t get nearly enough last week. We also learn more about Wes’s role in the murder and see him shine at parts on the defense case the students help Annalise win. Wes isn’t looking so innocent and naïve these days! Okay maybe he still has that naïveté. The title of the episode definitely has more weight by the end! Let’s break the episode down here. 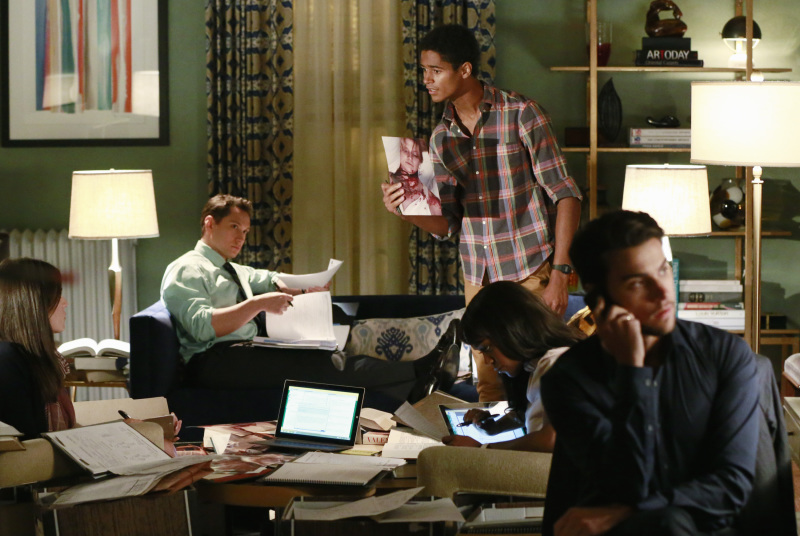 The law students in Annalise’s class take on another murder case in the form of a millionaire named Max St Vincent (Steve Weber) accused of murdering his 2nd very rich wife. Annalise charges her students to prove that he’s innocent, even when evidence shows the contrary. How she talks about people in general and asks can you trust them was a really good theme for the overall episode, especially in how it pertains to clients and character witnesses. Steve Weber was great as St Vincent as he brought that creepiness and ruthlessness to his character. I wouldn’t want to marry him as he seems to enjoy killing too much.   This shows when he is reenacting the murder with Connor and again when he is on the stand demonstrating a stabbing technique with Bonnie. His daughter Eloise (Laura Coover) seems to have followed in her father’s footsteps as Wes was strongly suspicious of her murdering her stepmother. Despite the serious oversight by everyone for missing that St Vincent was accused of murdering his first wife, Connor, Wes, and Laurel still stand out as those that assisted Annalise with her case the most. Asher and Mikaela better step their game up! I’m glad that Laurel is slowly developing a backbone as she produces an idea that winds up saving the case. It was smart of her to follow Bonnie’s advice. It was getting frustrating when she looked like she wanted to say something but one of the more aggressive students would beat her to talking.   It was nice that Annalise acknowledged her potential. Bonnie showed that she could be good in a courtroom with the questions she was asking Eloise as practice for her testimony. I agree with Annalise, it’s the quiet ones are the usually the most dangerous. We are certainly starting to see that in both Wes and Laurel here! 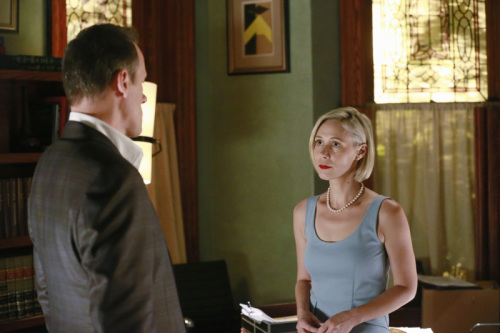 Developments are made in the murder of Lila. The boyfriend that Wes saw arguing with Rebecca (Kate Findlay) last week was arrested in connection with the murder. Ms. Rebecca seems to be worming her way in to Wes’ life, which he seems to want. She tries to act all coy in using Wes’s bathroom and gets naked in front of him like she didn’t know he was already interested. She winds up leaving a phone in his bathroom which he discovers after she also gets arrested as a person of interest. How convenient. Why don’t you leave the passcode while you’re at it? Ms. Findlay is a manipulator and Wes is naïve enough to fall for the okie doke because he likes her. Meanwhile Annalise is suspicious of Sam and thinks he has something to do with Lila’s murder. She also wonders if he had an affair with this student. I love how she snoops on his phone like any other suspicious wife. She even manages to convince Nate to help reassure her that Sam had nothing to do with the murder by doing some investigating. I loved that scene because Nate was trying not to get sucked back in but Annalise was giving him those puppy eyes and he grudgingly accepted to help her. We also get to see some scenes between Tom and Annalise that were steamy! I’m wondering if she’s trying to convince herself that Sam is not involved by trying to get their love life back on track. The scene between Sam and Bonnie where she expresses sympathy convinces me even more that that they are the affair Annalise refers to later on in the episode. 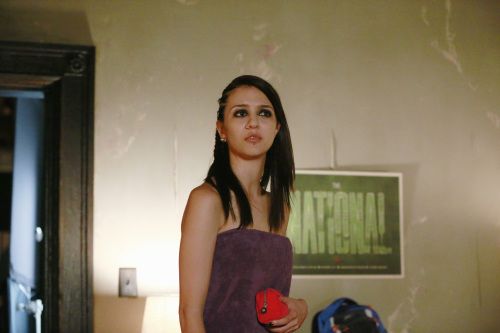 We go back to the scene where Connor, Michaela, and Laurel are waiting for Wes to come back after the murder. Michaela mentions that it’s “all her fault” which seems to indicate that a female was initially involved with the murder. Wes brings the weapon and flips the coin to decide whether to go back for the body. Wes lies about the results of the flip! We see Wes take charge and act more assertive in what they need to do to keep Sam’s murder a secret. At the gas station we see him buy a prepaid phone and reassure the other person on the line that everything will be okay. The show was real slick in sliding back into the past with Annalise also on the phone, which seemed to indicate that in the future the same thing would happen. We later find out that Rebecca is the one he was on the phone with. It appears as though Rebecca’s seduction worked. So not only is Rebecca involved with the murder of Lila, but she is now involved with Sam’s murder? Wes couldn’t have picked a more destructive relationship to be in. I’m with Michaela, I don’t trust her.

Other nuggets in the show

I tripped out when St Vincent was trying to set up his daughter with Wes! “Think of the beautiful babies you two would make!” Did St Vincent sense that there is a killer lurking in Wes? That is something to ponder for sure. While I’m enjoying Matt McGorry’s portrayal as Asher, I feel like the character is still one dimensional. I do like that in this episode he stated a theory as to why Wes is getting favorable treatment. In fact, on our podcast Scandalous Thursdays, Llana had that theory that Wes was a child that Annalise gave up for adoption! It was like the writers of the show read her mind! Also it was nice to see Connor have this tough demeanor but seems to care for the hacker guy he used in the premiere episode. I’m looking forward to seeing Connor develop more and Jack Falahee brings charm to the character. Here’s hoping we get more Michaela scenes as she was underutilized in the episode. I’m waiting to see who her fiancée is.  We also get hints about Rudy, the last tenant before Wes. I want to know more about him, especially with those scratch marks on the wall. 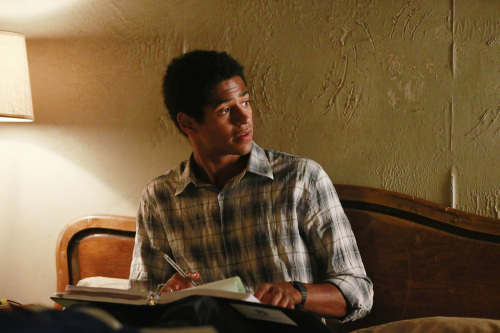 So the questions I have now are:

What did you think of the episode? Sound off below in the comments. We can’t wait to discuss more on our Scandalous Thursdays podcast!

Episode 2 was enthralling! It is interesting to see all the dimensions of the characters unfold.
https://www.facebook.com/groups/HTGAWMEnthusiasts/

Thanks for commenting! We are loving the show as well. I am so happy that Alfred Enoch is getting such a meaty role in Wes. Looking forward to the next episode! Hope to get more development in other characters. Be sure to also check out the Scandalous Thursdays podcast! ~Natasha aka Natty

Do you have the link to Scandalous Thursdays or is it iradio ? Sawry, Not familiar. ~Mylan

Here is the link on Podbean: http://scandalousthursdays.podbean.com/. We also have an article on the website where you can listen as well. http://www.thenerdelement.com/?p=6034 ~ Natasha aka Natty