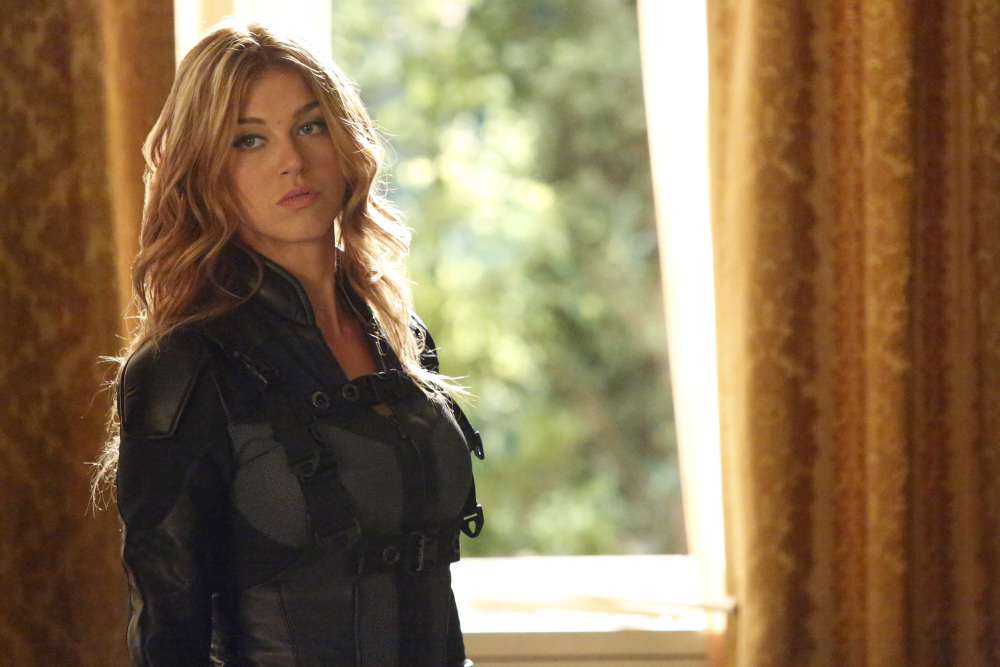 What a debut of the comic book character Bobbi Morse aka Mockingbird on this week’s episode called “A Hen in a Wolf’s Den.” I really like Adrianne Palicki in this role and can’t wait to learn more about her. On to the recap!

This show makes me want to avoid champagne all together! Hydra poisons several military anti-Hydra unit members during a wedding reception.  Some died while others got sick.  The toxin has similar side effects as the obelisk in that there are charred distorted body parts.  A group of Hydra agents posed as waiters provided the poison in the champagne.  During their getaway they report to Bashki (Simon Kassiandes) that only eight people died. Bashki mentions that Dr. Whitehall (Reed Diamond) won’t be pleased as the mission is considered another failure. I don’t want to get on Dr. Whitehall’s bad side!

Coulson and his team get wind of the attack and assume that Hydra has the obelisk.  They pow wow to see if they are able to investigate.  Coulson says that’s a no go since the Navy closed ranks on the investigation.  Coulson was drawing those strange writings on his desk right when his team walks in with the news and Skye and May notice the drawings.  Agent Tripp asks if Simmons knows anything but Coulson says she hasn’t reported to him yet.  The markings Skye has been looking at are mentioned.  Coulson and Skye have a brief confrontation when Skye calls him out about skirting around revealing who is writing the strange markings.  I chuckled when Hunter and Tripp looked at each other like “is she really trying to undermine Coulson here?” 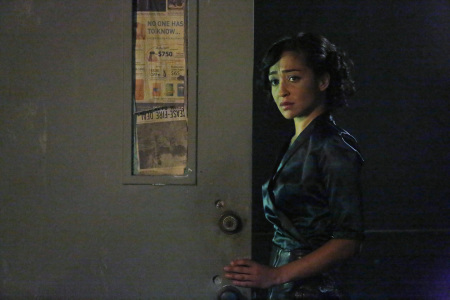 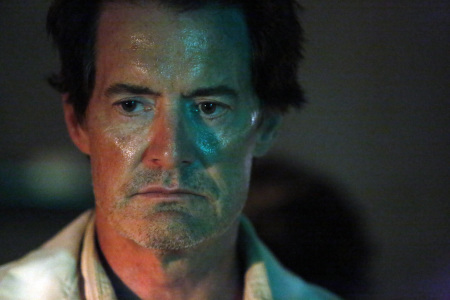 Skye’s father (Kyle MacLachlan) reams Raina (Ruth Negga) for not bringing Skye to see him, especially after she asks to “borrow’ the obelisk. Raina tells him that Dr. Whitehall wants it.  Skye’s dad starts choking the poor girl when it appears as though she is more afraid of Dr. Whitehall instead of him. Raina mentions he’s losing control again. Hmmm, this has happened before? She manages to convince him that she is the only one that can bring his daughter to him so he stops choking her.  Dad refuses to hand over the obelisk.  We learn during this conversation that Skye’s dad found Raina in the streets when she was young and helped raised her. That’s an interesting backstory.  Raina was barely able to hold it together.  I miss that confident demeanor she had a few episodes ago. Skye’s dad mentions that “Skye” not even his daughter’s name.  What the heck is it then?

Bashki summons Simmons and Turgeon (Adam Klubersh) to a Hydra head meeting.  Dr Whitehall heads the discussion to try to figure out how to successfully duplicate the deadly effects of the obelisk.  He asks Simmons what went wrong in the duplication process but she’s looking at the report while he’s talking. Simmons is able to tell them that if they get the obelisk they should be able to adequately weaponize the effects, which pleases Whitehall.

Hunter suggests that Skye talk to Ward to figure out what Coulson is hiding. She does.  They start the conversation about Skye’s dad being alive.  Ward names Raina as his source but Skye thinks Raina played him.  Skye ends that topic and switches to the drawings.  Ward mentions that Garrett used to draw them and went crazy because the urge to draw them was there every day.  He’s relieved to know that Skye is not the one doing the drawings.

Raina is on her way to see Whitehall when she notices Simmons leave to go to the park. Raina follows her and catches her sending a message to Coulson.  Armed with that little tidbit, she calls Coulson for a meeting.

Skye confronts Coulson again about him being the source of the writings.  Coulson reassures her that he’s fine but he thinks he had a negative reaction to the GH formula he was injected with.  One of those reactions is the markings.  Since Skye also received the GH formula Coulson is trying to find out why Skye doesn’t have the same reaction.  She was not pleased to learn that she was being monitored for that very reason. Not only this but Coulson also has a theory that Skye may be partially alien.  Skye scoffs at this of course.  I’ve been wondering why Skye is so special, maybe Coulson isn’t far off the mark? 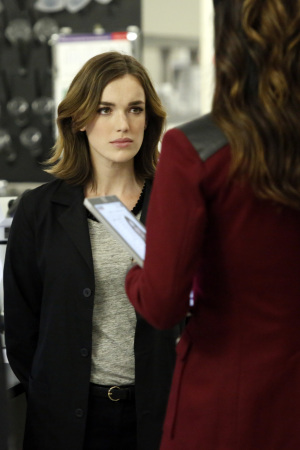 Back at Hydra alarms go off.  Bashki enters the lab with an intimidating head of security, Bobbi Morse.  They were tipped that someone was sending S.H.I.E.L.D messages. No one is allowed to leave.  Simmons looks at the special coded message sheets she’s been using in her drawer.  Uh oh! Morse approaches Simmons about her track record at S.H.I.E.L.D but Simmons manages to keep a cool head.  Fortunately Simmons managed to put the message sheets in Turgeon’s drawer and he gets caught. Whew! Close call! Or so we think. Morse is still suspicious of Simmons when she questions her in the ladies room. She asks about her computer and Simmons mentions it only has Hydra materials.  Not looking good there Simmons!

Coulson meets with Raina at a nice little restaurant. Hunter is watching from another table.  May and Skye are in the kitchen. Raina plays coy at first but then plays her ace. She threatens to send Hydra a photo of Simmons with the message sheet if Skye doesn’t come with her to see her Dad.  She emphasizes her threat by putting a timer on her phone to send the picture after the 2 minute mark. Coulson thinks she’s bluffing. As the time quickly ticks down Raina starts panicking because Coulson is acting way more calm than he should. May is trying to convince Skye not to go with Raina by telling her Coulson has a plan.

The clock stops. Everyone at Hydra gets the photo of Simmons. Uh Oh! Raina made good on her threat. Simmons is compromised! She makes a run for it but appears to get caught by Morse and two guards, or so we think.  Morse breaks out with two silver metal batons behind her back and proceeds to kick some Hydra butt! I was sold when they did the slow mo bendy knee pose with a full hair flip! She was Coulson’s plan.  He asked Morse to infiltrate Hydra to keep an eye on Simmons! They reached the roof to make their escape, and they jump off the roof onto the top of an invisible jet. They go in and Tripp is the pilot!  They head on back to headquarters.  Bobbi reaches in her shirt to pull out the disk from Simmons’ computer.  At least they have some kind of intel to take back to the base.

Meanwhile back at the restaurant Raina is desperate.  She spills all to Coulson about the fact that Hydra wants her to give the obelisk but Skye’s father has it. She even asks to join Coulson. He is very unsympathetic and has Hunter inject her with a tracer so they can find Whitehall.  Hunter walks Raina out.  Before she left she provided an address that’s close by to find Skye’s father. May and Coulson remember Lumley’s warning from season 1. They realize Skye’s missing.  Skye finds the place where her Dad is located and goes in where she finds a picture of her dad holding a baby. Coulson catches up with her, gives her a hug, reassures her they will find him.  May finds dead bodies with their throats slit and Coulson finds a camera in the room.  Skye’s father is watching in a car outside and punches the tablet when Skye sees the dead bodies and he finishes her sentence with monster.  He drives away in anger.

Back at headquarters Simmons is welcomed back by Coulson and May. She then goes to see Fitz. Simmons is cautious with Fitz asking generic questions and we leave with her asking “How have you been?” I’m really wondering what Fitz’s response would be. I wanted this reunion so bad and to see this awkwardness between them just breaks my heart.

Bobbi greets Mac who gives her a big hug. We learn that she loves martinis “Hold the olives.” We also learn that Bobbi is none other than the ex who Hunter has been complaining about in the last few episodes. She even mentions that the only reason he’s even at S.H.I.E.L.D is because she recommended him.  I’m really interested in seeing how that relationship dynamic plays out. Tripp was adorable when he was like “Dang,” after watching Hunter and Bobbi argue.

Skye demands that Coulson keeps her in the loop from now on.  She understands that he needs to go after her father because he has the obelisk and will help in any way she can.  Coulson shows her the markings he drew recently in one session.  She figures out that the markings are a map.  But what place is the map leading to? What planet? 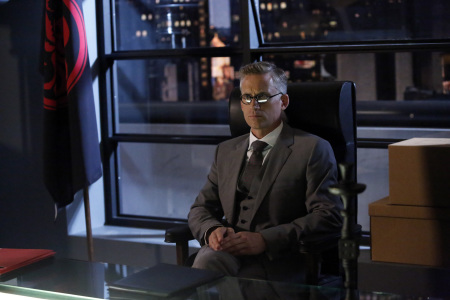 At Hydra, Dr. Whitehall and Bashki are coordinating moving their offices to a different location.  Skye’s father walks in with the obelisk aka the Diviner.  Whitehall is wondering why would Skye’s dad help him with the obelisk.  Skye’s father responds, ” We share a common enemy.  A guy named Phil Coulson. I thought maybe together you and I could kill him….along with everyone else.” While Kyle MacLachlan smirked I felt like either Skye’s Dad or Whitehall should have done an evil laugh.  Watch out Coulson and the rest of the team! That’s two very powerful enemies coming after you!  Can I have a name please for Skye’s dad?

What a tense action packed episode guys! What are you looking forward to seeing next week? What are your thoughts on the debut of new agent Morse? Sound off below in the comments!