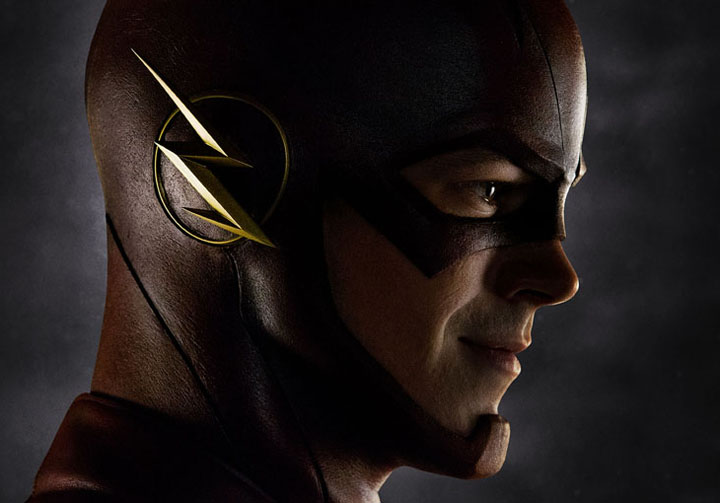 With much anticipation since earlier this year, audiences have been waiting to hear Grant Austin say, “My name is Barry Allen and I’m the fastest man alive!”  With impressive debut ratings, The Flash has finally arrived with their first episode!

Barry Allen’s backstory:   One night, 11 year old Barry wakes up to see strange flashes of light in the living area surrounding his mom.  His mom died from this strange event and his Dad, Henry Allen (John Wesley Shipp) was sent to jail falsely accused of the murder.  He was then raised by Detective Joe West (Jesse L. Martin) who is his best friend Iris West’s (Candice Patton) dad.

Present day: Allen works for the police as a CSI.  Unfortunately he has a bad habit of being late, but makes up for it with brilliance in figuring things out like what type of getaway car robbers drive as well as a potential location.  He also has a huge crush on Iris.  One night his life changes forever.  Let’s start with earlier that evening:

S.T.A.R. Labs is debuting their Particle Accelerator, created by physicist Harrison Wells (Tom Cavanagh) which should change the way people view physics.  At the event Barry tries to reveal he has feelings for Iris in a round-about way but fails.  I felt bad for him because Iris was not taking the hint and puts him in the friend zone. “You can talk to me about girls Barry!” Poor Allen, I’m rooting for you! Barry then tries to do the noble thing when Iris gets her bag stolen which contains her dissertation by running after the perp. When he catches up to the crook he tries to convince him to give the bag back and gets hit in the stomach for his troubles.  He then gets overshadowed by Detective Eddie Thawne aka “Pretty Boy” when he manages to stop the bag snatcher.  It appears as though Iris wouldn’t give him the time or day based on what she heard about him keeping score on his arrests but she did admit that he was “pretty.” Yep, we know where that is going.

It’s storming outside.  Detective West and his partner go to the last farm on a list Barry provided earlier in the day that could contain the Mardon brothers who robbed a bank and killed a security guard.  They hit pay dirt. During a gunfight West’s partner gets killed.  At the same time news reports are saying that despite the storm, the accelerator will still be turned on.  An explosion happens at S.T.A.R. Labs because they lost control over the cooling system.  The sky is lit up by this explosion.  Barry sees it from his place.  Gravity is going haywire as things in Barry’s apartment start to float as well as him!  The Mardon brothers meanwhile manage to escape on a plane, only for the plane to blow up when it hits the energy that the explosion projects.  Fortunately West comes out okay. Lightning strikes Barry! He gets rushed to the hospital. Iris tries to hold it together as the doctors work on him.  The doctors zap him….

And we flash forward to 9 months later.  Barry wakes up and sees Dr. Caitlin Snow (Danielle Panabaker) and Cisco Ramon (Carlos Valdes).  They tell him he’s at S.T.A.R. Labs, he was struck by lightning, and he’s been in a coma for nine months.  Snow and Ramon try to examine him.  Wells, who is now in a wheelchair, explains to Barry what happened that fateful night. He also tells him that West and Iris gave Wells permission to take Allen so he can get treatment since he kept on coding at the hospital.  Wells would like for Barry to stay so they can run tests as they do not know what effects the lightning had on him.  When Allen finds out Iris visited him often, he decides to leave and go see her. Awww, she is the first person he wants to see! Iris is real happy to see Allen when she sees him. Allen also reunites with Detective West.  During both reunions he notices that time seems to slow down.  The first time he sees a waitress drop her tray then quickly cleans the area then the next time he manages to stop a criminal for reaching for an officer’s gun.  Allen freaks out a little bit, then gets excited that he seems to move really fast.  As with any newly discovered power, he wants to test it out.  He goes back to S.T.A.R. Labs where they run tests.  We quickly learn that Allen needs to learn how to stop without injuring himself, even though he’s a fast healer.  They soon discover that Allen is not alone in developing special abilities after the accelerator explosion.

Clyde Mardon (Chad Rook), survived the plane explosion with powers of his own. He has the ability to control wind and clouds by creating tornadoes.  He starts robbing banks again and when West first hears about it has a hard time believing that he’s even alive.  Allen’s first encounter with Mardon didn’t go so well as Mardon created a fog so thick that a car hit the car Allen was driving.  When Allen tries to tell Detective West that Mardon is alive and has powers, West doesn’t believe him.  They bring up the fact that it is foolish for Allen to still believe his dad didn’t kill his mom.  Wells doesn’t help by telling him not to risk himself by playing hero.  Feeling discouraged about his new found abilities, as well as a broken heart upon learning Iris is secretly dating “Pretty Boy” Thawne, Allen runs to Starling City.

Oliver (Stephen Amell) aka Arrow makes a cameo when Allen asks him for advice.  He encourages Allen to fight for what’s right and if he has a gift, use it.  The lightning chose him to save people in a flash.  West and Thawne confront Mardon, with West finally seeing the supernatural abilities like Allen said.  With a second wind, Allen confronts Mardon who creates a tornado big enough to cause serious damage to the city.  “Run, Barry, run!” Wells says.  With a new suit, created by Ramon, Allen counters Mardon’s tornado by running counterclockwise to the direction the tornado was rotating.  Mardon gets shot by West.  He apologizes to Barry for not believing him earlier. West requests Allen to not tell Iris of his new found ability.  Sigh, not a good idea.

Barry visits his Dad in jail and reassures him that he will continue to find out what happened the night his mom was killed, especially after remembering seeing someone briefly zigging in that light he saw..  I like Barry’s father, played by John Wesley Shipp. I think he has a good father/son dynamic with Austin. It’s nice to see the old Flash interact with the new iteration of the character.  Their scene together was so touching because Barry always believed that his Dad didn’t kill his mom.

We see Wells go to a secret part of the building, stand up from his wheelchair and go to a machine with a newspaper article from the future.  The headlines mention the Flash is missing.  Why is Wells lying about his paralysis?  It looks as though they are setting up a situation where Barry goes back in time to find out who killed his mother only to realize he may have indirectly caused her death.  That would be so tragic.

This was a good debut episode.  Austin brings charm and humor to Barry Allen.  I like all of the actors and the characters that have been introduced so far.  Martin fits into the role of a detective like a glove from his Law & Order days.  I look forward to seeing more character development between Wells, Ramon, and Dr. Snow.  Seeing that team dynamic continue to develop on screen will be cool.  What I’m concerned about is the way they are handling Iris being clueless about Allen’s powers and her being intrigued with the hero who secretly loves her.  We saw something very similar in Season 1 of Arrow with Laurel and Oliver.  Hopefully they will change it up slightly.

There were several cute scenes in this debut episode.  One such moment was when Barry looks at a monitor screen after waking up from his nine month nap and asks “Lightning gave me abs?”  The show has a nice balance so far between humor and seriousness.  The effects of this episode were really well done as it didn’t feel cheap or over the top, especially when Barry was running around Mardon.  Hopefully that continues with each episode.  I’m looking forward to seeing the villians as several of them are played by actors that I have seen on other shows. For example, the brothers from the show Prison Break, Wentworth Miller and Dominic Purcell playing Captain Cold and Heat Wave.  I’m also looking forward to the crossover episode between Flash and Arrow!

The premiere of The Flash has set the tone and I’m looking forward to seeing more! What did you think of the episode? What about the actors playing these characters? For the comic book fans, are there any storylines you hope they cover? What easter eggs did you notice? Sound off below in the comments!

*Photo courtesy of The CW/Jack Rowand

Into the Badlands Ep 2 Recap and Review: Fist Like a Bullet!