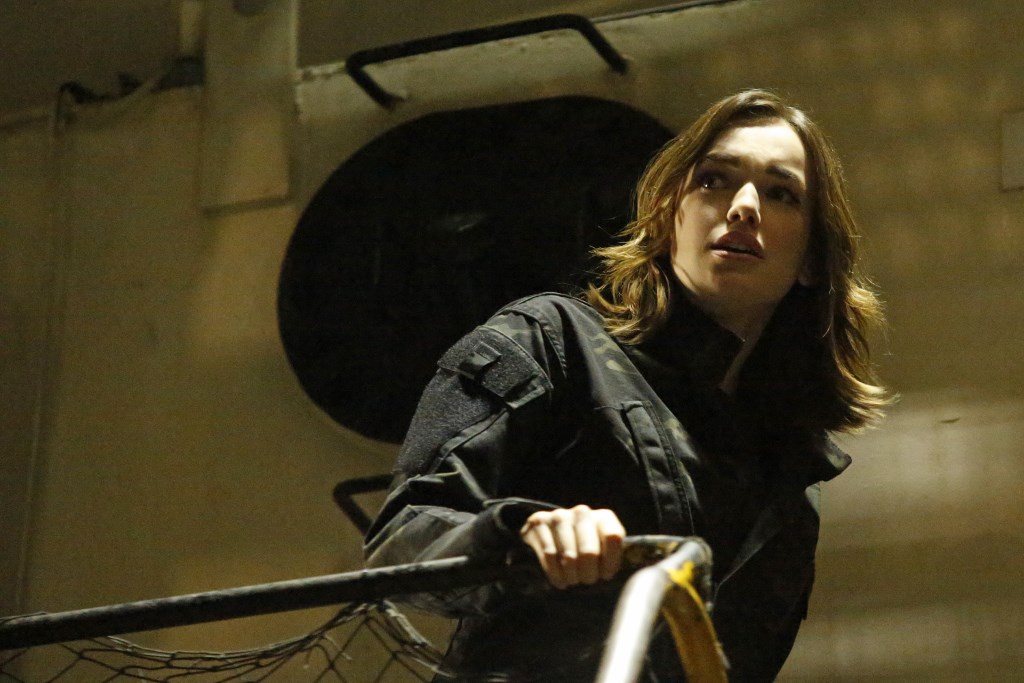 *Warning: Spoilers for this episode!* Simmons is back and has infiltrated Hydra headquarters gathering intel for Coulson in this episode of Agents of S.H.I.E.L.D titled “Making Friends and Influencing People!

We find Dr. Whitehall (Reed Diamond) of Hydra attempting the Faustus method on Agent 33 (Maya Stojan) while sipping on some very expensive wine. His brainwashing technique includes saying a mantra while Agent 33 stared at a screen with weird kaleidoscope shapes and a whirring sound. His mantra went as follows:

Surrender, and you will find meaning.

Surrender and you will find release.

You know what’s best. What’s best is you comply.

Compliance will be rewarded. Are you ready to comply?

Well, Agent 33 says she’s not going to work for Hydra. Riiiight. For real though, if I had to look at that screen and listen to that mantra I would just say “I comply” just to get it to stop. Why didn’t anyone else think of that?

We then pan to a very bright and smiling Simmons waking up to some music as she prepares for the day. She even walks into the office smiling. I’m not a morning person so I would cringe seeing someone like Simmons looking so bright and happy. I like the haircut Simmons has! It’s cute! We then find out what this office is, dun dun dun, Hydra headquarters. Say it isn’t so Simmons!

May is teaching Skye more control when using guns. I guess imagining the targets as Ward is not being in control. At least it appears as though she has improved her marksmanship. Periodically we see Skye check her heartbeat and she gets concerned each time it goes up. Agent Hunter loses a wager with Mack on whether Skye went to the academy. Hunter also apologizes to May for the 470th time. May’s like, “Don’t be sorry, just wait.” We found out what that meant later on in the episode! Hunter wonders if Skye has taken anyone out. She replies no.  May assures her that experience doesn’t help when dealing with taking lives. 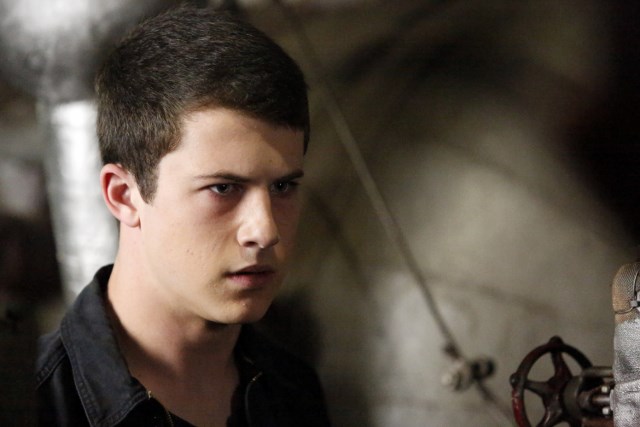 oulson returns from a failed recruiting mission. He was trying to get Agent 33 to come back but Hydra got to her first. He’s sick of losing people to Hydra.   Speaking of Simmons we go back to her in the lab. Her supervisor asks for an analysis of what she’s discovered from the sample she was given. When she suggests she goes with him to present her findings to her supervisor, Kenneth Turgeon (Adam Klubersh) warns her it’s scary the higher you go. From the file Turgeon had, the sample Simmons examined was from Donnie Gill (Dylan Minnette) the kid that now freezes things because of getting struck by lightning next to a weather device that occurred in Season 1.

We find Mr. Gill aka Frosty (I like to call him that) in Morocco hiding from Hydra. When some of the agents try to apprehend him, he gets pissed and freezes them to death. He even freezes his host that gave him a place to stay. No manners whatsoever on someone that provided room and board. That was just cold blooded man!

Coulson confronts Jemma. After their conversation I felt relieved that Simmons was working undercover. Coulson is such a caring director as he brings food for Simmons and cooks it! I need Coulson to come over and cook for me! She debriefs him about what’s going on at Hydra and tells him about Gill having freezing abilities. Coulson advises Simmons to make friends at the office so she can work her way up. Jemma casually asks about everyone and Coulson responds that Fitz is continuing to get better. She does care!

Coulson informs the rest of the team that Hydra is after Gill. They learn that Gill was taught how to control his powers in the prison known as the Sandbox. Coulson asks Fitz for some insight on Gill since he worked with him. Fitz is again struggling for words but Mack helps him out. I love the dynamic that is happening with Fitz and Mack. Fitz seems to respond to him in ways that helps him improve his condition.   When Fitz asks about Simmons, May responds that she’s working another angle. Skye then goes to the basement and questions Ward on how Hydra recruits. Ward explains that Hydra doesn’t give you a choice of joining because you can either join or turn up dead, especially if you have powers.

Jemma tries to take Coulson’s advice of making friends by being super nice to Turgeon when he mentions that she has been requested upstairs on a security issue. Simmons goes upstairs and meets Mr. Bashki. Fortunately her cover is not blown as he felt like she lied about the fact that she knew Frosty. Simmons does very well under pressure by telling half-truths like Coulson told her. Bashki later brings her in to pick up Gill and convince him to rejoin Hydra. Bashki is presenting Frosty with a second chance. Meanwhile Dr. Diamond is still brainwashing Agent 33. He appears to be succeeding. See, patience is a virtue. 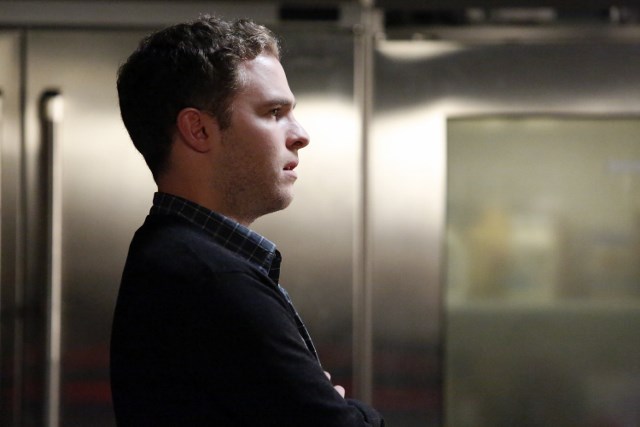 Hydra beats Coulson and his team in reaching Frosty in Casablanca. Frosty is angry and freezes several of the sailors on a ship. This kid has some serious anger issues.  Meanwhile Fitz is irritated that everyone is keeping things from him as well as leaving him behind. Even fake Simmons tells him he’s losing it. Fitz receives a shocker when he finds Ward. He then takes his anger and frustration out on Ward by almost suffocating him. Fitz needed to get that out of his system. Ward provides them with more information about how Gill was already brainwashed. Back on the ship, Simmons manages to find Frosty and starts saying the brainwashing mantra by repeating what Kashki says in the earpiece. Hunter and May find Frosty and Jemma. Hunter is about shoot Jemma but fortunately May shoots at him first. This upsets Tripp because he wanted to be the one to do it. Frosty almost freezes Jemma but he manages to only freeze her jacket. Simmons is chased by Frosty when they catch up with Bashki. He manages to finish brainwasing Gill who then proceeds to help them escape and trap Hunter and May in the ship. Just when it looks like Gill will be leaving with Hydra, Skye who was watching the exit, shoots Frosty. He lands in the water and freezes. In order to maintain Simmons’ cover, Skye tries to shoot at Bashki but Simmons saves him. Skye then checks her watch again for her heartbeat. I don’t think we’ve seen the last of Frosty. At least Coulson and his team are able to recover more Hydra tech! Still a win for S.H.I.E.L.D.

Coulson has a heart to heart with Fitz. Fitz makes good points about being in the loop. When Fitz asks whether Simmons volunteered or if she was assigned to infiltrate Hydra, Coulson doesn’t answer the question. Why? Simmons gets promoted when Bashki discusses with Dr. Diamond her performance in recovering Gill. We will see how long Simmons can keep her cover. Like Skye says to Coulson, she’s a terrible liar. Speaking of Skye she goes down to talk to Ward again. Ward slyly tries to engage Skye in talking about her father, especially when she brings up his family. Skye shuts that conversation down real quick. When she checks her pulse it is rising fast. What happens when her pulse rises? Does she have an episode similar to Coulson’s? Does anyone know what happens? I hope we find out soon because I’m still trying to figure out what powers, if any, Skye has. The show has been teasing me since Season 1 I need to know! Also Hunter seems to be talking a lot with Skye. Is he interested? 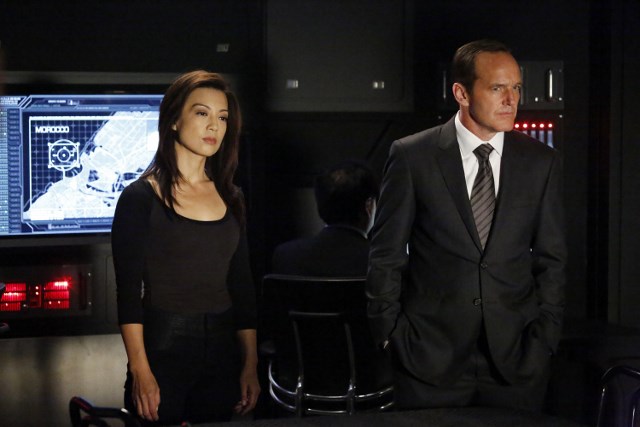 I’m hoping for more Tripp and May next episode although how they teased Hunter was hilarious. In the preview for next week it looks like Coulson and May will be going undercover to tango! I can’t wait to see that!

What did you think of the episode! Do you think Skye’s dad will make another appearance with Raina? Sound off in the comments below!

How to Get Away with Murder Ep 6 Recap