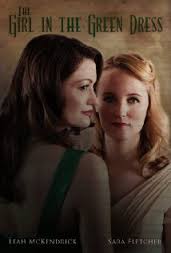 About a year ago, I fell in love with the hip, award-winning webseries Destroy the Alpha Gammas, starring Leah McKendrick who created, wrote and produced the popular series about two feuding sororities. Similar to FOX’s Glee, the series upped the stakes with the freedom of the net, able to give it a little more of an edgier feel.  Though the first season was a

colossal hit and was recently released in several other countries, the question as to whether there will be a season two remains to be seen.

This hasn’t stopped her from tackling several other projects, including her latest short film The Girl in the Green Dress, directed by Johanna Goldstein.  McKendrick, along with co-star Sara Fletcher, produced, wrote and stars in the tragic story of two women who find themselves attracted to each other in the 1950’s, a time when women were stifled by “picture perfect” expectations.

What inspired such an interesting interpretation of this era? McKendrick, along with co-star (and co-writer) Sara Fletcher, wanted to do a period piece that shows a different side to the Leave It To Beaver stereotypical shows of the 1950’s.  “A lot of women felt depression and sadness, weren’t free to talk about their feelings.  We thought wouldn’t it be cool to have two women explore a different connection?”

While things have changed quite a bit from the 1950’s thanks to the women’s right movement, among other advances, there is still a mindset that women aren’t equal to men. “A lot of girls are still treated like they are a little bit less important, that our dreams and feelings mean less”, McKendrick explains.  Her hope is that in 15-20 years we’ll look back at today and realize it was another “hard time in history, [with] women fighting for reproductive rights and that it will be so atrocious”, similar at how we look back at the 1950’s.

In today’s society, there is such a huge amount of pressure put on young people to look a certain way or be what someone else expects them to be.  McKendrick hopes the film will send the message to people young and old that no

matter who or what you are, you’re unique, special. “Whatever you feel in your heart, whoever you are, that’s beautiful and should be celebrated.” She recalls reading story about a teenage transgender girl who recently killed herself. “I feel horrible because she felt so alone.  If I could have had one conversation with her, I would have told her life would get easier, you will make friends in college in your twenties and thirties. You will find your group.”

Although society has progressed greatly from the 1950’s, we are still very judgmental of people and ourselves. McKendrick believes this short film questions “is it a positive thing to create a society where you can’t be yourself because everyone has to fit into a certain mold?” One of things she hopes people will get from the story is to say “that’s a terrible life and I wouldn’t wish that upon anybody.”  She adds, “These two characters can’t be themselves, it’s a tragic story.”

Having done a webseries that typically runs fifteen to twenty minutes in length, was it difficult to do a short film?  McKendrick explains that Destroy the Alpha Gammas was a much bigger production, with a huge cast and crew.  For this film, she gathered a small, all-female crew, whom she trusted.  “It was like girl power all day on set.  I really sort of enjoy working with women (not that I don’t with men) because there is a certain unspoken understanding between women and the story is female driven.”  She adds that it’s important to pick a crew and director willing to go to war with you because making a film is all-consuming, no matter if it’s a webseries, short or feature film.

In writing the short, McKendrick and Fletcher wanted to make it a precise, tight story. Originally, over twenty-five minutes long, they had their work cut out for them editing it down. “We wanted to trim all the fat, have it move, flow well and make it interesting.” Although writing the short was challenging, the biggest hurdle was creating a period piece set in the 1950’s.

Thankfully the set designer, Nicole Vardi, did her magic meticulously creating a 1950’s home so one definitely feels like they are standing in a moment back in time. McKendrick had no idea how difficult it would be to do a period piece, however, Vardi was lucky enough to have access to Universal Studios, which allowed her to effectively hearken back to the era.

Like in Destroy the Alpha Gammas, McKendrick shows her talent for dance in a couple of scenes which catapults the audience into an emotional roller-coaster ride.

Choreographed by Justine Menter, founder of  The Flirt Dancers in Los Angeles, McKendrick says she’s her “go to girl” whenever she does anything to do with dance.  Menter’s choreography is incredible in the film.  In a beautifully artistic depiction,  we see Ann (Sara Fletcher) and Paige (McKendrick) go through the thrill of finding each other, then the pain of rejection.  Both are living lives they feel trapped in, married to husbands who see them as nothing more than housewives, with no minds of their own.  I felt like they were being controlled by their husbands, given an allowance, told how to dress, etc… in this stereotypical universe, unable to do what they were passionate about. At one point Paige suggests she write a novel, which her husband immediately discounts. Later we learn she’s pregnant.  Ann’s husband appears disinterested in anything she has to say, so both are trapped as well as stifled, in a very real way- physically and figuratively. This film really makes you appreciate that while we still have issues in the 21st century, we have made progress.

The movie Beyond Deceit, created quite a buzz at the Cannes Film Festival in May, as one of the most anticipated films.  Set to be released next year, this is Shintaro Shimosawa’s (Writer, The Grudge, The Echo, The Grudge 2) debut as a director, as well as the first time Pacino and Hopkins have been together on screen.  McKendick describes it as a murder/mystery/thriller.  She explains it’s about a lawyer (Josh Duhamel), whose boss (Pacino) assigns him a case to take down a crooked pharmaceutical executive (Hopkins).  Unfortunately, Duhamel’s character gets pulled into a murder investigation as a suspect!  McKendrick’s character happens to see something she shouldn’t, so also gets entangled in the case.

With such Hollywood royalty in the film, what was it like working on the set?  McKendrick says that when stars are that famous, “it kind of doesn’t register that it’s happening [with me].” Although one would think Pacino and Hopkins might be intimidating, larger than life, they were quite the opposite.  She found it amazing how Hopkins went around introducing himself to everyone on the set, shaking their hands.  McKendrick gushes about the experience, “It was lovely.  Such a dream that still blows my mind and I can’t believe it.”  Interestingly, she admits to being much more nervous around Stiles than Hopkins or Pacino, being such a huge fan of hers.

While working with legends like Duhamel, Pacino, Hopkins and Stiles, what was the one thing she learned from them, that she’ll continue to use throughout her career? McKendrick talks about how she was nervous to speak up or ask for help.  Luckily her co-star Duhamel “is so open and real, willing to try new things and taught me I can do that too”. She describes, “I worked a lot with Josh and learned from him if he doesn’t understand how a scene is working, he’ll tell you and make it work.  It was so helpful because I was too scared to say anything.  Josh would work it and we’d ad lib. [I learned] that I don’t need to be afraid of this.” She adds that being on such a huge movie set like that, with legendary talent, can be intimidating. However, her “job is to make it look real, not be a hired talking head.”

Since meeting McKendrick, watching her grow from webseries producer/writer/star to film producer, it’s been interesting to see her progression up the ladder of success.  Obviously most get into acting, producing, writing or directing simply because they truly love it.  It’s their passion and they do whatever they can to continue their journey towards success. While some say it’s not realistic to aim for external rewards, that the goal is to be happy within yourself, McKendrick says to be hired as an actor is very validating.  “Being a producer/writer/singer/songwriter, I create work for myself because I go to auditions and may not fit what they’re looking for.  But to be hired as an actor, to be able to be on a huge set and do what I love, is super validating.”  She encourages actors to “fight for what you believe in and what you want to do, what you actually want and what will make you happy.  All it takes is one big opportunity to change your life.”

The Girl in the Green Dress recently premiered at a festival in Los Angeles and McKendrick hopes it will be released in a limited amount of theaters and/or festivals at some point.  After finishing her first big budget feature film she hopes to create her own and has a lot of projects coming up.

Whether working with legendary actors, creating her own series or films, with so much hard work and creativity, I have no doubt we’ll be seeing much more of this talented triple-threat in the future, Leah McKendrick.

Watch Destroy the Alpha Gammas, and follow her on twitter @leahmckendrick for the latest news on all her projects.