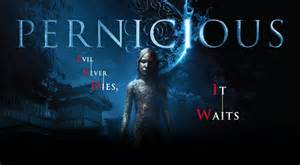 It’s that time of year again, when the air gets crisper, leaves change color and the 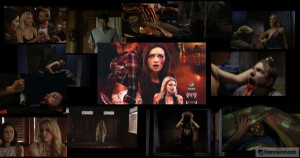 smell of wood burning fireplaces fills the air. October is my favorite time of the year. The only time when it’s okay to be addicted to supernaturally charged television and movies that entice us to be afraid…be very, very afraid! But that’s half the fun right? How many times have my friends and I scoped out an old cemetery or abandoned house just to see if it was haunted? How many of us had to sleep with the lights on after a very intense suspense thriller? This is the time when the veil between our reality and other worlds collide, supposedly allowing  our worst nightmares into this realm. Imaginations run a-muck with every little creek of the stairs or whisper that make us jump as darkness falls, ushering in the witching hour.

Nights are filled with horror as fans of the genre break out their favorite flicks. I never let the season go by without watching my favorite…can you guess what it is? I’ll give you a hint-the music alone conjures all kinds of suspense setting the tone that you know something evil is coming for you and death is on your doorstep…that’s right! Classic Halloween! I’ll never forget watching it on video for the first time with my friends during a sleepover–the moment I saw Michael Myers a chill ran down my spine! I mean, a little kid in a clown suit with a knife? Don’t get me started on my fear of clowns! While it’s definitely old school with none of the special effects we’re used to today, I love the way it was filmed, as John Carpenter’s Hitchcock-like vision takes the audience on a suspenseful horror ride. No matter how many times I’ve seen that closet scene, fear bubbles to the surface! The anticipation of knowing something is stalking you, lurking around the corner…it’s brilliant and paired with the theme music, anyone watching can feel the terror “creeping up behind, you’re out of time!” (Couldn’t resist adding Michael Jackson’s Thriller, LOL). 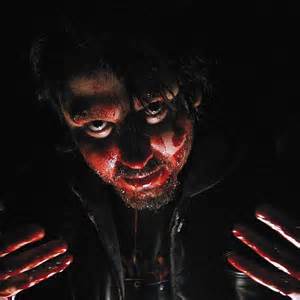 There have been many geniuses who have written and directed incredible horror flicks over the years- Stephen King, Alfred Hitchcock, Wes Craven, John Carpenter and Steven Spielberg are the first names that come to mind. However, a new name can be added to that list…James Cullen Bressack.

Bressack hit the Independent Film circuit and then rose to stardom with rave reviews for his award winning horror flick, To Jennifer. This innovative and unique movie shot only with an iPhone is one of the reasons I was thrilled to have a chance to chat with him about his latest creation, Pernicious.

Written and directed by Bressack, Pernicious is set in Thailand where three girls on vacation stumble onto what they think is a cool find- a solid gold statue. What they don’t realize, is that this discovery will unleash a diabolical entity hell bent on revenge that they won’t see coming!

The concept was conceived after being approached to do a film specifically in Thailand, Bressack hit the books researching the spiritual country and “found out about real black magic practiced many years ago in Thailand. They’d put a child, encase them in solid gold to entrap the spirit inside the statue and would bring it good luck. I was like this is the movie.” Although his first draft was crafted in just three weeks, it took a total of six more until he and his writing partner Taryn Hillin, were satisfied with it. For those who have aspirations of becoming a screenwriter, Bressack explains he initially put together a treatment that included all the scenes that “sets up where I’m going throughout the story. Then I write based off of that.”

It’s been quite an interesting journey for Bressack as his rise within the horror film genre has skyrocketed. What made him want to be a writer/director/producer? “I’ve always been the type of person that wanted to share stories with people and from a young age I really loved and enjoyed films so much.” He went on to explain that the biggest turning point in his life occurred at the age of twelve, when his father became really ill with liver failure. His father was his baseball coach, so this was a curve-ball to say the least, especially because of their close bond. “All we could do was watch movies together. I started to realize film is this thing that I love, but it was something you can share with anyone. Loved ones in situations like this.” Thankfully his father recovered. However, as his new found realization and purpose began to take shape, a few years later his parents divorced. As many kids who grew up in this type of situation knows, it’s tough. Especially being a teenager, which can be an extremely emotional time anyway as hormones begin to rage. Luckily for Bressack, movies became his escape.

“My mother lived a block from the theater so I would just walk to the movie theater every day. It kind of became my sanctuary really, so I just realized movies helped me with my childhood and I wanted to help people in their lives through my films.” He adds, “As you can see  with Pernicious, it’s that fantasy element. They go and find this golden statue that becomes their best friend, but will ultimately haunt and torture them! I’ve been a big fan of practical effects. I like these darker stories and still have fun with them. It’s an escape from reality in a sense.” I’ll agree with that statement!

Growing up some of his favorite movies were foreign horror films, specifically Korean and Japanese, which Pernicious pays homage to. Among his favorites he mentions Brain Damage, a horror movie about aliens injecting people’s brains and he “also really likes The Inside, one of the new wave films. The Hostile is amazing and the works of Wes Craven as well”

Speaking of Wes Craven, he was one of the film geniuses of our time who recently passed away. Bressack actually had the honor of working with him for four days on a project and was disheartened by the loss. “I was very upset about it. I spent some time with Wes a year before and he seemed fine. [He] was such a brilliant and 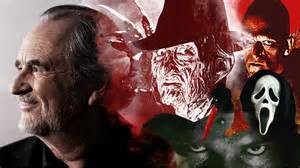 well-spoken person and genuinely kind. It was very sad.” What is one of the things he learned from Craven? “One thing that resonated with me, he said if you’re in this business long enough you’ll get your shot. Keep going and those who go through the rough patches, are the ones that make it. Sometimes you do well, sometimes you don’t but if you keep at it, it’s going to pan out well.”

One of the things I’m always floored by, is when people who are such successful talents like Craven, inspire others around him. “He was just so kind. Taught me to believe in myself a bit more. I’ll be forever appreciative of that.” Indeed the entire genre really lost an incredible filmmaker. Bressack adds, “It wasn’t my personal loss, but the entire horror community lost a brilliant mind.”

Unlike any other era in history, cameras have become the #1 mode of capturing every moment of our lives. We Instagram, YouTube, Tweet, Facebook, live stream ourselves as life unfolds. Of course I had to ask Bressack about his ground-breaking movie, To Jennifer, shot solely on his iPhone5.

After making his second movie, he thought job offers would start coming in; however this didn’t happen. One of the things that occurs in becoming recognized for your work, is that people want to know how did you do it? Every time Bressack was asked, he’d tell them to just go out and do it. Doesn’t matter how much money you have, just take a camera, film something and tell your story. Interestingly this was met by complaints about money, access to cameras and equipment, etc, etc… Finally, Bressack decided to not only talk the talk, but walk the walk! With only $500 in his budget, he gathered a few of his friends together, wrote out the story and then filmed it completely using an iPhone!

Using an iPhone 5 really worked for Bressack. “It makes due. Ultimately the movie I shot was meant to be shot on an iPhone. Part of the amazing world we live in, because cameras so accessible, if you have a camera you can be a director if you want to. The most important thing is the story”, he strongly advises.

Amazingly there is a sequel, 2 Jennifer, that was written and produced by Bressack and Hunter Johnson, who also serves as director. This marks his directorial debut. “It’s great to see that series is helping others as well, to get their bearings”, Bressack humbly adds.

Bressack is very down to earth and someone who I feel is this generations new “Wes Craven”. His passion, creativity and love of movies is evident in each of his films. He’s the type of person that really wants to touch people with his work and provide an escape from reality, if only for a couple hours. “I feel like as filmmakers, we have a duty to inspire other people to make films like I was inspired by the movies I watched to make them.” He quickly adds he’s always happy to chat with aspiring filmmakers or writers and will answer tweets. “Having been through the trenches many times now making a movie, I know how hard it is and anybody who makes something, puts it out there, I’m happy.”

As to his latest horror flick Pernicious, he sums it up, “It’s about “three girls go to Thailand, awaken an ancient evil and you’re in for a wild ride! It’s The Hostile meets The Ring. There’s some gory stuff and ghostly stuff. I’m excited to hear what people think.”

This horror movie will definitely keep you on your toes and I think is a great one to see with your friends, just in time for the Halloween season! Pernicious, stars Emmy-nominated Emily O’Brien (Young and the Restless), Ciara Hanna (Power Rangers) and Jackie Moore (100 Ghost Street), is “a carnival for the eyes” (Dread Central) and “sexy, bloody, and heinous” (Horror News). As with any good revenge-plotted flick, it keeps you on the edge of your seat, will make you cringe and though the gore isn’t for the faint of heart, fans of the genre will love it!

Be sure to watch this soon-to-be classic horror film, Pernicious, on DVD or via Digital HD September 29, 2015.