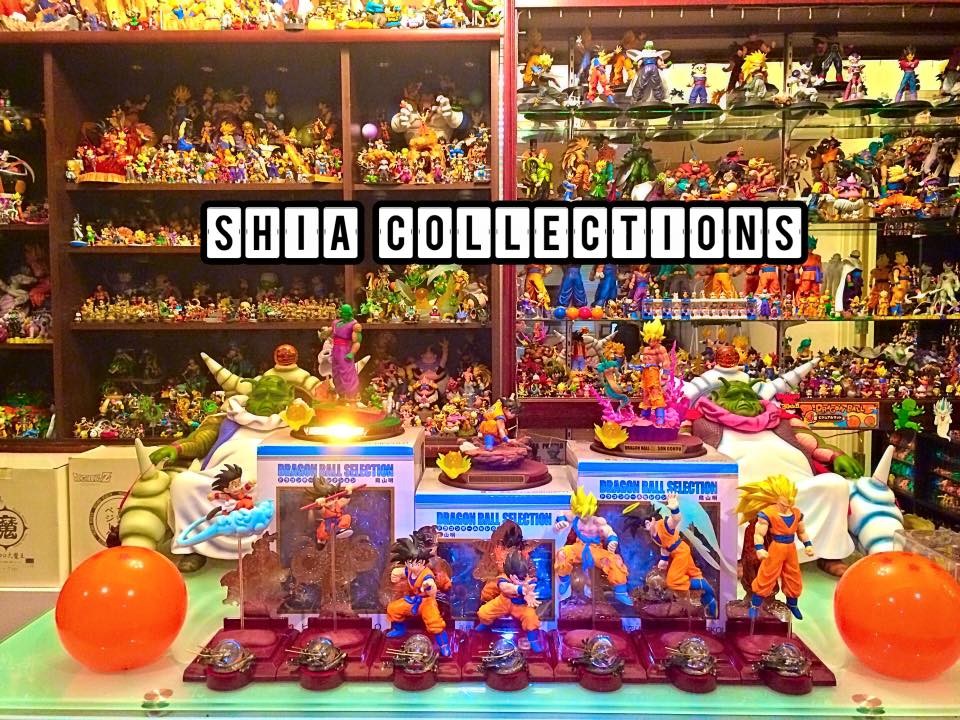 Deep in the heart of the Japanese island of Okinawa, nestled between the small towns of Kadena and Chatan, lies one of the country’s by-products from the last Great War. Kadena Air Base is controlled by the United States Air Force, home to around 20,000 American and Japanese servicemen and their families. But in the middle of the base’s rich history and decorated air defense team is a chamber of treasures hidden in a quiet military housing neighborhood. Although hidden, it is no secret place. Thousands know about this room through photographs on the Internet. It has become a shrine, not only to its owner, but also to the many fans around the world. Oddly enough, the owner has yet to name this room.

“Never really thought of a name for it. Just made it up on the spot while answering,” said Richie Shia. “Any suggestions?”

“How about that room where the Saiyans went to train,” I said (Seriously, this is not the time to go blank). “One year inside the room is equivalent to one day outside.” 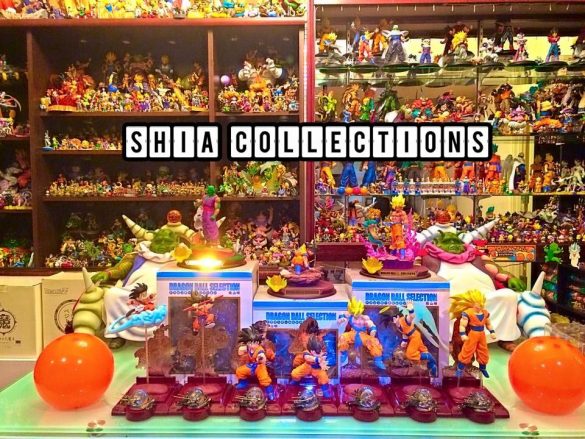 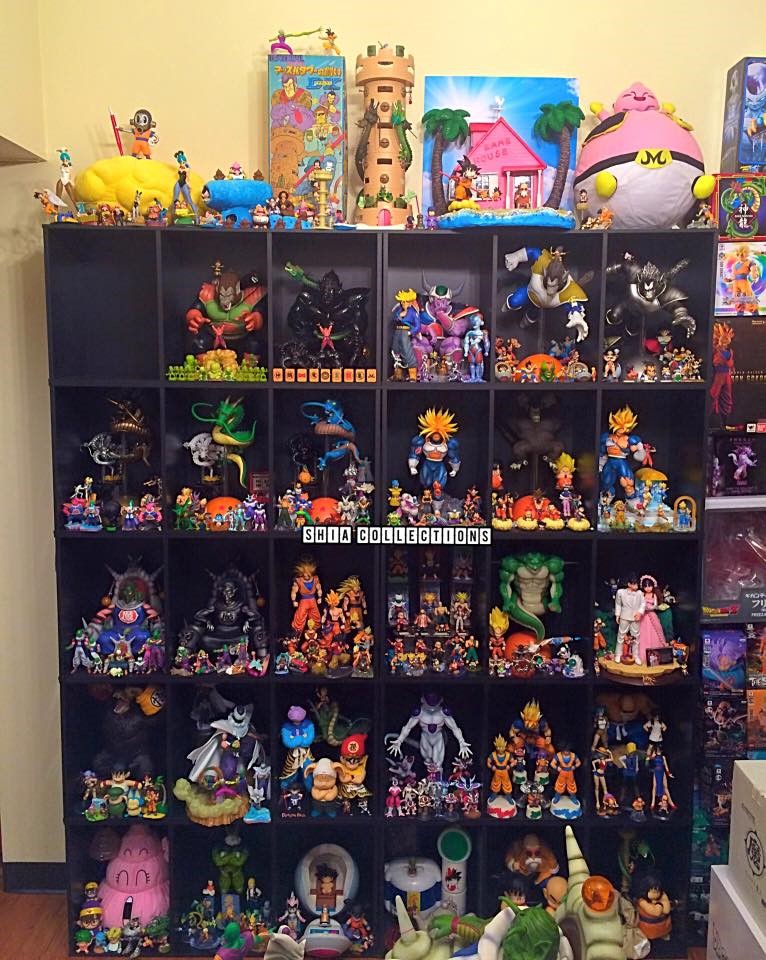 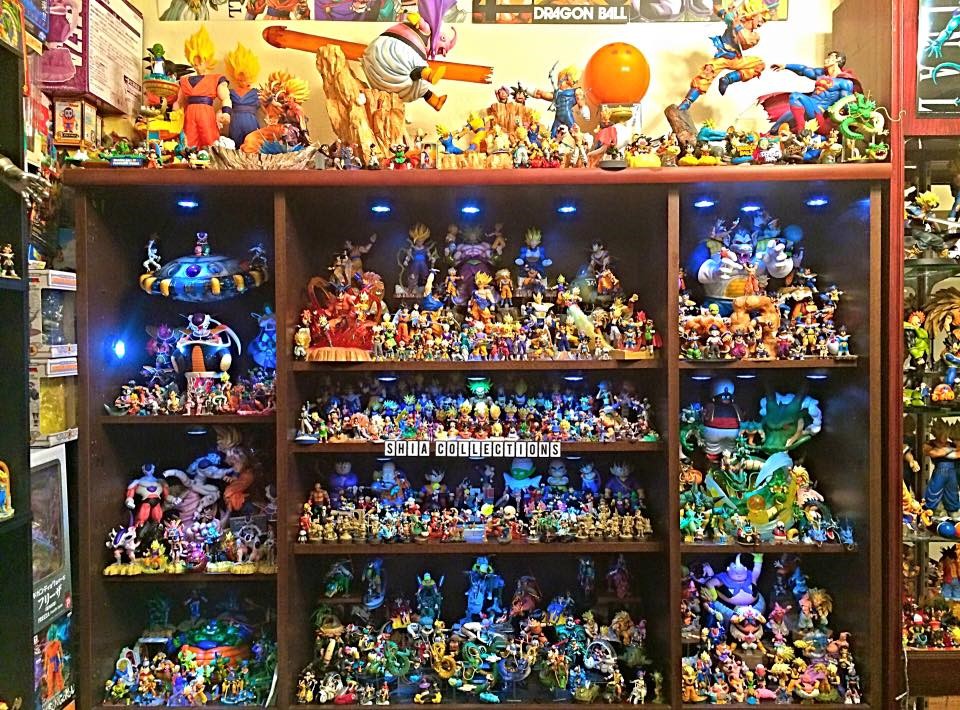 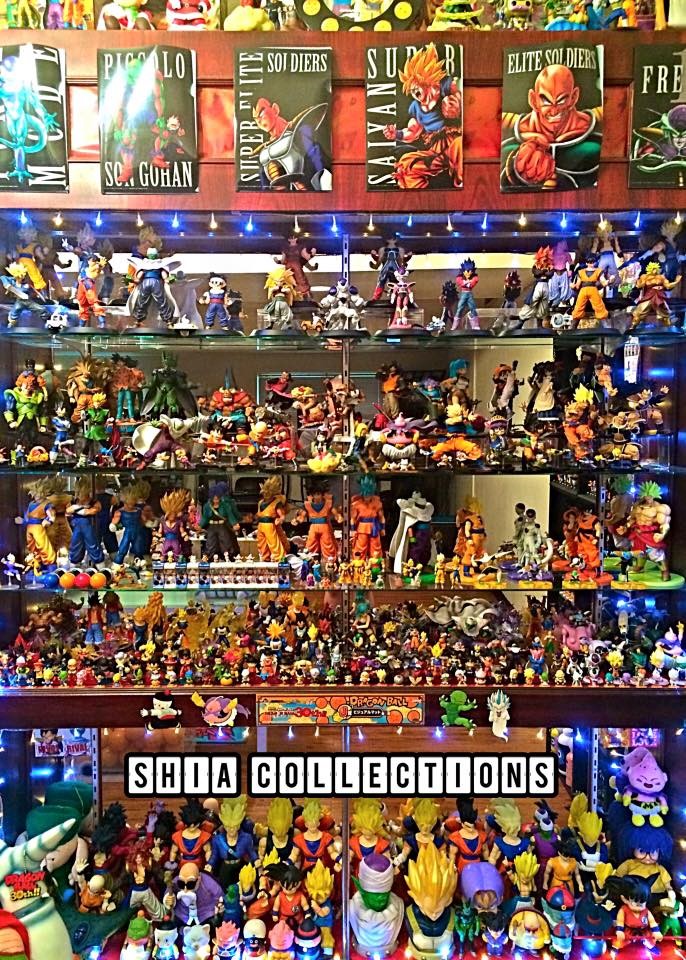 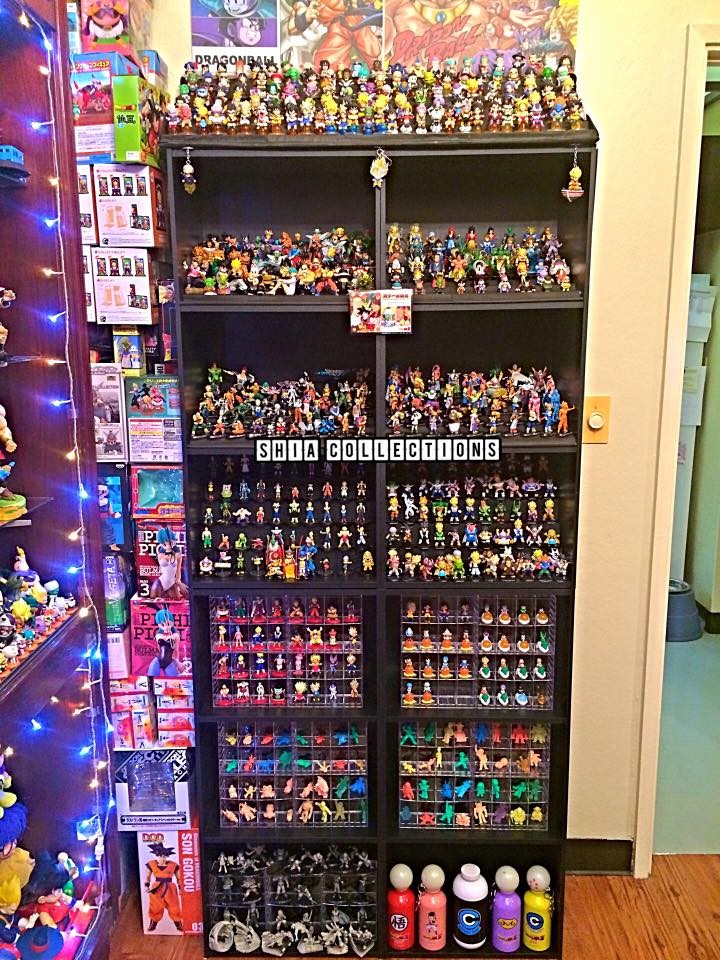 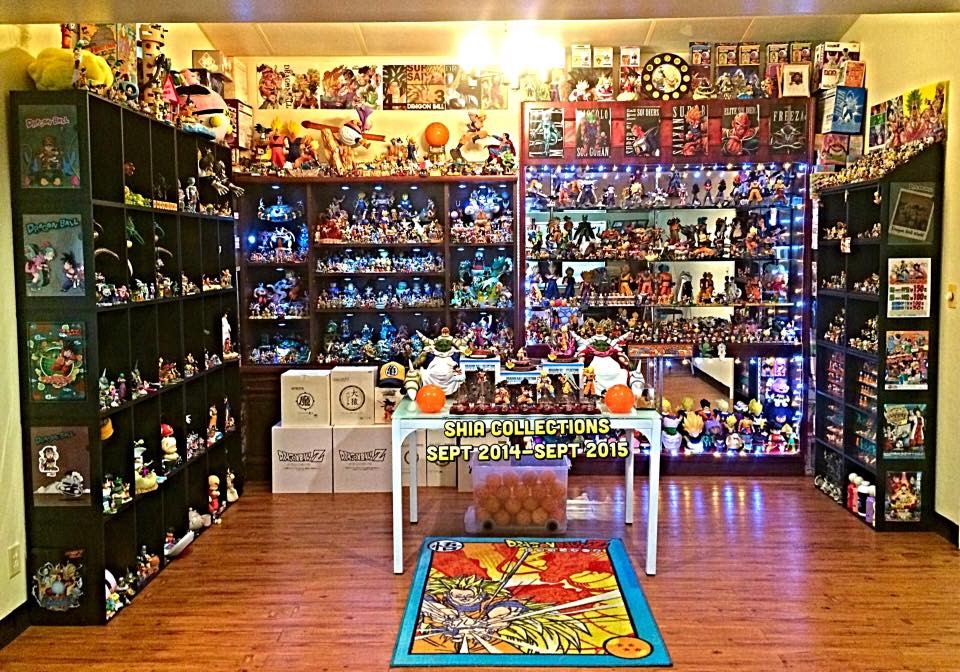 Toys. Not just toys. But lots and lots and lots of toys. And this is where the legendary tales of Richie Shia begins. Maybe “legendary” is a little too extreme to use, but one look at The Hyperbolic Time Chamber, one will find a hard time looking for the proper descriptive word while gasping at the immeasurable size of his Dragon Ball collection. Immeasurable. Maybe because Richie didn’t bother to count when he started collecting, and it has gotten to the point that it’s impossible to start and finish counting.

“Ever since I started, I never counted how many pieces I owned,” said Richie. “It never crossed my mind.”

Even when discussing the out-of-pocket figures, Richie could not give an exact number of how much he has spent on his collection. But living in Japan has been a huge discount for him; especially since eBay prices are nearly double or triple than the local stores. In his most recent trip to Tokyo, two-hour flight from Kadena, he said he spent close to $4,000 to add in his collection. Here’s his blog so you can see more.  In total, he’s guesstimating between $12,000 to $15,000 for a collection that now has a $30,000 value. That’s close to 4,000,000 Japanese Yen. You can buy a car with that amount, or a decent down payment for a house. All that money in the family dining room.

“It’s actually my dining room within the house. We have an open concept household, which contains one big room,” explains Richie. “So even with the utilization of the dining room, we still have additional room for an actual dining table. The dining room connects right into the living room.”

Speaking of living conditions, other than the possibility of an earthquake, Godzilla attacks, or Saiyan invasions, military lifestyle does have some disadvantages. Richie is not afraid if ever he gets assigned somewhere else that will require him to move out of his house. Like a true collector, he looks forward to packing his collection, embracing and remembering where he bought each item. Until then, there are a few lucky friends and co-workers who have stepped into The DB Room (yeah we started with this plain and simple name earlier).

“Amazed! All are fans from their childhood. It was definitely a blast from the past,” Richie said of those who had the chance to see his collection. “Even to non-collectors and non-DBZ fans, they are impressed by the sheer sight of it, I’ve noticed.”

Coming from a military background, his family had their share of moving around the world. He has resided in New Jersey, South Carolina, Philippines, and Japan. Although late in the hunting game, Richie has been a fan of the Dragon Ball show since it’s original airing.

“My first exposure to Dragon Ball occurred during my first time around in Japan. I was maybe 7 years old. Everyday after school, I would attend one of the youth centers to entertain myself,” said now 28-year old Richie. “One day, they were playing a DBZ movie on the big screen. I don’t recall which movie it was, but I just remember seeing Super Saiyan Goku doing his thing. It was simply amazing!”

Officially, Richie is not the record holder for the biggest Dragon Ball collection in the world, only because there is no such record. No one has bothered to count, not even Richie, and Guinness will not be knocking on his door any time soon. But within the collecting community, there is a united voice that will support the claim that the title belongs to Richie. Ever the humble type, he would prefer having “one of the biggest collection” rather than claiming the title to himself. If ever the day comes that an “official record” is awarded, there is an almost-guaranteed chance that it will be first announced and featured in the DBZ Collectors United, the biggest social media group of its kind with over 6,000 members in Facebook. Open to the public, the highly-active group features members  from all over the world showcasing their collections, discussing the hobby and show itself, and simply associating with thousand others who shares a common interest. As the creator of the group, Richie is always encouraging others to show their collection no matter what the size is. At the same time, spreading and promoting the show and the collection hobby involved.

But probably the most amazing fact about Richie’s collection is not it’s size, it’s not the vivid eye-candy, it’s not the serenity of its location. Nope. It’s the fact that he barely started this collection last year.

“I knew about it as soon as I landed in Japan of August 2014. Prior to our arrival, I told myself I would 110% fully dedicate to DBZ collecting. Research about figure, network, haul as much as I can,” said Richie. “Within the year, I have fortunately run into many great collectors, who are now I can call close friends.”

A little over the span of a year, Richie has amassed a collection some would take a lifetime to accomplish. From the smallest action figure to the most detailed statue and everything in between, his collection includes items only a handful have heard of or seen. There’s the Zeem Black & Arlia Versions of Vegeta Oozaru vs. Goku, his most expensive and rarest item at only 20 and 50 pieces each known to exist in the whole world. There’s the 1986 DX Battle of Muscle Tower by Epoch which is the item he is most proud of claiming most collectors have no clue of its existence.

Richie has a story for every item he purchased; so don’t get him started with one because he has a couple more to tell. But there’s only one toy that started it all. The cherry-popper that paved the way to the rest of his collection.

“The first big piece I bought was SCultures 3 Goku,” Richie explains. “At the time, it was the one piece that caught my eye almost immediately. I had never seen Goku wear that outfit before. I instantly bought it. No hesitation!”

Although he has in possession some of the rarest DB-related item, he is still in the hunt for some hard-to-find goodies that has eluded him. Having one of the biggest collections doesn’t mean he has no plans to keep going. To keep growing. To make it even harder for whoever Guinness assigns to count his collection to make the record official. The following are items he is currently hunting for:

(Don’t worry, if you are an average fan like me, then I’m sure you have no idea what he’s looking for)

For every thought of the future, one must keep his feet firmed on his past. And since day one, no one person has supported his addiction more than his loving wife, Mae. Besides being the only other living creature in the house from the thousands of lifeless plastic and resin, Mae gives Richie unquestionable moral support, she has also helped with the shelves and custom made displays. Richie said she is always a big part in assisting.

And on September 18th 2015, the man known for his “Shia Hauls,” Richie hauled his most prized possession ever. That’s when he found out that Mae is pregnant with their first child and is due in, coincidentally, May of next year. Though it’s still too early to identify the sex of their child, one thing certain is that having new responsibilities will not affect his hobby.

“Will your son or daughter’s name be DB-related?” I asked.

“I don’t think my wife would approve,” he answered. “We are still discussing names.”

If it’s anything like naming his collection-filled room, everyone can rest-assure that he will make the best decision.

“By the way, about the name. SHIA’S LOOKOUT. I want to incorporate some uniqueness into it,” said Richie. “Not just a name from the show, if that makes sense. I think I wanna stick with SHIA’S LOOKOUT. I really like that one.”

In the meantime, here’s a 12-minute tour of The DB Room aka The Hyperbolic Chamber aka SHIA’S LOOKOUT

‘The X-Files’: Exclusive Two-Part Trailer To Air During ‘Gotham’ and ‘Minority Report’

Ever wonder what happened to the closet-nerd jock that used to bully you? He’s now your local internet troll harassing you.