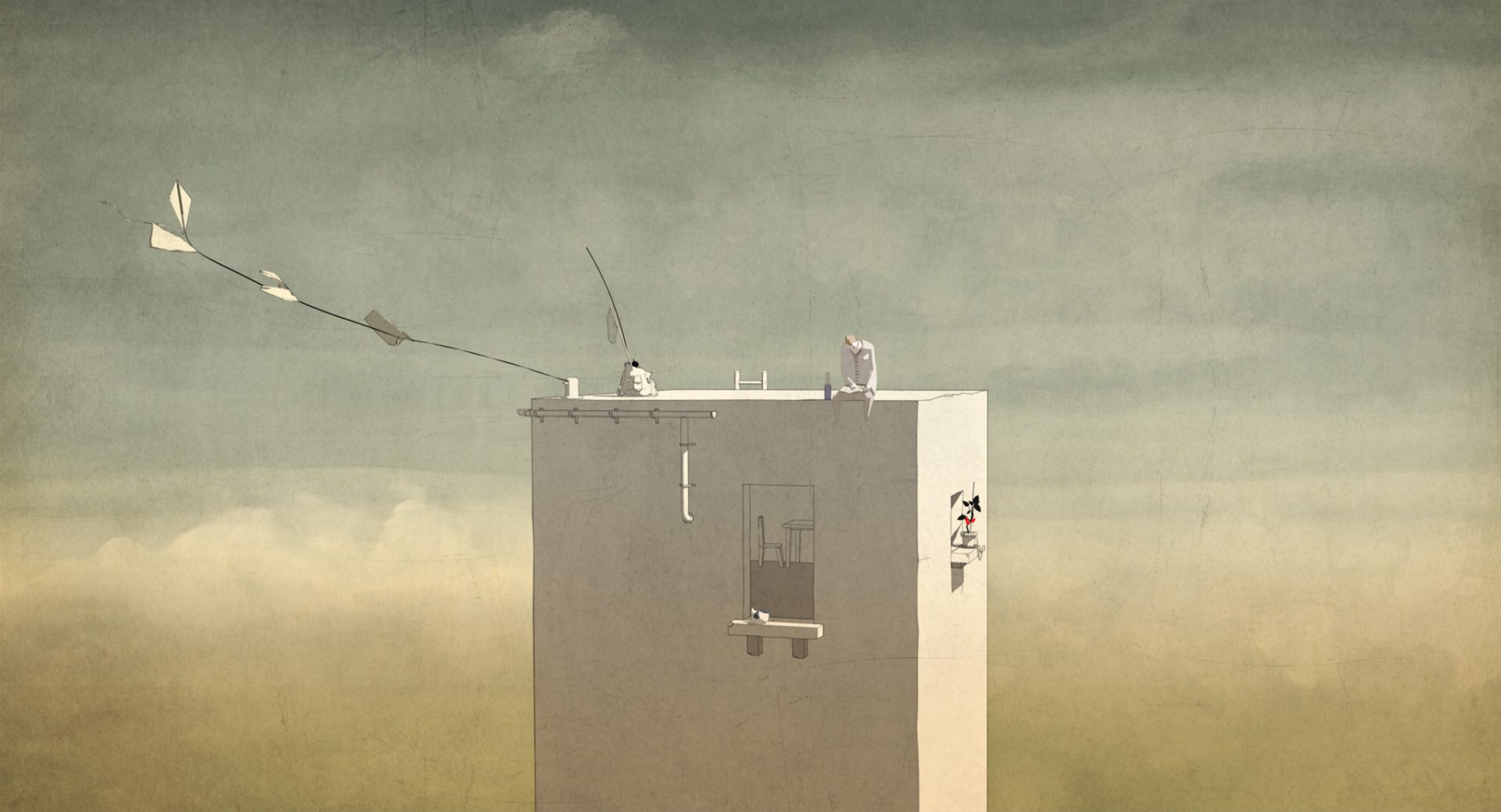 Animator Florian Grolig has slowly been building up a resume of award-winning animated shorts, from 2007’s “Weiss”—which won “Best Animation” at the Monterrey International Film Festival, among other awards—to his latest work, “In The Distance” (2015), which recently won the First Prize in the International Competition at the Animasyros 8.0 Festival in Greece.

Grolig, who co-founded Black Pants Game Studio and was a game designer, graduated from the School of Arts and Design in Kassel, Germany, and currently lives in Berlin. In addition to his own animated work, he has had commissioned pieces, including working on the final portion of a showroom trailer for the Mini Clubman car, as well as a pilot for an animated feature written and directed by one of his favorite animators, Phil Mulloy (http://www.philmulloy.com), whom Grolig characterized as having a “brutal animation style.”

“In The Distance,” is a beautifully animated short, recently screened at the San Diego Film Festival and will be seen at Interfilm, the International Short Film Festival in Berlin, in November 2015. In the short, a man lives high above the clouds with his pet chicken. His days of calm are interspersed with what sounds like thunder that soon proves to be something much worse and explains why he left society on the ground. The film was made with 3D computer animation but looks hand-drawn; its muted color scheme adds to the stark reality of the man’s existence.

Grolig, who is affable in conversation, recently spoke to The Nerd Element via Skype from his home in Berlin:

The Nerd Element (TNE): When did you start in animation?

TNE: Who are your influences and what is your favorite animation style?

FG: I have influences, but it’s not so easy for me to understand who they are. I mean, there are many animation directors I like; I like their work and then somehow, it influences me a bit.

Two animation directors I really like are Phil Mulloy, he’s British, and the second one is Igor Kovalyov [http://www.igorkovalyov.com]; he’s a Russian animator. It’s both clearly grown-up animation. It’s very weird as well. I cannot do that kind of film, but I would love to.

Concerning style, I really don’t have preferences. I deeply believe that each story and each approach has its perfect style, and sometimes the style is enough for a movie as well…. Some movies have to be puppet animation, so they should be done in puppet animation. I started with 3D animation and it’s a technique I’m fond of. There is no right or wrong technique, but it should fit the story.

TNE: What was it like doing “Mirrorland” with Phil Mulloy?

FG: Interesting. Trying to transform the very unique design into 3D was challenging and partly satisfying, though I am not sure we always succeeded. I guess it’s always good to work with someone whose work you really like. It helps to understand that even the famous and big figures of animation are just normal people, doubting and struggling while trying to make their visions come true.

TNE: What inspired the story of “In The Distance”? Could you describe the steps you took from your inspiration to the finished film?

FG: I simply started with a setting, and I wanted to have a really simplistic setting so I could do the movie with a very small team. That was my plan, but it didn’t work out, of course; you usually take much longer with animation.

I was basically collecting small episodes because I was starting from the setting, not so much from the story. I remember thinking it could be a small web series of mini-clips or something; I was collecting stuff that could happen to him in this house and then I decided it has to be a film and that’s not enough, I need a bit of drama and kind of structure.

I was thinking of reasons why someone can decide to leave the world behind and…the story came when I was trying to figure out what I wanted to tell in this specific setting.

For example, I had to look for a reason why he actually lives in the house so I can figure out a story, and that’s when the war stuff came in, quite accidentally…. Why would a person actually decide to go up there? I wanted to have it abstract, but not completely without any sense. So I decided, ok, war might be a reason to run away from the world and then the rest came step by step.

TNE: How long did it take to complete?

FG: It’s always difficult to understand how long the production works if you do it on the side, like time by time, not full-time. So from the end of 2012 to 2015—three years. The end of 2012 was the first time when I started transforming the simple notes and sketches I had for what would become “In The Distance” into a real story. In between, I did a lot of freelance work, so it was on and off.

TNE: Where did you get your crew? Are they people who you’re friends with, or you’ve worked with before, or went to school with?

FG: It’s all people I know from my studies. Like my sound designers, I’ve worked with them since I started my university time. The guy who animated the whole movie with me is a friend of mine who I used to study animation with; he had just finished his study and he was willing to come to Berlin for one-and-a-half months and do the animation for some payment. [laughter]

TNE: How many frames did you have to draw to fill up one second of film?

TNE: It is? It looks hand-drawn!

TNE: So how long does it take to render, say, one second of animation?

TNE: In your studies, did you do hand-drawn and other types of animation, or you just concentrated on computer?

FG: I started with hand-drawn animation and then switched to 3D. [Kassel is] a very open university and you basically trained to be directors. It was not very technically focused, so technical stuff we had to learn by ourselves. There were no limitations—you have to try a lot of techniques. Of course, teachers would like if you do so, but they wouldn’t force you. So I did a bit of hand-drawn animation and then at some point, started with computer and stuck with it.

TNE: I noticed you work a lot with black and white in your other films, giving them a stark quality. What draws you to use that palette when you’re animating?

FG: In animation, you’ll always start from nothing, step by step adding what is necessary for the specific film. And, in my opinion, not more than that. Most of my films simply didn’t need color to work. The same goes for the music.

On the other hand, I probably was impressed by black and white work early in my life, though I can’t recall specific films. I am a tiny bit color-blind as well.

TNE: You mentioned that you studied to be a director of animation. Why did you choose that career path? Also, when did you first know you wanted to work in the field of animation?

FG: I had seen some animated films that impressed me, classics such as “Balance”* and “The Nightmare Before Christmas,”** as a child, so I knew I liked animation. I started my studies wanting to do animation or maybe live-action film and ended in animation by accident; there was no teacher for illustration at that time and live-action seemed to be too much social work (big team, dealing with actors, etc.).

TNE: Anything else you’d like our readers to know about you or your work?  Also, where can they see “In The Distance” and your other animation?

FG: I have a homepage—it’s a bit old, I should update it—but it’s http://www.panopticum.eu/, and I have a Vimeo channel. That’s pretty much it. And then iPhone games—if they want to support me, they can find my latest iPhone game. [laughter]

TNE: What iPhone games did you do?

FG: I used to do game design for a few years, but the only big game I was responsible for was—I’m not with the company anymore and now do some in my spare time as a friend—we only did one, it’s called “Sisyphos”***. It’s an anti-game; you push a rock up a hill.

It’s not a fun game, and no one bought it, so I was thinking maybe it’s time to advertise it.  On my home page and on the Vimeo channel, you can see all of my old films. “In The Distance” will probably be online somewhere next spring, [as] there are still some festivals [where it will play].

* 1989 animated short by Wolfgang and Christoph Lauenstein
** 1993 animated feature by Henry Selick
***In Greek mythology, Sisyphus was a king who angered the gods and was condemned to roll a boulder up a hill, only for it to roll back down. He had to repeat the action forever.

For more about Florian Grolig and to view his animated short films and iPhone games, please go to: