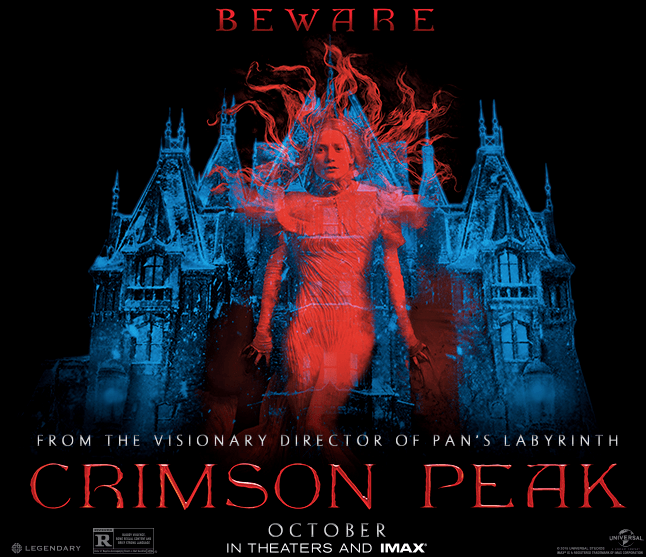 Crimson Peak tells the tale of aspiring New York author Edith Cushing (Mia Wasikowska) who is haunted by ghosts of her past. Edith is charmed by a mysterious stranger, Thomas Sharpe (Tom Hiddleston) who is hiding a deadly secret together with his sister Lucille (Jessica Chastain). The Sharpe’s live at Allerdale Hall in England, known as Crimson Peak due to the red clay ground seeping up through the snow. Crimson Peak is written and directed by Guillermo del Toro.

Early on in the movie, Edith points out that the manuscript she is trying to get published is not a ghost story it’s a story with ghosts. It’s an important distinction and one that applies to Crimson Peak. This is not a horror film; it is primarily a Gothic romance that just happens to have some ghosts in it. I don’t feel the trailers for Crimson Peak accurately portray the tone of the film; they’ve chosen to highlight the snippets of horror that are actually few and far between. I went into this expecting a darker film and consequently was quite disappointed as Gothic romance is not my favourite genre by a long shot.

The film takes a long time to get the characters to Crimson Peak. The opening of the film, set in New York, is tedious. The mystery surrounding the Sharpe siblings is not constructed particularly well and the supporting characters are uninteresting. I wanted them to hurry up and get to Crimson Peak, that’s what you pay to see after all.

Mia Wasikowska, best known for Alice in Wonderland, has a wide eyed innocence that works for Edith but the character isn’t very interesting making it hard to root for her. There is no chemistry between Wasikowska and Hiddleston, a romance feature without a believable relationship doesn’t captivate the audience. Hiddleston does his best charming English gentleman routine, the character of Thomas Sharpe, much like Edith, is not memorable. They’re not well written characters, which is a major flaw given that the focus is on their budding romance. Charlie Hunnam has a supporting role as Alan McMichael, the childhood friend of Edith who is interested in being more than just a friend. It’s a rather clichéd and pointless role.

Jessica Chastain manages to elevate the material and make Lucille Sharpe the most watchable character in Crimson Peak. It is a role that could have easily been overplayed but Chastain controls the crazy and makes Lucille the star of the show. You don’t get nominated for two Oscars by chance.

Along with Chastain, the best parts of the film are the set and costume design. Visually the film is stunning throughout with Allerdale Hall in particular being perfectly designed. The photography of the interiors could have been more inventive to really showcase the house. The exteriors were however brilliantly shot, the crimson snow providing a great effect.

The visual effects used for the ghosts were impressive, sadly we didn’t see more of that. There were some awful transition effects straight out of PowerPoint that I did not understand the need for as well as some inconsistencies in the script that were distracting.

The film has a few moments intended to make you jump but a sense of menace is not achieved, which is fine if they are focusing on romance. However, the final section of Crimson Peak has a lot of violence. It doesn’t fit with the rest of the film at all and ends up being quite laughable. Crimson Peak is a mix of genres and doesn’t quite do any of them well. There is a surprising lack of innovation in del Toro’s script, perhaps I expect too much from the man.

If you go into Crimson Peak expecting a horror film you will be disappointed. However, if you know that it is mostly a romance with some darker elements you may enjoy it. It’s not perfectly executed but the biggest problem for me is that it wasn’t the film I expected it to be. It is not del Toro’s finest moment but he can’t just make Pan’s Labyrinth over and over again. Crimson Peak is visually stunning, its flaws however are too great to ignore. It’s a shame as with a more focused direction it could have been great.

TVTalk with The Nerd Element Ep 97: Arthur and OCD