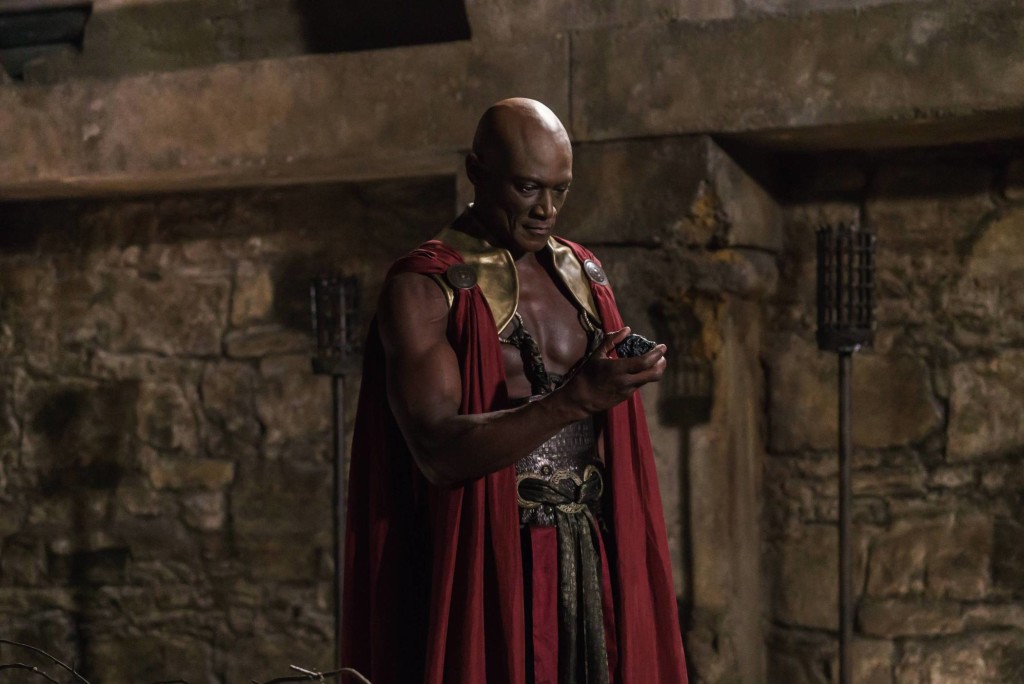 Sleepy Hollow will be getting another visitor called “The Hidden One.” We saw a very brief glimpse of him during Jenny’s dream in last week’s episode. In the next several episodes, we will learn more about this guy’s agenda.  It was a pleasure talking with actor Peter Mensah, who is playing this mysterious character. As a fan of the Starz Spartacus series, I’m really looking forward to him showing us his bad side!

To see where the Sleepy writers may be going with this story arc, I googled “The Hidden One” and found that his origins are Egyptian. The Egyptian God Amun is known as the “King of the Gods” and his name means “what is hidden.” If he’s considered the main God according to Egyptian mythology, how can he be completely evil, and why work against Team Witness?  This may be where the Sleepy writers will twist his origin. “You take a look at the basic elements of life: the ying and the yang and the push and pull. While the Hidden One might be powerful there are also powerful elements that balance out that state of being…. The Witnesses have been the balancing side of  life that the Hidden One knows so they are enemies, but perhaps together they also form the elements of life.” Mensah is getting me more curious by that statement.

So who is responsible for potentially waking up a God from a millennium nap with an axe to grind against Team Witness? Could it be Jenny, considering someone is after her soul?  “The Hidden one knows that she is a very special person and part of the secret to the Hidden One actually coming to life is revealed through Jenny,” Mensah reveals. Darn it Jenny, you just had to steal the shard!

Jenny’s character development since season 1 has leaned towards being more of a sidekick for Abbie and Ichabod.  This season I’m glad she has her own story arc with the shard.  As a descendant of witch Grace Dixon Jenny has used magic herself to help Abbie and Crane on a few occasions. According to Mensah, it appears we may be starting to see what she is capable of magically. “She has elements that date back to the Hidden One’s history so Jenny is quite powerful,” he said.

So while Jenny appears to be starting the process of “The Hidden One” coming to Sleepy Hollow, could Pandora finish it to wreak more havoc?  We don’t know where she went after the tree closed on her.  Mensah has hinted that he’s interacting with Shannyn Sossamon who is playing Pandora so could that be who she’s met?  We will have to see.

In the meantime, playing such a majestic character is not always easy, especially when eye prosthetics are used according to Mensah.  “It’s amazing what you go through and you have to maintain your poise as you’re blindly stumbling around… When Shannyn [Sossamon] and I are both in our regal robes walking up and down towards the tree and we’re tripping on our robes it’s anything but regal in the bloopers.”  While I’m sure that will not show in the final cut, fingers crossed it is in the blooper reel on the Season 3 DVD.

Since the show is about to start filming their 11th episode, Mensah is enjoying what each episode reveals about his character. “[The writers] haven’t revealed everything to me from the get go so I’m also discovering elements of “The Hidden One” and its history at the same time as the audience does. That sort of thing is always interesting as an actor because you get to be creative but you also have to be quick on your feet to adapt to the developing history as you create.”

Well here is one plus to working on the show: “I get to work with Shannyn, that’s awesome!” From our discussion I’m glad the cast camaraderie includes Mensah.  “Tom [Mison] is such a great person to be around! The actors are actually probably some of the nicest easiest going people I’ve been around in a show in a long while.”

“Fantasy roles are always exciting but in this particular case I think the show has been so fantastic in bringing fantasy and sort of everyday reality together.”Mensah seems to fit right into the supernatural element to the show.  I’m really looking forward to what the writers have in store for us with this story arc!

What do you think will be revealed during this story arc? Will Jenny be able to save her soul from “The Hidden One?”  Sound off in the comments below!  We will be live tweeting from @TNE_TVTalkPod every week during the East Coast airing so let’s get #SleepyHollow trending.

Doctor Who: The Witch’s Familiar aka CLARA LIVES! (and I guess Missy too or whatever)