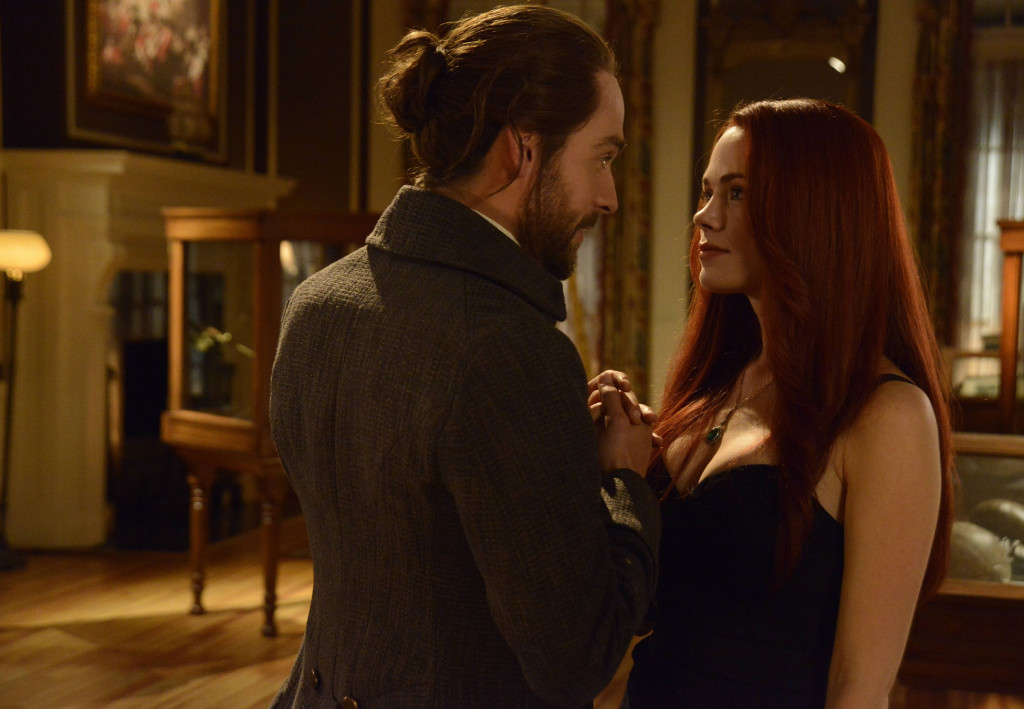 Katrina and Ichabod go on a sleuthing date in this week’s episode of Sleepy Hollow.

The episode starts with art restorer Grant Hollister (Aaron Serotsky) cleaning a painting featuring an artist painting an upside down cross.  The picture starts pouring blood from different sections after Hollister touches it with his finger. Yep this isn’t a creepy painting at all.

Ichabod is getting ready for a hot date with Mrs. Crane. They are going to an event hosted by the historical society featuring items from the John Adams’ household. Abbie is stuck going into the precinct.  Ichabod feels this would be a good way to see how his relationship with Katrina could bloom in a modern setting. Katrina was good friends with Abigail Adams (Michelle Trachtenberg) according to Crane especially since she was midwife for all of the children born.  Crane dressed old fashioned while Katrina comes out in a knee length black dress (I’m noticing she wears black alot, is that a witch thing?). Ichabod’s initial reaction was awe and appreciation of course.  Abbie helps Ichabod finish up dressing then leaves for the precinct. 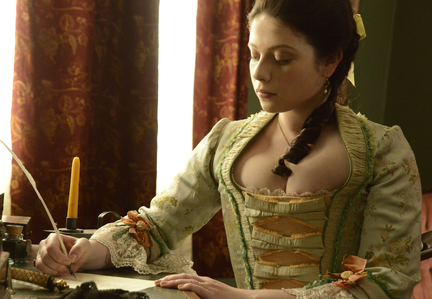 The couple are initially viewing the painting, which is of artist James Colby.  Katrina doesn’t recall seeing the painting before from her visits to the house.  However, she does remember Abigail’s desk from her frequent visits. Crane and Katrina show public affection which Ichabod explains is quite normal.  Hollister tries to talk to Crane about ghosts when one of the historical society members interrupts to mention the cracks in the frame of the painting. As the society member is touching the painting Katrina gets a sense of an evil presence. She tells Crane, who informs her of Grant’s suspicions.  Ichabod wants them both to be on guard.  While the group is being served courses Katrina gets flashbacks of Abigail congratulating her on her pregnancy.  Katrina thinks that she is remembering for a reason.  At the same time, Hollister gets killed.  One of the waitresses find him in the room hanging upside down from the chandelier under a pool of blood. Sheriff Reyes is on the scene to conduct the investigation.  She is surprised to learn about Katrina.  She plays it cool though by explaining to Sheriff Reyes they  reunited after a separation as the reason she hasn’t been mentioned before now. Katrina notes to Ichabod that the police would not understand what happened to Hollister.

Katrina has a flashback of seeing a tarot card of the hanging man which is similiar to how Hollister’s body is displayed.  The tarot card means suspension and rebirth.  Both Ichabod and Katrina recall similar cases in 1781 called the Durham killings.  Katrina got specifics from Abigail.  We then flashback to Abigail explaining the murders and wanting justice for the victims. Mrs. Adams theorized that maybe a surgeon was doing the killings based on how the neck was cut.  Ichabod thinks that Katrina’s memories that are surfacing will help them find the killer, who Katrina thinks was never caught back then.

Back from the Dead

Meanwhile at the precinct, Abbie is reading her family journal when there is a disturbance in the hall.  When she investigates with other officers, she is shocked to see Frank Irving alive.  He’s turned himself in, why? Abbie and Crane catch up on each other’s activities, Abbie trying to deal with Irving while Crane tries to investigate Hollister’s death.  Abbie defies Sheriff Reyes orders and talks with Irving.  He doesn’t remember his battle with the knight and dying.  Abbie had to tell him what happened and her concern that he still does not have his soul.  She also wonders if he will be used by Henry like Andy Brooks was by Moloch.  His ex-wife and daughter, Cynthia and Macy, were told that he died.  Irving thinks that Cynthia will know that it is really him instead of a controlled soul so he wants to see her.  With regret Abbie tells him no and leaves him in the interrogation room. 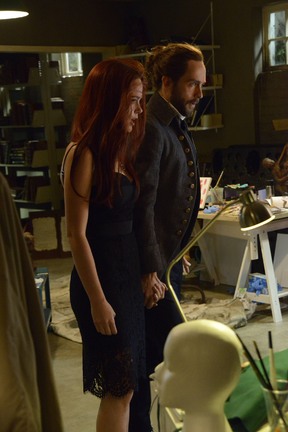 Katrina and Ichabod go back to the last place they saw Hollister which was by the painting. They both notice that there is a blade that is in the painting that wasn’t there before.  When Ichabod touches it his fingers have fresh blood on them.  When Ichabod says out loud that the killer could be hiding in the painting, the artist is turned around when initially the back of his head was shown.  Creepy! It was like Colby was giving them the look like “why are you trying to ruin my plans man!” Katrina notes that the picture may serve as a doorway somehow into this world. Since Hollister had paint on his hands him touching it started to unfold the curse. Upon further reflection they realize that Colby is trying to complete the hangman ritual.  Since he is not done, there will be another victim.  Katrina and Ichabod figure out that the historical society member Miller that berated Hollister earlier is next. Those that touch the painting are in danger of being victims.  Crane goes to find Miller and attempts to detain him while Katrina stays by the painting.  Miller does admit that both he and Grant heard a voice calling for blood from the picture.  Katrina goes towards Abigail’s desk again and finds papers hidden in a special compartment.  She then sees Colby with blood all over him walking around the house with the blade.  She goes to follow him.  Crane tries to get Miller to leave but he gets kidnapped into the painting by Colby. Katrina maybe instead of following Colby you should’ve stayed where you were, which was by the picture!

In the meantime, Jenny is brought up to speed about Irving.  She wants to remain positive that Irving is still on their side.  Abbie cautions that they have to prepare for the worst, which means getting a weapon that could kill him again if necessary.  Jenny calls Hawley for suggestions.  He recommends some platinum bullets that Jenny winds up finding on a dead man.  She has to grossly take them out then gets almost choked by said body when trying to remove the last bullet.  She has to keep the bullet in there which would’ve been nice to know Hawley! Now that they have the bullets the Mills sisters hope they don’t have to use them.  Abbie shows Cynthia the video feed showing that Irving is alive.  She wants to see him but Abbie tells her no because they don’t know his motives yet. Apparently Cynthia is aware of the contract Irving signed with Henry.  It would really be nice to know when she was told that.  Jenny does manage to see Irving in the hallway when she gets back.  She suggests that they ask Katrina to give Irving a supernatural exam to see if he still has a soul.  Abbie scoffs because Katrina has undermined the group several times already. Jenny agrees that Katrina has been more hindrance than help but she’s better than nothing.  Abbie tries to update Crane but doesn’t get an answer.

Back to the serial killing artist, Katrina recites a spell that gets both of them into the painting to rescue Miller, who they see is hanging upside down bleeding to death.  Before they go in they realize that the frame is surrounded by runes which was a spell used to try to lock Colby in the painting. The spell was done by Reverend Knapp (Patrick Gorman)  from Katrina’s coven.  So nice to see you again bud, even if it is in a flashback!  From the papers Katrina found, Abigail set up a trap for Colby so the Reverend could recite the spell to imprison him in the painting.  Kudos to Abigail for figuring out the killer.  Apparently Katrina’s spell didn’t land them directly in the same room as Colby so they had to search for him in a twisted version of his house. This part seemed to drag unnecessarily.  I really didn’t care why Colby was crazy.  Although I did like the subtle changes from black and white to color while they were searching.  They find Miller barely alive and Katrina hurries to get them back.  Colby has completed the ritual and was coming out of the pool of blood looking creepy. Ichabod and Katrina make it back but fail to destroy the painting before Colby gets out of it.  Abbie comes to the rescue when she shoots Colby then the painting.  Her excuse, Crane wasn’t answering his phone. 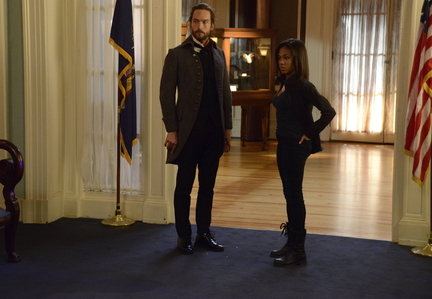 Fortunately Miller is going to make it.  Sheriff Reyes berates Abbie for not following orders regarding Irving.  Crane was glad she came in the nick of time. He talks with Katrina about starting fresh again on their marriage which makes her happy.  Back at the precinct Abbie apologizes for not obeying Sheriff Reyes’ order. There is new evidence that could free Irving, so Reyes understands why Abbie would have stayed loyal to him.  How convenient. This makes it harder to believe that Irving is not a pawn.

I think this was a better episode for Katrina.  It was nice for her to not be completely helpless even if Abbie had to save the day like several episodes ago.  At least Katrina wasn’t knocked out like last time.  It was also good to see Katrina and Ichabod work on their relationship.  While the show should focus mostly on the witnesses, Ichabod is a married man and Katrina in her own way still plays a role even if it has been ambiguous given the trust issues.  We need to see that relationship.

What did you think of the episode? Is Katrina still useless to you? Given the recent EW article that interviewed Fox execs about where the show is going, what direction do you want the show to go in?  It looks like there will be a Hawley centric episode next week.  Sound off below in the comments!

Gotham S1 Ep 12 Recap: What the Little Birdie Told Him