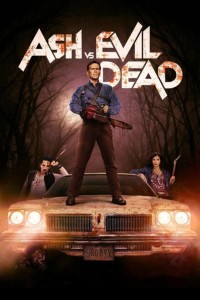 Previously, on Ash Vs. Evil Dead: Ash (Bruce Campbell) accidentally unleashed the Evil Dead again. Ash, Pablo (Ray Santiago), and Kelly (Dana DeLorenzo) finally reach Books From Beyond, where Agent Fisher (Jill Marie Jones) is there speaking to the store owner, Lionel Hawkins (Kelson Henderson). Ash decides to summon a “weak” demon from the Necronomicon. The demon, Eligos (Ben Fransham), wreaks havoc, killing Hawkins. Kelly smacks Eligos with the Necronomicon and he disappears—or does he? Meanwhile, the mystery woman Ruby (Lucy Lawless) is on Ash’s trail, and Ash leaves Fisher handcuffed in the store, where Hawkins resurrects as a Deadite.

“Brujo” gives us a new director in David Frazee, who’s also known for his cinematography, and it shows in the look of the episode, which has heightened colors and surreal images thanks to a trip Ash takes. Frazee delivers the best episode since the pilot—okay, we’re only four in, but still, it was freakin’ great! Like Michael J. Bassett, director of episodes 2 and 3, Frazee has Raimi’s Deadite point-of-view style down cold. Coupled with a great script from James E. Eagan, “Brujo” delivers everything an Evil Dead fan could want. Let’s dive in to what happened this week (note: this recap is a little longer than normal because I really want to get into Ash’s head-trip):

“Brujo” opens with Fisher in peril from Deadite Hawkins as he attacks. He’s stopped by Ruby, who impales him against the wall. Fisher asks, “Who the hell are you?” and Ruby responds, “I’m your new best friend.” I can’t wait to see this couple in action.

Meanwhile, the Ghostbeaters are headed to see Pablo’s uncle, the brujo. Kelly is in the backseat of the Delta feeling ill. She vomits out the window with Ash supportively asking her to make sure she projects so as not to damage the car’s clear coat. He’s all heart. Kelly responds with a “Drive, Miss Daisy,” to which Ash counters, “Yes, sir!”

As the Ghostbeaters travel, we get the Deadite point-of-view as an unknown demon stalks them (Ash refers to it as a “drafter”). The Delta starts acting up as the Deadite’s force takes over, locking the doors. For the first time, we see that the Drafters travel in an angry cloud of dust (kind of like the Smoke Monster from “Lost,” but dirtier). The cloud is like a wall, as a car that the Delta is almost forced to collide with hits the cloud and flips up in the air.

Ash tells Pablo to hit the car’s nitro button. The Delta, however, doesn’t do well as a nitro-burning funny car and starts breaking down. Fortunately, the trio makes it to see the Brujo (played by Hemky Madera; also, Brujo is used as a formal name for the most part, so we’ll do likewise). The Drafter cannot pass the gate to Brujo’s house because his property is protected by spiritual talismans.

Back to our new girl team: Ruby explains demonic possession, Kandarian-style, to Fisher. We also find out she’s Annie’s (from Evil Dead II) sister and she’s after Ash, who she believes killed her mom, dad, and Annie out of malice and not self-defense, it seems. Deadite Hawkins tells Ruby, “We know who you are” and Ruby beheads him before he can say more. Fisher is suitably freaked.

Back at Brujo’s, Pablo explains his belief that Ash is a jefe, to which Ash says, “When evil shows up, it blows up—I’m actually still working on the slogan.” In the background, Kelly still has a headache and is now hearing voices. Remember last week when she defeated Eligos and we saw wisps of smoke around her head? Yeah, I knew that was a big problem. Pablo takes her to the trailer to get some aspirin.

Brujo tells Ash he is weak, old and slow. Also, a dolt. However, he will help the un-self-aware Ash by giving him a powerful hallucinogen, Ayahuasca (also spelled iowaska by some). This particular iteration is made with mashed-up worms. Yum!

In the trailer, Pablo wants to build Ash a new hand since he lost his rosewood hand to Fisher. At the bookstore, Ruby shows Fisher Ash’s old, real hand, which has recently started moving around, as if it wants to go back to Ash. Yes! I mean, this won’t turn out well. Fisher is totally grossed out.

Back with Brujo, Ash drinks the potion and nothing happens. He asks for more. He even asks for some of the “rooty-toot-toot” Brujo is smoking. Brujo continues chanting, “Buena buena medicina, buena buena luz divina” until Ash finally starts trippin’ balls in the best sequence of the show to date, giving us better insight into Ash’s frame of mind.

The montage of images stops when Ash finds himself being buried alive and surrounded by creatures, some of whom are wearing his signature blue shirt outfit (which I’m taking as an oblique reference to Army of Darkness’s Evil Ash and Tiny Ashes). Ash can’t see them, though, because his eyes are sewn shut. Funkadelic’s “Free Your Mind And Your Ass Will Follow,” which is also used in the end credits, plays in the background. The lyric “The kingdom of heaven is within” has particular resonance, as Ash has been told the answer to banishing the Deadites lies within himself, and has also been told by Brujo to look within. He is able to remove the stitches and take control of his trip, winding up on a pier overlooking the ocean and a city in the distance.

Ash then finds out that his spiritual center is Jacksonville, Florida, which is where he had intended to take Linda before he wound up going on the cabin trip instead. The word “Jacksonville” appears in clouds in the sky, and Beach Boys-esque music plays (yeah, that’s more Californian, but this is Ash’s head we’re in). Ash has both his hands back, and naturally asks for two beers. His bearded dragon, Eli, appears and starts talking to him. The beers are replaced with the Necronomicon, and Eli tells Ash he has to bury the book “deep, deep below where your journey began.” The cabin, perhaps?

Back in the trailer, Pablo wants to add a screwdriver and a laser pointer to the hand he is making for Ash—it’ll be the Swiss Army Knife of prosthetic hands. Kelly suggests adding a mechanism for applying hair dye. Both Pablo and Kelly make fun of Ash’s bad dye job, but Kelly doesn’t feel well and goes into another room, where she faints. When she comes to and looks in the mirror, her eyes turn totally black and reflected back at her is Eligos! Kelligos goes back to where Pablo is and gives him a massive electric shock.

In Ash’s drug-induced dream, he’s still talking to Eli. Kelligos goes to Brujo and says, as Kelly, that Pablo needs help. Kelligos then attacks Ash the same way as last ep, burrowing into his mind. In the trip, Ash sees Jacksonville go dark and the words “Surrender Ash” appear in the sky (no Wicked Witch is flying by, sadly). Kelligos’ attack sends Dream-Ash back to the cabin, where Eligos appears as himself. Ash then sees his own head in a jar—like the critters back at Books From Beyond—then is falling back to the stockroom at Value Stop on top of boxes of the dolls that had attacked him before, one of whom comes to life and taunts him.

Eli tells Ash he can control his own dream, and he does. He squashes the head of the evil doll, sending one eye flying toward the audience, where it hits the screen and bounces off (hahaha!). He then starts repelling Eligos with his mind, but in real life, he’s strangling a normal-looking Kelly. Ash looks possessed as he’s choking the life out of Kelly with one hand. Brujo and Pablo come rushing in to help her, and Pablo knocks Ash out. We see the three of them looking at Ash’s unconscious form, and Kelly looks fine, except she’s not—she’s Kelligos still as her eyes turn black. Cut to credits! NOOOO!!!

We didn’t get a whole lot of Ruby and Fisher, but we got enough to see that Ruby doesn’t exactly tell the truth (unless she doesn’t actually know it), and Fisher is plenty freaked out by what’s happening, but seems to accept her new reality. Mostly, we see how truly sad Ash’s life has been the past 30 years and possibly why he’s become such a misogynistic loser (remember: in this universe, Army of Darkness didn’t happen.  Well, it did, but it can’t be referenced directly, so…). The specific bits of ED II we saw in Ash’s trip within were completely focused on Linda, and her death—coupled with his decision to take her to the cabin instead of Jacksonville—suggest some deep-seated guilt he’s never worked out. Will he this season? Well, I kind of hope not because we need some story left for the already-ordered Season Two, but you know, eventually. I’m loving our booze-drinking, joint-smokin’ dolt as he is. It is nice to see, however, that there’s more going on inside Ash’s brain than scoring. 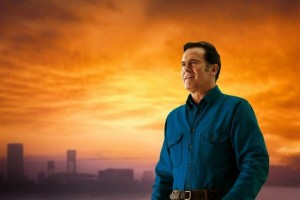 “I know that I summoned something very bad, and I’m looking to undo whatever I done did.”

“I’ve always wanted to spend time in a city so nice, they named it…Jacksonville!”

“Um, just don’t mention the stuff I do in the trailer when we’re there alone.”

I’m calling Pablo as our official Car Music Man. At least, Ash keeps asking him to turn on the radio when they get in the car.

PLAY FAIR – “A Celebration of Play & Entertainment for All Ages”