Previously on Ash Vs. Evil Dead, Ruby (Lucy Lawless) became Agent Fisher’s (Jill Marie Jones) best friend and revealed she was using Ash’s (Bruce Campbell) hand from ED II to track him. Kelly (Dana DeLorenzo) was possessed by Eligos (Ben Fransham) and had to be exorcised by Brujo (Hemky Madera), who was killed by Eligos, who in turn was killed by Ash. Ash, Pablo (Ray Santiago), and Kelly burned Brujo’s body on a pyre and headed off.

After being sidelined (and bound and gagged) last episode, Ash comes back to the fore in “The Killer of Killers,” a cracking, gory episode directed by Michael Hurst (who was Hercules’ sidekick, Iolaus, in Hercules: The Legendary Journeys). Hurst has a dynamic style that matches the material provided by episode writer Nate Crocker. The episode moves so rapidly that it was hard to believe nearly 30 minutes had passed when it was over. Add in a lot of practical effects and terrific one-liners, and the series continues to fire on all cylinders.

Well, except for one thing: Not a lot of Lucy Lawless yet. Though Ruby and Fisher finally show up at Brujo’s (just missing Ash and the gang by a hair), we don’t get Ruby for long, but we do get more tantalizing clues as to who she really is. Ruby directs Fisher to look around outside while she checks for Ash inside. She sees Brujo’s various talismans and statues, and speaks Spanish to one dressed in Día de los Muertos garb.

While the two search the premises, the Deadite Force converges on Brujo’s place and animates Brujo’s burning skeleton, who comes after Ruby. Deadite Brujo calls Ruby a “double-crosser” and says she will never get the Necronomicon for herself. Say what now? Before we learn more, though, Brujo and Ruby go tumbling into the still-burning funeral pyre and are gone. Fisher, who could do little more than shoot at Brujo and stand around, gets in Ruby’s car and discovers Ash’s hand is missing. She heads off in search of Ash.

The Ghostbeaters, meanwhile, have arrived at Western Moose diner for a much-needed repast. Ash is wolfing down his meal like he’s never eaten before, realizing they need to go back to the cabin. Well, he does; he doesn’t want to endanger Pablo and Kelly, so he tells them to stay put, showing the character growth from his ayahuasca visions has stuck. They refuse to abandon him. A guy named Lem (Peter Feeney) comes to say hello to Ash, insulting him by asking if Pablo and Kelly are Ash’s grandkids. They appear to be friends. Wait–Ash has friends!?

Fisher pulls up and watches them through binoculars. While Ash goes to chat with Lem, Pablo tells Kelly about the botched Kelligos seduction. He wants to know if it was coming from her or the demon, but Ash returns to the table before she can answer. Outside, Fisher calls her boss, Lt. Boyle (Andrew Grainger), tells him she’s found Ash, and asks him to come make the arrest. He heads to the diner, as does the Deadite Force.

Pablo and Kelly go back to the trailer while Ash settles the bill. In a mirror scene from the previous episode, they sit in same spot where she tried to seduce him, only this time, they are sitting far apart. Kelly moves a little closer and asks what happened; Pablo tells her about the shotgun bong and she thinks it’s awesome. Kelly tells Pablo she sees him as innocent and pure, which is not what he wants hear. Just then, Pablo’s necklace starts moving and noise emanates from the trunk where Ash stores the Necronomicon. Pablo and Kelly open the container and the book attacks the necklace, trying to suck the necklace into its mouth. The two fend off the book, which lands open to a page we’ve seen before.

Ash tries hitting on the waitress, Nancy (Rachael Blampied), as his way of settling the check. His lovemaking is worth at least double the $22.89 bill, he tells her. She points out her husband is the cook, who’s chopping something with a machete, but this doesn’t deter Ash. Man kills Deadites for a living, after all.

Pablo wants to destroy the book, but Kelly says no. He thinks she wants revenge on the Deadites for the possession by Eligos and relays something his Brujo told her: “Beware anger, fear revenge.” Will Kelly take it to heart? Probably not.

Ash goes to the bathroom to freshen up before his hoped-for encounter with Nancy, and Fisher pops in to arrest him, all while some poor kid is in one of the stalls and Alice Cooper’s “Be My Lover” plays. Fisher gets the upper hand while Ash gets a good look at her cleavage, making yet another inappropriate pass at her. Good ol’ Ash: One step forward in maturity with Pablo and Kelly, then two breasts back. Alas! Anyway, Boyle shows up finally. Lem watches, while outside, the Deadite Force is barreling toward the diner. Glasses and such start shaking and Ash knows what’s coming. The Force bursts into the diner, killing everyone except Fisher, Ash, Lem, and the kid in the bathroom, in very gory ways.

Both Nancy and Boyle get possessed by Deadites and go on one of the harshest, bloodiest, and punniest (“A new member for my fan club!”) attacks of the series. Lem manages to run off, while Pablo and Kelly show up in time with Ash’s chainsaw and boomstick. Pablo tosses the chainsaw and boomstick to Ash, who has enough time to remove his new hand so the chainsaw can land and hook onto Ash’s stump. I love a good chainsaw toss! We also get Pablo sliding across the floor on his back with a gun, shooting at Nancy, like a bona fide action star. Ash shoots off Boyle’s head and quips to Fisher, “I told you I kill killers,” while peaking over the gore. It’s a nicely framed shot. Most of the attack is scored to a fantastic song called “Freakin Out” by punk progenitors Death (hailing from Michigan, natch), and it’s marvelous.

Kelly’s bloodlust for Deadites comes out when she uses a deli slicer on Nancy’s face and then bashes the rest of Nancy’s head to a soft pulp with a meat tenderizer. She’s righteously pissed off (and punning away while she’s at it). Ash and Pablo look on with mixed feelings of apparent admiration and disgust.

Meanwhile, Lem, who’s running through the Deadite’s favorite territory (i.e., the woods), stops and calls a guy named Crosby for help. The Deadite Force gets him the old-fashioned way—racing up to him as he screams in terror.

Back at the diner, Ash invites Fisher to come with them as he simultaneously hits on her. He has a brief moment where he sees her in soft focus, hair down and blowing in the wind, as she asks him to string her racquet. I’m not sure if it’s wishful thinking or an ayahuasca-induced momentary vision, but Fisher agrees to come along for some Deadite hunting as Styx’s “Renegade” begins blaring. They head to the Delta and leave Ruby’s sweet ride behind.

It’s nice to see Ash making strides towards being the more sensitive guy we first met in The Evil Dead, while still retaining his wise-ass persona from Army of Darkness. It’s what makes watching him fun, after all—okay, that and all the magnificently disgusting killing of Deadites. His chemistry with Pablo and Kelly, and now Fisher, continues to grow as we get to see more sides of everyone else, except of course for Ruby, who remains mysterious in more ways than she first showed. Also nice to see that each director and writer chosen so far retains the lively spirit of the pilot while putting their own stamps on the story. More than halfway through the season and the series remains a terrific kick in the pants. I can’t wait to see what the rest of the story brings us! 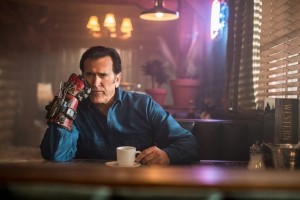 Pablo: “Ash, if I was a Deadite, I would be honored to have you chop my head off.”

“You know, they say waitresses don’t get big tips? Well, that’s about to change!”

“Welcome to my world. You walk into a diner. All you want is a pile of hotcakes. What do you get? A pile of corpses, and everybody wants to blame it on you.”

“What you never saw a guy with a chainsaw hand before?”

The screwdriver in the Swiss Army Knife of a hand Pablo made for Ash sure came in, um, handy for that big Deadite fight.

Ash crushing orange breath mints in water and using the concoction to freshen up in anticipation of his “date” with Nancy? Priceless!

And because I can’t get enough of this song, here’s “Freakin Out”: