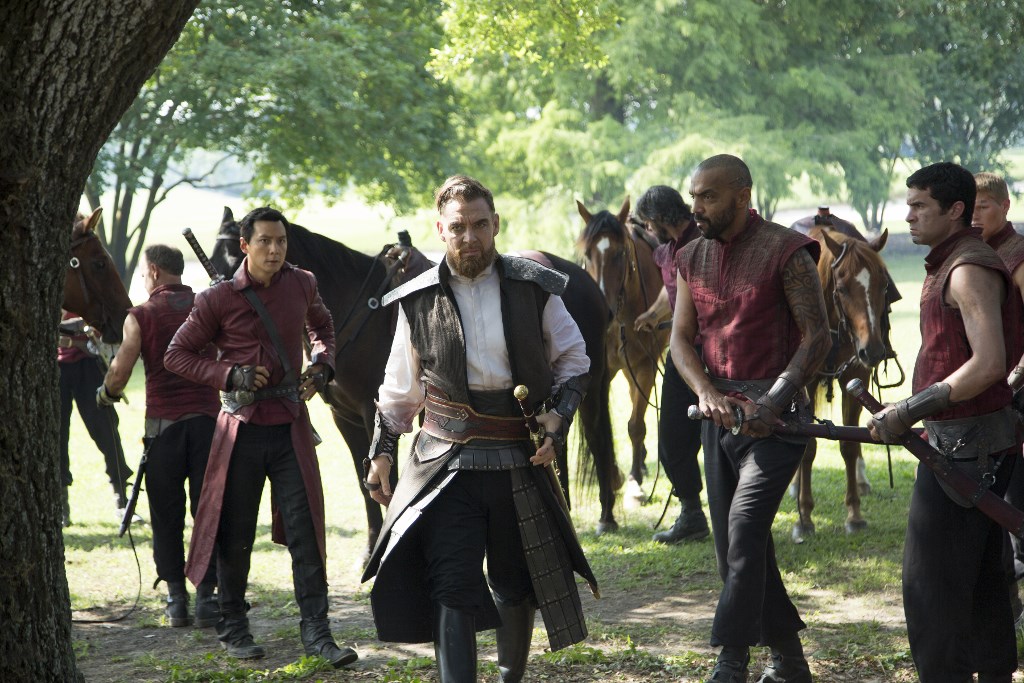 Someone actually manages to go toe toe against Sunny in this latest episode of “Into the Badlands.” On to the recap!

Baron Quinn sends a force of clippers to the Widow’s house to take her out.  M.K. is on his first mission as a Colt so him and other boys are assigned as lookouts.  The Widow and her daughters manage to escape, but not before Quinn and The Widow go for Round 1.  Widow got lucky this round! If it wasn’t for the headache that came upon Quinn as he was about to do the death blow, Miss Widow would be dead. Then Sunny interrupted the Widow when she was about to deliver her final blow.  What was good about the beginning scenes is you are seeing how the Widow’s soldiers and her daughters fight as well as how Quinn and his clippers go to battle.  We also got to finally see Quinn fight.  Sorry but killing a defenseless doctor and his wife does not count.  Meanwhile, M.K. slipped on his first job as lookout when he sneaks away and goes to get the book on Azra. As he is in the room he sees Tilda escape with the rest of the girls. They share a look before she goes into a tunnel behind a bookshelf. 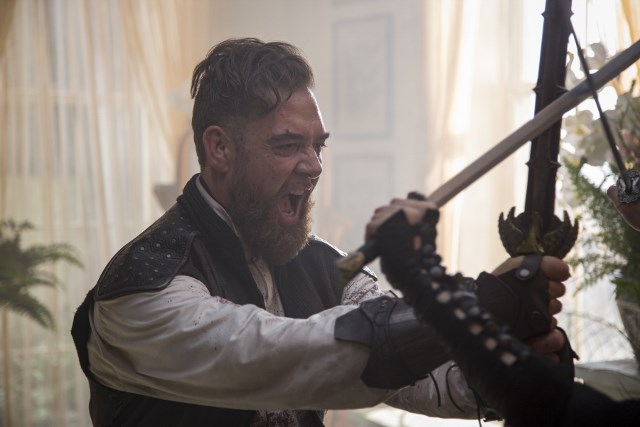 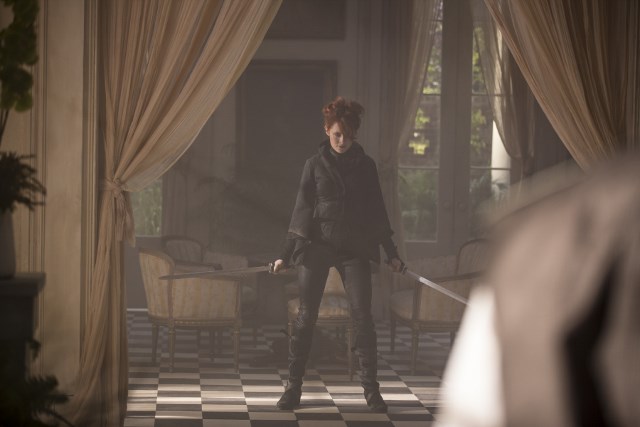 Ryder is still not awake after being hanged in last week’s episode.  Lydia holds vigil by Ryder’s beside along with Jade.  Lydia throws shade at Jade and wants her to leave, calling her a “distraction” for Quinn to “feed his ego.” Jade at least tries to be respectful even though I’m sure she wants to say something just as mean. A maid comes in with news that Quinn is back from the raid.  Lydia takes out her frustration out on Quinn too since the Widow got away.  Her gut is telling her something is wrong since Ryder is barely breathing and he is still not awake yet. Quinn and Lydia argue some more about the fact that now they are at war and it wasn’t too pretty last time they were in this position.  Quinn does bring up that he didn’t want to appear weak because of Ryder’s actions. Lydia sort of has the last word when she mentions that they could call the doc but oh yeah, he’s dead.  To mess with Lydia some more, he goes into his room where Jade is waiting and has sex with her as Lydia listens in Ryder’s room. 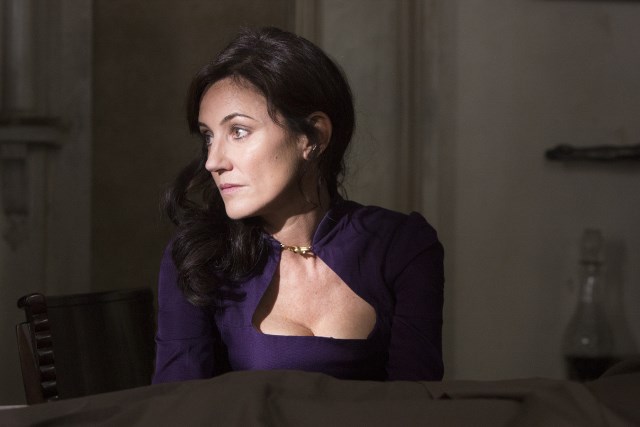 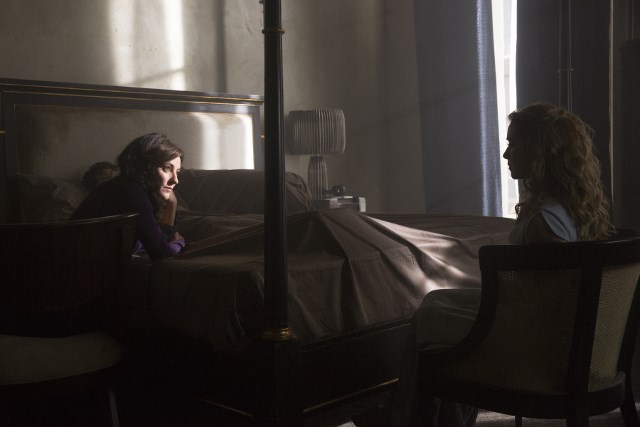 M.K. later gives the Azra book to Sunny. Fortunately Sunny was able to hide the book before anyone saw him.  M.K.’s training officially begins when Sunny first tries to get him to balance himself on the ledge above the Colt training grounds.  He is pushed off by Sunny when he thinks what he is doing is BS. Sunny then takes him to the gate overlooking the poppy fields.  M.K. wants Sunny to teach him how to fight so he can defend himself while trying to leave.  Sunny takes him to see Waldo (Stephen Lang) who proceeds to help Sunny teach the kid a lesson about appearances.  The deal, Sunny will teach M.K. how he wants if he lands a blow against Waldo. M.K. then proceeds to getting his butt whooped!  I know I learned don’t underestimate someone just because they are in a wheelchair. 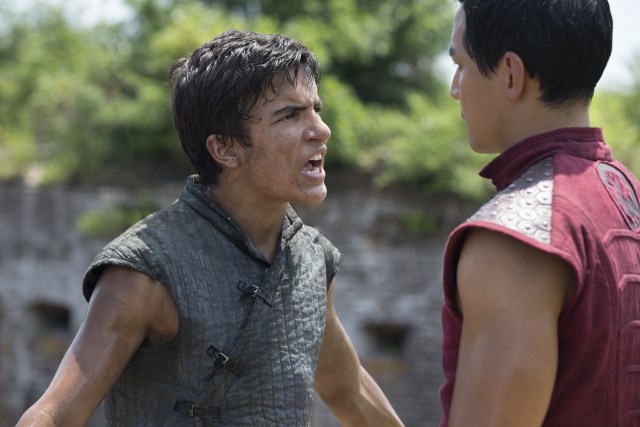 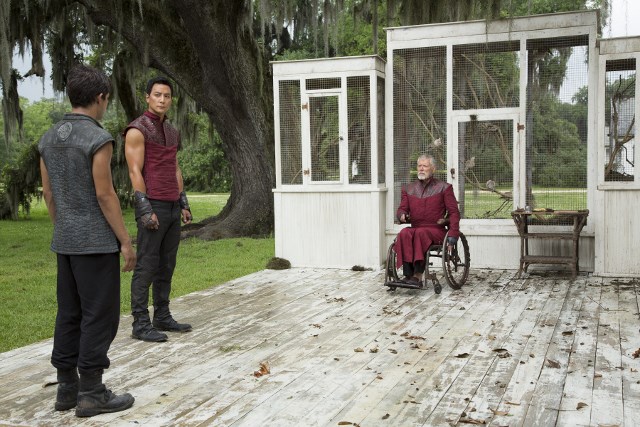 While Quinn is cuddling with Jade, she brings up that she wants to help get Ryder better. Quinn admits that he can’t see his son in bed ill. I guess he still has bad memories from before when something happened to Ryder when he was little.  I’m sorry but it was bugging me that Quinn, was still funky after almost dying by the Widow and now having had sex. Jade knows that Lydia won’t go for a cog doctor working on her son and that it was Jade’s idea.  Quinn is like Lydia would get over it if Jade is able to help his son.  So who does Jade want to help Ryder? None other than Veil whose parents were just killed by the Baron not too long ago. We learn that Jade and Veil grew up together so I guess Jade thought that Veil would just jump at the chance to help her out given their history.  On a side note, Jade was wearing the same outfit that I think she had sex in with Quinn, so I’m hoping she at least cleaned up before stopping by to see her friend.  Veil initially resists, but winds up going to the house anyway to help.  She figures out that Ryder has some swelling in the brain, and proceeds to crack his skull to relieve the pressure with a trepanation device.  Lydia initially freaks out but assists Veil with Jade in holding Ryder’s head while the procedure is done.  The Baron comes in just as Veil is cleaning up and leaving. He has the nerve to be all sympathetic about her parents and lies about trying to find the people that killed them.  He knows that Sunny has a relationship with her.  Quinn thanks her and wants to do something to repay her for her services.  Sorry but the way Quinn was talking to her was creeping me out.  Ryder wakes up just was Veil was trying to leave.  Quinn asks Ryder who set him up.

The Widow and her butterflies find sanctuary in an old dilapidated house. Tilda is assigned to fetch Angelica at the doll house because the Widow knows that Sunny will go after her.  First Sunny goes to see his friend Ringo (Yohance Myles) to see if he heard anything about the Widow’s whereabouts.  Ringo notices that Sunny hasn’t been by to add marks lately.  Sunny tells him that he no longer cares about keeping count anymore of his kills.  Sunny is back at the Baron’s house and is shocked to see Veil there.  She tells him that she had no choice and leaves.  Now that Sunny has been brought up to speed, Quinn wants Angelica alive so she could lead them to the Widow.

Loyal to the End

The Widow’s instincts were right, because Sunny did go after Angelica after Quinn questioned Ryder.  M.K. is tasked to try to block her exit from the 2nd floor.  M.K. thinks it would be better to try to cut off her escape from the ground floor.  Tilda comes around the same time and sees M.K. at watch.  She confronts him about trusting him and he tells her he was scared, so he lied.  She knows that her mom is just as bad as the Baron in wanting to use him. As they are arguing, Sunny tries to capture Angelica alive.  I have to give it to Angelica, she was able to land a good blow.  Unfortunately I have a feeling that she was only able to go toe to toe with Sunny because he wasn’t trying to kill her.  After a little high flying jumps across buildings Angelica sacrifices herself by jumping off the balcony so Sunny is not able to find the Widow.  Loyal to the end.  M.K. lets Tilda escape so she is not in Sunny’s clutches.  She reports to her mother about Angelica’s fate.  The Widow asks about the book M.K. now has, but Tilda tells her mother she didn’t notice it in the library as she was leaving.

Sunny goes to Veil to get stitched up.  M.K. figures out that she is the one Sunny wants to protect.  Sunny tells the boy to not touch anything while he gets fixed by Veil, but M.K. doesn’t listen and proceeds to touch a book that Veil is reading.  Veil learns that M.K. is Sunny’s Colt and the plan to leave is still on.  She teases that he’s good practice on what’s to come when M.K. interrupts and asks about making dolls and the ability to read.  She does warn Sunny that Quinn knows about them and that she has to keep going to the house until Ryder has recovered. Sunny regrets trying to save Ryder.

Before Lydia tells Ryder that she no longer supports him, we learn that he was kidnapped by nomads.  He came back on his own after being gone for 73 days. Lydia tended to his wounds, especially his foot when it was damaged.  At least we have an idea of why his foot looks jacked up.  She was really hoping that Ryder would be like his father, but he’s not.  His actions caused repercussions and she regrets defending him.  Lydia also now thinks that Ryder would not make a good Baron.  Ryder is understandably upset because he literally has none of his family’s support.  I felt bad for him for a little bit because that’s like a low blow when recovering from a head injury, even if he directly caused himself to get injured.

Baron Quinn and Sunny meet in his office.  Now that Quinn has taken over the Widow’s oil fields, the other Barons view him in violation of the Foundation treaty.  They want to parley but he knows that it’s a trap.  He wants to try to make an alliance with one that hates him less.  Sunny suggests Jacobee.  Quinn wants to be subtle and wants Sunny to meet with Zypher (Ellen Hollman) Jacobee’s regent since they have a history and rekindle their relationship.  Sunny reluctantly agrees.  Later that evening Sunny meets with Zypher. Zypher lays it out there that Quinn has been making all kinds of mistakes lately.  Even refusing to meet the other Barons in a parley is a mistake. She suggests that Sunny kill the Baron and everyone wins.  The other Barons would split the oil fields and acknowledge him.  Sunny of course is still loyal to Quinn. He tells her that Quinn wants to meet with Jacobee.  She wants to rekindle their romance so she could be more persuasive with Jacobee but Sunny doesn’t fall for it.  Zypher figures that Sunny’s is sweet on someone and believes he is naive, especially if Quinn finds about it.  She does agree though to ask Jacobee to meet with Quinn to discuss a potential alliance. Like both Zypher and Sunny, I am not holding my breath. They leave with Zypher’s offer to help Sunny in more ways than one still on the table and for him to seriously consider it. 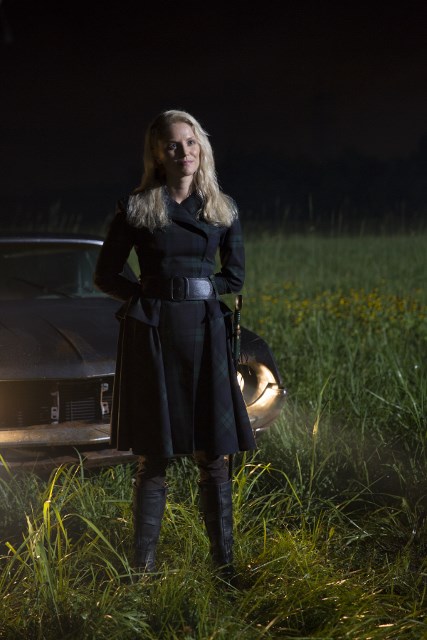 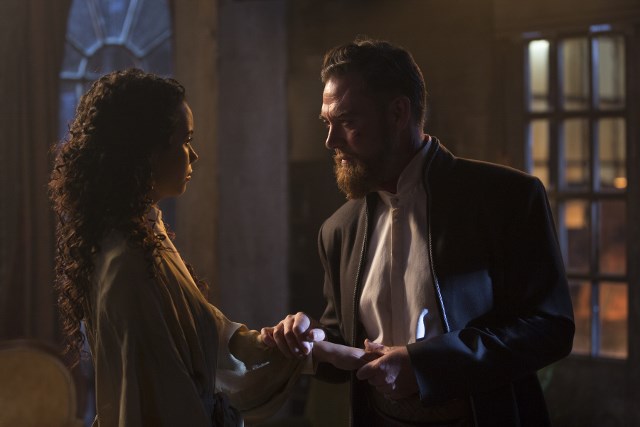 When Sunny leaves, M.K. sneaks into his room to get the book then goes to visit Veil. He tripped me out rolling up in there then proceeds to eat her food.  He’s hoping that she could read the book for him.  Unfortunately she doesn’t recognize the language it’s written in.  He hides when the Baron comes to see her.  He wants her to cure him of his tumor. Again, his approach is just creepy.  Hopefully M.K. can stay hidden long enough.

And that’s the end of the episode guys! I’m so glad Ellen Hollman is back on my TV screen again after the Spartacus series!  I’m looking forward to seeing her fight scenes!  Next week looks action packed!  What did you think of the episode? What is up with M.K. sneaking into the Baron’s house again? Do you think he is getting away with too much with Sunny? And now that we have been introduced to Zypher, do you think we will learn more about her history with Sunny? Sound off below in the comments!