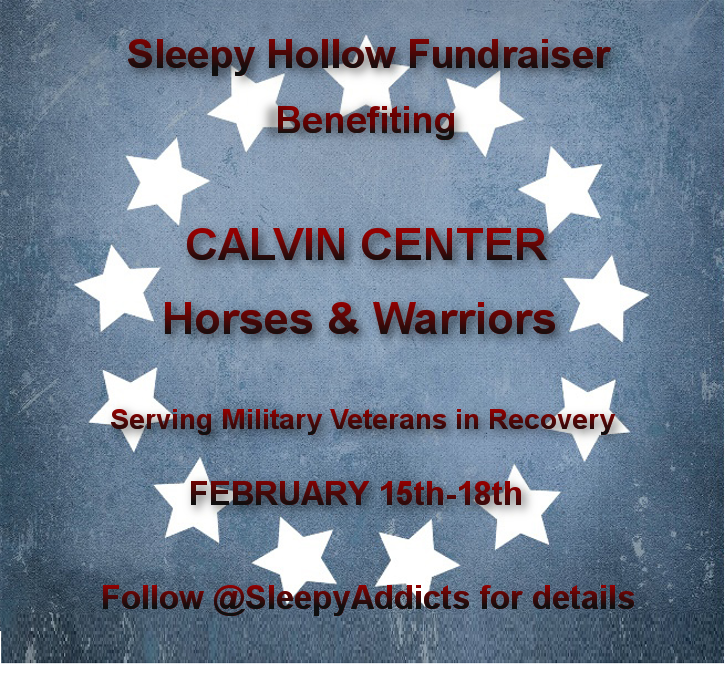 One of the things I love about Sleepy Hollow is the fact it’s grounded in the birth of our country. Our Founding Fathers have been reintroduced to us in an unique way, giving us the chance to learn more about what our troops went through during such an historic time in history. 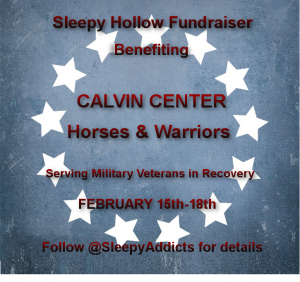 Today we have been slowly seeing things shift from how great men like George Washington, Benjamin Franklin, John Adams and others envisioned this country to be. Thousands of soldiers gave their lives so that we could build a truly free country, to stand on our own two feet.  A place where one could dare to dream without the threat of tyranny, be accepted no matter your ethnicity or religious beliefs. So many brave men and women continue to sacrifice their lives, giving up time with their families and friends to fight a cause they believe in- freedom.

This is the reason Timothy Perez (aka) “Jesus” feels so strongly about raising money for his charity, Calvin Center Horses & Warriors.

Perez appeared in Sleepy Hollow‘s first episode of Season 3, “I Witness” and definitely made an impact among the fandom. His now infamous C-Dawg exchange with Tom Mison’s Ichabod Crane, in my opinion, will be fondly remembered forever. 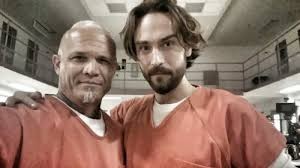 While Perez continues to pursue his love for acting, a disabled Veteran himself, he’s found a way to help others who have gone through similar experiences.

After learning more about the services that Calvin Center Horses & Warriors provide, he thought utilizing his horse farm would be a great asset and a natural fit.  This charity is near and dear to his heart on many levels.  He’s uniquely qualified having gone through his own ordeal and can ease the minds of the veterans he works with in the rehabilitation process.  As one of the horse leaders, it is his job to oversee the client as he/she learns to handle the horse, groom, etc… He also teaches how to communicate with “horse language” and saddle up. Once the client feels comfortable, the riding lessons begin.

So why do a fundraiser?  Perez hopes to off-set the costs that come with such a program. “There are so many expenses that go into running a horse farm/charity, such as veterinarian bills, medicines, supplements, feed and hay, horse riding and handling equipment, etc..”.  By doing this fundraiser, he hopes the organization can “spend that precious time with the wounded veterans instead of paying bills”.

Asked about a behind-the-scenes moment during filming of Sleepy Hollow, Perez describes the cell scene. “Tom had a rather long paragraph to say during the jail cell scene.  Well, right after Tom got done with his lines he said, “do you hear me Jesus”?, on probably the best take we had done, my elbow hit the light on the wall next to my bunk as I was starting to lean out and blew out the bulb making the cell go dark! I then said to Tom, “Oooopsie! I guess we get to hear that speech again, eh dude! He laughed.”

Perez isn’t the only actor from Sleepy Hollow with ties to service in the military.  Patrick Gorman (aka) Reverend Knapp, also served in the armed forces.  Though we’ve seen him throughout seasons one and two via flashbacks, Sleepyheads continue to yearn for more of Knapp’s background and his dealings with Sheriff August Corbin (Clancy Brown),

While his character’s history is somewhat shrouded in mystery, the actor himself has led a very interesting life.

Gorman caught the acting bug at the tender age of four when he was cast as Gepetto in a children’s production of Pinnochio. A born character man, he continued to perform in various plays and musicals until he and his cousins decided to join the Marines during the Korean War.

He ended up in the Navy Reserves while still pursuing his career. After performing with Judy Garland and stars like Sammy Davis, Jr. and Donald O’Connor, he chose to serve active duty during the Cold War in the Army.  Stationed in Germany he later stayed in Paris for six years after his discharge, honing his craft and playing in French film, theatre and television.

Since he understands the difficulty in transitioning after leaving the armed forces, Gorman uses his spare time to mentor veterans interested in acting.  He advises them and teaches how to express themselves by channeling into what they went through to enhance their performances. He offers his wisdom at no charge and feels like it’s his way of giving back,

Side note: One of his ancestors actually fought in the Revolutionary War, so it’s ironic that Gorman was cast in Sleepy Hollow.

If you watch Sleepy Hollow than you know Knapp had been guarding the skull of the Headless Horseman for at least 250 years.  Gorman says that when he read the script he found it fascinating, intriguing because there was nothing like it on television.  He recalls speaking with Executive Producer Roberto Orci about the role. Although Knapp is unceremoniously beheaded in the first episode, initially there was talk of possibly having more of his backstory told. While we’ve had bits and pieces Gorman would welcome the chance to do more and hopes that it will be revisited at some point.  Anything can happen in ‘The Hollow’!

He had nothing but great things to say about the cast and crew, who work so tirelessly, really caring about the outcome. Gorman describes that everyone involved in Sleepy Hollow are amazing to work with, and has successfully provided an encouraging creative environment.

Calvin Center Horses & Warriors is set to launch fittingly on George Washington’s birthday, Monday, February 15 for a 3-day event. Autographed items from actors in Sleepy Hollow will be posted on eBay, with 100% of the proceeds (minus shipping) going to the charity. Perez has donated the wristband he was wearing in the scene described above, as well as autographed photos.

Want to donate to the charity directly? Click here

Everyone Is A A Pretty Little Liars Podcast Episode 36: “Smiling Pile of Poo Emoji”