It’s been two weeks since the disastrous S3 finale of Sleepy Hollow when one of the Witnesses, yes Abbie once again, sacrificed herself as “hope”, entering Pandora’s Box.  Yes it’s true our Nikki Beharie wanted out, but I don’t understand why Ichabod couldn’t at least kiss Abbie before her huge sacrifice yet again? Would it have hurt anything M. Raven Metzner? I mean, Abbie is gone, the fandom is in mourning like I’ve never seen and it’s like they killed off Scully for God’s sake! I mean, The X-Files wouldn’t have been the phenomena it was without Scully, Mulder’s “better half”, right? We’ve already established Abbie is Ichabod’s “better half” in episode 8, “One Life” when he confesses to Sophie.  I don’t understand the logic in alienating most of the fandom for a show with plans for a season four?

Let’s talk about Ichabbie for a moment.  In my estimation, based on all the posts on the Sleepy Hollow FB page when asked should they put Ichabod and Abbie together, at least 75% in the fnadom wanted them together! So why keep them apart with no confession, no kiss, nothing? It honestly felt like an FU to the entire fandom and disrepected Nikki Beharie fans in one big swoop!  instead of infusing excitement over the hiatus, you have effectively caused a mass exodus! Sleepyheads once thrilled by the series thanks to the chemistry between Tom Mison and Nikki Beharie are dropping like flies.

This ensures a huge marketing nightmare upon its return. That is a statement of fact! All I know is that Tom Mison better be front and center, doing PR like oh, I don’t know, getting in front of the 18-40 demographic by guesting on Jimmy Fallon’s Tonight Show, Late Show w/Seth Meyers and Jimmy Kimmel! Showing up at Dragon Con, New York Comic Con and San Diego Comic Con. You can’t get by with no marketing in S4 and it will be like you are launching the pilot episode. Don’t skimp on the marketing please.

I know there are a bunch of us not going anywhere, like myself, because I love the show (though I know it’s hard to see that at this moment).

After last week’s betrayal, The Hidden One (Peter Mensah) is out to punish Pandora (Shannyn Sossamon), who has had enough! As fans predicted, she is ready to turn on her husband but she needs her box restored to house him. Unfortunately for Abbie (Nicole Beharie), the only way it can be made whole is by going back to the catacombs. Ichabod’s (Tom Mison) love for Abbie shines through as he allows her to make the decision, knowing everything she’s gone through after her year of solitude there.  Pandora asks Ichabod for his help and warns that The Hidden One will be at full power in 48 hours, with plans to obliterate mankind!

Ever since Ezra (James McDaniel) reached out to his daughters, I’ve been waiting to see where this is going and how he’ll fit into the ‘World of Sleepy Hollow;.  An impromptu visit from Papa Mills surprisingly finds Abbie more open to his presence than Jenny (Lyndie Greenwood), who clearly still has disdain for his decision to leave them.  Unfortunately we still don’t know if he has any idea that Ichabod and Abbie are Witnesses, though I’m hoping his connection to the secret war, as well as his role, will be revealed in the two-part finale.

Of course another moment I had been waiting for was Ichabod meeting Ezra and I felt it was well worth the wait.  As Ichabod enters spouting his usual ramblings about fast food, his demeanor quickly changes from jovial to serious and clearly very nervous as Abbie introduces him to her father.  Ezra’s parting comment to him?  “Take care of my daughter.”

One of the coolest items in the archives, is the infamous painting of George Washington’s 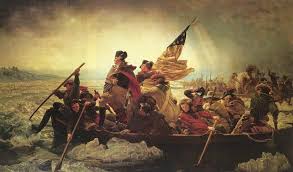 crossing the Delaware River.  This effective pivotal strategy, allows Washington the momentum he needs to win the Revolutionary War by covertly sneaking up on the British.  But unlike what’s in the history books, in true Sleepy Hollow twistory form, the real purpose was to retrieve an artifact that ultimately gives him the supernatural upper hand to victory!

In  May 1776 George Washington, Robert Morris and John Ross, all part of the secret committee within the Continental Congress, showed up at Besty Ross’s upholstery shop to discuss creating the American flag.  Though Washington initially wanted to include six-pointed stars, it was Betsy who persuaded him to the iconic 5-pointed stars instead. On June 14, 1777, the flag was finally adopted and used as our national symbol of freedom, consisting of 13 stars with 13 alternating red and white stripes, representing the 13 colonies that formed the United States. The episode also incorporates our national anthem, “Star-Spangled Banner”, written decades later by Freemason Francis Scott Key during the war of 1812. While the Sleepy Hollow twistory plays with his part in safe-keeping the flag from looters, it should be noted that he wasn’t born until 1779! LOL

In Ichabod and Abbie’s quest to locate the original flag, they run into a supernatural soldier who’s sole purpose is to protect the country’s first flag, that has a magical element.  Once again, a figure from Greek mythology is utilized in this twistory.

Betsy Ross (Nikki Reed), we will see how she fits into the crossing of Delaware and how her partnership with Ichabod ended.  Personally, I feel that Reed did a great job depicting another side of Betsy Ross that was a plausible scenario.  I do wish we had seen more of a secondary storyline delving into George Washington’s spy ring much deeper than what we saw.  However, it is my belief that due to fan’s luke warm reception, her role was cut back.

Finally, after 16 episodes Danny (Lance Gross) is finally clued in on what’s really going in Sleepy Hollow, but it doesn’t quite happen the way Abbie intended.  His realization is reminiscent of Captain Frank Irving’s (Orlando Jones) shocker after a gun fight with the Headless Horseman! Though Danny’s inauguration into the strange and stranger isn’t as epic, his wide-eyed expression, then subsequent chats with Sophie and Abbie, induct him into the supernatural fight club. Question is, what will this mean for Ichabod now that Danny, who loves Abbie, is in the know? All I will say is that Ichabod better speak up and confess his love for her…now!

Overall I liked the episode as it gives a little more character development for Abbie, Jenny and Danny, which was way overdue.  The twistory of our nation’s flag, the unique use of the Star-Spangled Banner and set up for the next episode is ingenious. Don’t worry Ichabbie shippers,  I think the writers have been building up to the moment that Ichabod will confess his feelings for Abbie. I’m sure the two-part season finale will be the “change in dynamic” (as Tom Mison put it during his interview at the MCM Comic Con last weekend) we’ve been waiting for!

*Be sure to tune in to our Hollow Hangout immediately following the east coast airing at 9:00 p.m., for our break down of the episode, as well as news in the World of Sleepy Hollow!  Missed our previous hangouts?  All are posted on Sleepy Hollow Addicts, along with exclusive interviews and videos.

*Listen to the Headless Podcast interview with Zach Appelman (aka) Joe Corbin and find out what he had to say about working with Tom Mison, Nicole Beharie, Lyndie Greenwood, Jessica Camacho and his comments about the S3 finale.

*Follow us on Twitter for all the latest breaking news in your favorite prime-time television shows: @thenerdelement, @SleepyAddicts and @headlesspodcast.

TVTalk with The Nerd Element Ep 115: Stick of Foreshadowing

Should be interesting! You’re killing me with the “take care of my daughter,” of course (which you knew you would!). I hope that Betsy will be as she was in the later episodes (which I think she will be): sober, smart, and on point (not the flirty, flippant Betsy). Here’s hoping for renewal news soon (and Crane visiting Betsy or Katrina’s grave – it would be a shame to lose Papa Mills, Joe, or any of our other current characters – too many stories to tell!). Good article!